Besides Haron Satay, Ah Hwee BBQ Chicken Wings at East Coast Park Food Village is also quite the awesome. Unlike our normal version of BBQ wings, which are marinated with dark sauce then barbecued to a juicy dark-orangish color and usually burnt on the sides; Ah Hwee’s version is crispy and dry on the outside yet succulent inside. Both versions use the same heat source though: charcoal. This photo is self-explanatory, you can feel the crispiness of the skin just by looking lol. The evenly barbecued wings with very little charred parts means you get the most meat out of each wing and also being less carcinogenic (although I don’t really believe that consuming a little burnt food would once in a while would hurt) It’s good to arrive at Ah Hwee’s stall early around 5-6pm because that’s the time they start to barbecue the chicken wings. I was glad to know I was given a batch of freshly barbecued chicken wings off the grill instead of reheating those pre-barbecued ones. Each chicken wing costs $1.20, a fair price considering the cheapest BBQ chicken wing I ever had so far in Singapore is $1.10 at Bedok. Taste wise it was of the salty variant that leaves a lingering stinging sensation on your lips, even more when dipped into the chili sauce and lime juice mixture. Nice, but I still prefer the juicy, sweet BBQ chicken wings that I grew up eating. Think Wong Ah Wah or Ah Hong. Taking something so hot and crispy requires some soft and chilling to counter the heaty sensation. And so Durian Ais Kacang from Jacky Dessert was chosen, just because I saw some other tables ordered it and it looked absolutely tempting lol. But eh, the durian syrup was too little and didn’t have too much durian ooomph in it. It was very flat tasting as well, with only one and only flavor detected – sweetness from all the colorful sugar-based syrups. There are many other BBQ chicken wing stalls at the food court but after trying a couple of them I still find Ah Hwee’s the nicest. 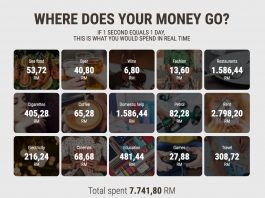 Korean Food November 12, 2015
ABOUT US
VKEONG.COM - Malaysia Food and Travel blog with reviews of restaurants, hawker and street food in KL, Penang, Melaka and beyond.
Contact us: vkeong@yahoo.com
FOLLOW US
© VKEONG.COM - All Rights Reserved