Angus House Japanese Charcoal Steak‘s latest restaurant opened at Publika not long ago and it is already drawing a crowd of customers, which is quite an opposite scene compared to their old location at Pavilion. Maybe that explains the reason for them to relocate their business.
Speaking of Publika, it has had its fair share of bad publicity recently due to a robbery incident involving a lady that gone viral on Facebook. Just so we are clear, I am not posting this to promote Publika (even though I have written quite a number of Publika restaurants in the past) Be extra careful where ever you are, avoid walking alone and always have a friend accompany you always – especially if you are a lady. Now that being said, I am not going to elaborate much about this visit because everything was great from start to end – both food and service wise. And even though the prices are on the steep side, I felt it was worth paying for and we left as satisfied customers. Needless to say the steaks are cooked perfectly, good enough for me to overlook the sauce which I think did not marry well with the meat. I like the fact that they offer a set menu here. It does cost a little more than having the steaks a la carte but you do get to enjoy a full course consisting of appetiser, soup, salad and dessert. Usually the other items that come in a set are quite crappy but they were surprisingly good especially the dessert.
Also, do note that the prices shown for the food we had are based on the set menu. My Black Angus Tenderloin @ RM157. This is a 300gm steak, which is also the largest piece available for the cut. Tender and juicy as expected from a tenderloin, satisfying to the last bite. The only thing I disagreed was the sauce that I mentioned earlier. SL’s US Cod Fish @ RM109 – Perfectly grilled, the flesh’s delicate and flaky texture were still well maintained. Now for the other not so important things.. I don’t know if the appetizer changes from day to day but we had this grilled chicken with wasabi sauce on mashed potato. Surprisingly good and they could actually turn this into an entree if they want to. Now about the dessert I am pretty sure it varies daily, because we were told that it was some chocolate cake but then it turned out to be a pear cake instead. I ain’t even disappointed because chocolate cakes are so common, I would definitely want to try a pear cake instead. It had a refreshing taste, very special for a cake and we enjoyed it. We just wished the slice could be bigger. 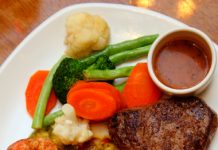