Wow, it’s been a long time since I last blogged about dim sum. This time, we are going to take a look at Ful Lai Dim Sum Restaurant in Bandar Manjalara, Kepong.
Actually, my first visit to Ful Lai was a midnight about a year ago (you know the sudden crave for steaming hot dim sum in the middle of the night right? lol) but my clumsy fingers accidentally erased the whole memory card along with some other nice food photos, sigh. Since we found the dim sum to be quite tasty, we returned for another try.

Sadly though, we found the dim sum not as nice as the ones we tried the first time. Maybe the midnight hunger does trick your mind into believing that the food taste better haha. The Siu Mai didn’t really taste nor even look like Siu Mai.. more like meat balls to be honest.

Although all the above dim sum look different, they all tasted very similar – almost the same to me. Besides the appearance, there’s nothing special about them to distinguish them from the other dim sum. Quite disappointed actually. The dim sum above cost RM3 each, also the normal price for the other restaurants in this area.

Another reason I returned to Ful Lai was to try their Char Siew Bao, said to be the best in Kepong by some in the forums. Having been disappointed with the dim sum we had earlier, we were hoping the Char Siew Bao would be the saving grace.

But too bad the Char Siew Bao didn’t make the cut for us as well. Nevermind the bun didn’t have the conventional Char Siew Bao exterior (slightly open in the middle), the pork filling was dry, had a coarse texture and tasted a little bland. Definitely not the best Char Siew Bao in Kepong if you ask me. I like my Char Siew Bao pork filling to be juicy and mixed with some fats, those that can melt in your mouth haha.
A better Char Siew Bao better one I had was at a restaurant beside the Kepong market, which was waaaaaaaay better (better than Tuck Kei too!)

After this I think I won’t be returning again, unless I have the sudden midnight crave lah, then I got no choice lol. Hmm maybe I should pay the other Ful Lai branch at Jalan Kuchai Lama a visit instead. And as of now, the best dim sum restaurant with good variety in Kepong for me is still Eden. 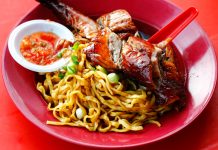