The Penang Pork Noodles aka Chee Yoke Fun at Restoran Pomander is perhaps one of the best known hawker food stall at SS15 Subang Jaya. Whenever people talk about SS15’s food, either this or the famous SS15 rojak van would be highly recommended. It is said to be highly inadvisable to come during lunch hour because during the peak it would take more than an hour for your pork noodles to arrive. Which explains why most customers either have a newspaper in hand or a laptop turned on to past time. Even when I was there at 2pm the noodles took about 40 minutes to arrive lol. Actually the long waiting time is justified because the cook prepares each bowl individually. Plus, he has no helpers other than those who help him to take orders and deliver the noodles. For RM4.50 (the minimum price) you get a fairly large bowl of pork noodles with lots of ingredients thrown in like minced meat, pork liver, sliced lean pork, vegetables and the ever sinful deep fried lard cubes.
With high expectation in mind, I was not really impressed with my first mouthful of the noodles. It was not until I had a sip of the soup with some minced meat, then it hit me – the pork noodles is actually very delicious for the rich, flavorful porky soup. And I bet the flavor was derived by simmering huge amount of pork bones for long hours. I tried to snap a closer photo of the stall but was disallowed by them for unknown reasons. So if you look at the lower right corner you would notice a stall with green words, that’s the famous pork noodles stall at SS15! Seriously porkilicious, good stuff. But parking and waiting time on the other hand, are the bad stuff. So come early to minimize any possible frustrations. 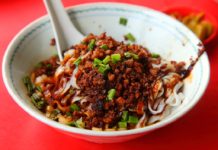 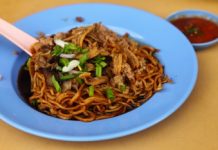