One of the famous lunch places in Kelana Jaya area is Kee Kee Bentong Chicken Rice. I travel up and down LDP very often but never noticed its existance until my friends told me about it. I don’t know about you, but I would have never expected a normal looking seafood restaurant like Yat Yeh Hing to house a good Chicken Rice stall. We reached around 12.15 pm and apparently it was the busiest time – it was almost full house. There’s even a queue to get the soup lol. From the other blogs, it is said a quarter of a chicken’s portion is the minimum order. But since there were four of us, this wouldn’t be a problem. So we ordered a combination of steamed and roast chicken.
If you noticed, Kee Kee’s chicken is bigger in size with yellower than usual skin, that’s because the birds used are claimed to be corn-fed. And although the chicken was chopped into big pieces, it was still tender and juicy, even the breast meat! I really enjoyed it. I think the secret is to not fully cook the chicken, this is pretty evident from the meat’s slight pinkish color and the trace of blood visible in the bones. The bean sprouts was normal, huge portion though. Kee Kee’s other famous dishes are fried and chicken gizzards, intestines and the ‘Glass Chicken Feet’ – a jelly like dish made of chicken feet, which is said to be cold and tastes sour. But that day none of us were feeling adventurous enough to order any of the dishes mentioned, lol. The chili sauce was great and went very well with the chicken rice, we had seconds. Shown here also is the ‘Sha Lei’ drink, or more known as Umbra juice to us Penangites, a very sour and addictive drink. The roast chicken was equally good as well, just not as juicy as the steamed ones. When we arrived, the stall was hung full with steamed chickens. And this is what was left when we finished our meal.. about 40% only. The chicken was selling like hot cakes and really showed the briskness of the business. Waiting time can be long when they’re busy so do come early to avoid this situation. If you tried any of the ‘interesting’ dishes, do let me know what you think about them ok? At the moment, just the chicken rice will do for me lol. 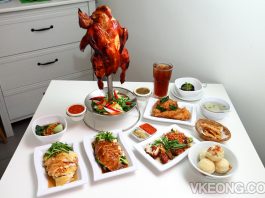 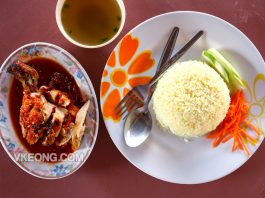 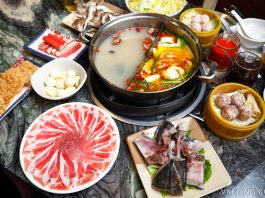 Steamboat July 28, 2017
ABOUT US
VKEONG.COM - Malaysia Food and Travel blog with reviews of restaurants, hawker and street food in KL, Penang, Melaka and beyond.
Contact us: vkeong@yahoo.com
FOLLOW US
© VKEONG.COM - All Rights Reserved