Lai Foong Restaurant on Jalan Tun HS Lee is one of the most popular places in KL for beef noodle. For people who are driving they would usually park their cars at Central Market and take a short walk to the restauraunt. From my own experience I have never had any problem looking for a parking spot there and the rate is quite cheap too considering it’s KL. It starts from RM2.50 so it is still very bearable. This was actually my first time here after hearing so much about it from friends who have patronized this stall since they were small. And of course I know the standard has dropped compared to last time. Nevertheless, I was still keen to give it a try especially given their fame and long history as one of the oldest beef noodle in town. I had the dry version and found it disappointingly bland and flat tasting. Given that I skipped breakfast and was feeling extremely hungry but yet did not finish the noodles, it’s a really bad sign.

The chilli sauce is fiery spicy as you could see from the huge amount of chilli seeds present even in one small serving. I was hoping that the chilli sauce could give some zing or kick to the noodles but then they just don’t go well together, which is kind of weird. Luckily the soup was a saving grace, it was tasty and had an appetizing flavor derived from the pickled vegetable. RM8 for the noodle inclusive of the soup with added beef balls. The soup version fared better in comparison but the stock is clearer and slightly diluted in taste. RM8 for this as well. There are three cooks here and I think they take turns to be in charge. They never even bat an eyelid when I tried to photograph them in action, must have been used to the limelight. Honestly? I think Lai Foong beef noodle is far from being impressive in my books even though I was quite pleased with the soup’s flavor. I don’t know how good it was in the past but I am guessing the standard has just really dropped over the years. So, I think you can give this beef noodle a miss. But then if you are curious and got discouraged by me, you could still give it a try just for the sake of trying. For me, one try is enough considering there are plenty other better beef noodles out there. 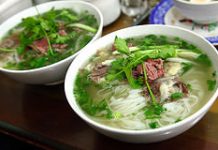