Kolo Mee could very well be the most common food in Kuching – probably even true for the entire Sarawak. You will find it being sold for breakfast, lunch and dinner at any every nook and corner may it be a coffee shop, food court or restaurant. Most Kolo Mee in Kuching are served with minced pork and char siew as the main topping, thus rendering them non-halal.
However, there are some halal eateries that managed to come up with their own version called Mee Sapi – with beef used as the substitute for pork. Having tasted both versions, I am glad to say the halal version is just as good, if not better than some of the non-halal ones. Said to be one of the best in town, Sepinang Sari Cafe & Restaurant (also known as Haji Salleh) at Jalan Satok is one of the places to hunt for halal Kolo Mee. But before you venture into this popular eatery, do expect considerable waiting time for both the available seats and food. The latter is largely because the cook has to do almost everything from preparing the noodles to toasting bread to collecting payments and even delivering the food. Besides the normal Mee Sapi @ RM4.50, there are also the special edition (shown above, with a serving of sweet soup with fatty and tender beef tendons @ RM7), Mee Sapi Tendon @ RM8 and Mee Sapi Tendon & Tulang @ RM9. They are slightly more expensive than what you’d get in other places but then the difference is not really that much to be worth complaining about. In fact I have seen special Sarawak Laksa being sold at RM8 and RM9.

As for the taste, the noodle did not disappoint. It is not too oily and is as appetizing as its non-halal counterpart. I’d have to admit though that beef slices are hard to match the originality of minced pork. But still, they are quite delicious for a substitute. Lastly, I don’t really agree with the use of bean sprouts because of their overpowering taste, especially the raw ones. Kolo Mee usually does not have bean sprouts in them so my suggestion is to omit them in your order. And like most coffee shops in Kuching, Roti Kahwin @ RM1.20 is also available here. It is nothing but a crunchy toast spread with kaya and butter – but with a twist of saltiness. Recommended just for the sake of trying. 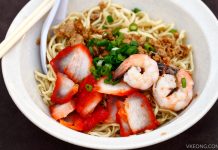