Yup you seen it right, it’s RM271.20 for a bowl of cendol. It was my most expensive cendol ever and I have only myself to blame. After placing my order and while walking towards my seat in the food court behind the cendol stall, my camera bag slipped off my shoulder and dropped on the cement floor.
Although I carried my bag really low about two feet from the ground, the impact was strong enough to damage my 50mm lens so badly it was rendered useless – partly thanks to the plastic build. Oh well, lesson learnt, gotta put more padding in my cheapo camera bag and carry it with more care. I have heard many good stuff about this cendol stall operated by an Indian family just opposite Peng Bin primary school at Bukit Tengah. Some even commented that it’s so good it’s better than the famous one at Penang Road, which in my opinion is already very awesome. So, I just gotta give it a try and verify the claims myself.
Well, the good thing about the cendol was the bigger portion and a lot of the green starch ‘noodles’ was given. Other than that it was pretty normal tasting and personally, I feel it wasn’t even comparable to Penang Road’s.
And if you noticed, the green ‘noodles’ was fatter and shorter with a pretty bad texture too – being stiff and taste mushy when the teeth sunk in. The desired jelly feeling just wasn’t there. If you were a Peng Bin student then you would know about this cendol stall. For RM1.20 a bowl I know shouldn’t be expecting too much but I had high hopes due to the many recommendations. Takeaways cost extra RM0.30 for each packet. Map via Wikimapia
In case you are wondering, I went and buy a 50mm replacement the next day in Penang, which cost me RM270. Luckily the old one had served me at least a year before retiring permanently so I was not that heartache lol. 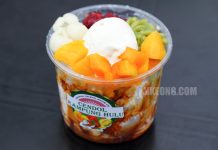 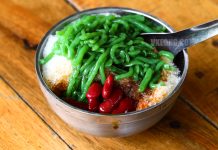