I have been reading about Tenji’s Japanese Buffet at SohoKL, Solaris Mont Kiara recently. It seemed like an deal too good to miss out for only RM49.90 for the full session. Being hooked on Japanese food recently, I am going to try it later this month before the luncheon buffet promotion ends.
But, first I need to find out how to go to SohoKL. All I know about Solaris Mont Kiara is that you would surely see it if you’re traveling in and out of Kuala Lumpur via the highway. It is so huge you won’t miss it especially when it’s lighted at night, just like a bigger and better version of Autocity. Yesterday, we finally found the way to SohoKL via Sri Hartamas and had dinner at Ole Ole Bali shortly after that. Our choices were limited because it was New Year’s day, so many shops were closed. Since Ole Ole Bali is a sister restaurant of Bumbu Bali (they are owned by the same management), the menu is very similar and perhaps too familiar for a long patron of Bumbu Bali like me. Most of the food on the grilled and main courses menu have been tried and tested except for seafood. So, as an attempt to try something new, I had a Seafood Platter @ RM32 The Seafood Platter comes with a very generous portion of Grilled Dory Fillet, two fresh prawns and squid. Side dishes are a bowl of salad, some spicy fries and a slice of juicy, sweet watermelon. I think you could easily make out the prawns.. so the dory fillets are at the bottom, while the squid is that one piece sitting on top.
When Ole Ole Bali says generous portions, they really meant it – there were three dory fillets! Taste wise, the grilled seafood is lightly seasoned to put more emphasis on the natural, fresh flavor. But, if you like your food with a stronger taste, the brown sauce provided does a good job in enhancing the flavor. Next up was a dish from the Balinese Specialties menu, Ole Ole Trio @ RM38. Concept wise, it’s something like Chili’s Triple Play – to gather some of the nicest starters into one for sharing among friends, especially drinkers.
It has a combination of Ole-Ole BBQ Wings, Sate Lilit and Cumi-Cumi Goreng that are served with Sambel Matah (Lemongrass sambal), Sambel Terasi and Tartar sauce. The spellings are a bit different but I think any Malaysian should have no problems understanding them.. Sambel obviously stands for sambal.. sate is satay and so on. Among the three starters I liked the Cumi-Cumi Goreng (deep fried squid) the most. Fortunately, Cumi-Cumi Goreng is available as a standalone dish for less than RM15 so I am definitely going to order it again in my next visit. By the way, I was kept reminded of Cumi & Ciki when I saw this, lol. The second best for me was the Sate Lilit, which is basically barbecued mix seafood paste wrapped around a lemongrass stalk. Meant to be dipped into the very spicy Sambel Terasi, they are very good with a soft, unique texture. It could be somewhat salty, depending on your palate. And I noticed that lemongrass is heavily utilized at both Ole Ole Bali and Bumbu Bali, from lemongrass marinated prawns and meats to authentic Balinese drinks.
The Ole-Ole BBQ Wings are not bad, but I found nothing special about them either. Or it could be because they were overshadowed by the two earlier and better starters. Another Balinese Specialty we had was Ayam Betutu @ RM25, described as Balinese Roast Chicken with Lemongrass Marinate. Besides half a roast chicken, yellow rice, sauteed kangkong, traditional Balinese crackers and a few other condiments are also included in this dish. As you can see, the portion is so huge that I would only recommend it to those with monstrous appetite, lol. Or, you can also share it with another friend. A jug of barley lime cost RM18 and can be shared among three to four people. Considering a cup of it is already RM6, the three of us decided to order a jug instead for value reasons. There are a few beers and Balinese cocktails to choose from if you’re a drinker.
Before I took this photo, I contemplated whether to wipe off the water next to the jug because it looked ugly. But what the heck, I don’t have the time for that lol. So many delicious looking food were in front of me and all I could think of was to start eating as soon as possible. The outlet here has two floors and a pretty huge dining area outside the restaurant (smoking area) And if you are sitting on the ground level then you could have a full view of the kitchen in action. At the sides are some unique seating area with cushions and pillows provided. We actually sat here during the entire meal. It was quite a nice experience but it wouldn’t be suitable for children. If you are looking for a brighter area (for nice photos too) then the second floor is a good choice. One last photo of our Seafood Platter. Now, the grilled dory fillets are clearly visible. Judging by the number of international restaurants at Solaris Mont Kiara, it is indeed the next happening place for dining. And the best thing for me is that it can be reached from Kepong without having to pay any tolls. Ah, Tenji Japanese Buffet, you’re next on my visit list, haha! 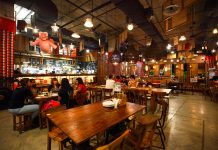