The food I had the most ever since coming to Singapore must be Katong Laksa. It is easy for me to like Katong Laksa because of its small resemblance to Penang Curry Mee. For first timers, Katong Laksa has a much thicker and creamier coconut milk based soup and noodles that look like those used in Assam Laksa. In Melaka, this is more commonly known as Nyonya Laksa.
Katong Laksa is extremely popular in Singapore and you can find it at almost every food court. I have tried many stalls of Katong Laksa in the east of Singapore, with some heavily recommended by the locals. Among those that I have tried, Marine Parade Laksa or Janggut Laksa at Bedok is the nicest tasting one for me so far. It is also widely known as the Original Katong Laksa. Katong Laksa uses a slimmer version of Assam Laksa noodle (or a thicker version of bee hoon) and is always served with bean sprouts, sliced prawns, grounded laksa leaves and the optional cockles and sambal chili paste.
For me I always add at least one spoonful of the sambal chili paste to give it the desired kick. The end result is a very creamy, coconut-milkish and gritty (dried shrimps) curry gravy that is quite addictive. Although the gravy is thick, I didn’t find it ‘jelak’ at all unlike the rest. I think there are a number of people who don’t like cockles because they taste quite raw. So when ordering the question of whether you want cockles or not always comes up. I actually had mine with cockles but they were pretty hidden under the soup.
Janggut’s Laksa has four signatures that separate them from the rest. First, it must be served without chopsticks. Secondly, the bee hoon is cut hence short. Thirdly, they use a self made coconut husk scoop (which I did see them using) and lastly, only fresh coconut milk is used. Katong Laksa connoisseur will claim that it should be eaten without chopsticks. So to make it possible for eating Katong Laksa with only a spoon, the noodles is first cut into shorter legth using a pair of scissors. Besides that, it is also said that Katong Laksa served with spoon only will always taste better.
Well I found that this is not entirely baseless. Because when you use a spoon, you will also scoop the curry gravy and eventually each mouthful is more flavorful. By the time you finish the noodles, you will also realize the soup is almost finished as well.
After all that being said, here I am showing a bowl served with chopsticks lol. But I assure you it is authentic. This is actually a branch of Marine Parade Laksa, located at the food court at Blk 128 Bedok North Street. I have tried the main branch at Roxy Square but found the Bedok’s branch to be nicer for me. To reach here by public transport you simply take the MRT, alight at Bedok station and take bus 222 that will stop opposite Blk 124 (4 stops later). Walk towards Blk 128 after that. 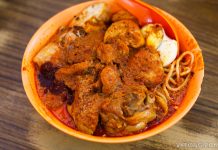 Candies from China and Japan