Tatsu Japanese Cuisine, one of the most established Japanese restaurants in KL has recently added a number of dishes to their dinner menu.
The newly launched dishes aim to bring a sophisticated twist to the traditional Japanese fare by fusioning classical ingredients with creative plating and modern cooking approach. 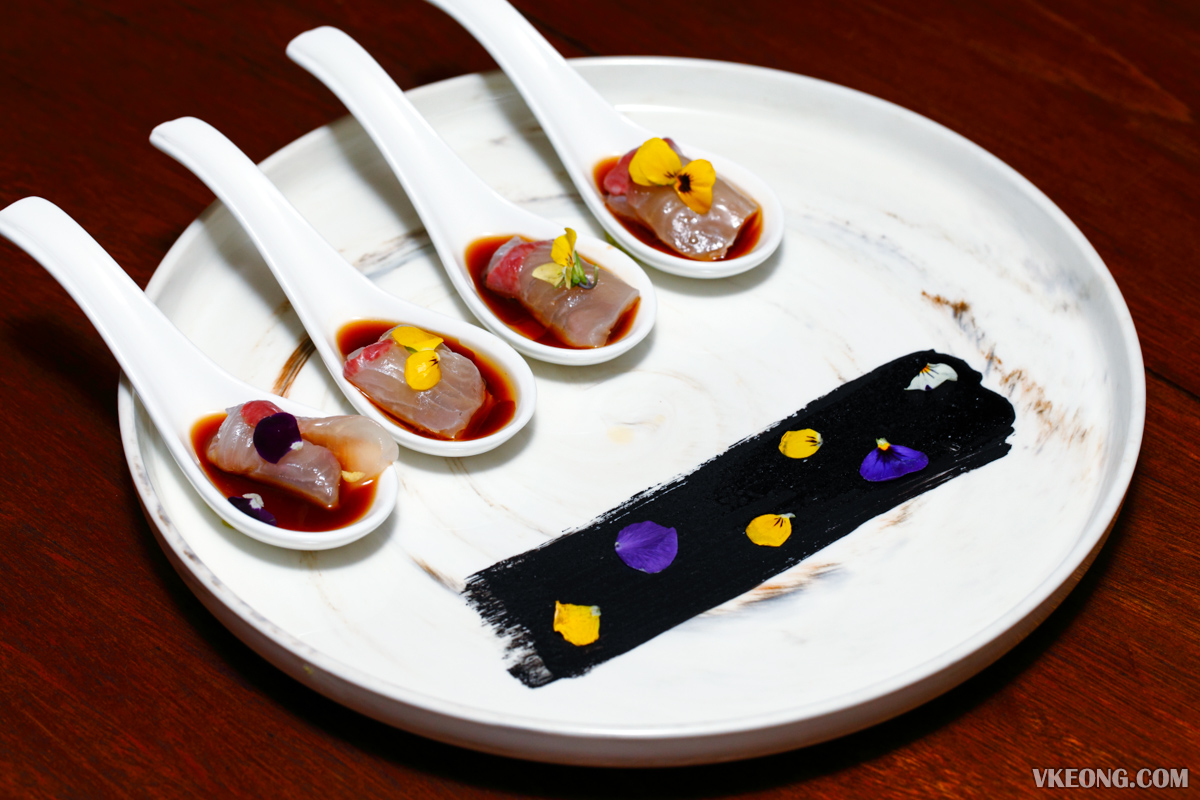 New Style Sashimi with Yuzu Soy and Heated Sesame Oil @ RM48. Each serving comes with four slices of the freshest sashimi topped with edible flowers served in individual spoons like a canape. 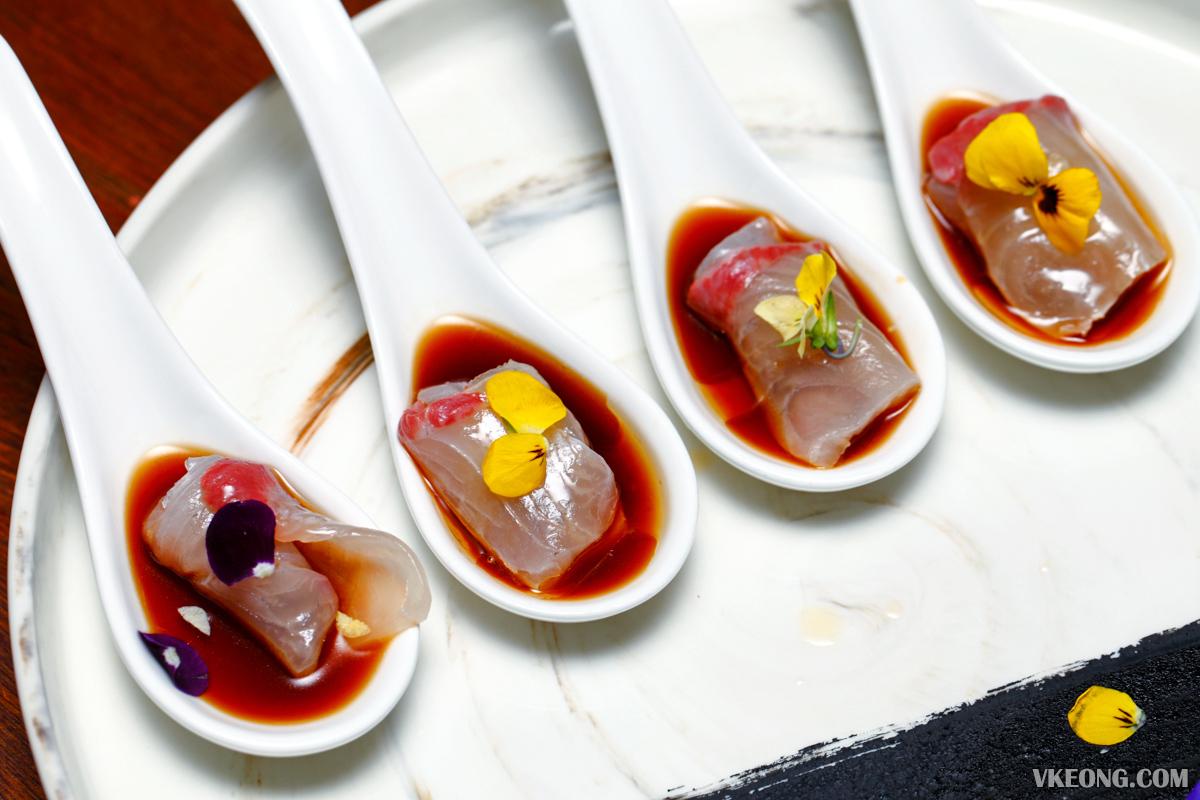 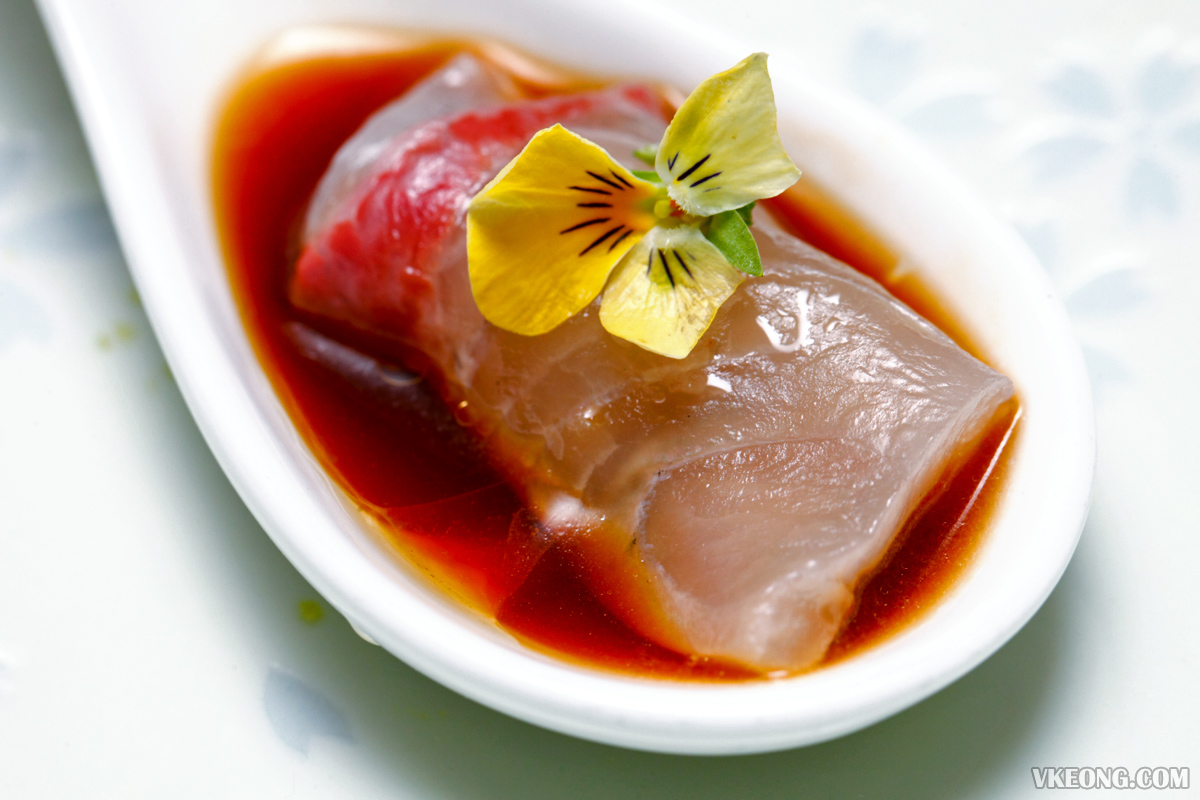 The yuzu infused soy sauce and sesame oil gave a touch of citrus and nutty aroma to compliment the sweetness of the fish. It’s an interesting approach to enjoy sashimi, though I would still prefer the sauce to be served separately. 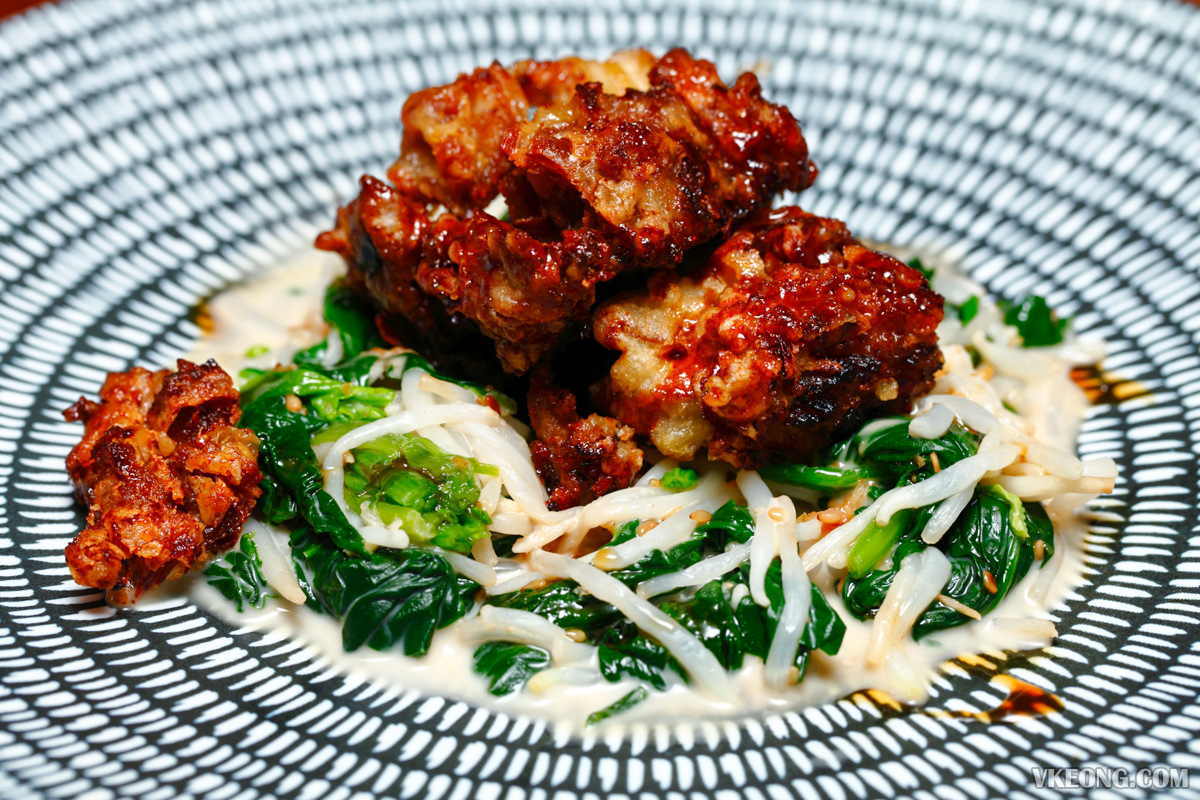 Duck confit is almost unheard of in a Japanese restaurant, but you can expect it at Tatsu. Here, the duck confit @ RM47 is given a karaage treatment and deep fried to a crisp. Only succulent duck leg meat is used so you can be assured of a juicy bite.
Surprisingly (and thankfully), it was not as salty as the usual confit. We also liked that it was served on a bed of chilled sprouts and Japanese spinach to balance out the fried fattiness. 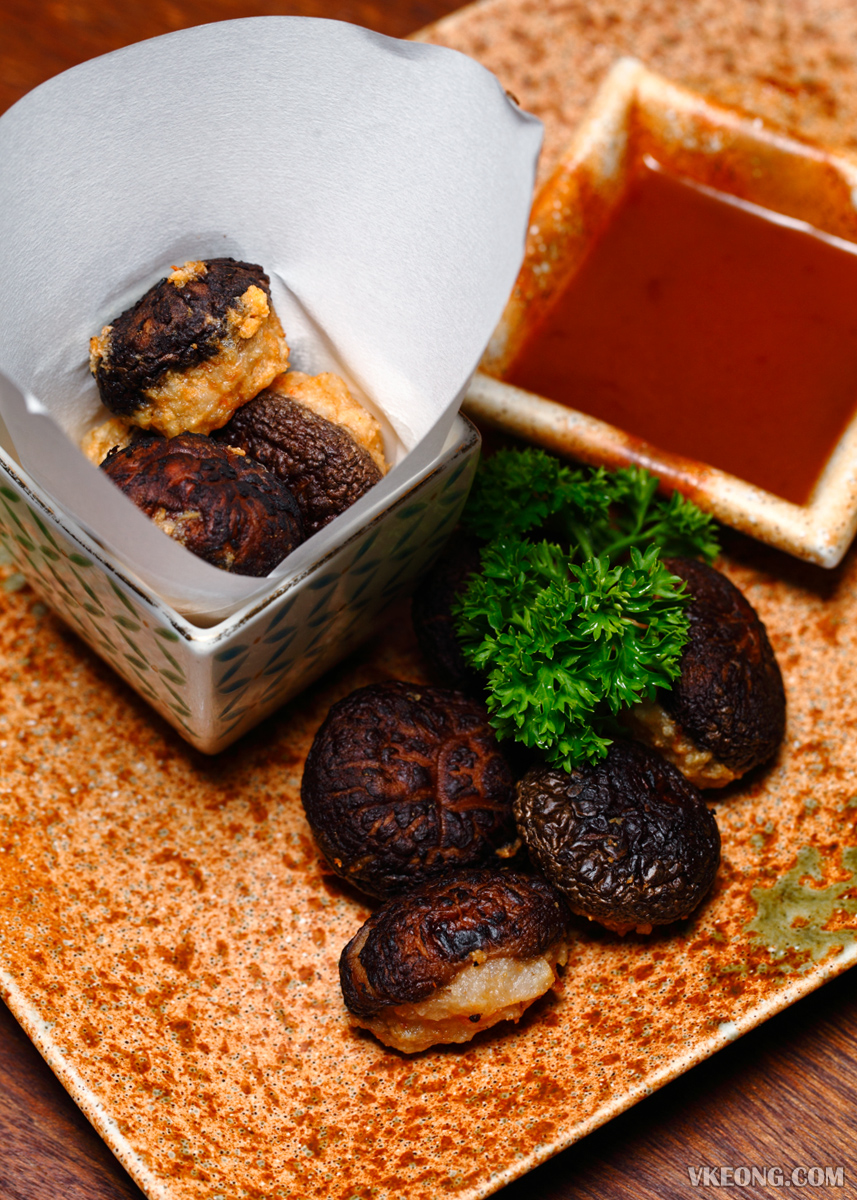 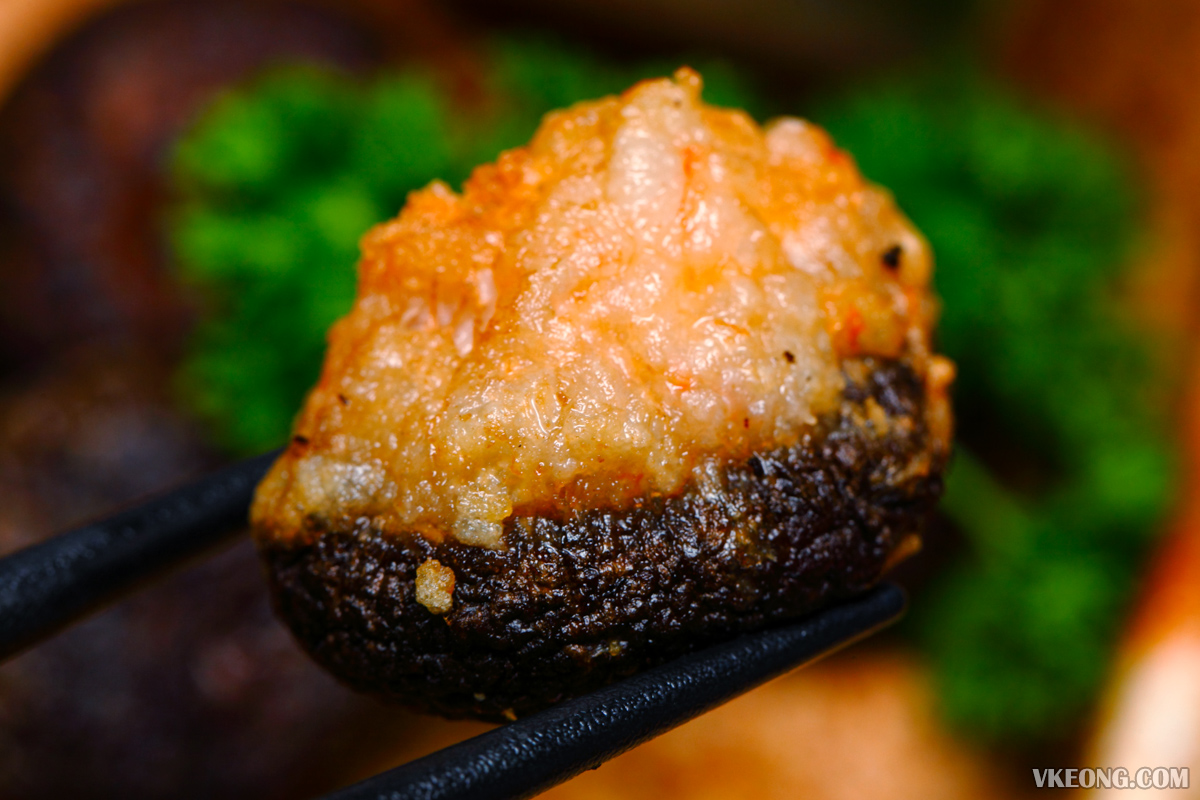 Next, Shrimp-Stuffed Shiitake Mushroom with Butter Ponzu @ RM38. These morsels combine the sweetness from the shrimp with the rich flavor of mushrooms. Dipping them in the tangy butter ponzu just improves the marriage. 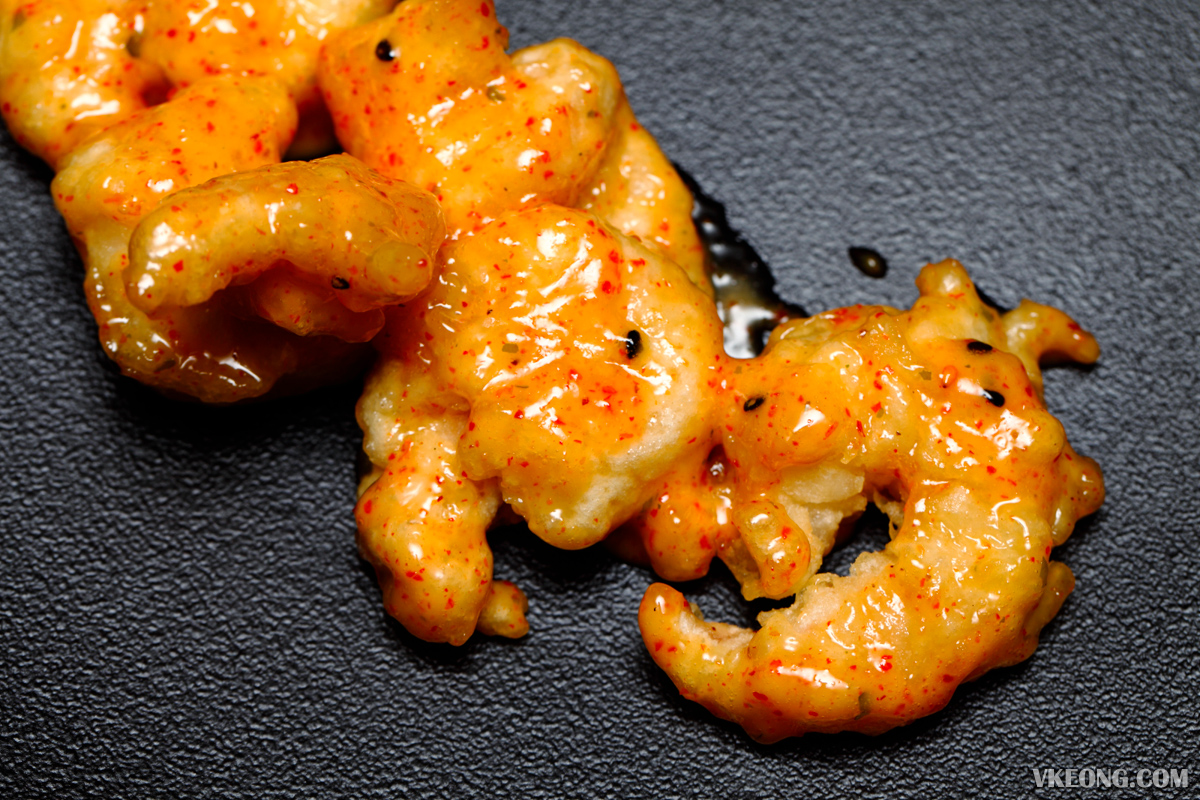 For something tantalizing and exciting, you won’t go wrong with the Rock Shrimp Tempura with Creamy Chili Garlic Sauce @ RM98.
The firm and nice shrimps were covered in tempura flakes which give a satisfying crunch as you bite into them, while the sauce packed a powerful punch of flavor with just the right amount of heat. 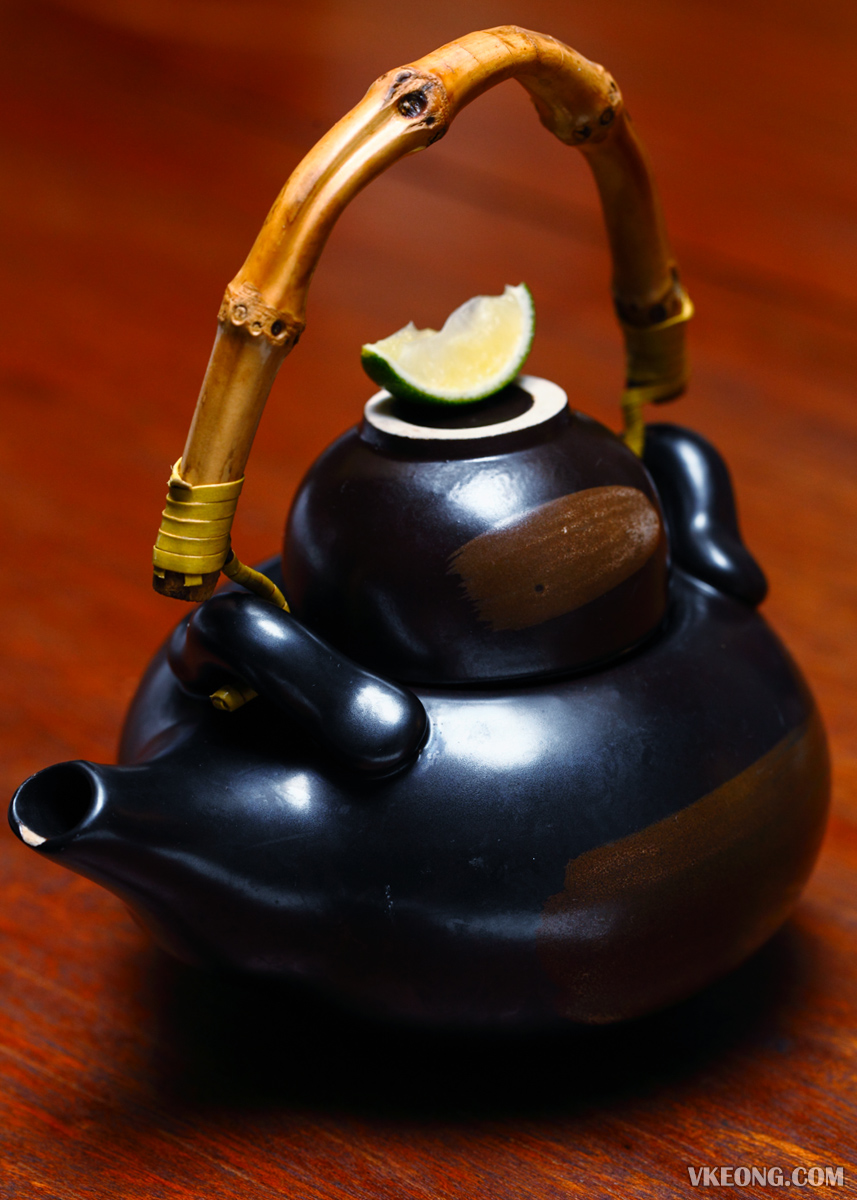 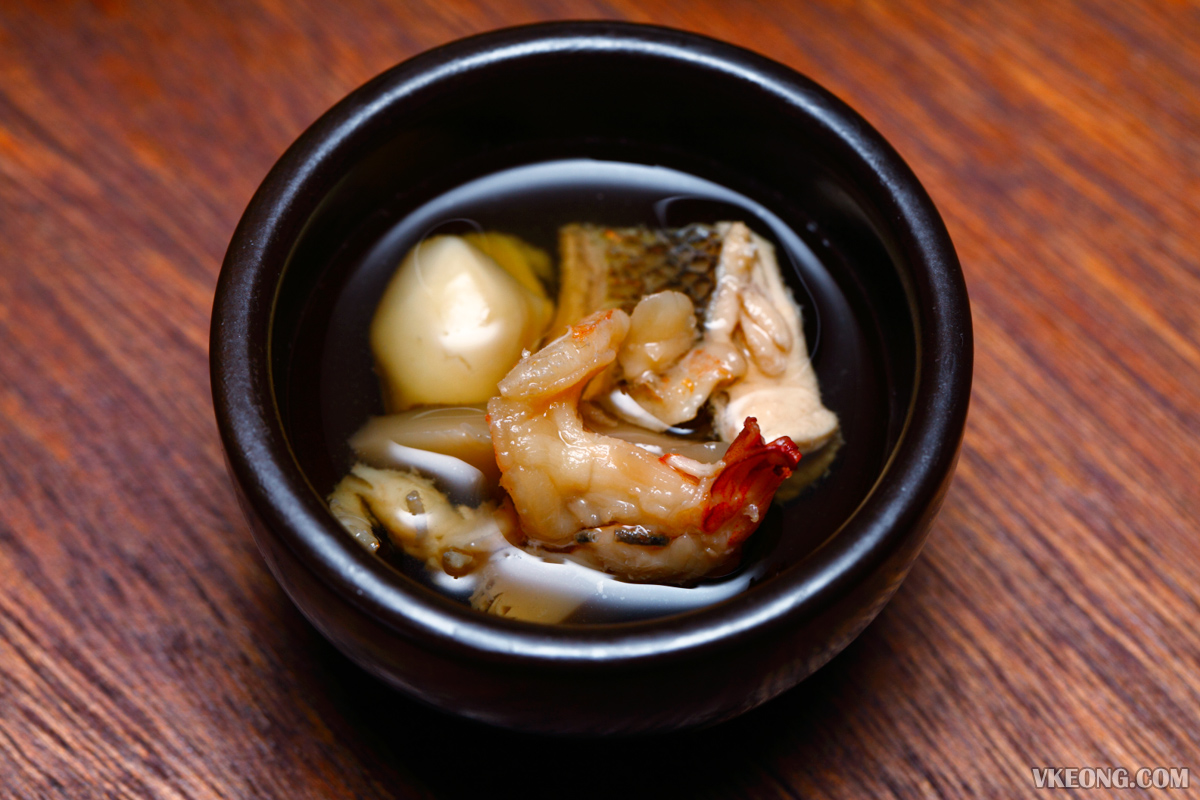 Dobin Mushi Broth @ RM35 was a nice palate cleanser before the entrees. The seafood broth tasted light and sweet and extra refreshing with a squeeze of Japanese lime juice. Try it with and without lime to see which you prefer. 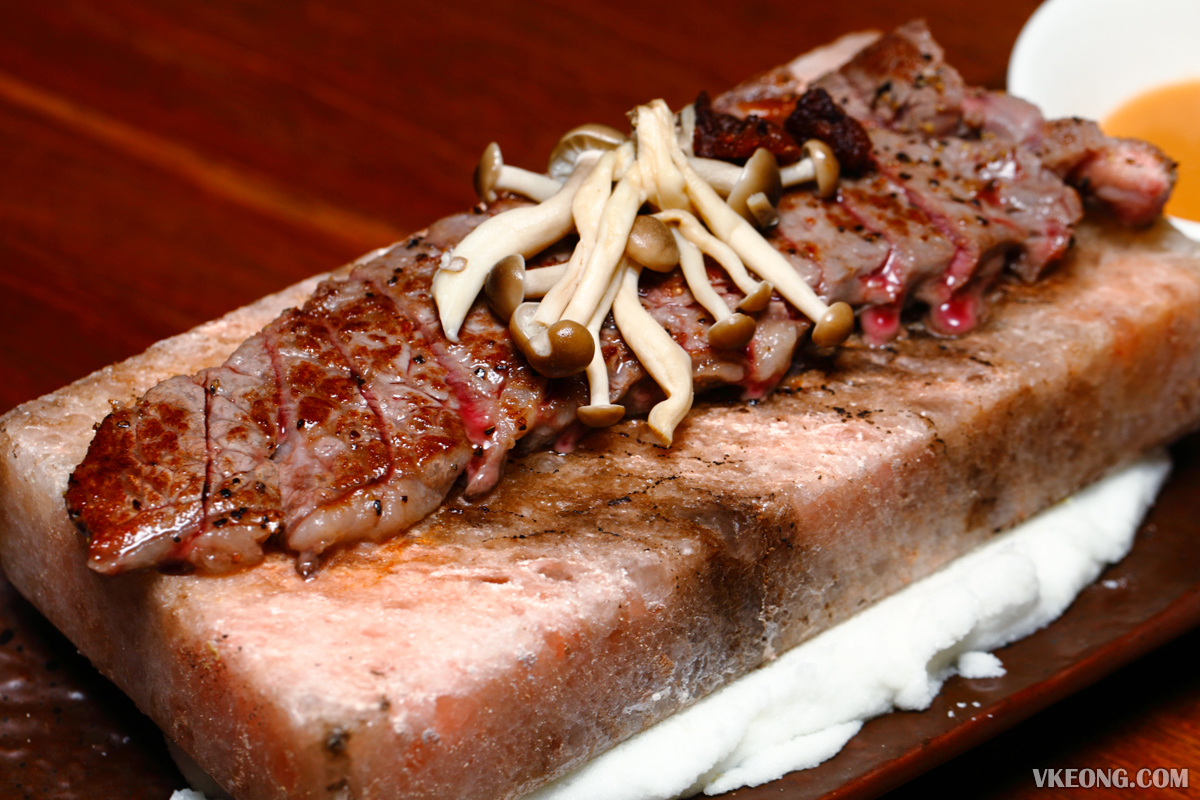 The Australian Wagyu Beef on Heated Himalayan Rock Salt (200gm, RM420) had got to be the highlight of the night. It arrived on the table still sizzling and you can see the beautiful slab of beef continue to cook right in front of you.
You are recommended to enjoy the steak while it’s still pink and you have about 30 seconds to transfer the slices of beef to your plate. The wagyu beef you get has a marbling score of 8 at the least, so the meat is amazingly tender and flavorsome. 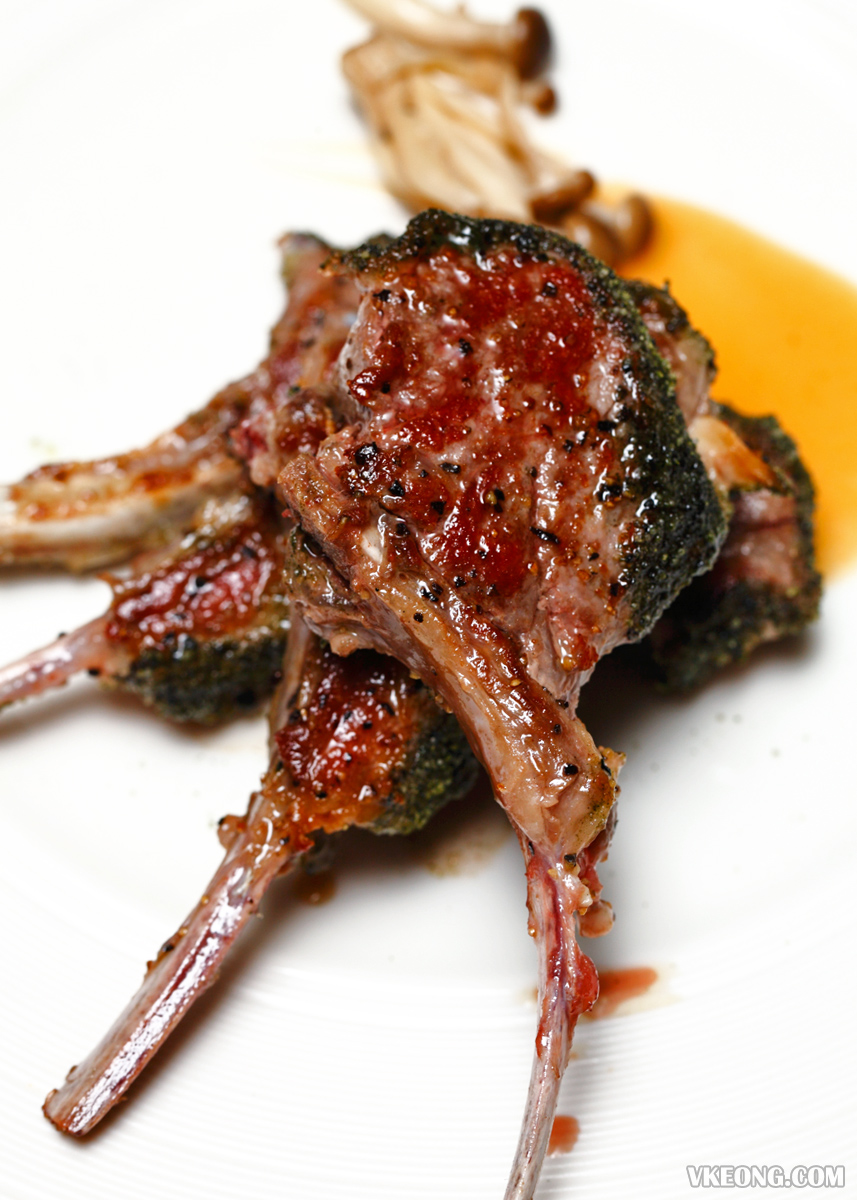 Personally, I found the presentation of the Green Tea Salt Crusted Lamb Chop somewhat underwhelming compared to the other dishes we had. That said, the lamb chop was undeniably delicious, albeit the natural saltiness of the green tea salt was quite intense. It was an easy fix though, just scrape off the excess salt from the crust. 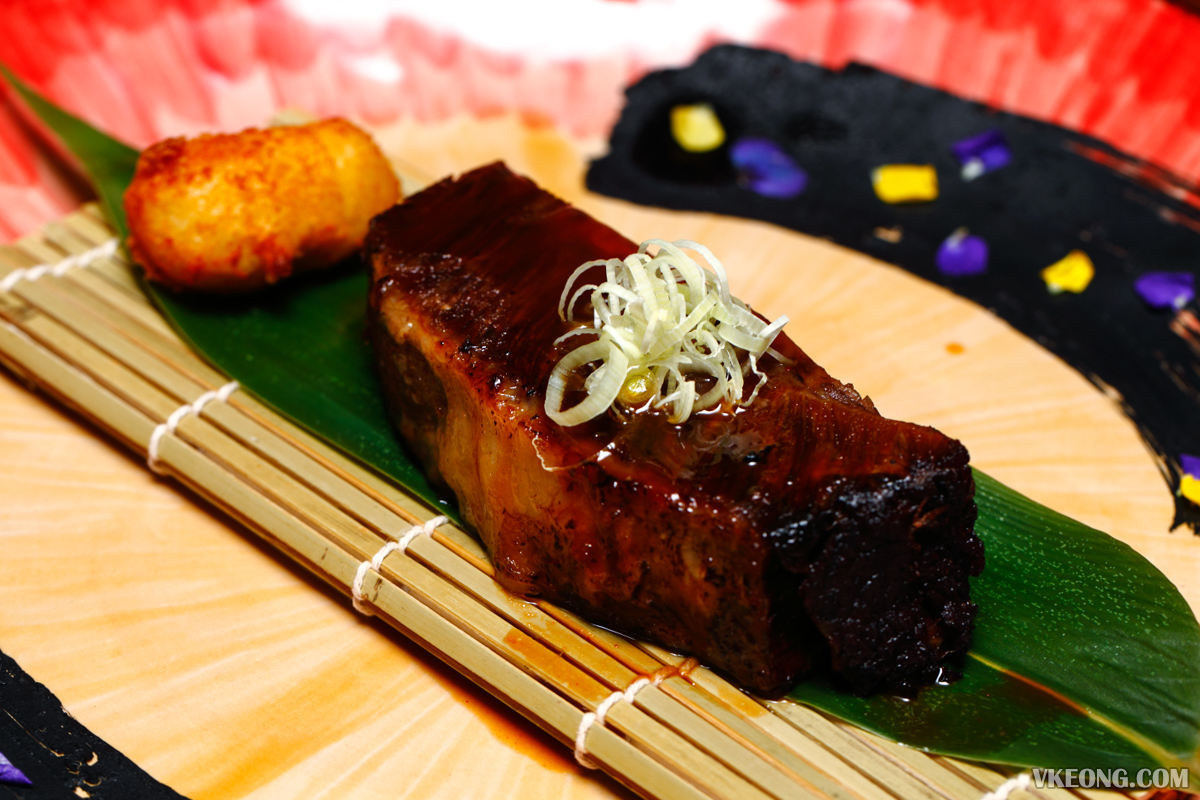 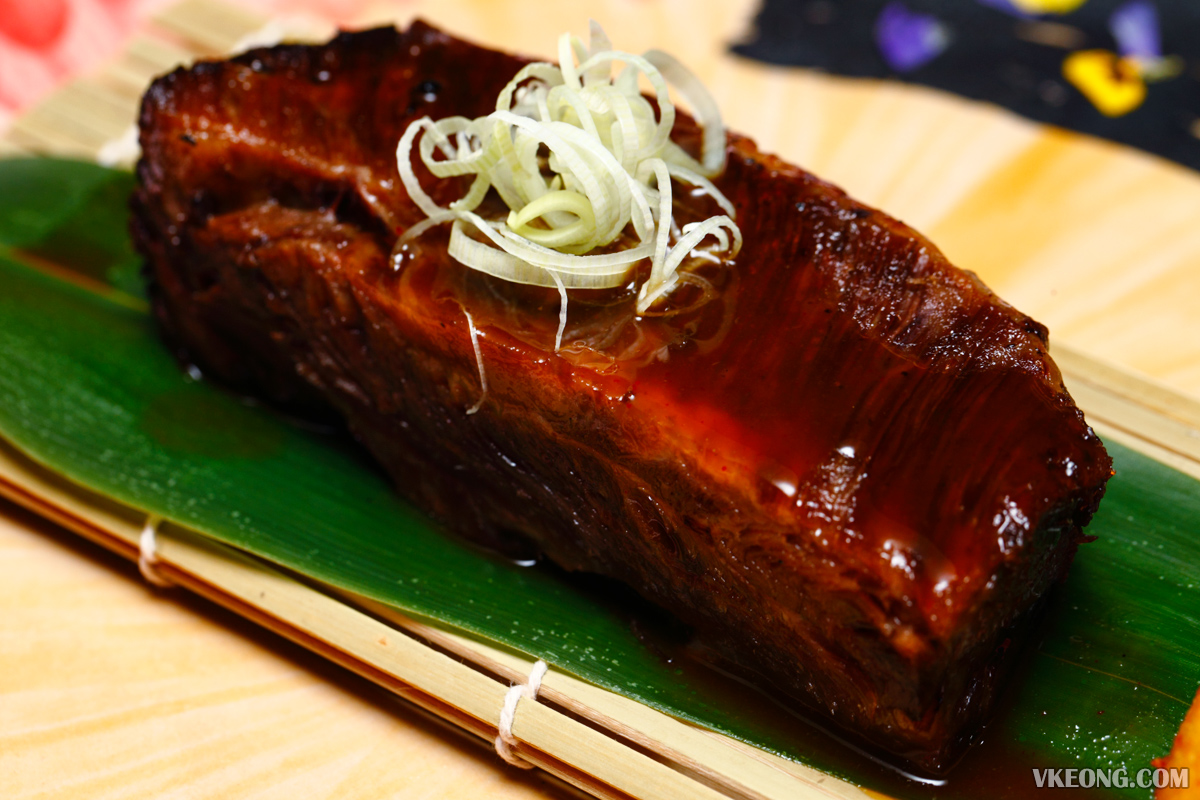 Satisfy your craving for a comforting yet hearty fix with Tatsu’s Slow-Cooked Beef Short Ribs @ RM98. Savor the peak of flavor of the fork-tender short ribs after being slow cooked for more than 10 hours and finished off with a sexy glaze of garlic barbeque sauce. So good, you wouldn’t want to share! 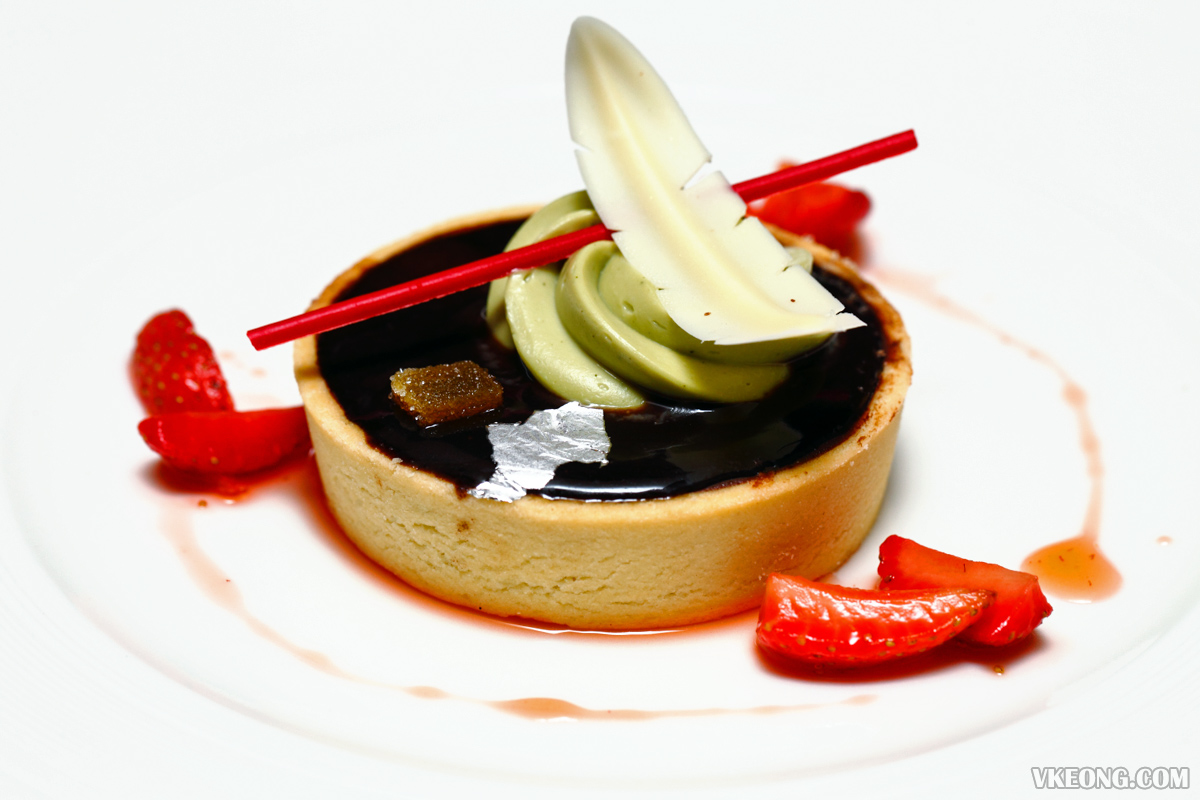 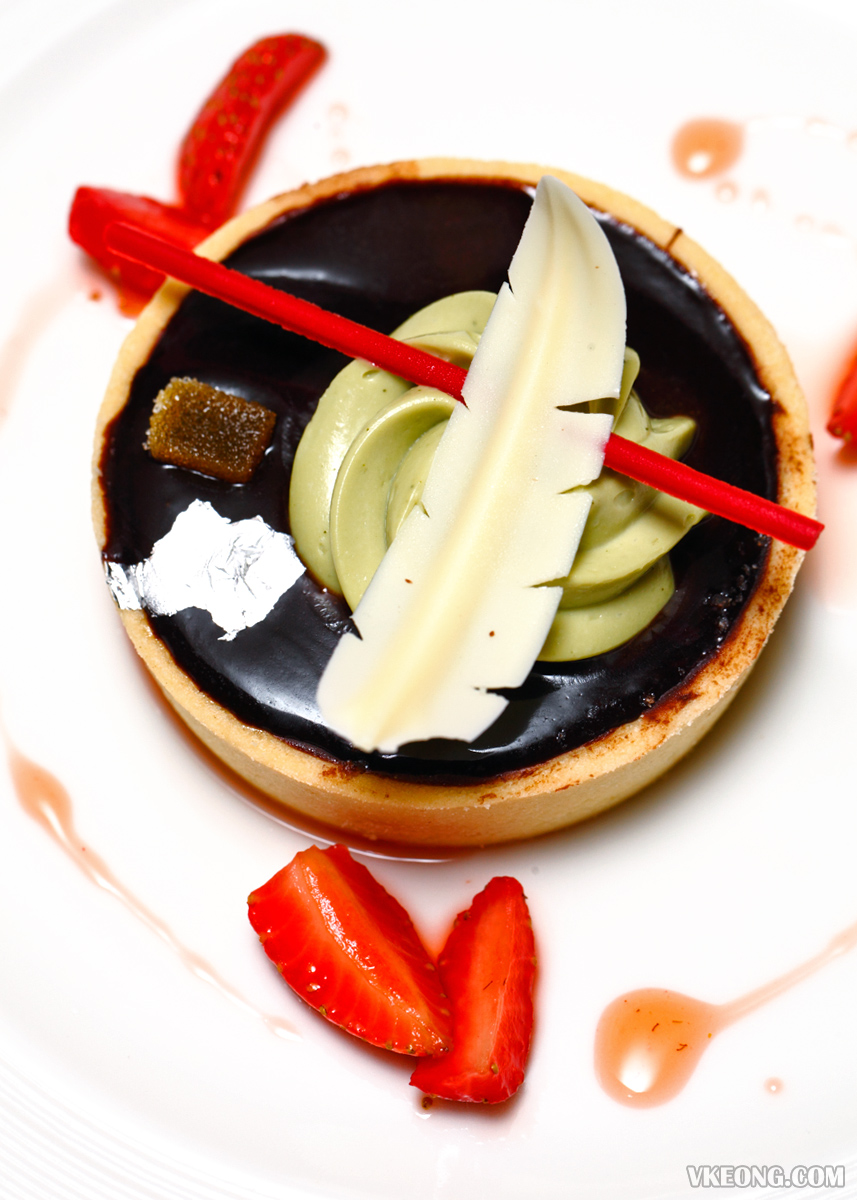 For dessert, we were treated to a decadent chocolate tart (RM35) with a subtle citrus note. The dense dark chocolate had a infusion of yuzu which offered a great accent whilst making it less cloying to the palate.
Everything else was infallible too and we were impressed by the amount of work that went into creating the components – most notably the feather shaped white chocolate.

Overall, the newly designed menu at Tatsu Japanese Cuisine is a little heavier in taste and savory, which is ideal for sake, wine or whisky pairing. If that sounds appealing to you, make sure to drop by soon.