Visitors to Taiwan shouldn’t miss the chance to try inarguably one of the most popular food there, called Oyster Vermicelli (locals call it Oh Ah Mee Suah). This street food is almost synonymous with Taiwan, mention Taiwan and this is probably the first thing that comes to mind, vice versa.
From a food lover’s perspective, if you have visited Taiwan before and did not try a single bowl of Oyster Vermicelli, my oh my your trip had been in vain. It is basically a type of noodle soup with oysters (or substituted with pig’s large intestines) and vermicelli as its main ingredients. The stewed broth is thick, aromatic and always served piping hot. I know there are some franchises mushrooming in Malaysia that claim to sell Oyster Vermicelli and other Taiwan street snacks like *ahem* Shihlin *wheeze* Street Snacks *coughs* But lets not kid ourselves here, they just suck and cannot be compared to the real thing at all.
Weather aside, the other thing that you should really be worried about when visiting Taiwan is your stomach space. You want to try as many street food as you can, but a person can only eat so much. To avoid wasting the precious space on lousy food, it’s always best to eat at established eateries that are well received by both tourists and the locals alike. For Oyster Vermicelli, Ah Chung 阿宗面线 has always been the prime choice. You might have even done your homework prior going to Taiwan on where to find the best Oyster Vermicelli and so ever determined to try it. Me too. But most of time when traveling, especially overseas you do not have the luxury of time to pursue everything you have planned for.
So, I had my Oyster Vermicelli at where the majority of tourists had theirs too.. none other at Ah Chung Flour-Rice Noodle. I actually had it twice – once at Shihlin Night Market, and another time at their main branch at Xi Men Ding. At Ah Chung, both oysters and large intestines are present in the noodle soup @ TWD$40 a bowl. Chili oil and vinegar are placed at the side of the restaurant, which are actually optional seasoning. While the vermicelli is good on its own, a hint of chili oil and vinegar adds a lot of kick and takes it to a whole new level.
Beware not to add too much of those because the chili oil is really lip-burning hot. You wouldn’t want to spoil the broth’s flavor too. At Shihlin’s Ah Chung, the customers are a luckier bunch for getting a place to sit and watch the TV while eating. For those patronizing the main branch at Xi Men Ding, it’s a different scene. The queue is long and never-ending with flurry of customers. Most of the customers have to stand by the street to finish their bowl of vermicelli. 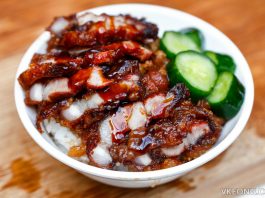