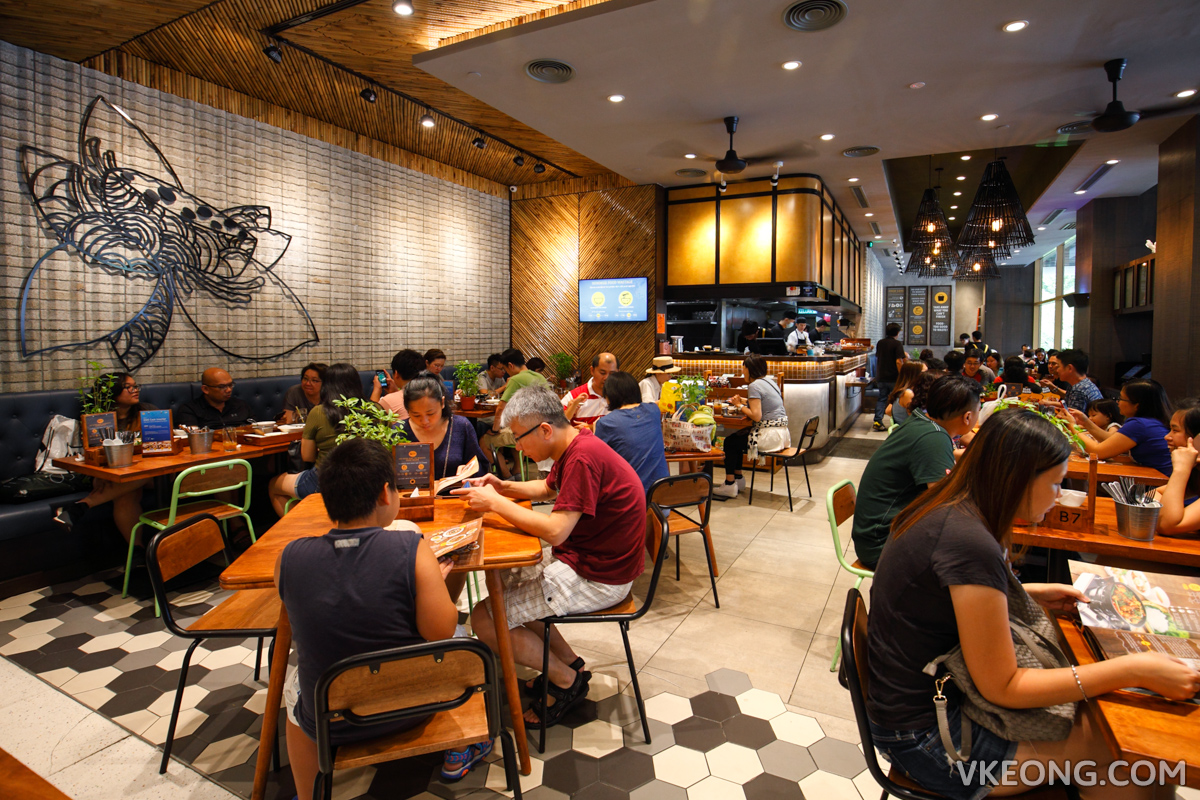 Based on our observation, Ăn Viet is one of the busiest restaurants in Sunway Pyramid. Besides the standard pho, Vietnamese spring rolls and banh mi, their menu also offer some of the more unique dishes like bun cha and cha ca. For me, that’s the defining factor that sets them apart from the other Vietnamese restaurants in KL. 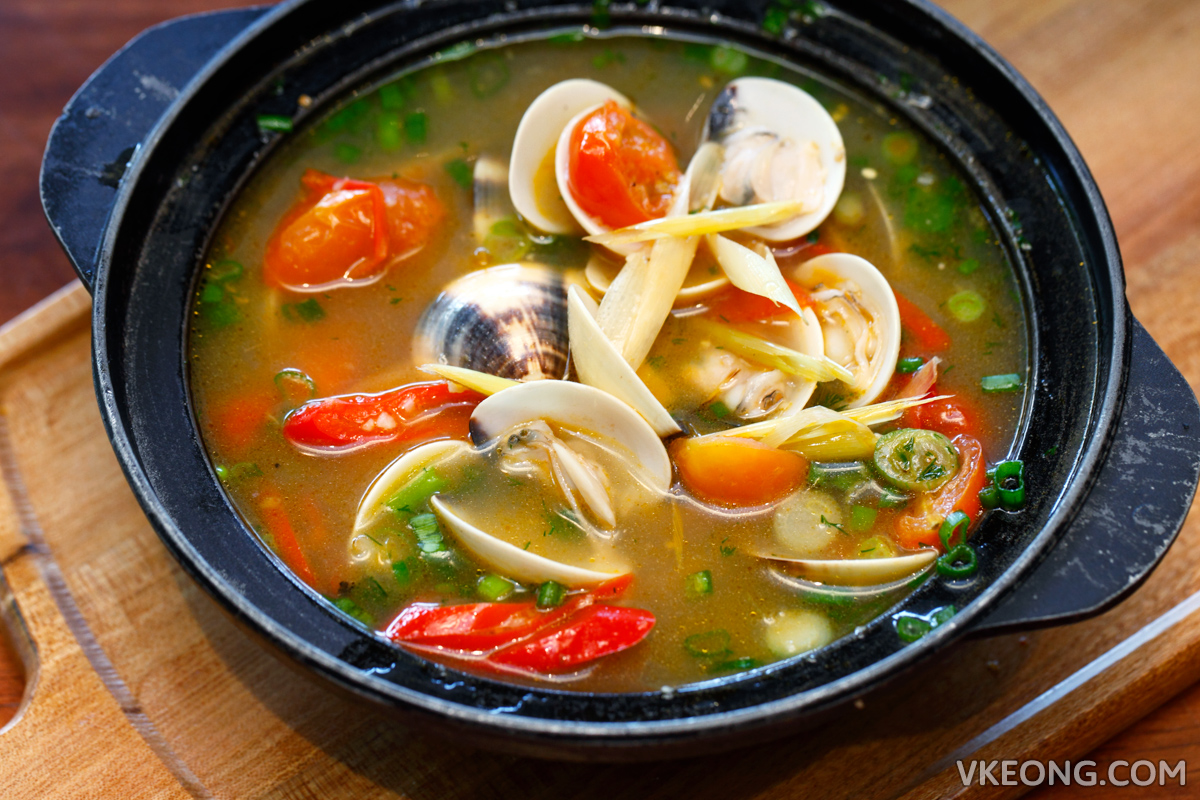 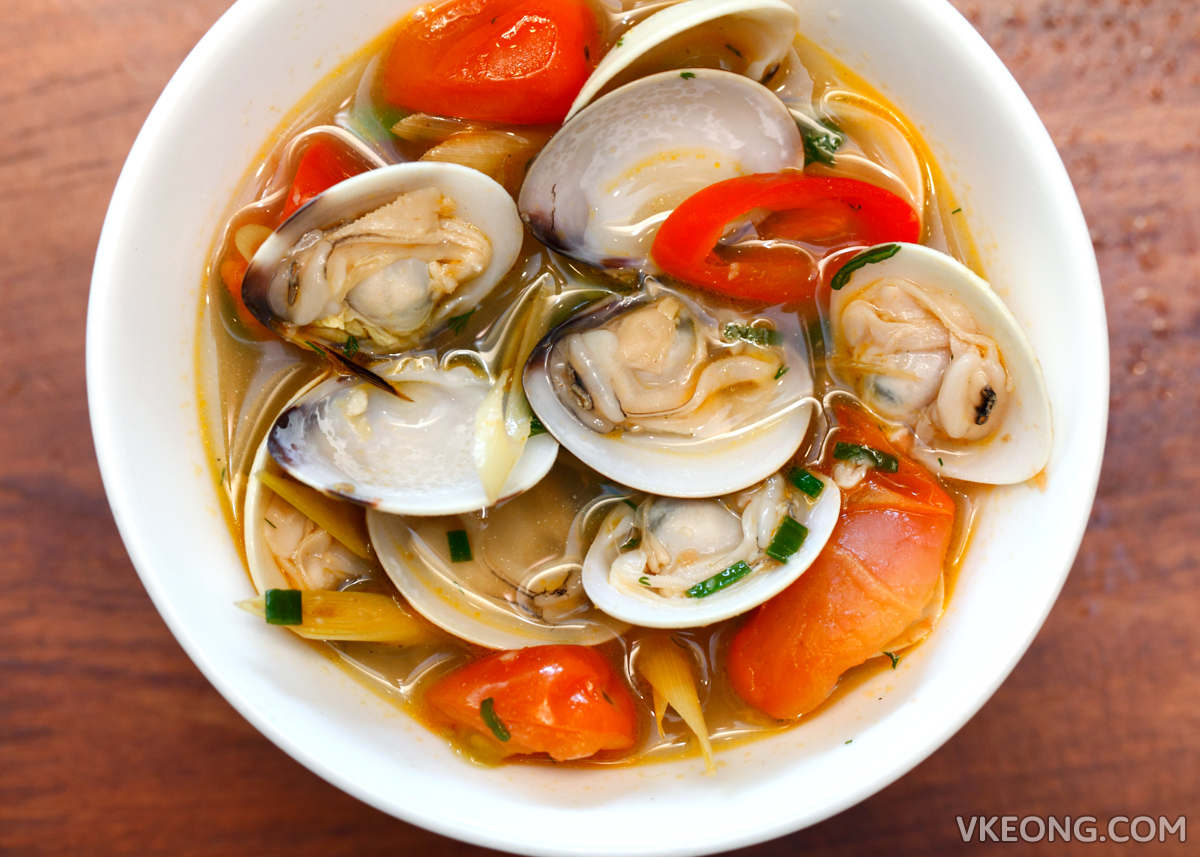 At RM14.90 a serving, the Clam in Coconut Broth is value for money, delicious too. The portion is large enough to be shared comfortably by 2 and prepared with live clams, something you rarely get in a shopping mall restaurant. Coconut juice and fresh clams contribute to the naturally sweet tasting broth, which is nicely balanced by the tang of tomatoes. 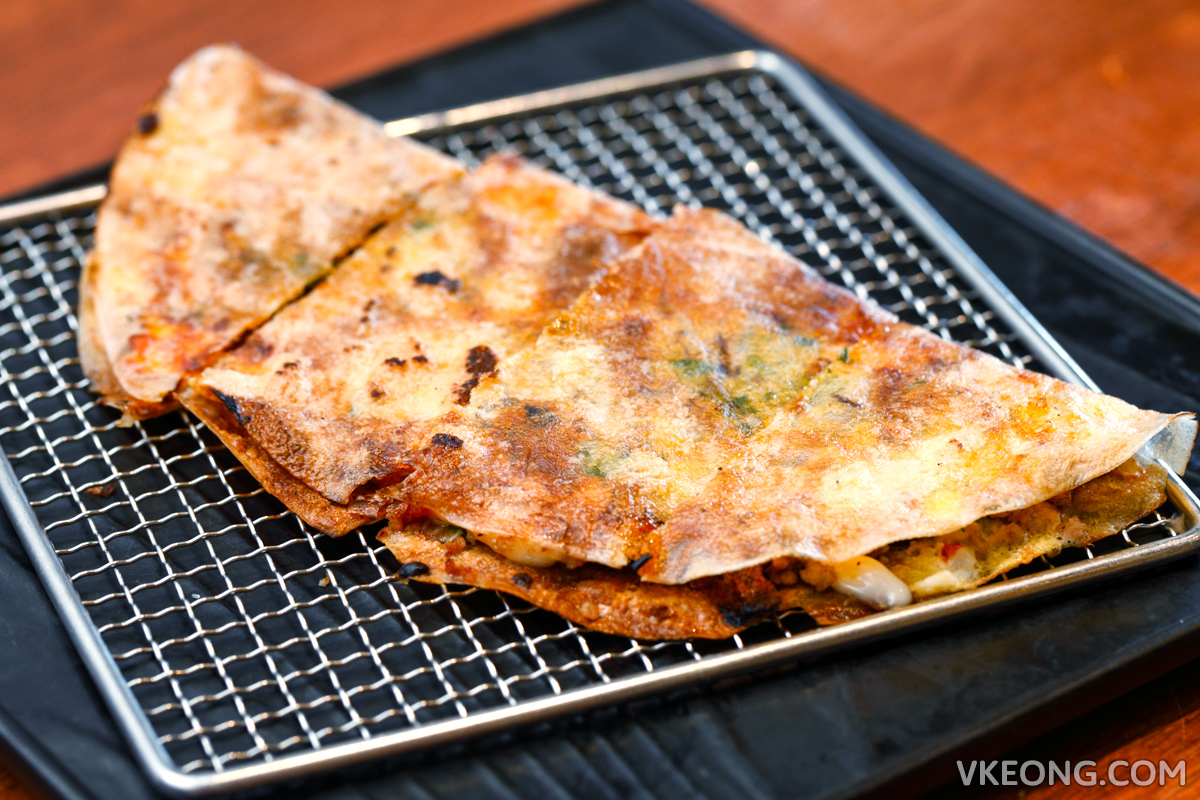 I would also recommend the Grilled Rice Paper with Minced Pork @ RM9.90. It’s sort of like a taco but wrapped in a thin and crispy rice paper instead. The filling contains mainly minced pork, fried shallots and mayonnaise so you can imagine it has a savory taste – an addictive one too. 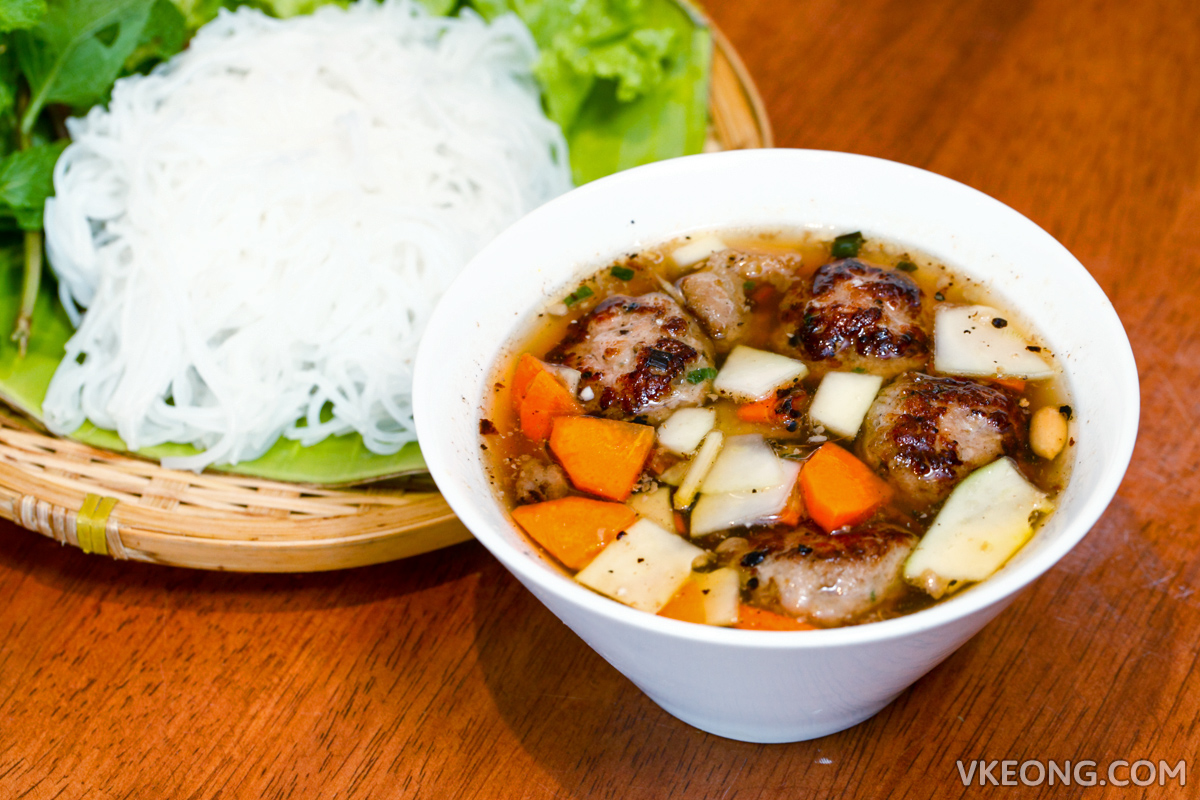 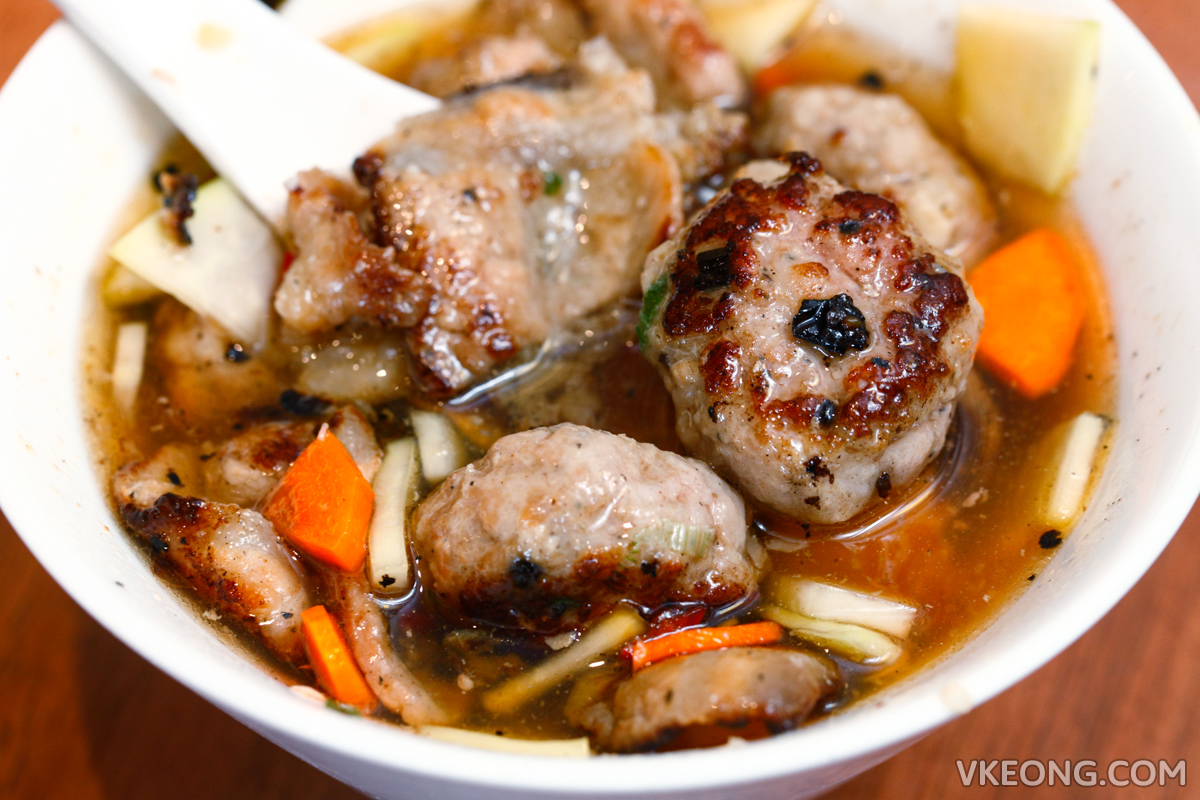 Bun Cha (Hanoi Style Grilled Pork with Vermicelli) @ 18.90 is one of the most memorable street food we had in Hanoi so I just had to order it for reminiscing. To enjoy bun cha, you simply add the lettuce, basil and mint into the dipping sauce followed by the vermicelli.
Don’t be surprised if the bun cha tastes sweet, as that is the intended flavor. Overall, Ăn Viet ‘s bun cha is a noble rendition of the real thing. The only noticeable difference is that it comes with more mint, in fact a heap load of it if you were having this in Hanoi. 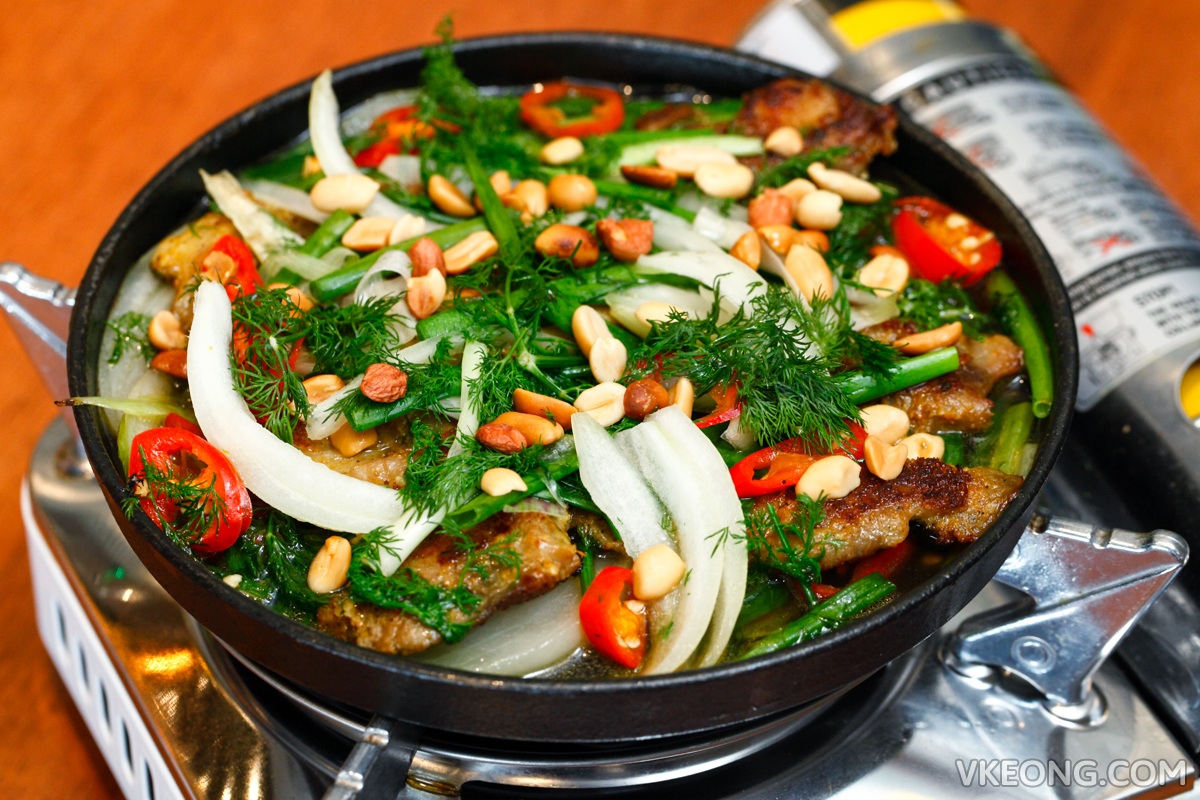 Cha Ca is another dish that we enjoyed in Hanoi and it’s also available here @ RM23.90. It features chunks of catfish marinated in turmeric cooked further on a stove then mixed with dill, parsley and spring onions for extra aroma and flavor.
Traditionally, the peanuts and chopped chilies are served separately but they are already added into the pan here for your convenience. Taste wise, I think Ăn Viet pretty much nailed it. Any more authentic you would have to fly to Hanoi. 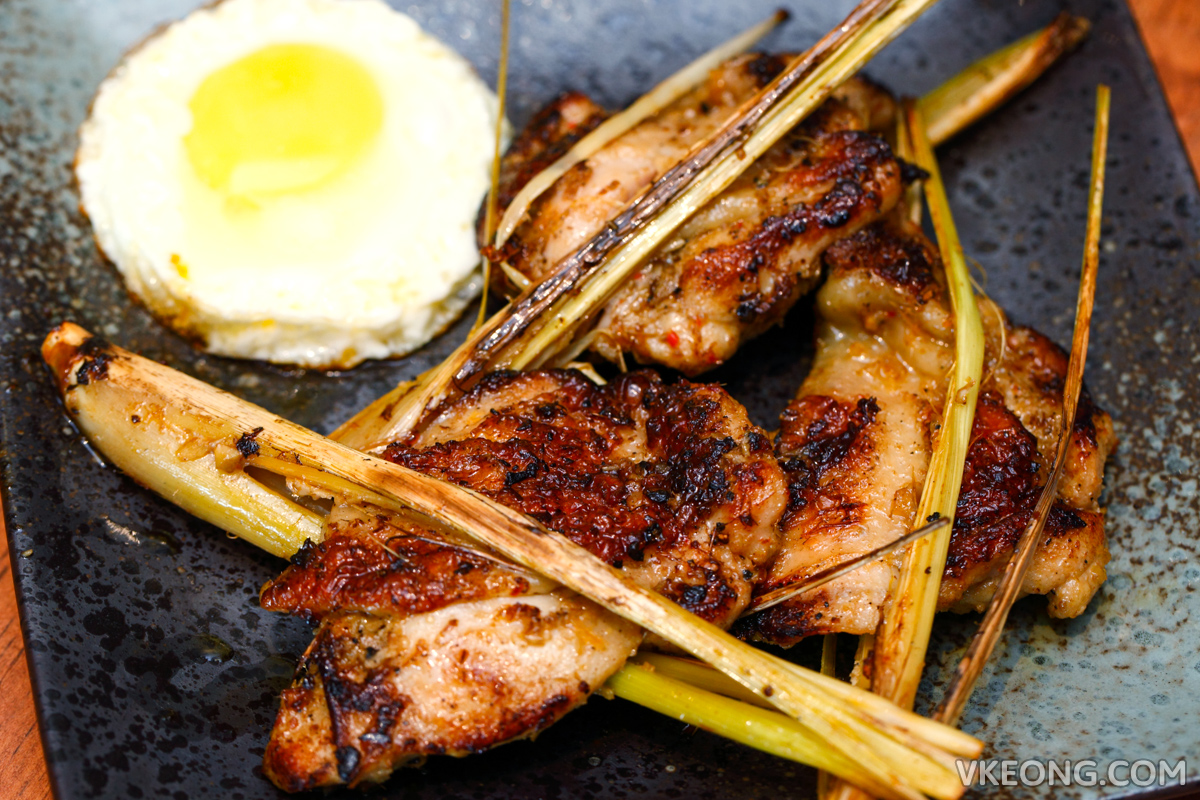 The Grilled Lemongrass Chicken @ RM13.90 is straightforward tasty with a caramelized skin. Chicken thighs were used so they are tender and juicy. It is also available with rice for RM15.90, or with rice, side dish and soup for RM19.90. 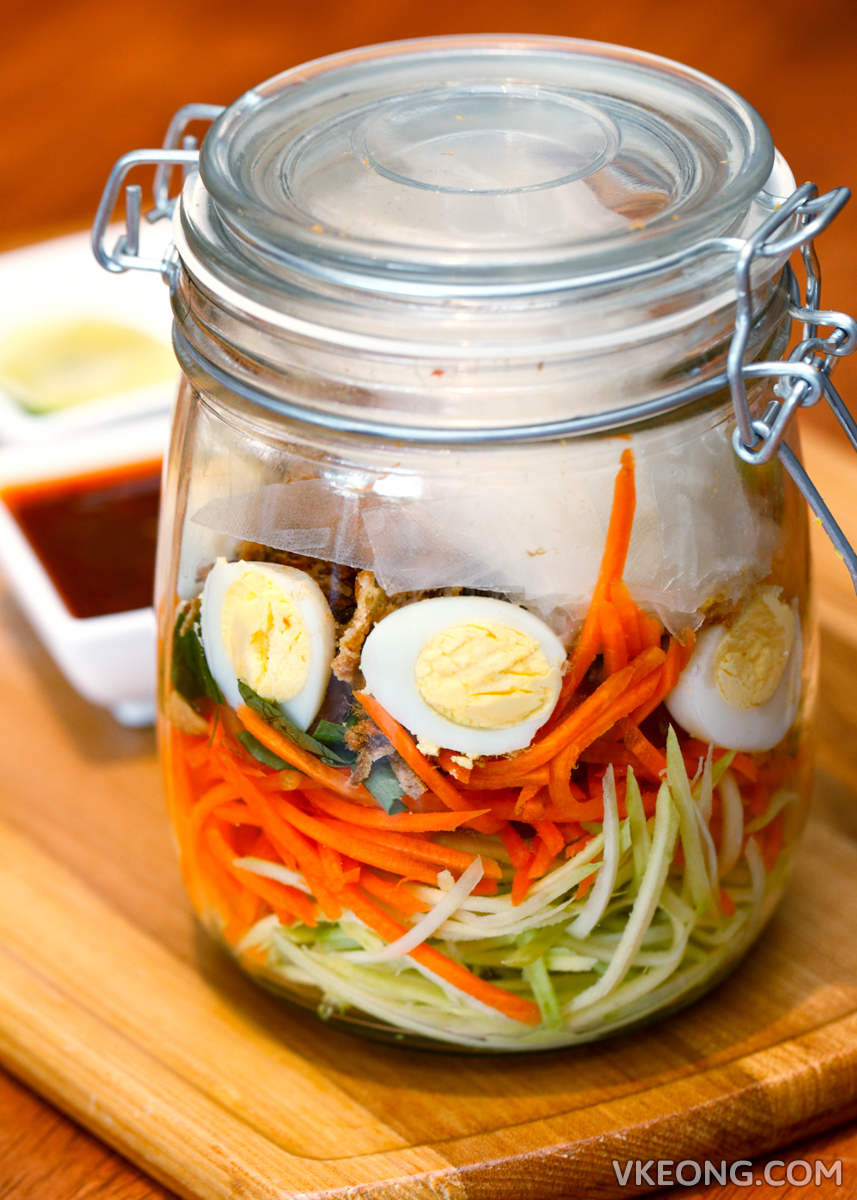 For something different and fun, try the Rice Paper & Green Mango Salad @ RM13.90. The salad is served in an air-tight jar where you need to add the sauce and lime juice into the it, then give it a vigorous shake for the ingredients to mix. It’s spicy and tangy with contrasting textures. 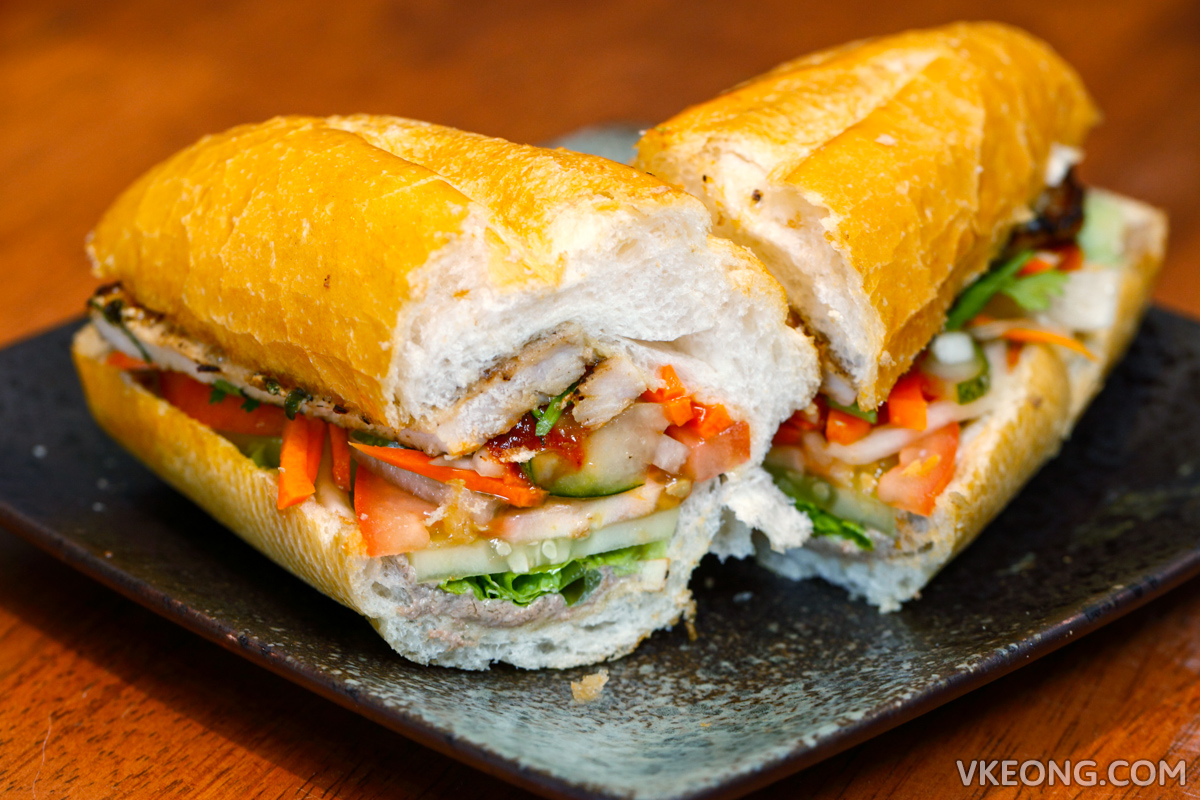 The least enjoyable item we had that day was the Banh Mi (with grilled pork chop) @ RM14.90, not because it was bad but because it contained pork liver pate (mentioned in the menu but missed it) which we never fancied.
So for those who don’t like pork liver, remember to let the staff know to omit it from your sandwich. That said, the rest of it was good especially the crispy and airy baguette, though a bigger piece of pork chop would have been appreciated. 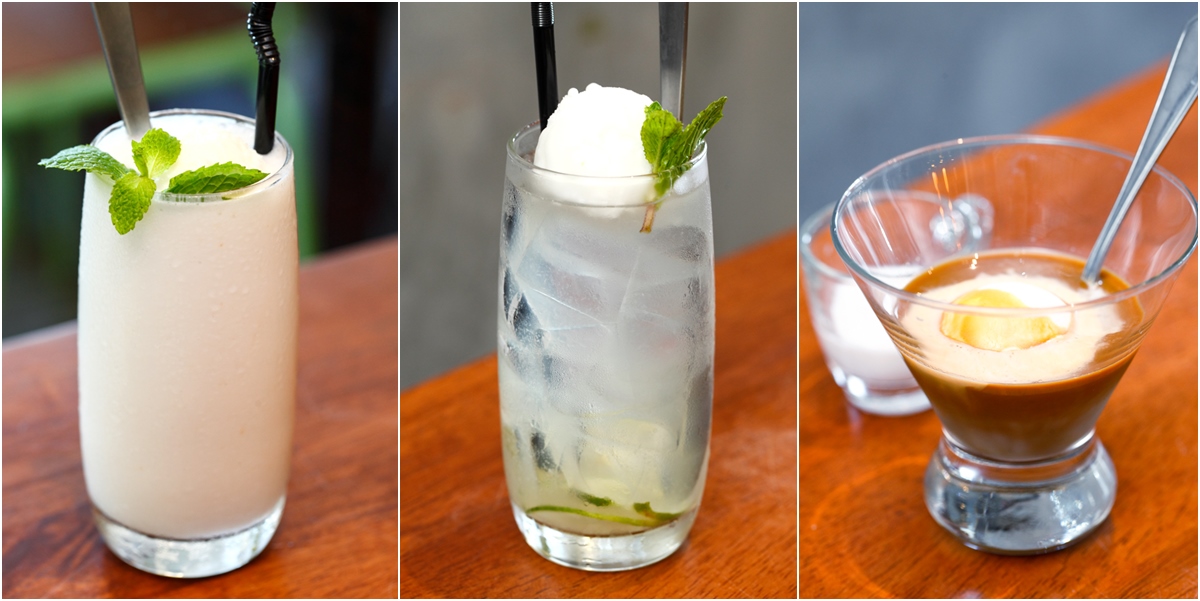 Ăn Viet serves great Vietnamese coffee and I encourage you to try as many as you can. The other drinks we had like the ice blended coconut and lime juice were quite standard stuff. We enjoyed the Viet-ffogato (condensed milk ice cream with Vietnamese coffee and coconut cream) @ RM9.90 more than any other affogato we had in the cafes. 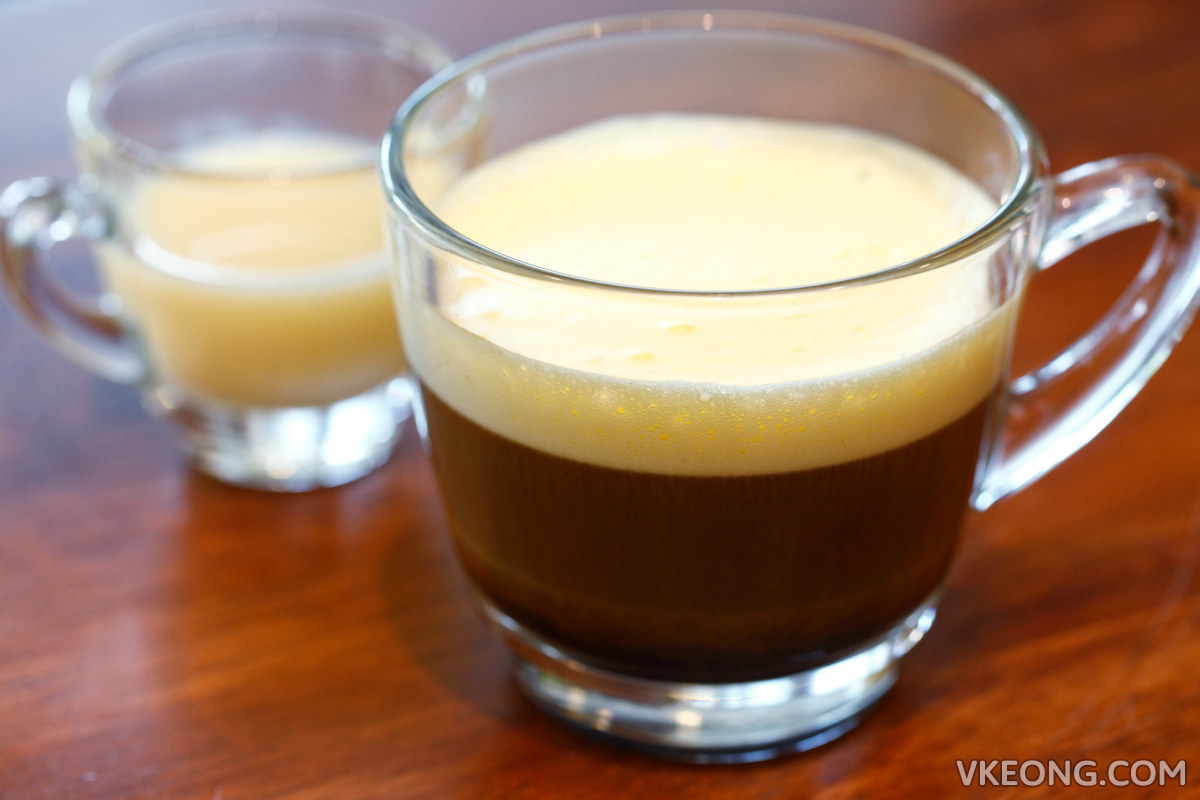 If you are adventurous enough, try the Vietnamese Drip Coffee with Egg @ RM9.90. This drink is a staple in every cafe in Vietnam so you can imagine its popularity. The layer of foam on top of the coffee is actually beaten egg yolks with sugar to mimic the texture of frothed milk. It might seem weird for us, but trust me it tastes a lot better than it sounds. 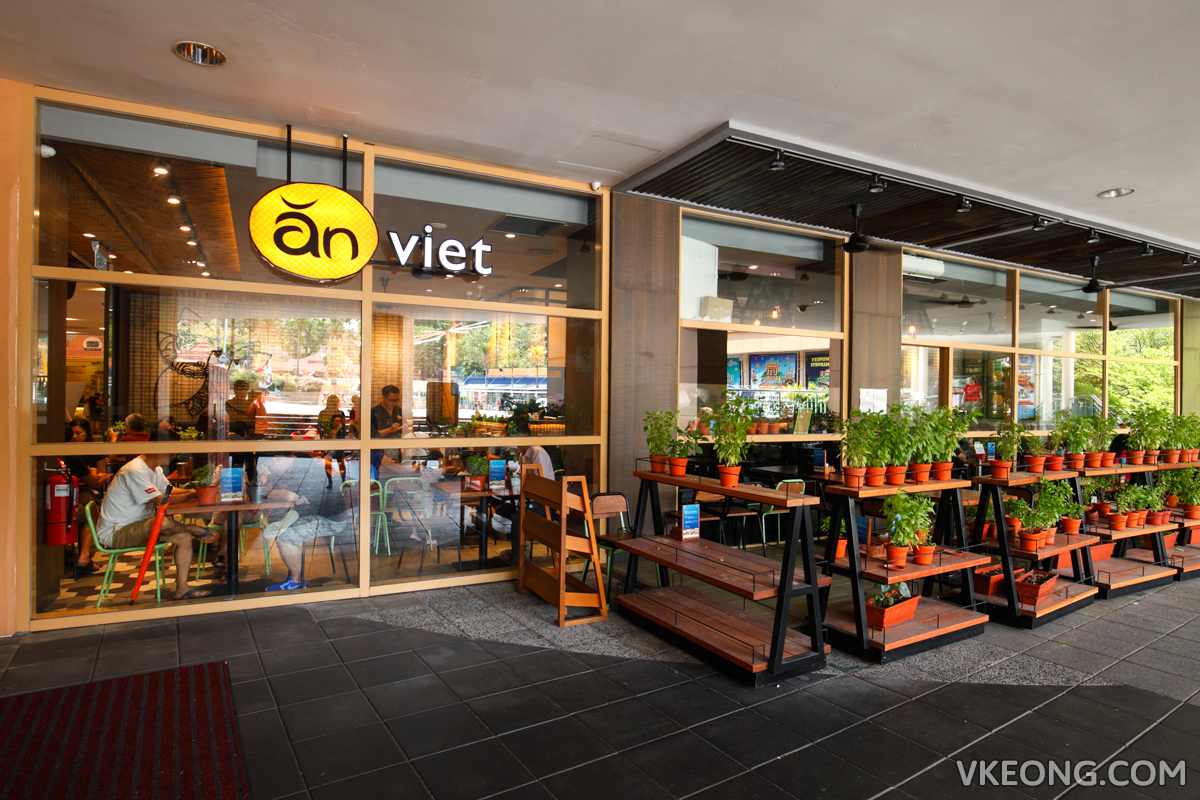 Lastly, I must commend Ăn Viet for being a socially responsible restaurant. The founders are passionate advocates against food wastage so customers are encouraged to finish the food they ordered. 10 cents will be contributed to their CSR program for customers who do so.
Other steps they have taken to reduce food wastage include placing basil plants on every table (Sunway Pyramid branch only) to let customers pick only as much as needed. You can also specify the grammage of noodle and rice in the pho and other rice dishes. If you misjudged and had too little, not too worry because the additional portion of rice/noodle will not incur extra charges. 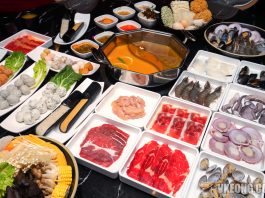 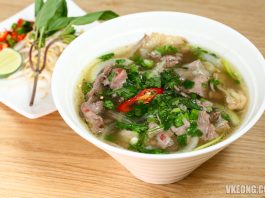 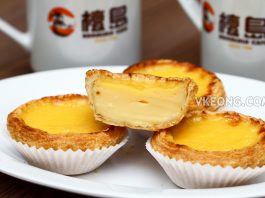 Eat October 9, 2017
ABOUT US
VKEONG.COM - Malaysia Food and Travel blog with reviews of restaurants, hawker and street food in KL, Penang, Melaka and beyond.
Contact us: vkeong@yahoo.com
FOLLOW US
© VKEONG.COM - All Rights Reserved