*** NOTICE: Issues like drop in food quality, cold dim sum and arrogant service reported by many. This review might not be accurate anymore ***

Axian, with a couple of partners have opened a dim sum restaurant in Bandar Puteri Puchong. If you don’t know who the guy is, he is the popular host Jason Yeoh, the host of Taste With Jason 阿贤人情味, a show promoting Malaysian food. You probably seen him before on Astro AEC, or on advertisements of products (mostly health) he is a spokesperson of.
Since I stay so near to Bandar Puteri Puchong and it has been a while since I last had my meal there, I decided to give his dim sum a try last weekend. FYI this was my second visit. Actually I knew about Axian Dim Sum restaurant from my friend, who read about it on Axian’s very own food blog. I have tried many of the fried stuff on my first visit so I only had steamed items mostly this time around. If you are wondering, the egg tarts and fried siau pao were good stuff. The steamed dim sum at Axian’s Dim Sum is generally good but comes with a more expensive price @ RM4.50 each. It is the most expensive dim sum restaurant around in Puchong for its category, about RM1 to Rm1.50 more expensive than the counterparts.
To be honest I didn’t mind the price as long as it tasted good. Besides, the ingredients used were really fresh especially the prawns. So fresh and juicy you can taste it. It is said that Sakura Pork (antibiotic and growth hormone free) was used to produce the dim sum at Axian, which resulted in a healthier and better tasting meat.
This is the highly recommended Har Mai (招牌蒸虾卖) You gotta love those whole succulent and sweet tasting prawns. The orangish appearance is natural and I swear no photoshop was used to enhance the colors yeah. Shanghai Xiao Long Bao (上海小笼包) @ RM6 for three. The dumplings had a very strong taste (porky?), which I didn’t know was a good thing or not. For those who really like the taste of Xiao Long Bao you might love this, but for me it’s just a tad too strong. One alone was already enough for me. Crispy Salad Roll (沙律脆皮卷) It was really crispy alright, with a whole prawn wrapped in the Vietnamese rice paper roll. Served with mayonnaise sauce said to be specially made by the chefs. But honestly, I thought it was actually just like any other mayonnaise lol. Axian’s Siu Mai (蟹皇蒸烧卖) – this is another recommended item, I think it is one of the better siu mai in Puchong. Another prawn salad, I preferred the crispy version’s more. Axian’s Har Gao (水晶虾饺王) had a different shape from the conventional one. Despite the generous prawn filling, it didn’t taste like a very traditional Har Gao. If you treat it like eating another type of dim sum, you might like it more. Overall Axian Dim Sum is pretty good, and they better be for the price they are charging. If you wish to see Jason in person, drop by during weekends after 8 or 9am, that’s when he will be around preparing drinks, entertaining customers and taking photos with them. I took a photo of him as well lol. A nice and friendly person, very accommodating.
Due to Jason’s popularity, many flock to the restaurant for the dim sum. And because the staff is young and inexperienced too, do expect some mix up and delays in your order. Both times I went there were questions of “where is my dim sum? where is my Xiao Long Bao? Where?!” being thrown around.
If you wish to avoid this, come early before 8am and you will have better service and less frustration. Instead of you asking them for dim sum, they will be the one asking YOU if you want any. Location map and address, as retrieved from Jason’s blog 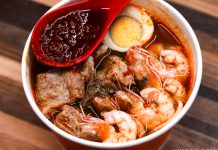 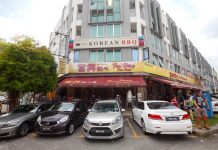