Most people who had been to Bali will tell you that Babi Guling (roasted suckling pig over coconut husk fire) is a must try local delicacy. Unless your diet is restricted by health, religion or personal beliefs, there is simply no excuse to miss eating Babi Guling in Bali. Else, the your trip is in vain. It’s almost like going visiting Penang and not eating Char Koay Teow!
But of course, as always there are also non-believers who swear off this dish because they felt it fell way off their expectations. Well, I can only say that they had been eating at the wrong places. Anyway, if you Google around you will see that Ibu Oka at Ubud is most famous thanks to Anthony Bourdain’s endorsement. To be honest I would have eaten at Ibu Oka as well if I did not ask for a second opinion on the social network. A friend who had been to Bali before responded and directed me to Pak Dobiel at Nusa Dua instead.
But just so you know, even though I felt Pak Dobiel’s Babi Guling is tasty enough to be recommended, my Balinese tour guide in his on words commented that it was “parah sekali” if compared to the best one he had. So, don’t take my recommendation as a foreigner too seriously, as it is only good as a last-ditch resort. That being said, Babi Guling is usually eaten with rice and the toppings could be served together or separately from the rice however the seller wants. Crispy pork skin, pork slices, sambal, pork liver and lawar (mixed vegetables with herbs and spices) are always present while some places also includes pork sate. A normal serving with Jukut Ares (a type of soup prepared using young banana stem and ribs) cost Rp35,000 (about RM11) which is a pretty standard price for Babi Guling in Bali. Although a far cry from the best from a Balinese’s point of view, I thought the Babi Guling rice here is quite tasty while the soup was forgettable. The marinated meat is tender and flavorful without any gamey taste while the sambal is well concocted to add a spicy kick – not bad at all for my first introduction to this dish, at least I left a happy tourist. 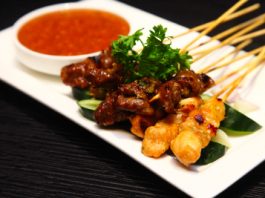 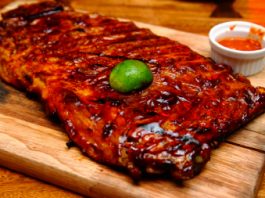 Eat December 20, 2014
ABOUT US
VKEONG.COM - Malaysia Food and Travel blog with reviews of restaurants, hawker and street food in KL, Penang, Melaka and beyond.
Contact us: vkeong@yahoo.com
FOLLOW US
© VKEONG.COM - All Rights Reserved