Bel Pasto is an Italian restaurant in Kepong that is run by real Italian chefs. The restaurant in Kepong is actually Bel Pasto’s second branch, with the first established at Aman Puri not too far away. Initially, I thought Bel Pasto had something to do with pasta because of the word similarity but it actually means ‘nice meal’. Being in an Italian restaurant, it’s only natural that we tried their pasta. After all, it is their staple food. Fettucini Salmone @ RM19.50 was faithfully prepared according to typical Italian recipe. The al dente pasta, generous chunks of salmon and Parmesan cheese made made it an enjoyable dish even though I am not a pasta fan. We felt the price was a little expensive though.
We also had a bowl of Mushroom Soup @ RM6.80 but personally, I didn’t like it because of the bitterness of the wild mushroom used. The Hawaiian Pizza @ RM15.50 was great, baked thin crust just the way I like it with loads of cheese melted on top. There’s really nothing to complain about. But the star of the night gotta be Bel Pasto’s home made Tiramisu, the famous Italian cake. Priced at RM8.90, the portion so huge that it could be described as ‘a small block’ lol. It was full of coffee aroma, not too sweet and the biscuits held together nicely. A perfect ending to a great meal! All in all, Bel Pasto is a cozy restaurant with friendly staff that churns out traditional Italian food. Parking is a real headache at this area though. 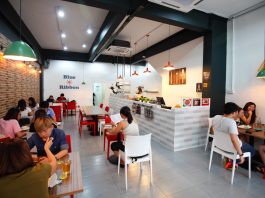 Eat August 7, 2017
ABOUT US
VKEONG.COM - Malaysia Food and Travel blog with reviews of restaurants, hawker and street food in KL, Penang, Melaka and beyond.
Contact us: vkeong@yahoo.com
FOLLOW US
© VKEONG.COM - All Rights Reserved