** Since May 2015, Brother John has turned his burger stall into a truck and is now operating in front of “Bald Bear Guitar” instead. Easier to look for it diagonally opposite Texas Chicken ** 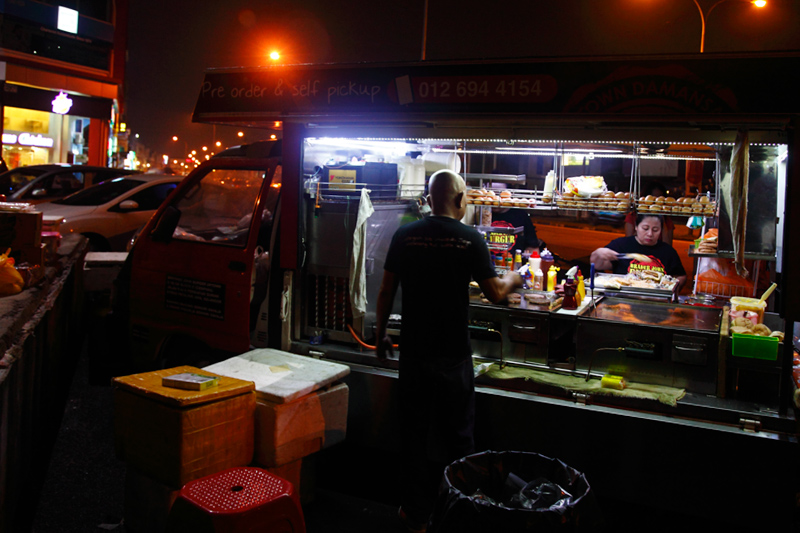 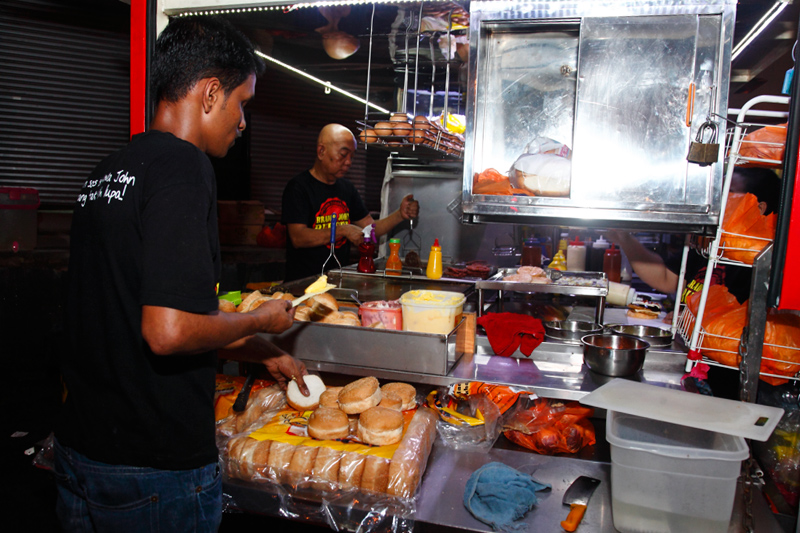 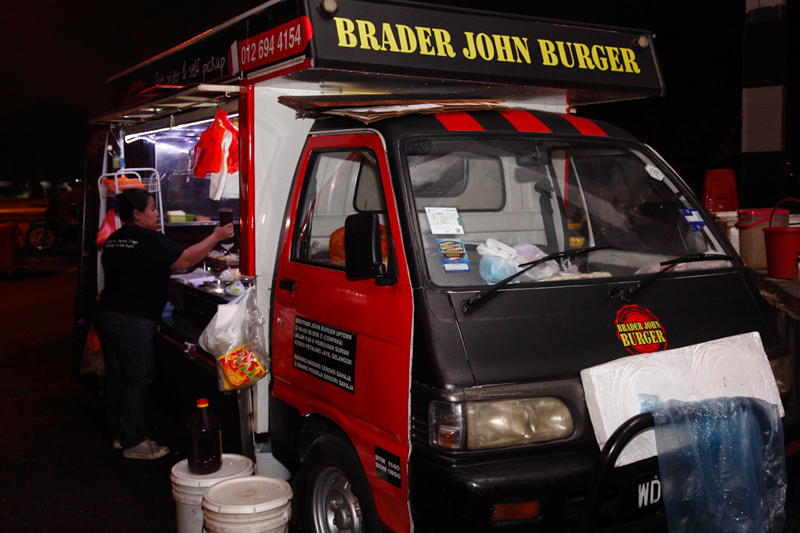 Are you willing to brave the traffic, get in line and hold your hunger for an hour for a Ramly burger? That’s a question you need to ask yourself before going to Brader John‘s burger stall because that’s the exact situation I went through.
Even though I had been to Damansara Uptown quite a few times myself, it was only until two weeks ago I spotted this burger stall with so many customers surrounding it. Then I thought to myself I have to give it a try no matter what just to find out what’s all the fuss about. 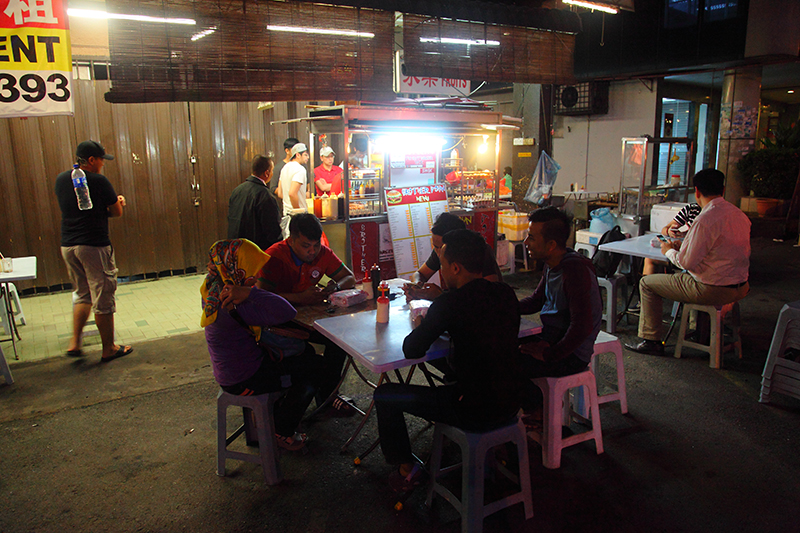 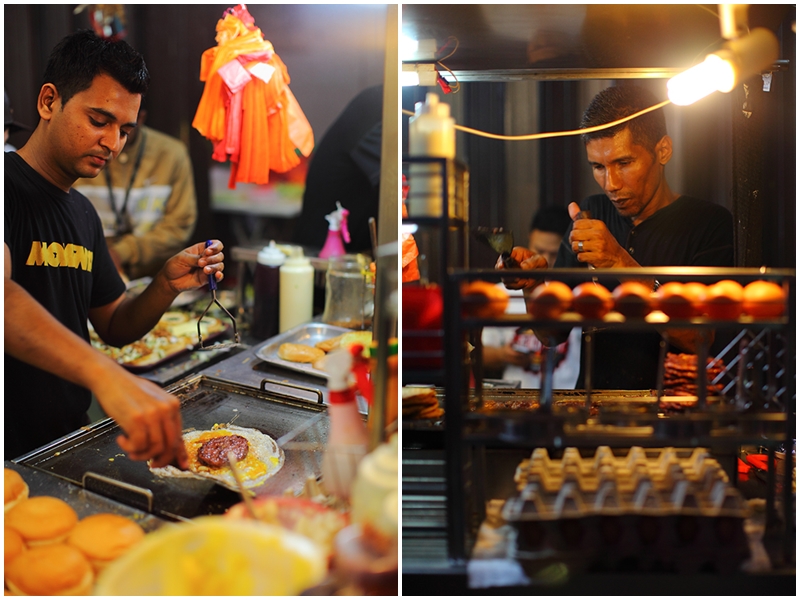 But ok lah, the waiting time might not be so long, as it really depends on your luck. We waited from 10.06pm and got our burger at 11.04pm. By then almost everyone was already digging into their burgers and I am pretty sure if we arrived at that time, we would have gotten ours in less than 10 minutes. 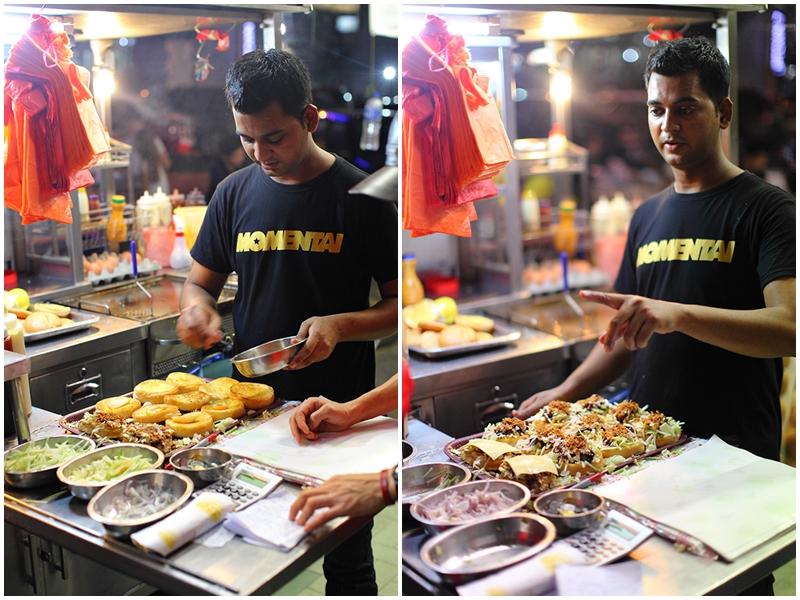 Since we waited for an hour we had the pleasure of scrutizining Brother John’s operation. We found that despite having a good system at frying the patties, everything else was pretty much in mess which explains the long wait. Tasks were not being delegated properly – any of the boys could take down orders, butter the buns, slice the vegetables, prepare the drinks and wrap the burgers. As a result you could see them doing something different at some point. 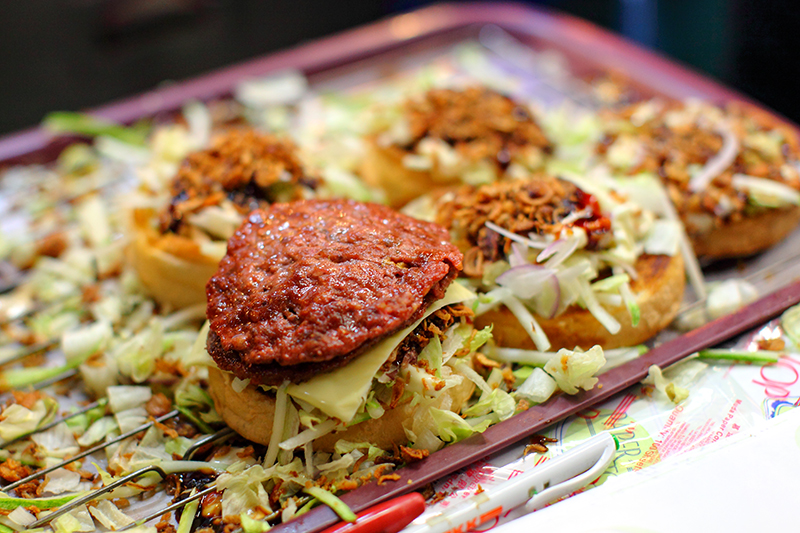 And to make matters worse, some fussy customers would make very very weird requests and Brother John is more than happy to accommodate them. His easy-going, want-to-please attitude is good for him and I applaud that, but it sucks for us who are waiting.
I wonder why you, as a full grown male adult could not just order a burger as it is. Why do you need to ask for no veggies, more of this and less of that just to add to the confusion and hold up the line? OK, end of rant. 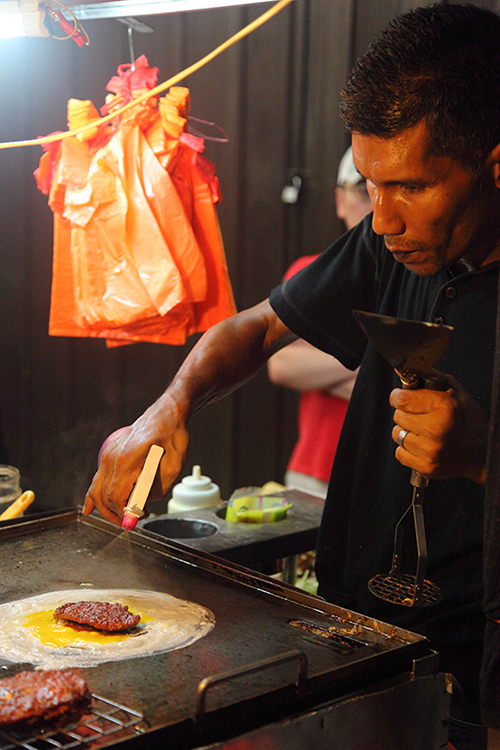 Anyway, I’m not going into details on how Brother John prepares his burger since who hasn’t been to a Ramly burger stall? But there are a few things he does differently. The seasoning and condiments used here are of better quality, no chilli sauce was used and I like how he sprays a his secret sauce (I think its Lea & Perrins, many bottles of them were seen in the stall) onto the patties for an even coating.
Mustard and chilli powder lends the spicy kick while a self-concocted BBQ think sauce gives the burger a nice sweet and smoky flavour. 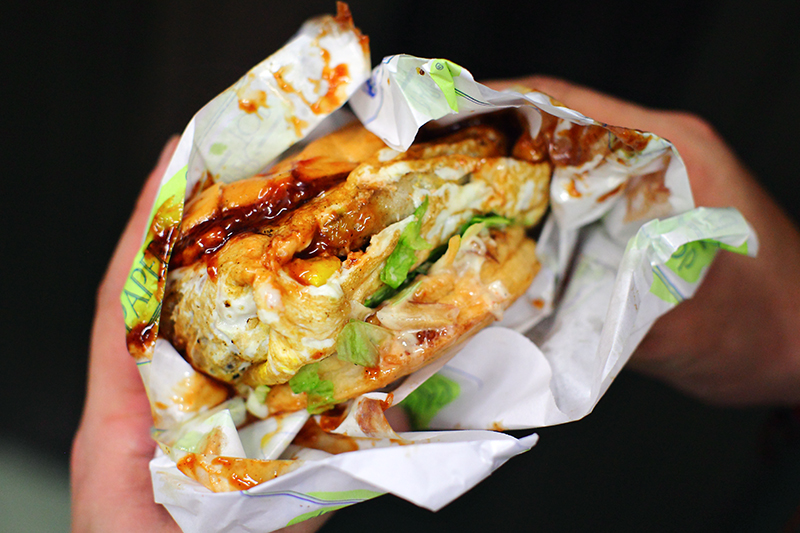 Although a lot of seasoning and sauces go into the burger creating that ‘banjir’ effect, the taste was not as empowering as expected and you could still savour the patties’ original flavour. By the way I am referring to my O-Bulat (Sempoi) Daging Double Special @ RM9, and not the normal Ramly beef burger.
If you’re here I suggest you to get adventurous and try more of the unique offerings such as Darabeef, O-Bulat (the beef patty is thick, juicy and tastes more like real beef) and mutton burgers. 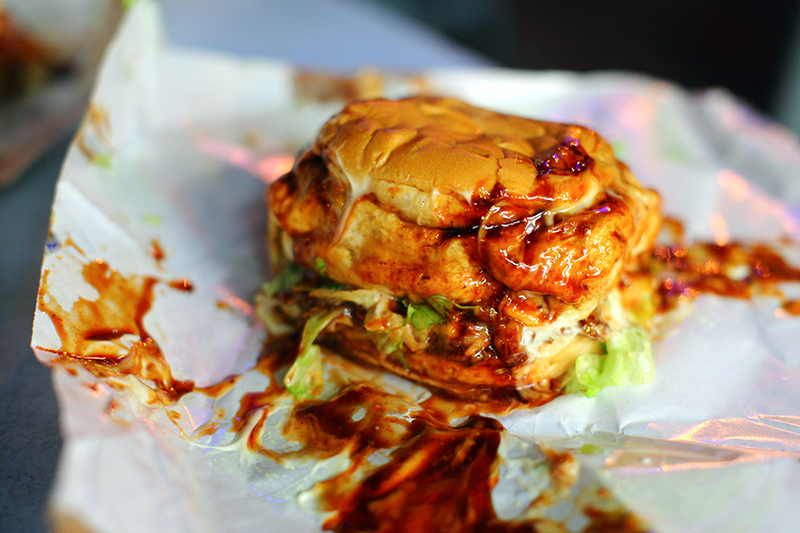 It’s a messy burger to eat alright but what did you expect from a street-burger? Luckily there were ample tissue papers around and a basin nearby to wash your hands afterwards. 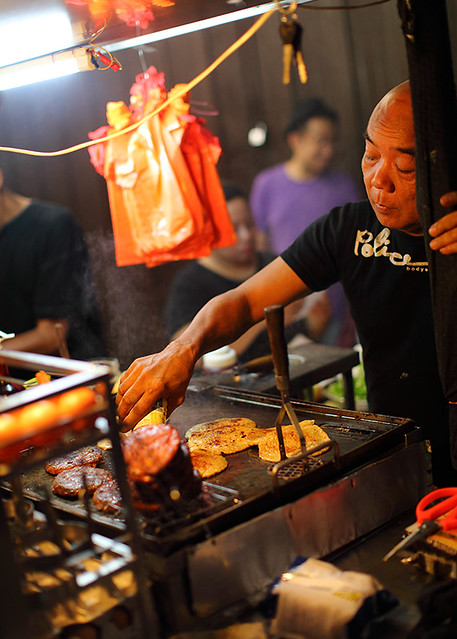 If you’re wondering, this is the real Brother John. He’s evidently more skillful than his boys and the line started to move faster as soon as he took over. 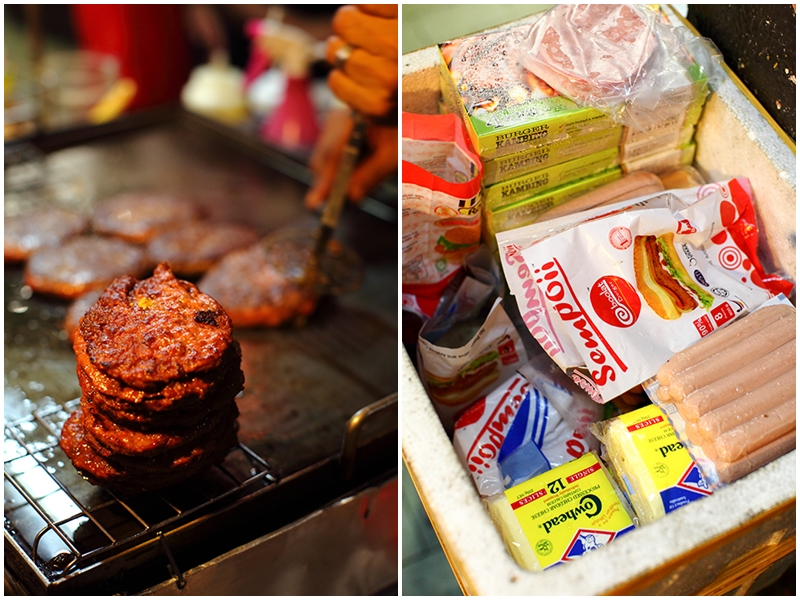 A tower of patties is usually fried and ready to be wrapped in omelette. On the right you could see the brands of hot dog, burger patties and cheese being used. Just look at the number of packs of patties that were on standby and you will know how well Brother John is doing. Who says selling street burgers does not make money? 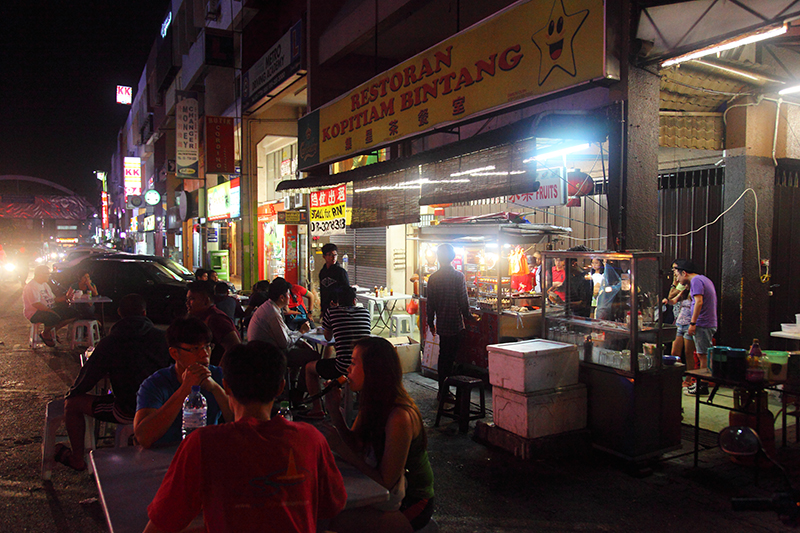 I enjoyed my burger a lot as it gives a different experience compared to the rest. But will I return? A big YES if I could skip the excruciating wait.

** Second visit update: I returned again the next day and found that the service was A LOT better. Even though there were more customers we got our burgers relatively fast about 20 minutes or so. I think it’s because Brother John was around and he could maximize the team’s effectiveness. We had the Ramly Ayam Special @ RM4.50 (nothing really special) and the Mutton Burger Special @ RM7 (this was good, the mutton patty was not very gamey).

Brother John Burger (in front of Restoran Kopitiam Bintang)
56-84 Jalan SS 21/39
Damansara Utama
Business hours: 4pm to 5am, but like many other burger stalls, the operating hours is unpredictable. Closed on Mondays 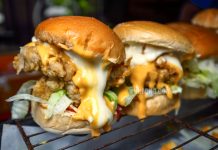 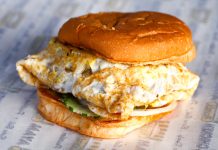 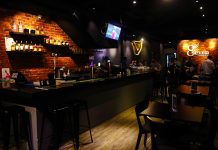