I could still remember my first time having the Char Koay Teow at Kedai Kopi Sin Hwa opposite the Pulau Tikus police station. It was particularly memorable due to the non-existant parking space (near to market) and the coffee shop was unusually stuffy with little ventilation. And of course, the Char Koay Teow is kind of special too, as it comes with squids and you have the option of ‘upgrading’ it to a duck egg version for extra 50 cents. Instead of relying on the seafood sweetness achieved by using huge prawns, Sin Hwa’s Char Koay Teow is red hot, which focuses more on wok hei and spiciness – the oomph factor. And not to mention cheaper too compared to those selling at a crazy price of RM7–RM10 per plate.

Well that was about 4-5 years ago when the old lady was still in charge of cooking. Now, a young man has taken over the wok and he is the grandson of the old lady who had decided to retire for good. You will still see her around though, taking orders and delivering the noodles at the coffee shop, or maybe even giving some pointers to her protege in training. I would be naive to expect the Char Koay Teow to taste the same when it is fried by a different person who has less experience. Although it isn’t as delicious as I remembered, the overall flavor is still there. All he needs is more experience and I am sure he would be better in no time. Anyway, being a young man I am sure he has ideas of his own and hopefully he would improvise on the frying techniques and all, instead of just following his grandmother’s footsteps. Also, it is quite rare for someone so young to step up and continue the family business, moreover a hawker stall that is quite labor intensive. If you are not local, Siam Road Char Koay Teow is THE one to try. But if timing and directions are not in your favor then this is not too shabby lah, plus the waiting time is short when compared to the popular ones. The coffee shop is just next to Swee Kong Cafe, where you would find a rather busy Hokkien Mee (means Prawn noodles to Penangites) and Apom Manis in the morning. 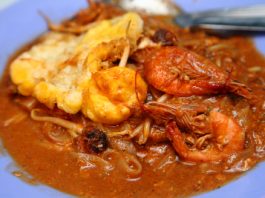 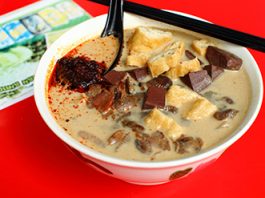 Eat January 30, 2015
ABOUT US
VKEONG.COM - Malaysia Food and Travel blog with reviews of restaurants, hawker and street food in KL, Penang, Melaka and beyond.
Contact us: vkeong@yahoo.com
FOLLOW US
© VKEONG.COM - All Rights Reserved