Chinese Pancake is not a commonly available hawker food in Penang so you really got to know exactly where to find it. A popular stall, which is my mom’s favorite used to operate along Beach Street. It was so good she would travel all the way to Penang from Sungai Petani just to savour it. Recently she went back to look for it but the stall had mysteriously disappeared. To fulfill her cravings as well as my own curiosity, I did some research and found that the stall has moved to Church Street. But what do you know? The unexpected happened again. When I went to the coffee shop at Church Street to look for the Chinese Pancake, I was told that the stall had shifted again. This time to Sin Kim San at Rangoon Road.
Luckily my perseverance paid off and I finally found the stall, currently operated by Madam Yeoh who took over from her aunt’s stall at Beach Street (during my mom’s time) years ago. When asked why she shifted to Sin Kim San, her reason was simple: at Sim Kin San she could sell everyday, while the coffee shop at Church Street closes on weekends because they only cater to the banking staff and customers. If you didn’t know, this unique pancake is actually a Nyonya styled food. The pancake batter consisting of flour, sugar and alkaline water (air abu) is mixed and stirred on the spot for every fresh batch of pancake ordered. The batter is fried on a pan on medium low heat and also being spreaded into shape in the same time. Immediately after that, a beaten egg is poured over it. While waiting for the pancake to cook into a golden brown, sliced banana and raisins are arranged on top followed by a generous sprinkle of sesame seeds. A scoop of margarine is then melted on top as well. Then the pancake is quickly flipped to fry the other side until golden brown too. The cooking pancake would then be sliced into smaller pieces, arranged on top of each other to create a layered impression and finally finished with another sprinkle of sesame seeds. A RM3 (smallest) serving is just nice for one person and it arrived piping hot with a nice banana aroma. It doesn’t taste not too sweet and every bite is filled with banana flavor and wonderful raisin taste. I like how the nutty sesame seeds contrast with the pancake’s moist and fluffy texture too. So besides the pancake’s slight oiliness, I don’t really have any complaints. Madam Yeoh revealed she won’t be shifting any time soon but you know anything can happen lol. So catch her while she’s still there! 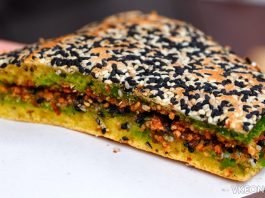