Recently, more and more seafood restaurants are offering French Brown Crab in addition to the mud crabs that they serve usually. You might think that it’s an uncommon crab species but in fact it’s one of the most fished crabs in the world. It is also available in certain supermarkets like NSK where it’s sold at RM90 each. 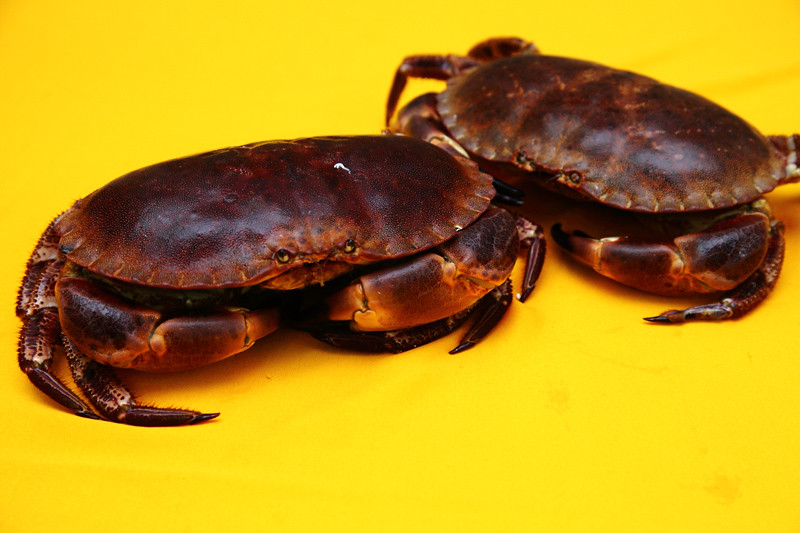 For those who want to try this new crab in town but don’t know how to cook it, it might be a better idea to have it at a restaurant instead. The prices vary though, as some are selling it for as high as RM198 each. A more reasonable restaurant to go is Crab Generation at Taman Len Sen, Cheras where brown crabs are available at RM108 each and the price already includes the cooking fee.
But first, many thanks to the restaurant’s management for hosting me and a couple of other bloggers to preview some of their newly launched dishes. 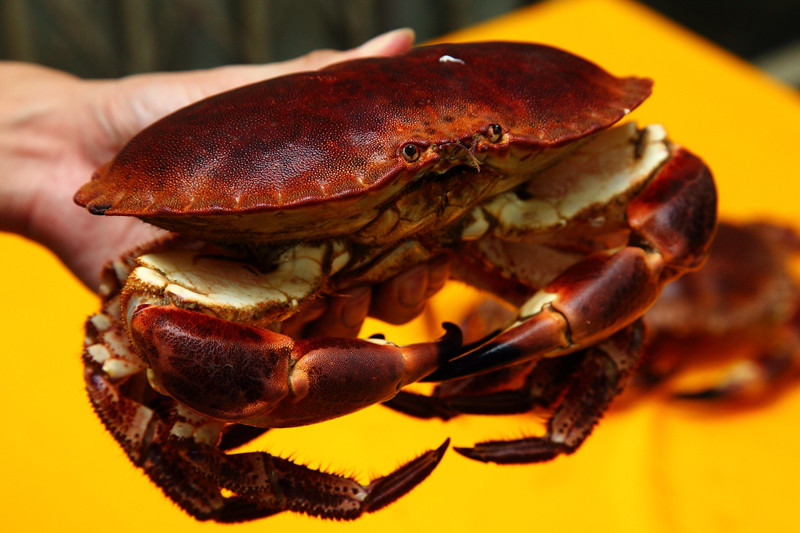 Freshness is guaranteed since the crabs are live, air-shipped from France in refrigerated containers. They are not as active as the mud crabs so it’s pretty safe to pick them up (if you have the chance) to feel them, and they are actually cold to the touch. 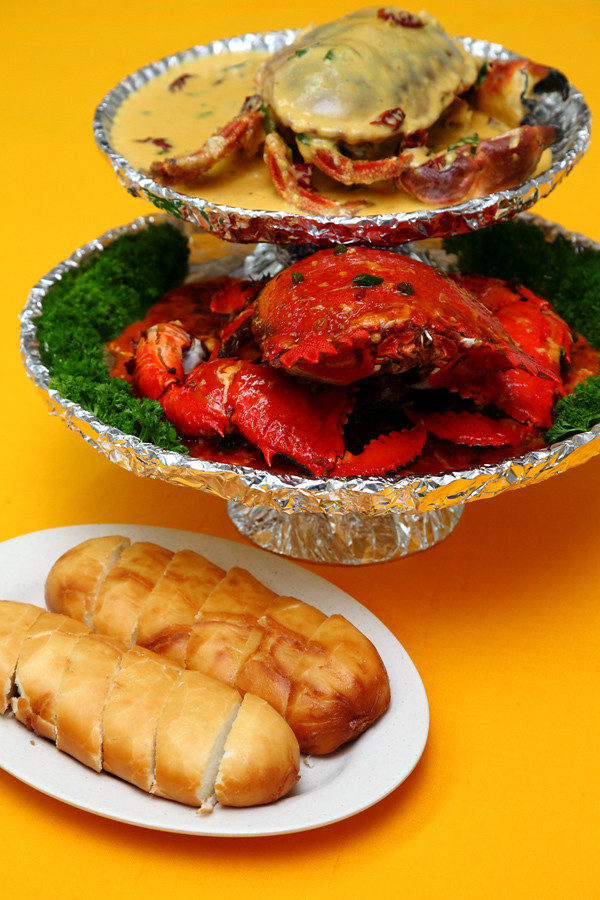 There’s also another type of imported crab; albeit frozen which is known as ‘Tiger Crab’ or ‘Coffee Crab’ in Hong Kong. But its real name is Spanner Crab and it’s imported from Chile. Both crabs were used to prepare two dishes in different flavours, one in creamy salted egg style and the other in a spicy and sour sauce.
Just to clarfiy this is actually a new dish on their menu called ‘当老虎蟹遇上法国面包蟹’ @ RM188 and when translated literally it means ‘when tiger crab meets French bread crab’. However, if you are not keen on trying both crabs in one seating, you are still free to get any one of them in a la carte basis. 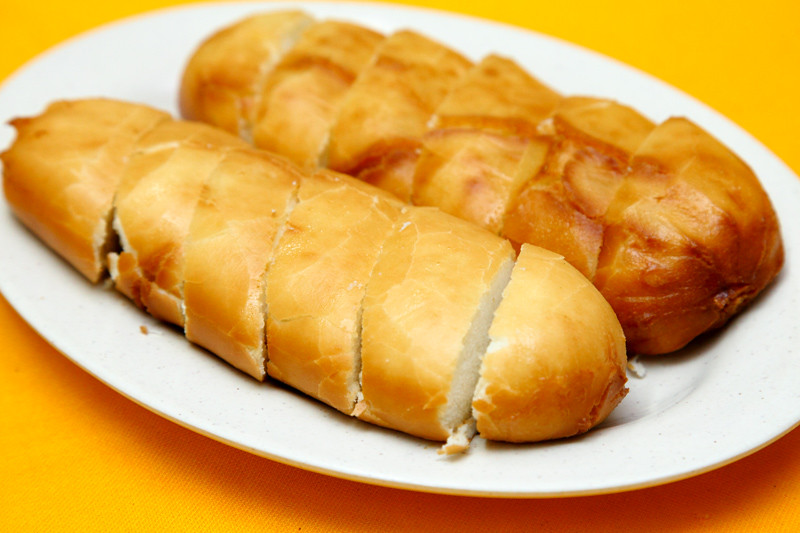 Instead of fried mantou, you get fried bread here to mop up the delicious gravy. Taste wise there’s not much of a difference except that the mantou would have more crispy surface area. 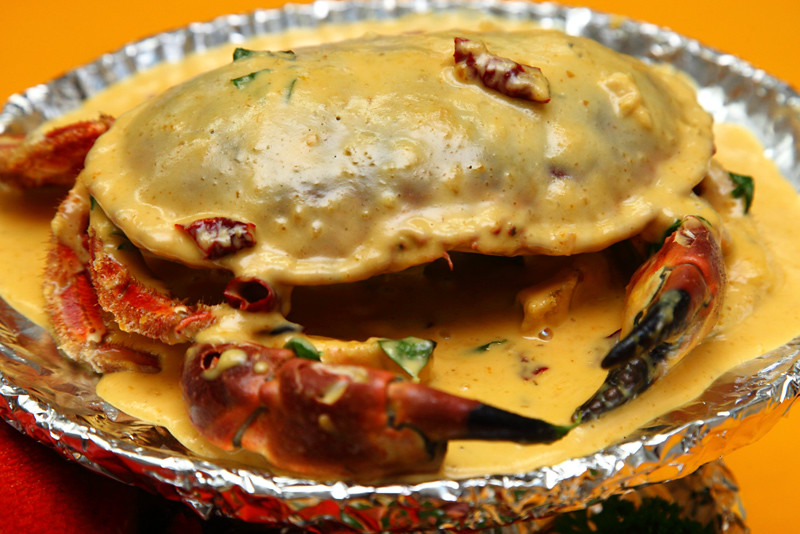 Here’s the French Crab in their signature creamy salted egg sauce. As mentioned before this dish is priced according to the number of crabs you order and not by their weight. But if you are wondering, they weigh around 1kg each and most of the weight comes from their thick shell.
Nevertheless, the flesh is firm and flaky because it was extremely fresh, and the roe (if you get a hen) was vibrant red with a rich, briny flavor. Compared to mud crab, brown crab has a pleasant and less sweet taste – similar to of a crayfish’s. 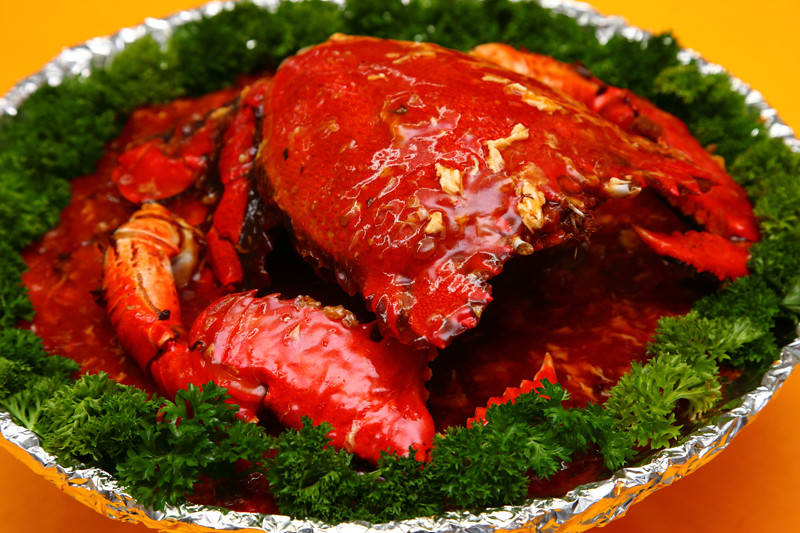 The spanner crab was suggested to be served in a spicy and sour sauce and I think that recommendation was spot on. For a frozen crab, this one is not too bad and you could still savour its unique flavour that is accompanied by a hint of nuttiness. But as you’d have probably expected, the flesh is just not as delicate and missing the flaky texture you usually get from a live crab. 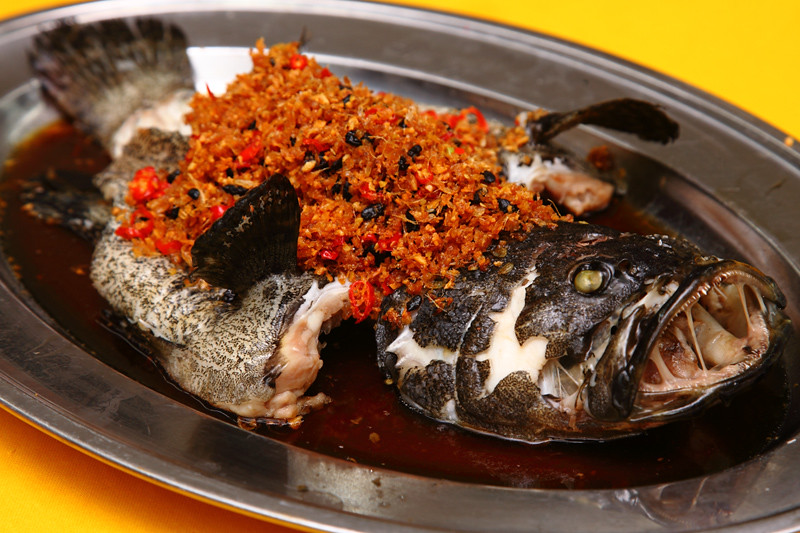 To celebrate their first anniversary, Crab Generation is running a promotion on their Dragon Tiger Grouper. Each fish, weighing between 1 to 1.2kg is priced at RM98 each until the promotion ends. The price is a steal based on the fact that the market price for a live Dragon Tiger Grouper goes for RM65 and above per kg. And the bigger it is the more expensive it gets.
Since the grouper was still live and swimming before going into the steamer, the freshness really comes through and won everyone over. The flesh was absolutely lovely too – firm and bouncy when you bite into it. With a fish as fresh as this there’s simply no better way to cook it besides steaming it. The topping, made up of fried minced garlic, ginger, black beans and ground prawn shells is brilliant as well and complemented the fish perfectly. 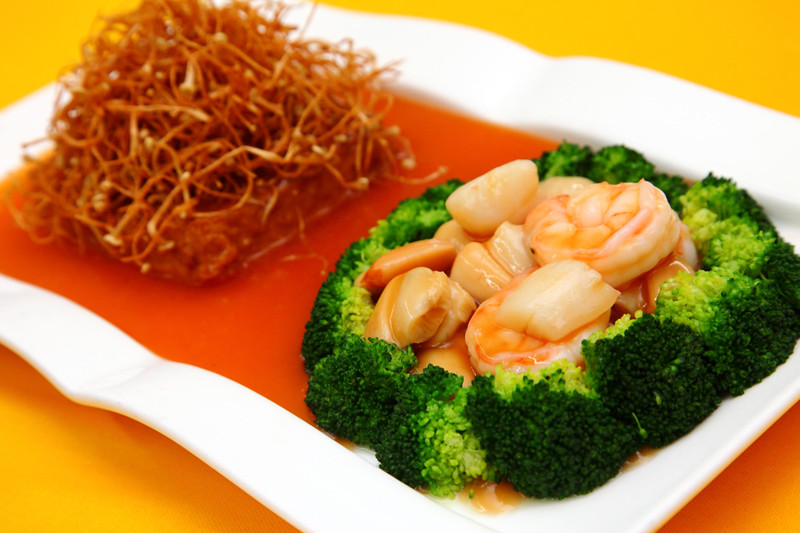 The traditional tofu dish is given a premium touch by adding assorted seafood such as large prawns, razor clams and juicy scallops in a ring of broccoli at the side. While the tofu itself (海皇豆腐) @ RM38 was enjoyable, the delightfully fresh and succulent seafood stole the thunder. 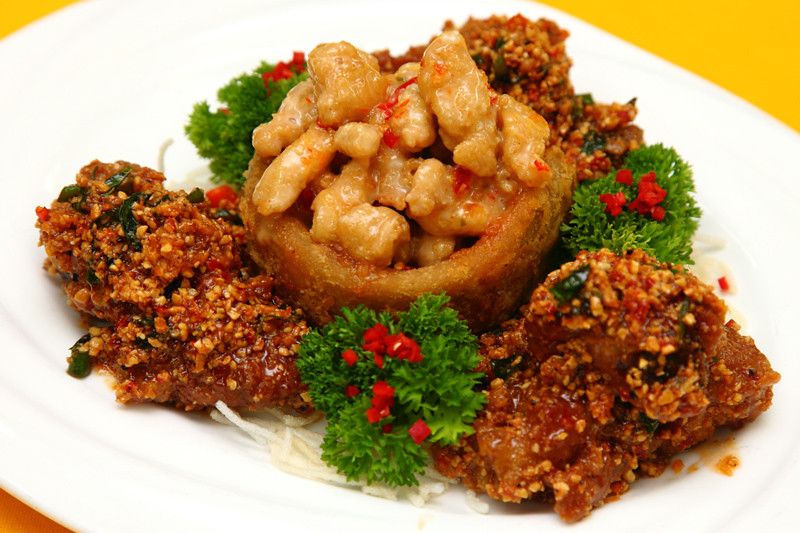 Now, this dish is an interesting one. It is called ‘世界末日’ (End of the World) and it’s a combination of chicken in Thai chili mayonnaise in a yam ring and sweet and sour pork ribs coated with crushed peanuts.
Everyone went ‘ohhhhhh’ after the boss explained the name behind the dish. Apparently, the yam ring represents an erupting volcano while the pork ribs are supposed to be the volcanic rocks. Are you able to visualize it? 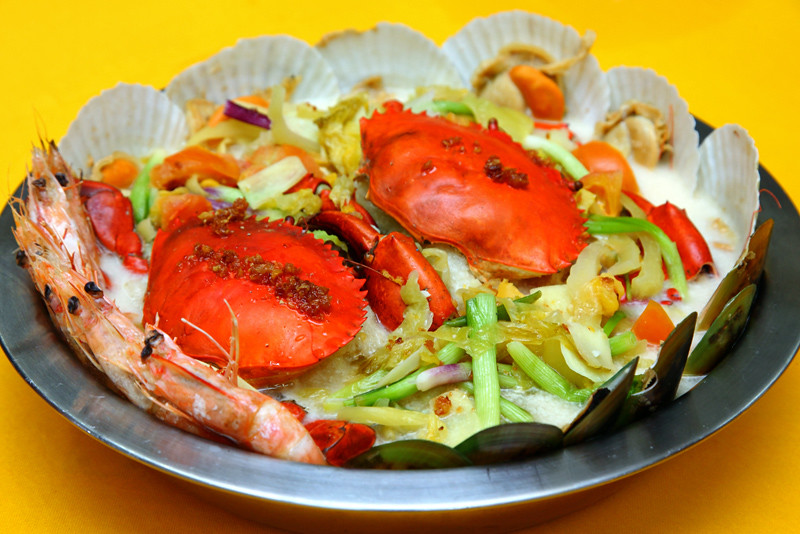 If you are looking for something extravagant, ‘海底世界’ (Underwater World) @ RM168 could be worth considering. If there’s any way to describe this dish, it’s a fish head mee hoon but overloaded with shellfish and minus the fish. I might be repeating myself here, but again all the shellfish served in the pot was very fresh.
Not to mention the soup was delicious too and it’s as good as any fish head mee hoon in town. The price tag might seem hefty but with all things considered, it’s still reasonable with all the large-sized scallops, Ming prawns, mussels, fish maw and crabs given. 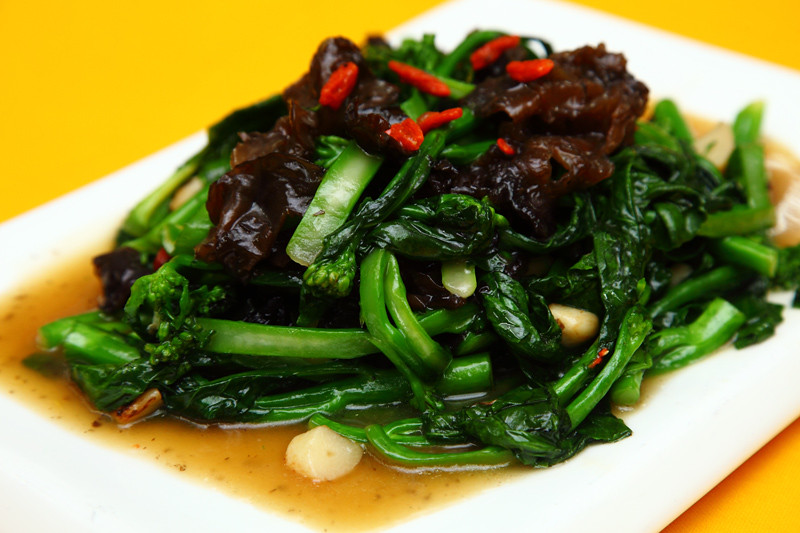 Last but not least, a vege dish for good measure. This stir-fried kailan appears ordinary but it was infused with yellow rice wine for an additional kick of fragrance and flavor. In Chinese this dish is called ‘黄酒云耳炒芥兰’ – RM18 for a serving. 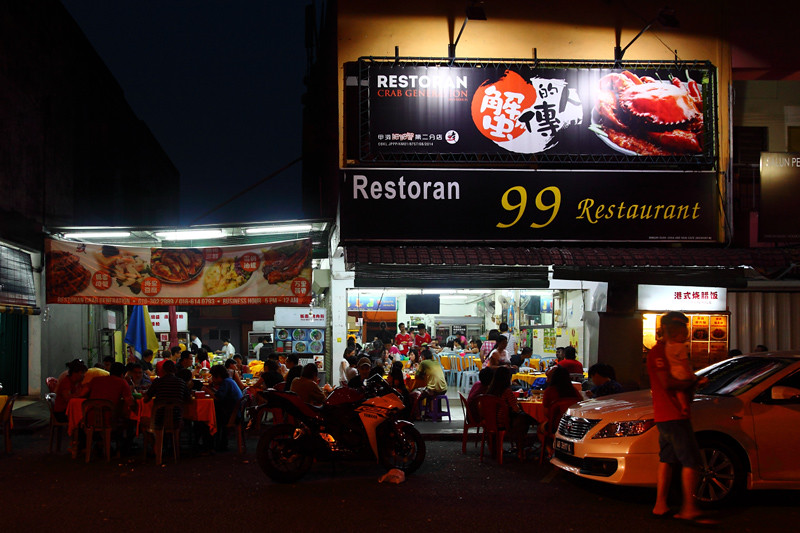 Overall the seafood meal was wonderful (I’d be lying if I said it wasn’t) and this was also the first time I tried brown crab. Although both the brown and spanner crab might not taste as great as the mud crabs because their flesh is not as sweet, it was still a great experience. Ultimately it’s like comparing chicken and duck – both are also birds but they taste different. Who knows you might like them? Never try never know!