Even if you are not a big fan of DC Comics, you must have at least heard of their inarguably two most famous super heroes – Batman and Superman. So while waiting for the new movies – Batman vs Superman: Dawn of Justice and Suicide Squad to be released in cinemas, you can always visit the DC Comics Super Heroes cafe at Sunway Putra Mall to keep your appetites wet.
Just so you know, this is a licensed dining establishment, in fact the second one in Malaysia. So it’s certainly not some ciplak cafe trying to ride on DC Comics’ reputation. From what I researched, a 3rd one is scheduled to open in Singapore next month. 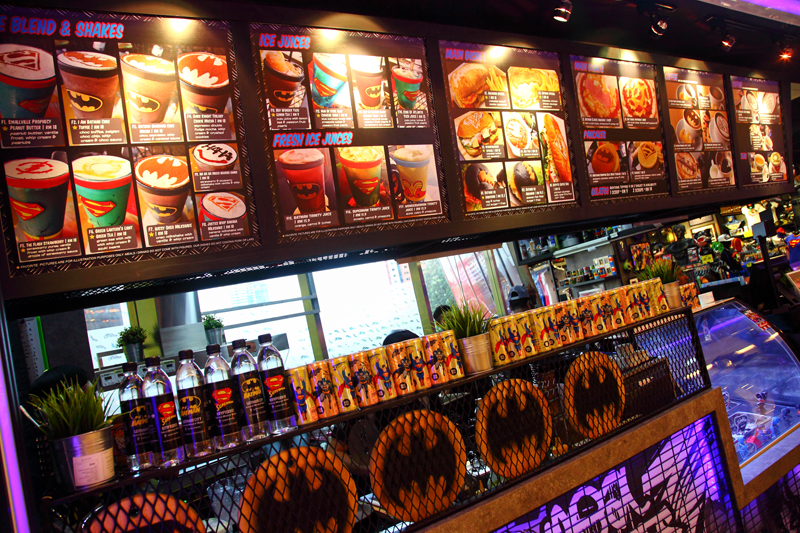 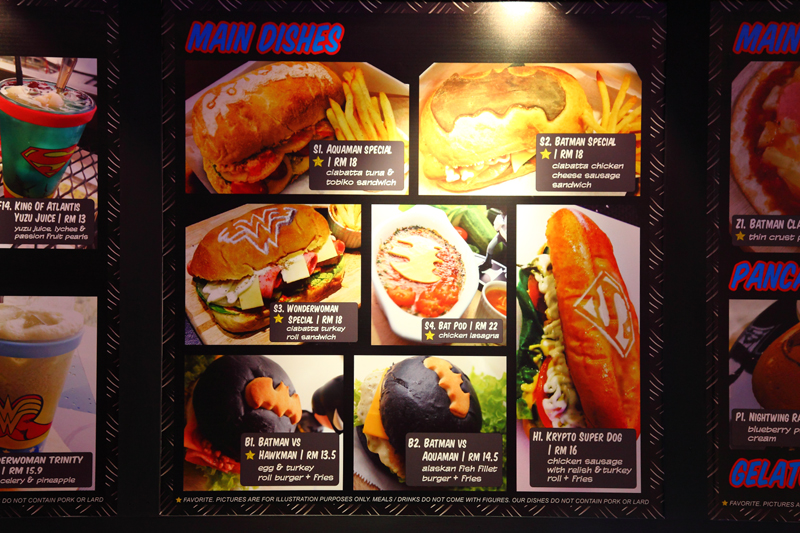 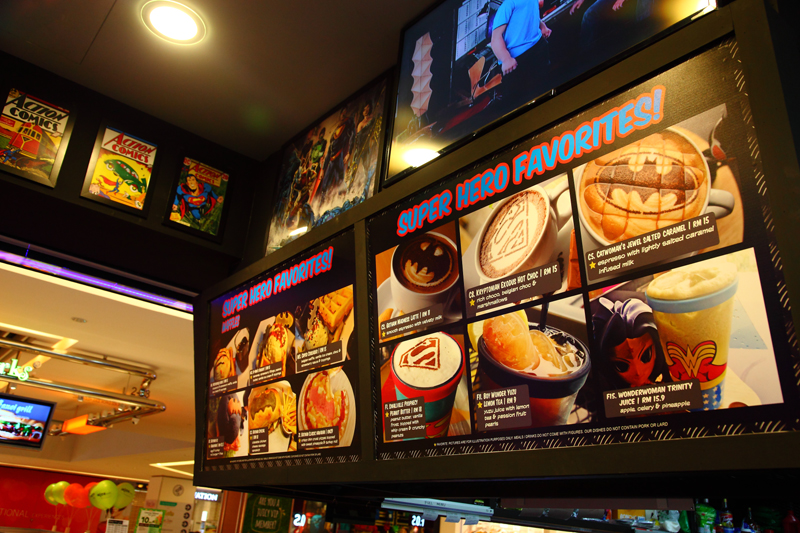 Food served here is inspired by your favorite superheroes like Aquaman Special which is a ciabatta tuna & tobiko sandwich while Wonder Woman Special is a ciabatta turkey roll sandwich. Then there’s the Batman vs Hawkman (egg & turkey roll burger + fries), Batman Pod (chicken lasagna), Krypto Super Dog (chicken sausage) and so on – you get the drift.
Besides having a cool name, the food also bears the logos and aesthetic of the characters, albeit a bit distorted from what I see in previous customers’ photos. Even the drinks are super heroes inspired so you sound really cool when ordering them. Don’t believe me? Try ordering the “I Am Batman Choc Toffee” then. 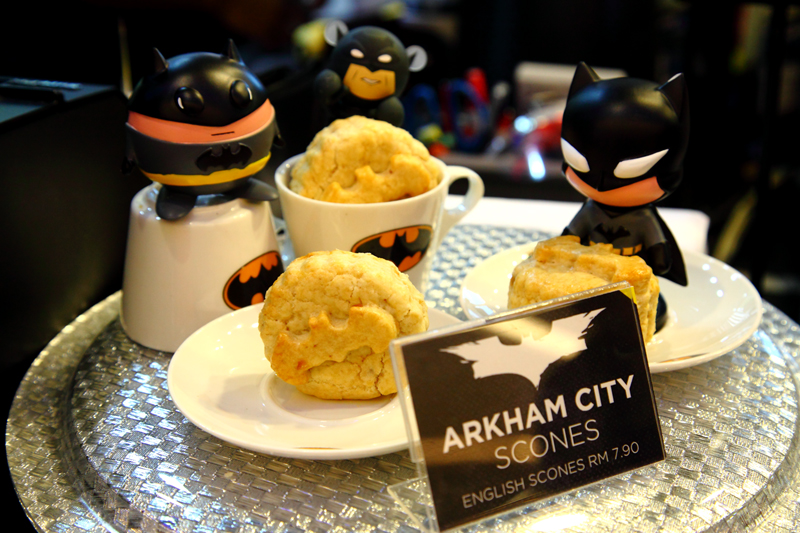 Too bad for us though, when we arrived at the cafe around 7pm we were told that they had run out of food so only drinks were available. Apparently, there was a huge crowd during lunch time and they practically ate everything in the cafe. Even these Arkham City Scones were not for sale because they were there for decoration purpose only. Just FYI, the main dishes here are mostly fast food oriented with a handful choices of burger, sandwich and pizza. 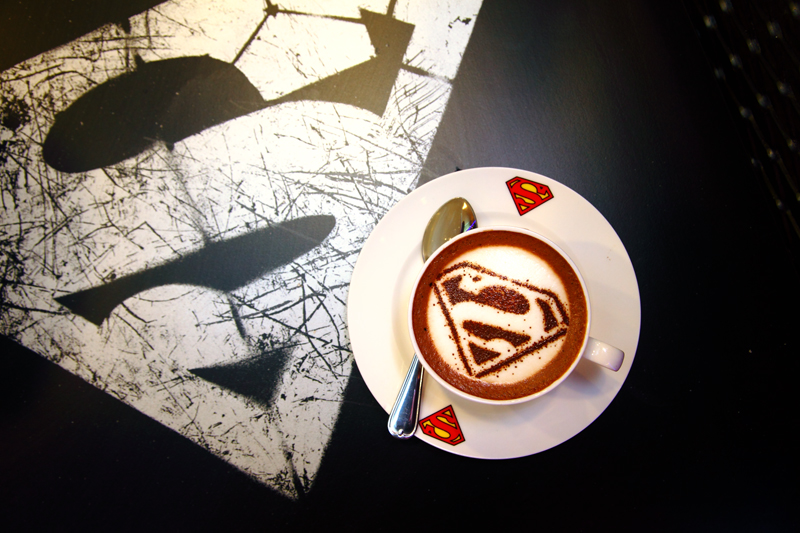 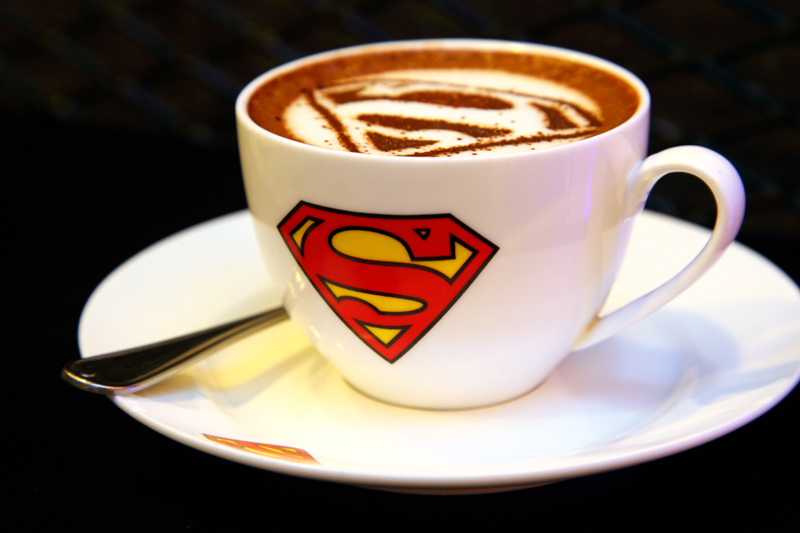 Well, we were determined not to go home without trying anything so we had the “I Am Batman Chocolate Toffee” @ RM18 and the “Smallville Cafe Mocha” @ RM15 – basically one each from Batman and a Superman. If you look closely, you will notice that the Superman’s logo is not quite right because it’s inverted. I am not sure if I could actually request for a refund, lol. But nevermind lah. 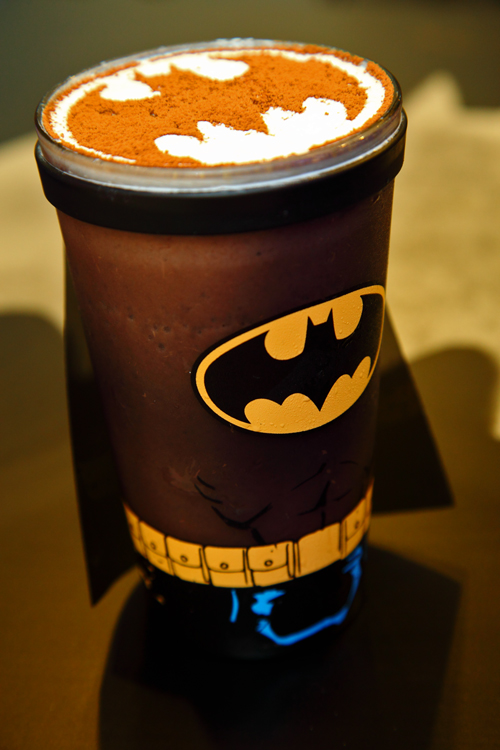 I have to say, the cup for the Batman drink is cool, can you see it even has a cape on it? And frankly I think the prices are a bit ridiculous but understandable due to the royalty dollars they have to pay. That said, I did not expect a lot from the drinks but they turned out to be pretty good actually so it’s a pleasant surprise. The chocolate toffee was rich but not overly sweet while the mocha was smooth and enjoyable. 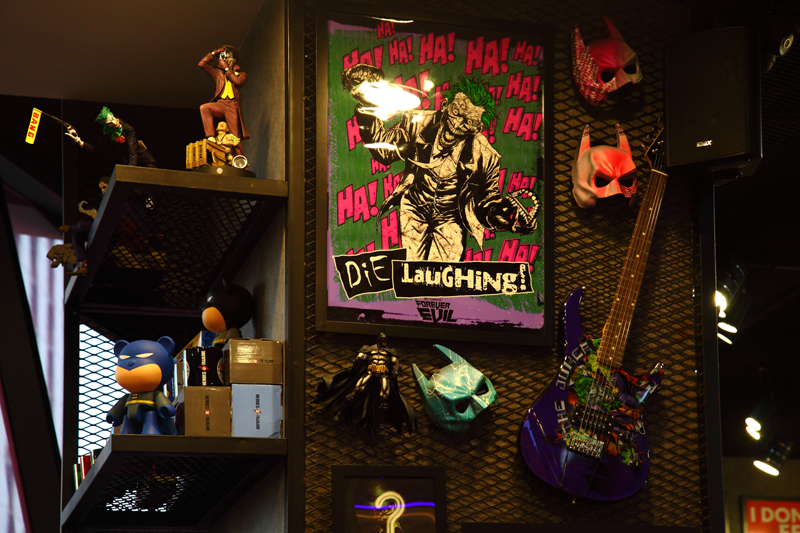 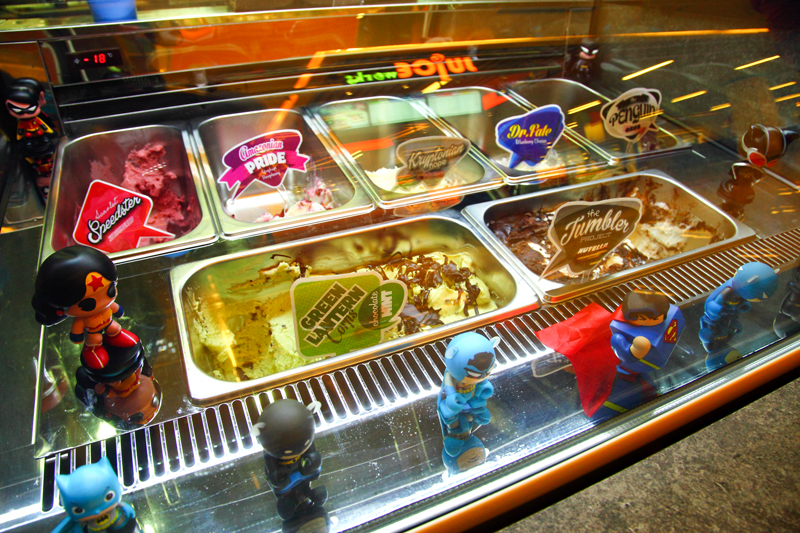 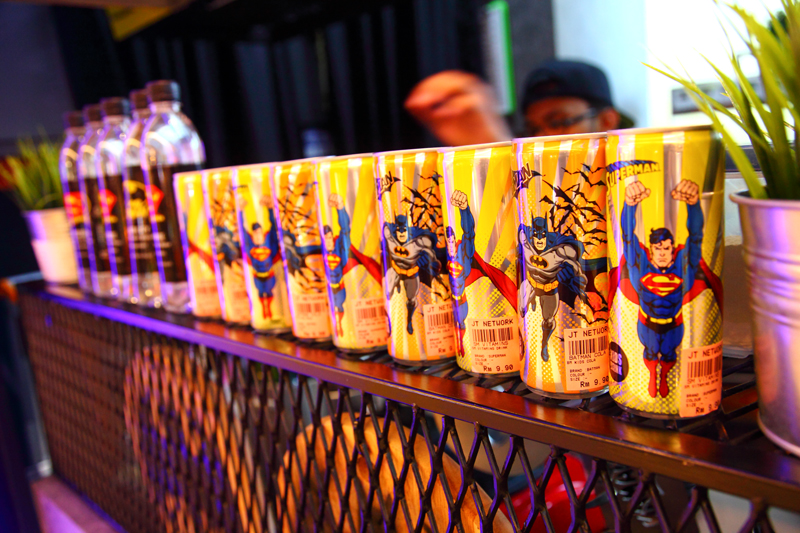 All in all, If you have the time, I do recommend you to drop by the DC Comics Super Heroes cafe especially if you’re a fan. The unique decor and menus are nicely done, so much so that just to see them alone is worth the trip.
Lastly, if you intend to have a meal here, just come early to avoid any disappointment. Parking is free for the first few hours (until October) with any amount of spending at any outlet in the mall, so even more reasons for you to come. 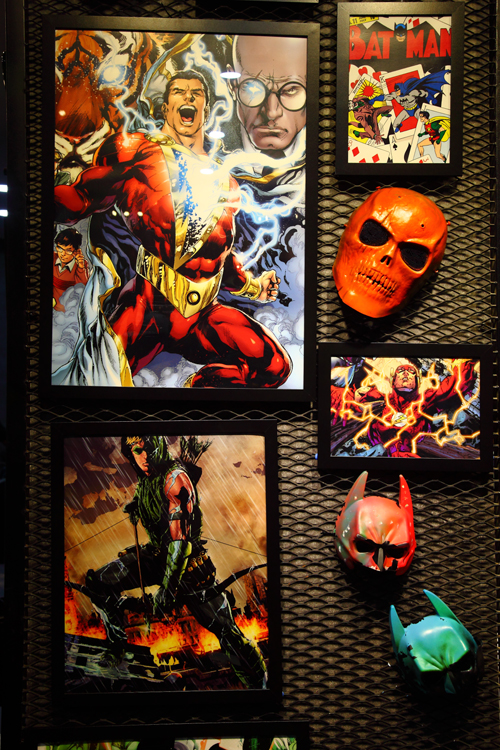 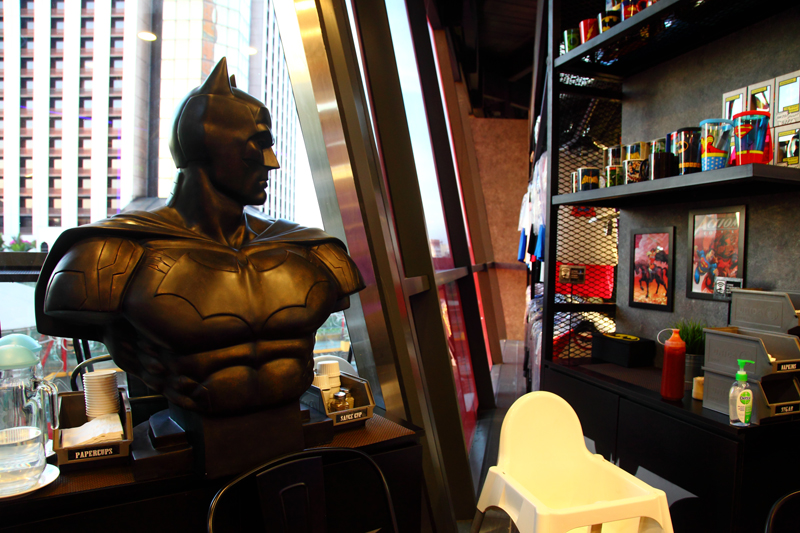 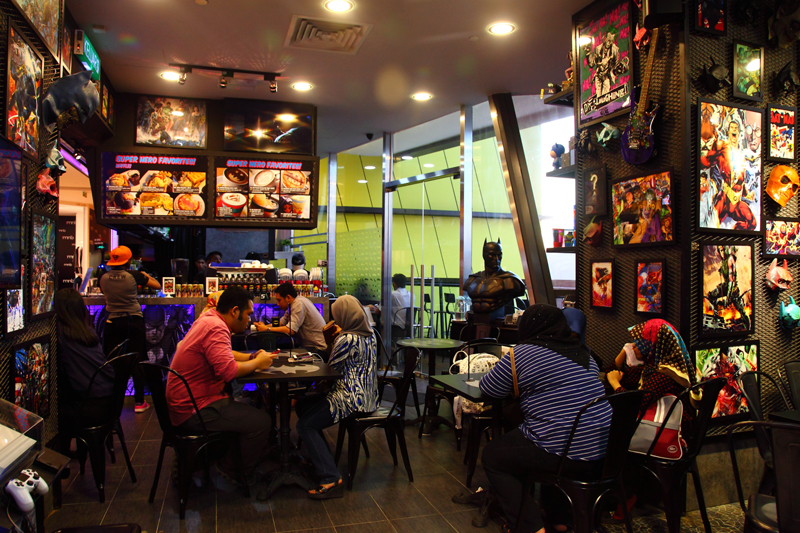 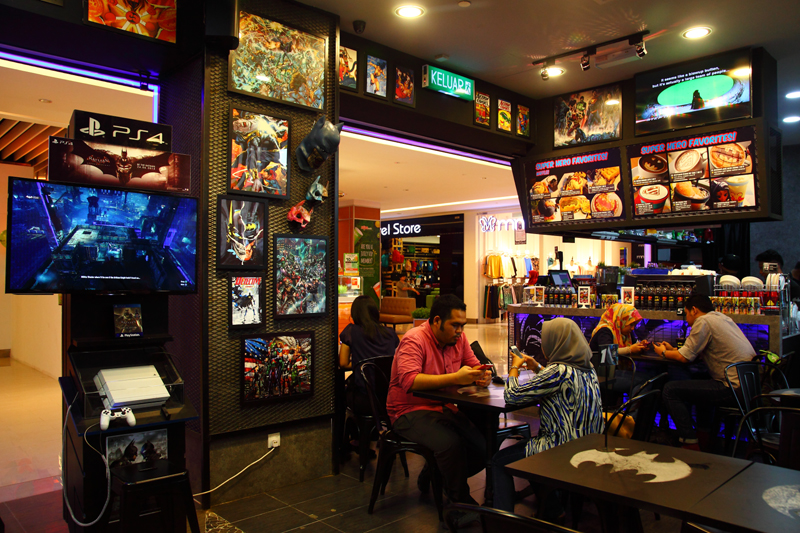 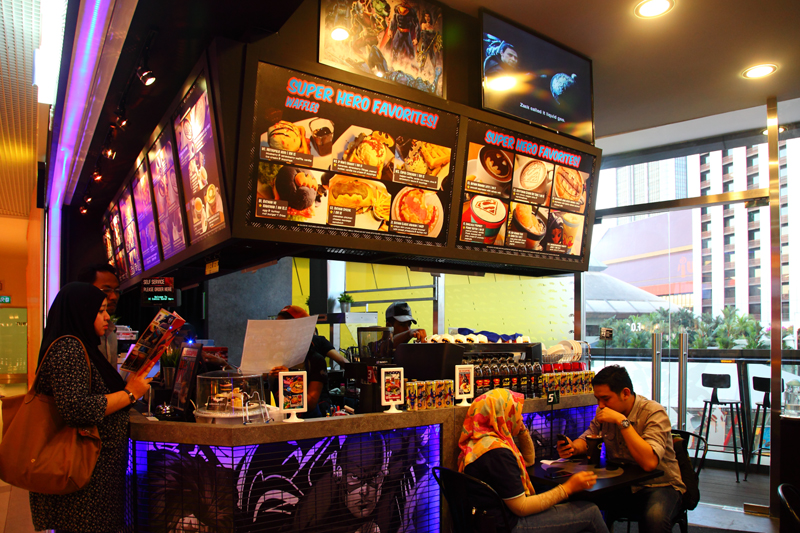 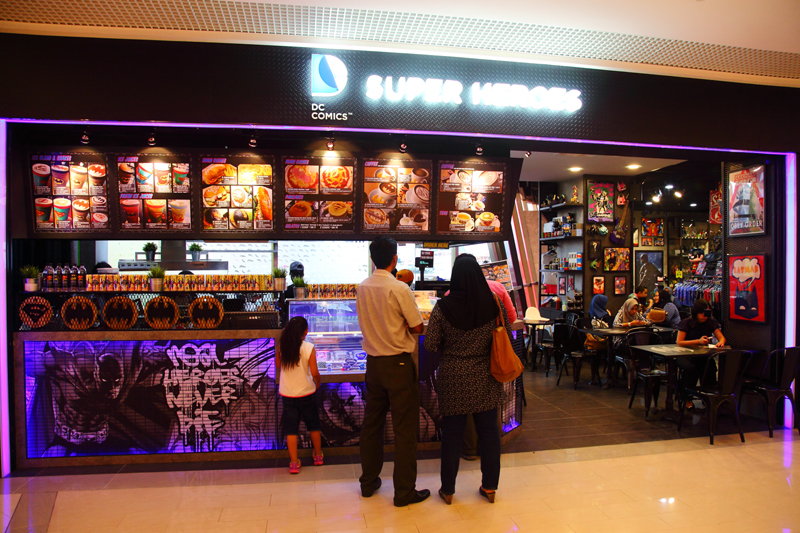