** THIS RESTAURANT HAS CLOSED DOWN **

A new management recently took over Fatty Cat Steamboat at Sunway Mentari and it is now known as Dim Sum King vs Steamboat Queen. The idea of offering both cuisines under the same roof came from the owner himself, who already owns an established dim sum restaurant in Sarawak. Currently, dim sum is available from morning to lunch hours while steamboat is available during dinner time. 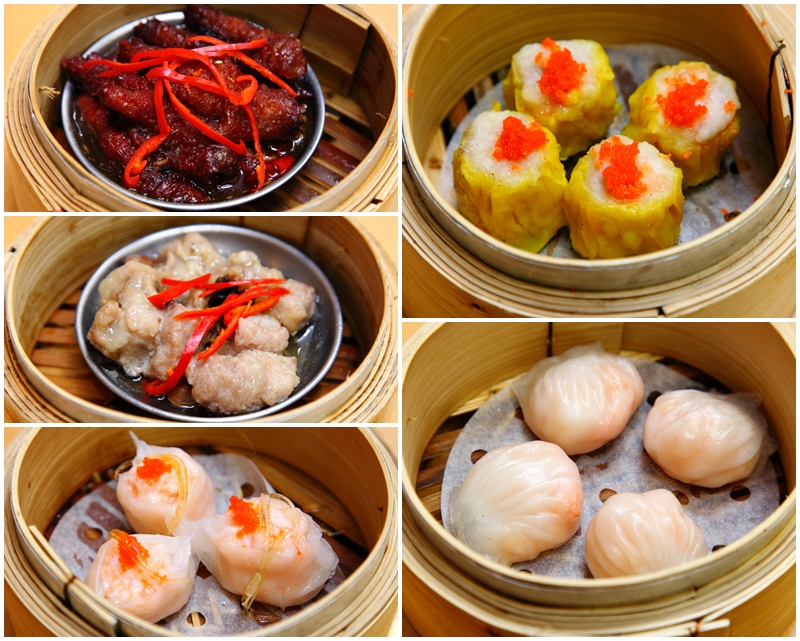 With over 20 years of experience under his belt, the dim sum sifu has worked in some of the finest hotels in KL as well. So, you can be assured of good quality dim sum being offered here. The prices are reasonable too considering every item costs RM4.60, regardless of which you pick.
Compared to most places that offer only 3 pieces in each basket of Siew Mai and Har Gaw, you get 4 pieces here. We were satisfied with the taste too, and none of the dim sum we had was bad. Everything tasted exactly like how they should be and we especially enjoyed the Steamed Spare Ribs (with salted peanuts) and Har Gaw. 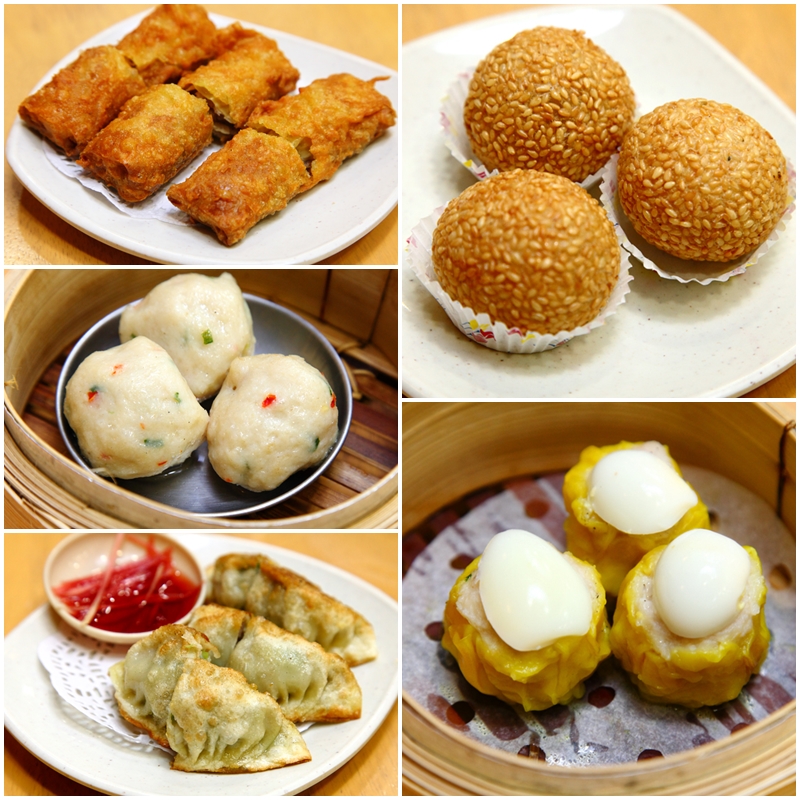 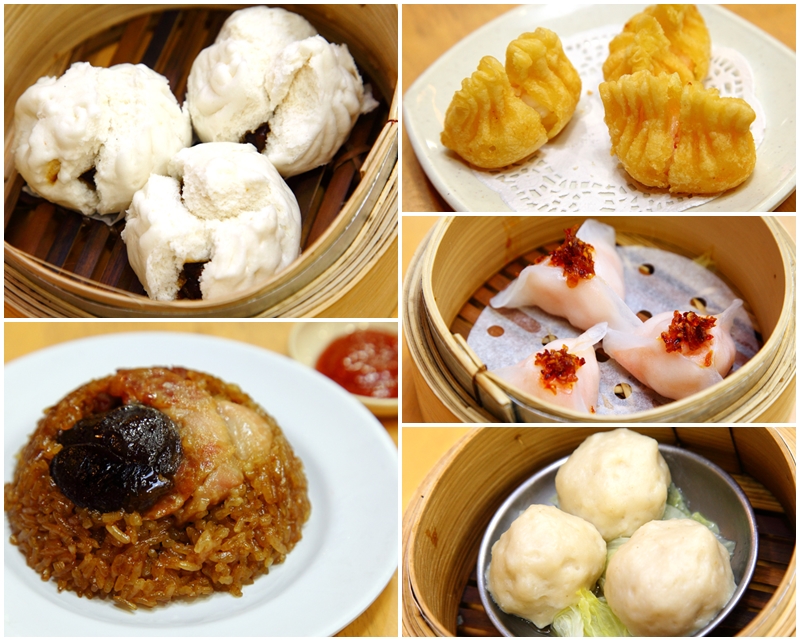 In total, there are around 50 different dim sum to try and that’s also inclusive of the handful of porridge and desserts they have. Despite the huge selection, there’s nothing really new or fancy about their offerings, as they are quite commonly found at other restaurants. Nevertheless, the dim sum items are well-prepared with good ingredients and you could see the effort put into making them. 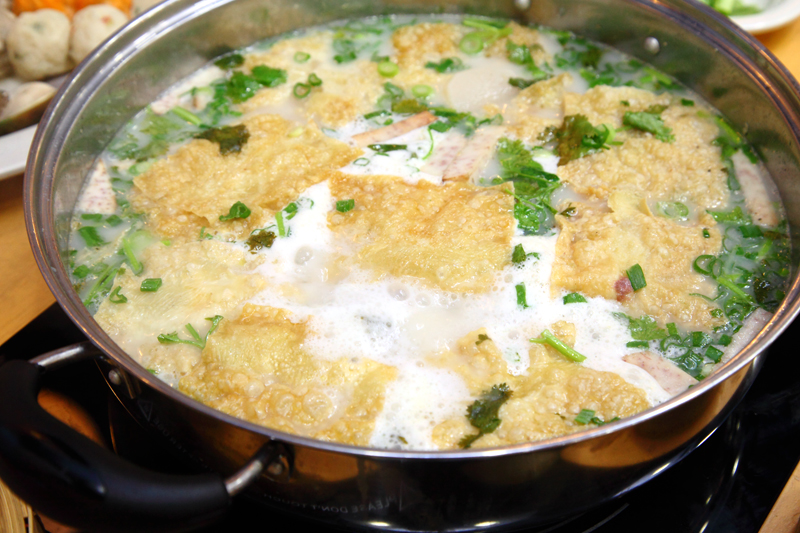 Now for the steamboat, it’s eat-all-you-can for RM38/pax and you have three soups to choose from: pork bone, tom yam or porridge. We have always preferred the clear ones so we opted for the pork bone soup. It was prepared a day in advance with vegetable stock, ham, pork bones and some milk for a slightly smoother and richer flavour.
One good thing about the steamboat here is that even though the soups are made with natural ingredients without any added MSG, you don’t have to pay extra for them because they are already included in the price you paid for. 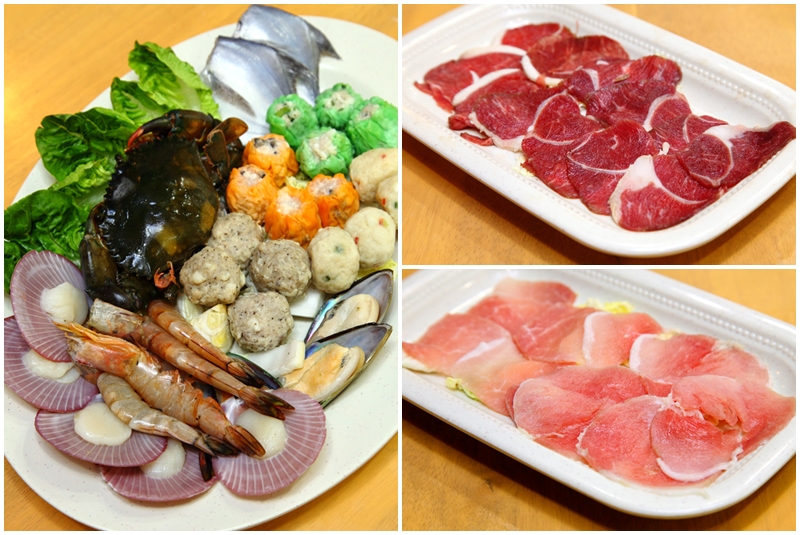 It’s a common perception that the seafood that comes with any eat-all-you-can meals are not as fresh. To be frank, I had the same feeling initially. But that changed after we had our meal here. Among the dozens of steamboat restaurants I have eaten at before, Steamboat Queen might very well be the first to meet my expectations for good and fresh quality seafood in their buffet spread. 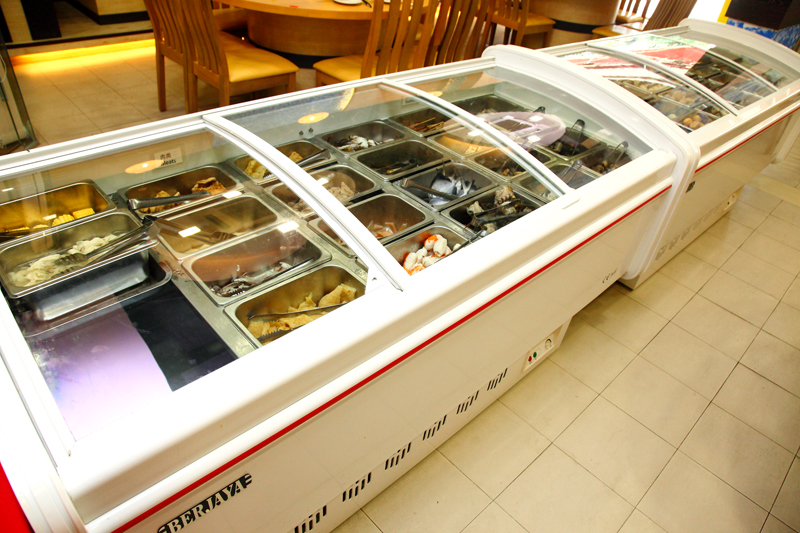 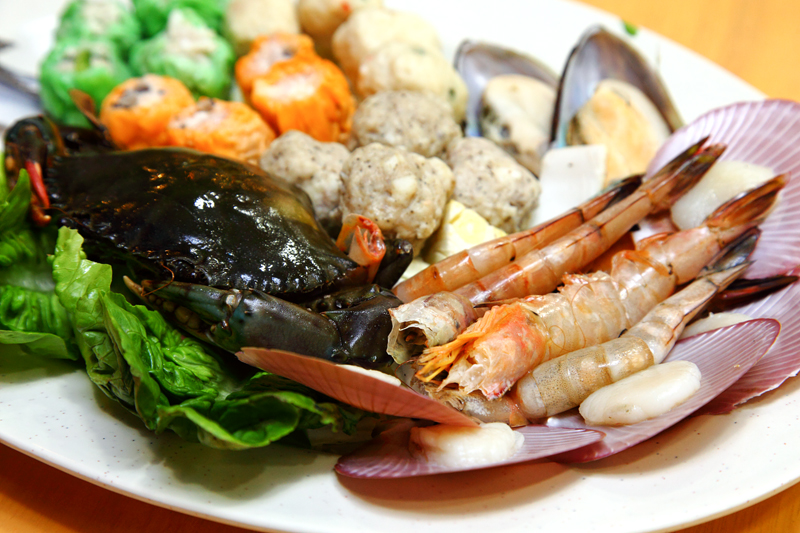 Quite a number of ingredients you get for the steamboat are imported, such as the beef, lamb and mussels – these are from New Zealand. And the most premium seafood you could get here has to be the oysters which are shucked and replenished as soon as they are out. 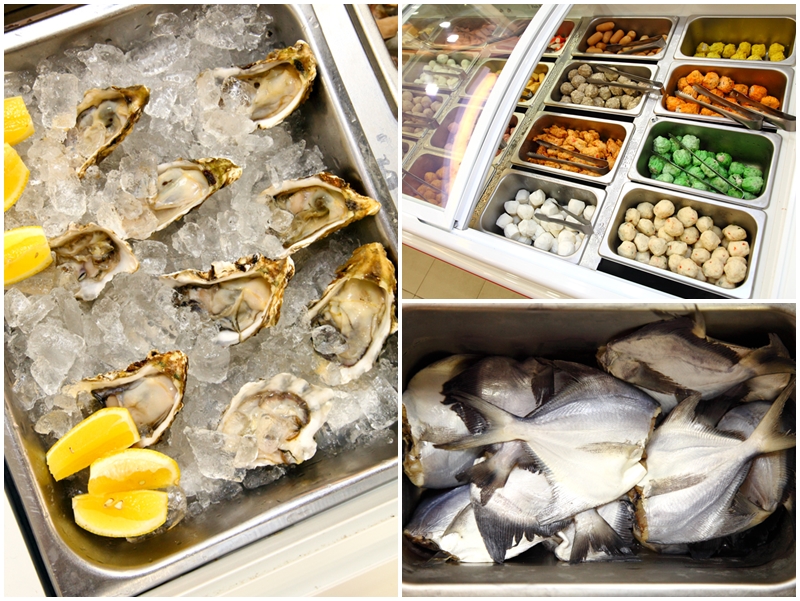 How often do you get fresh oysters at a normal steamboat buffet? This has got to be the first for me. They also try to minimize the number of processed food by making the dim sum and meat balls themselves by modifying the recipes to use more mushroom and black pepper instead for flavour. 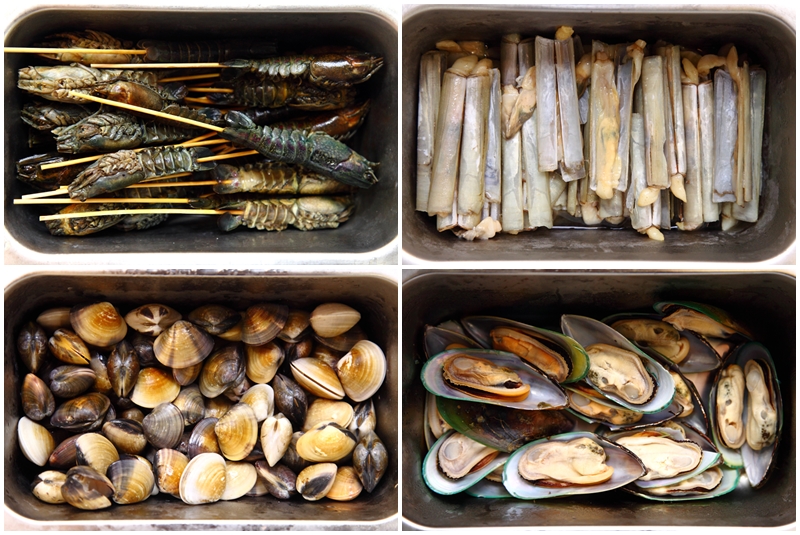 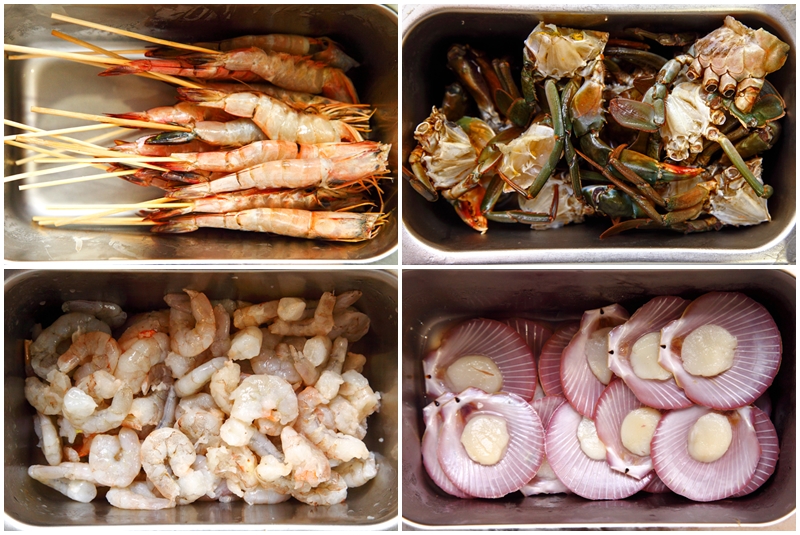 Besides NZ mussels, some other more premium seafood available include baby lobsters (!), bamboo clams, sabak clams, mud crabs, ming prawns (the expensive, sea type), peeled prawns (those used for dim sum filling) and scallops. For the price of RM38/pax, the value you get is more than a deal, it’s almost a steal.
Just the crabs and prawns alone could justify the price – moreover you get oysters, premium quality, delicious and MSG free soup, free wifi, air-conditioning and side dishes as well.
And before I forget, you could request them to prepare you a seafood dish based on the ingredient you pick. For example, you could pick some crabs and have them cooked in Kam Heong, salted egg or sweet and sour style. The catch? It’s only limited to 1 dish per table. 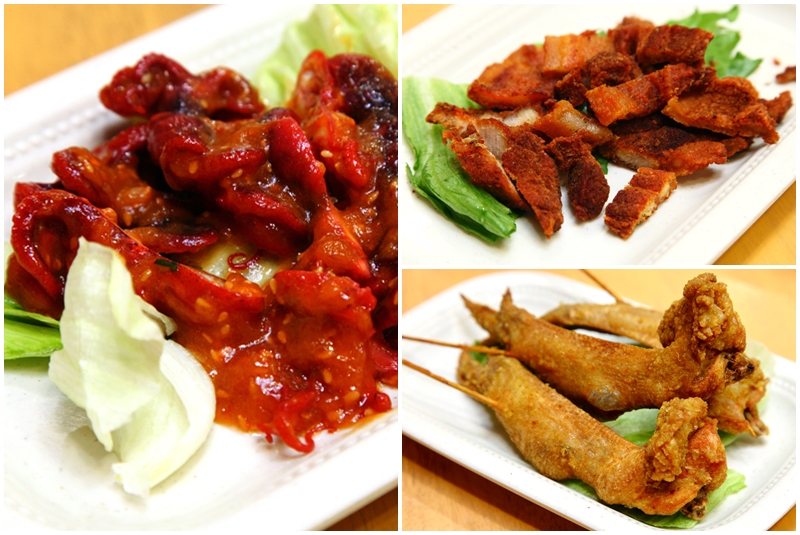 Some snacks and appetizers to enjoy while waiting for your food to cook include their homemade chuka idako (made with bigger than average octopus), fried chicken wings and fried Nam Yu pork belly. I thought the Nam Yu pork belly was nicely cooked to a crisp and cleverly seasoned in such a way that it wasn’t too salty – the taste was just spot on, perfect for snacking. 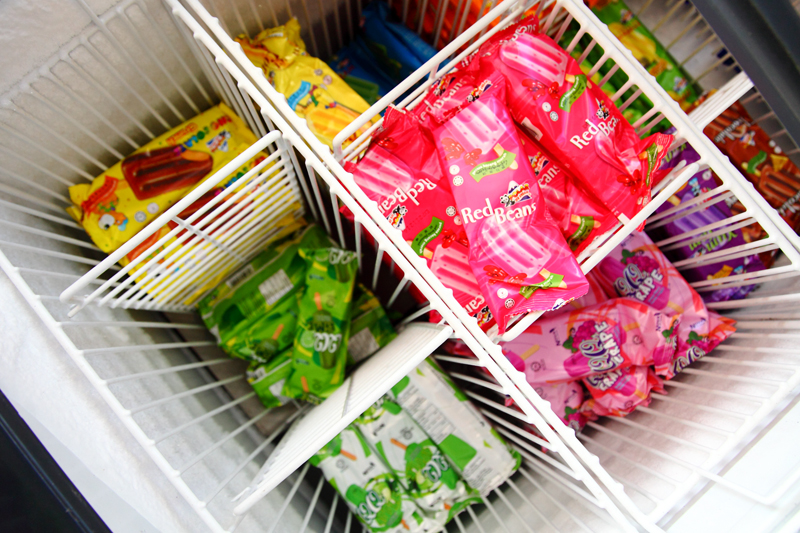 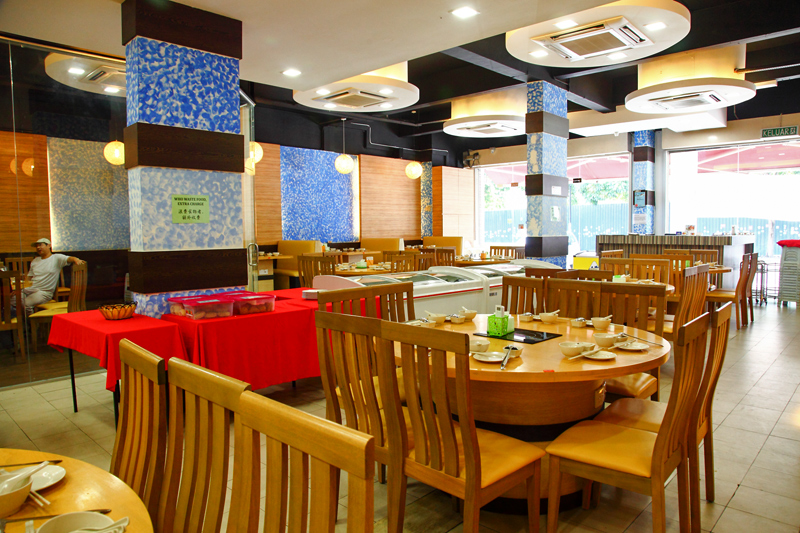 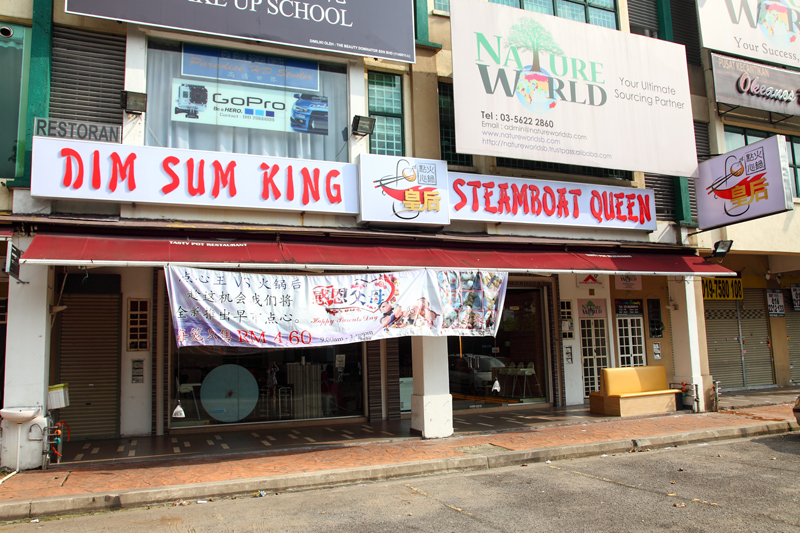 Overall, we enjoyed our meal at Dim Sum King vs Steamboat Queen immensely and could not recommend it enough, especially if you love steamboat. Besides dim sum and steamboat, they also offer a highly affordable lunch menu that features single rich and noodle dishes priced between RM5 and 7. If you are looking for value for money, you should definitely come here.

Bar-B-Q Plaza Eat All You Can Refill Promotion