Lau Sum Kee Noodle House at Sham Shui Po is famous mainly for two things: ‘Ha Zi Lou Meen’ (Dried Shrimp Roe Noodles) and their succulent homemade ‘Sui Gao’ (Dumplings). There aren’t many places in Hong Kong that still serve this noodle, which explains why Lau Sum Kee is highly frequented despite being small and cramped. Their competitive pricing is also another reason for their popularity, with noodles priced only between $20 to $40. Here’s their signature noodle in its simplest form – just noodles seasoned with lard, sauces and topped with lots of dried shrimp roe @ $30. It is visibily obvious that Lau Sum Kee’s noodles have thinner strands when compared to the other Wanton noodles (at least those that I have tasted in Hong Kong). Texture wise they are crunchier too, which is something that you either love or hate, since it could taste dry and tough for some. I am also quite certain that most Malaysians would find the shrimp roes’ savoury flavor to be an acquired taste. The umami of the roes are so rich that it tastes somewhat salty and fishy for first timers like us.
Anyway, there are many other toppings available such as wanton, beef brisket, ‘zha jiang sauce’, mushroom and etc if you do not fancy shrimp roes. But then that would defeat the purpose of eating here altogether. The ‘Sui Gao’ here is very delicious, each of them has is huge and has a couple of fresh and crunchy prawns wrapped inside. We enjoyed this a lot. OK, to be honest we were not really floored by their ‘Ha Zi Lou Meen’ because it tasted entirely different from anticipated and we are simply not accustomed to such strong flavor. But hey, not all new experiences are sure to be good right? At least it was a unique dish unlike anything we have tried before. 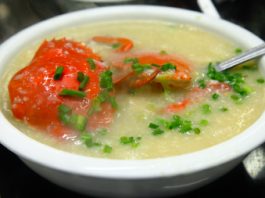 Eat September 11, 2011
ABOUT US
VKEONG.COM - Malaysia Food and Travel blog with reviews of restaurants, hawker and street food in KL, Penang, Melaka and beyond.
Contact us: vkeong@yahoo.com
FOLLOW US
© VKEONG.COM - All Rights Reserved