There’s a famous Indian Rojak @ Pasembur stall in Kepong that draws long queues as soon as the stall starts selling. It doesn’t even have a name! So, I had to see it to believe it. Pasembur is also known as Malaysian Indian Salad. It usually consists of shredded cucumber, bean sprouts (taugeh), beancurd (tau fu), prawn fritters, hard boiled egg, potatoes or yam and sotong. The preparation is very simple.. just chop all the ingredients, mix them up and serve with the sweet and spicy nutty sauce.

We had two plates and another to take away and it cost RM11.50. I can’t work out the exact price for one because all our orders were different. Some had extra prawn fritters, some had no sotong lol. The portion may look small, but it was actually very fulling. When I arrived there was really a long queue. And many of them take away at least five or six packets each! So, waiting time is quite long. The uncle is very nice and polite :D When I was queuing up I could smell the pasembur sauce’s aroma even feet away. It made me really impatient to try it lol.

The stall is said to open from 2pm onwards and could finish before 3.30pm. That’s how brisk their business is. This no-name stall is located beside the durian stalls in Kepong, just opposite the big church in front of the old roundabout. If you are lost, just ask anyone about the famous Indian rojak near the durian stalls! 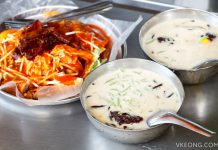 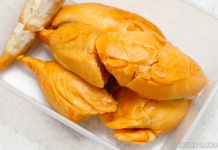 Tai Zi Heen Eat All You Can Chinese Dinner @ Pullman...