For those who want to try something different in steamboat rather than using the usual clear broth or tomyam soup for the soup base, porridge steamboat might be a good alternative. It is not something new in Selangor/KL, but it was new for me from Penang. The first time I tried porridge steamboat was a few years ago in Eastern Delight @ Sri Petaling and it was great! For this post, I didn’t go to Sri Petaling though, I went to Farmland Porridge Steamboat Restaurant in Serdang instead, which shares the same level of popularity with the former. Farmland serves steamboat sets and ala carte items can be ordered separately as add-ons. A two-person mixed set that comes with some seafood, vegetables, meat balls, dumplings and fish noodles cost RM27.80. The portion wasn’t too big but it should be enough to satisfy two average eaters. The seafood was fresh and succulent, definitely the nicest thing about dining in ala carte steamboat restaurants. You just couldn’t get as fresh seafood in buffet style steamboats. And the meat balls and dumplings are prepared from Farmland’s kitchen with their own recipes. So, there’s minimal factory processed food consumed. Even the vegetables tasted nice and sweet after cooking in the porridge broth. Clay pot is used so the food won’t lose too much moisture and to prevent the broth from drying up too fast. By the way, an extra RM3 will be charged extra if porridge is chosen as the soup base. The broth is quite watery at first, but after cooking for a while the texture will become smooth and tasty after absorbing all the ingredients’ flavors and goodness. Sadly, the same couldn’t be said for the fried youtiao @ RM4. It was stuffed with a lot of meat and was extremely crunchy alright. But, it tasted way too salty, even after being “washed” in the porridge for a very long time. This was mentioned to the boss when we paid for the meal, I hope they take notice. In overall, I preferred Eastern Delight’s porridge steamboat. It was slightly cheaper, had more choices and somehow felt more authentic to me. I hope the restaurant would still be there when I return next time. Anyway, Farmland’s main branch seems to be at Jalan Pudu and most people went there instead. Maybe the porridge steamboat tastes better there? I dunno, lol. 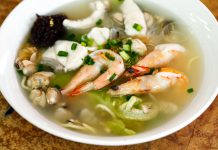