I only have three words to describe Foh San Dim Sum Restaurant: ‘so damn crowded‘. This is not a complaint ok, just an observation. Customers queuing outside the restaurant for dim sum before 8am. The chaos inside the restaurant. Number of customers standing could easily match those being seated. Your seat hogging skills have to be very good to ‘survive’ in here lol. I even saw an uncle reserving a whole table for his not-yet-arrived-big-family. So, being thick faced is the other requirement. Look at how the customers were staring at the tables lol. They were hoping for you to finish ASAP and just get up from the table and leave. It was a really unpleasant experience with so many pairs of eyes looking over your shoulder while you eat with their hearts thinking “Oi, faster finish and go away la. Wah still take photos ah? Wah lao once not enough, take twice somemore! Never see dim sum before meh? Wah wah wahhh” lol.
So, no matter how good the dim sum, for me it’s pretty pointless. Because how on earth are you going to enjoy it? Even the takeaway department was overwhelmed. Is this an everyday scene in Foh San Restaurant? Seriously, I have never seen any dim sum restaurant doing such good business. Generally the dim sum was good, very authentic and traditional. But maybe because of that, choices are a little too limited. The sifu’s skills must be really good to produce Har Gao like these with super translucent dumpling skin that didn’t break easily. Impressive. I had really high expectations before coming, mostly due to the many raved reviews about Foh San’s Dim Sum being the best in Ipoh and Malaysia. But honestly, I wasn’t as impressed as the others seemed to be and even left a frustrated customer because of the crowd that spoilt our mood.
Hmm I also don’t know what to say, didn’t expect a restaurant doing overly well to be a turn off lol. Anyway, next time I will come at 6.30am to avoid the crowd haha! 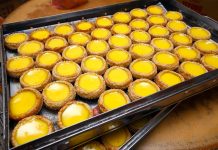 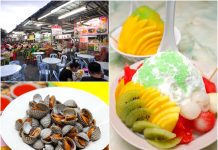