Went back to BM recently and managed to find some time to visit AEON Seberang Perai City again. Besides shopping, another reason was to try one of the restaurants new to me. After excluding the Japanese and Korean restaurants, we were down to either Food & Tea or Hongkie Recipe. In the end, we decided to dine at Food & Tea since we have tried the latter before at E-Gate.
We thought we made the correct decision judging on the number of customers at the restaurant compared to the rest. Even the menu looked pretty good with plenty of food which seemed reasonable priced. I had a recommended drink called Pineapple Cubes in Coconut Milk @ RM4.80 while SL had the Purple Rain (some sort of blackcurrant smoothie) @ RM6.30. Oh, the pineapple drink was surely a tempting thing, taste wise it was pretty okay too. If only they had hollowed out the pineapple properly and given more fresh pineapple cubes, then the drink would have been better. I only hope they don’t reuse the pineapple for hygiene reasons. On the other hand, Purple Rain tasted like something made from juice powder.. not recommended. A starter we had was the Seafood Salad Roll, which was a recommended item. They come in four pieces and specially blended mayonaise as the dipping sauce. And according to the menu, this is a best-seller (RM5.80) Prawn and some crab filament are wrapped in each salad roll, deep fried to crispy and golden brown. I thought they tasted ok after the first bite but the taste got worse on the subsequent bites, I don’t know why. Barely finishing the second piece, I already wanted to stop and move on to other food (too oily maybe?) Then came SL’s Sweet & Sour Pork Skewers with Ramen Noodle @ RM6.80. As interesting as the concept of combining ramen and pork skewers might be, it was screwed up by the noodle’s weird tasting sauce. I honestly don’t know what was on the chef’s mind when he invented the sauce. It had all the flavors of sour, spicy and sweet – like mixing Sichuan sauce and Kimchi together omg. So bad I would use the words 不三不四 to describe it in Chinese. Lastly, Smoked Ham and Cheese Focaccia @ RM5.50, which is basically a toasted focaccia bread topped with lots of cheese, ham and tomato paste. I didn’t especially enjoyed it since I found it to be so-so at best. Gimme a bread, some cheese and tomato paste and I bet I can prepare something that taste similar, if not better than this, lol. Although I have only ordered a few item off the menu, I can already safely conclude that I won’t be a returning customer. Not only the food sucked, service was bad too. And it would take a really persuasive man to convince me to dine at Food & Tea again, even just for a yam char session.
GPS Coordinates: N5 22.219 E100 26.393 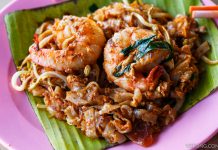