Hi guys do you notice something new on my blog’s sidebar? There’s a list of food I have yet to blog about, which has been accumulating since last year lol. A rough estimate would be 50 posts, and that number excludes my travel related posts to Melaka, Cameron Highlands and Sabah omg.
Based on my current update frequency, the backlog of posts would take at least 5 months to clear lol. Anyway, I was at Clan Restaurant, Sri Petaling many months ago to try their famous Gai Wo Bao, which translates to ‘Chicken Nest Bun’. I have tried Gai Wo Bao in the other dim sum restaurants nearby and found it to be so-so only. And since it is said that Clan Restaurant is the originator of this bun’s recipe, I had pretty high expectations. In fact, the main reason I went to Clan Restaurant was to try the Gai Wo Bao only. But woah, as delicious as the Gai Wo Bao looked it left me greatly disappointed. The starchy pork and onion filling was pretty much tasteless and the bun had a really bad texture. Sorry to say this but I really don’t understand what’s so special about stuffing Loh Mai Gai into a bun.
Either the quality has dropped drastically over the years, or the Gai Wo Bao here is just simply overrated. And I feel Pan Ki just 5 minutes away serves a better (although not great as well) Gai Wo Bao if you ask me. I already forgot how the dim sum was but generally it was ok, nothing to be shout about. Pricing seemed to be on par with the other dim sum restaurants nearby. Although the Gai Wo Bao and dim sum didn’t impress me at all, Clan Restaurant still enjoys good, brisk business daily. I do hope they have something else to bank on as their signature dish, because the Gai Wo Bao was really ng dim for me lah. 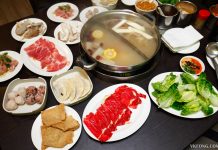