I have never really considered Sunway Pyramid a hot spot for good restaurants. But that perception of mine is about to change after the opening of Hana Dining + Sake bar. Seems like Sunway Pyramid’s management is taking the selection of their F&B tenants more seriously and shoppers have better food choices now.
It should also be made known that Hana is actually Taiwan based Aplus Dining Group’s first oversea branch. Aplus is reputed to have brought fusion dishes into Japanese food scene in Taiwan combining the best of Japanese with international flavours. 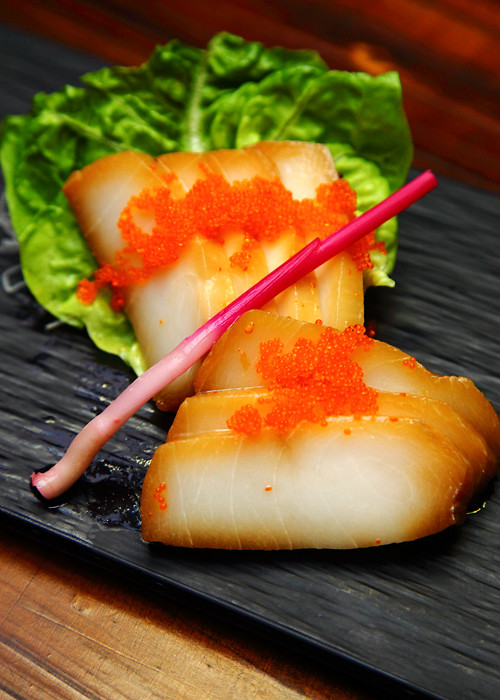 That said, not all the dishes you find in the menu are are Taiwan, as there are also many cleverly constructed dishes by the experienced Malaysian chef. It was a great pleasure to be invited over for a lunch session and chat with the owners and chef to learn more about their restaurant and a thing or two about sake.
The most memorable dish for me that day was the Olic Tuna @ RM25, which features slices of perfectly marinated shiro maguro in olive oil, garlic and secret herbs for a unique taste. Due to their high natural fat content, these tender tuna slices have a buttery texture that will almost melt in your mouth.
And despite what most people say about this dish being a tad salty, I thought the flavor was just nice. If you ask me, this is must try and you should not leave without ordering it. 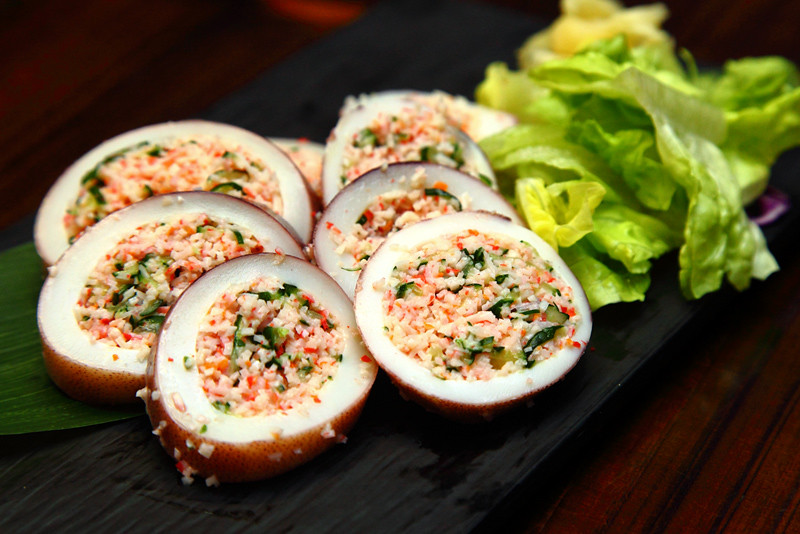 The Ikakyuri @ RM25 is a cold appetizer and it’s basically a squid stuffed with preserved cucumber. However, I am not too sure about the stuffing’s translation from its Chinese name because it did not really taste like anything preserved.
Anyway, I am actually glad that it did not taste like its description, as the stuffing was creamy with a refreshing blend of cucumber bits. For an appetizer, this was actually great and highly recommended. 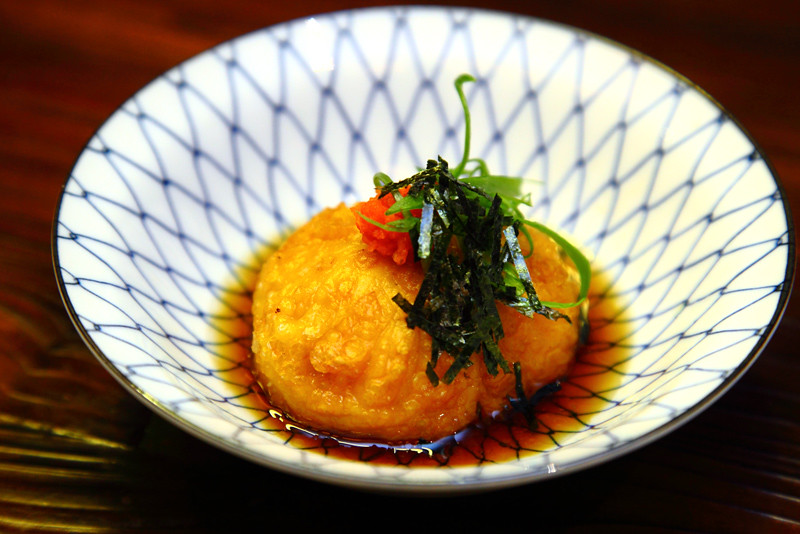 This looks like your everyday tofu but the Age Kabocha Tofu @ RM8 is also made with pumpkin, then stuffed with whole shrimps and ginkgo nuts. The resulting taste is dense and creamy with a sweet and nutty flavour which is quite different from a normal tofu. For me, that alone is enough reason you should try this. 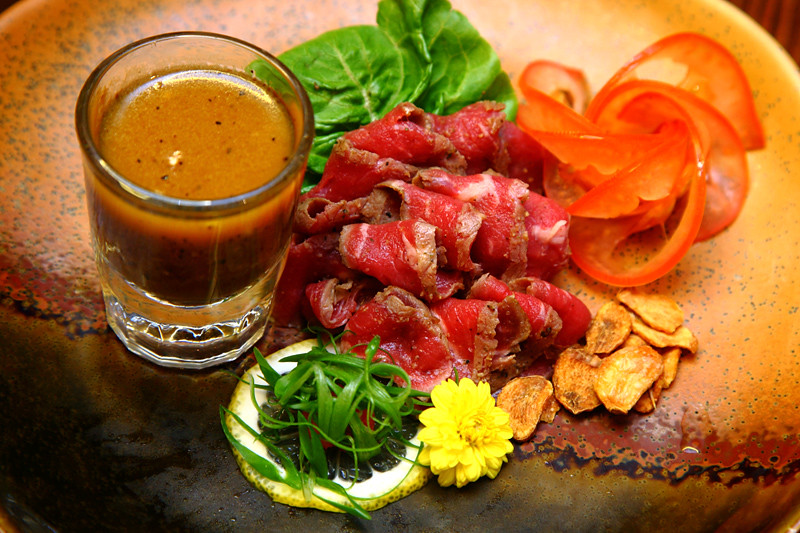 Beef Tataki is available in either Australian or Wagyu beef, priced at RM30 and RM88 respectively. We had the Australian beef version and while the lightly seared beef won’t necessarily blow you away, the zesty citrus sauce more than made up for it. 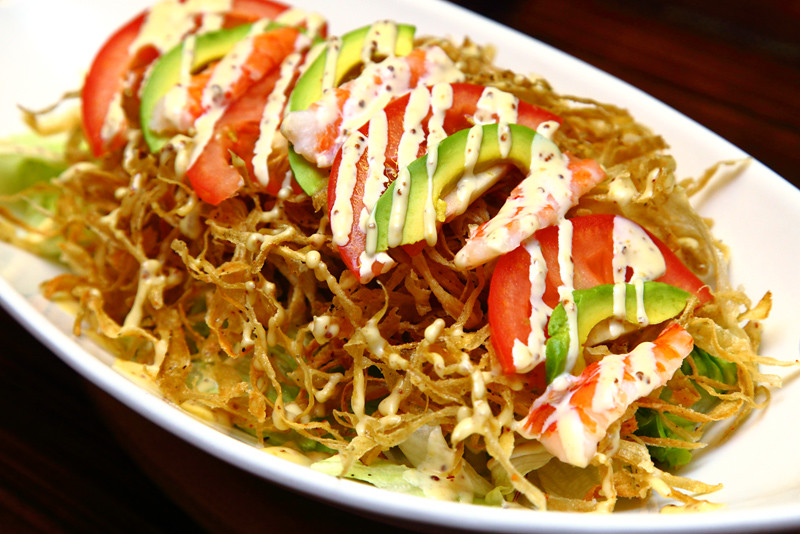 Next, a ridiculously delicious Fried Burdock Salad in Mustard Sauce. For RM20, the price is a steal for what you’re getting in a restaurant such as Hana. It’s so good that I could finish this entire bowl all by myself. Again, it’s the well crafted sauce that makes all the difference. 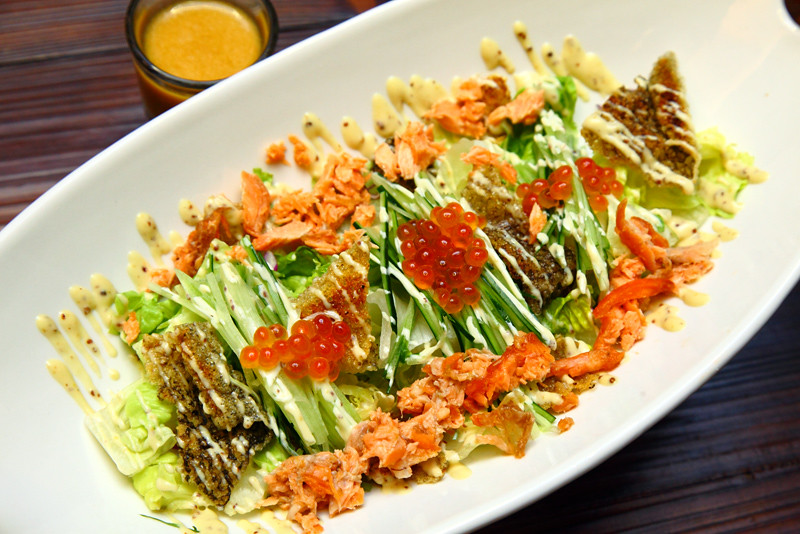 Another salad we had was the Crispy Salmon Skin Salad @ RM25. As you can see, Hana is pretty generous with the toppings and you also get salmon roe and flesh besides just the skin. Just like the burdock salad, this was great as well and there’s nothing to complain about. The portion size is also large enough to be shared easily with 2-3 friends. 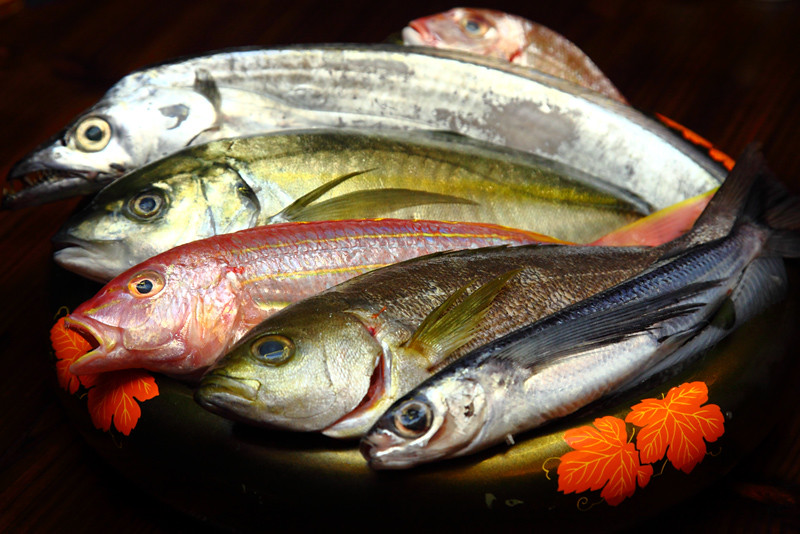 While we were enjoying the dishes, Group Head Chef Thomas Lim surprised us with a platter of fresh fishes from Japan and told us he’s going to prepare a unique dish for us. 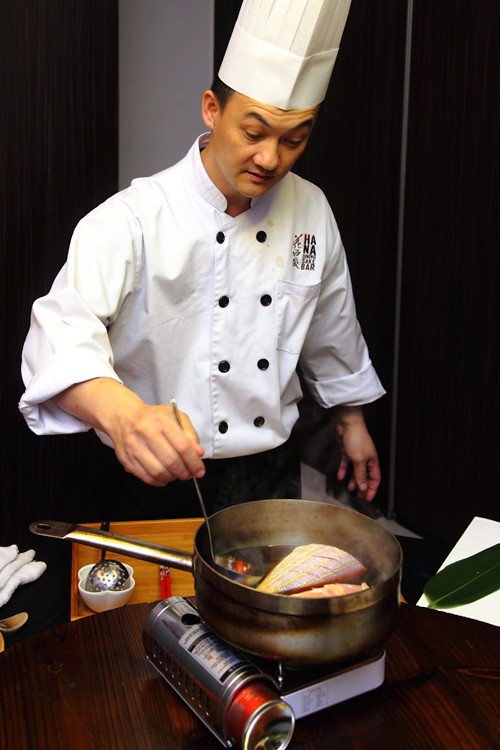 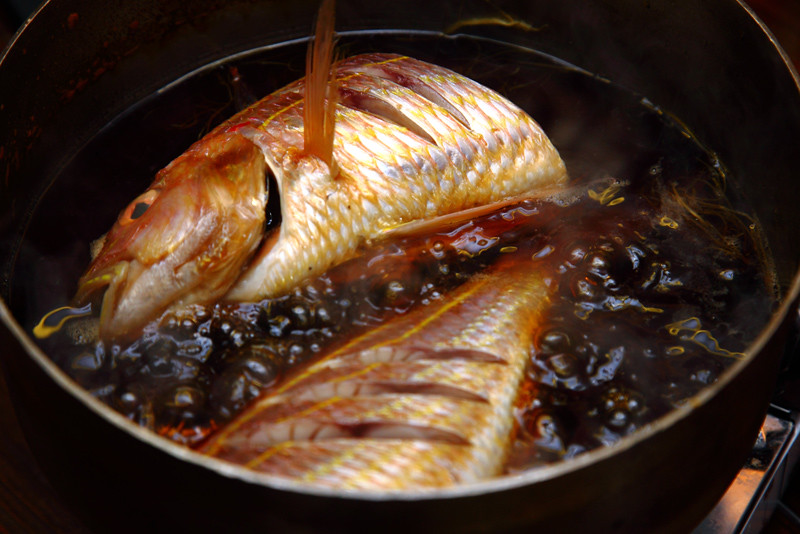 He then took a threadfin bream (Itoyori) and proceeded to poach it in a mixture of sake, water, mirin, soy sauce and ginger. This is in fact a traditional Japanese method of cooking fish known as Nitsuke. 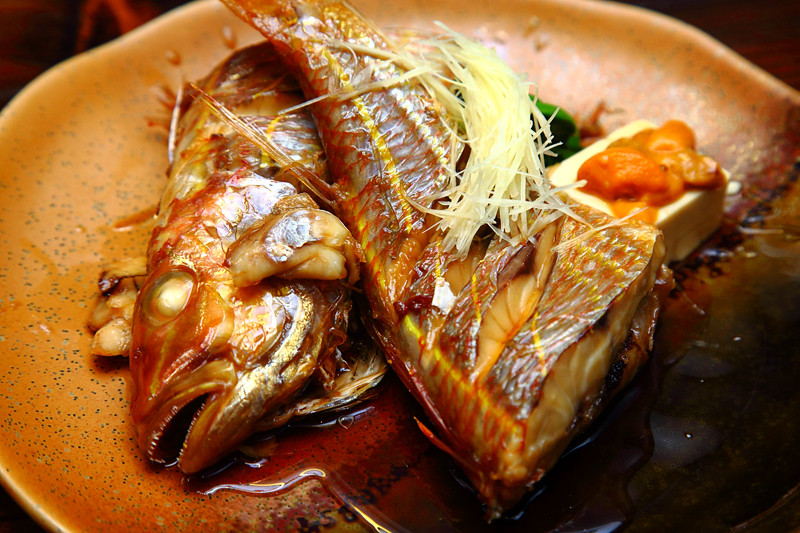 As simple as it might seem, Nitsuke is a beautiful way to enjoy a fresh fish. Since the cooking process is gentle and done in low heat, the fish remains in tact and you could easily separate the flesh from the bones in chunks. Taste wise it was excellent and quite similar to a steamed fish, except it’s more flavorful yet not salty. 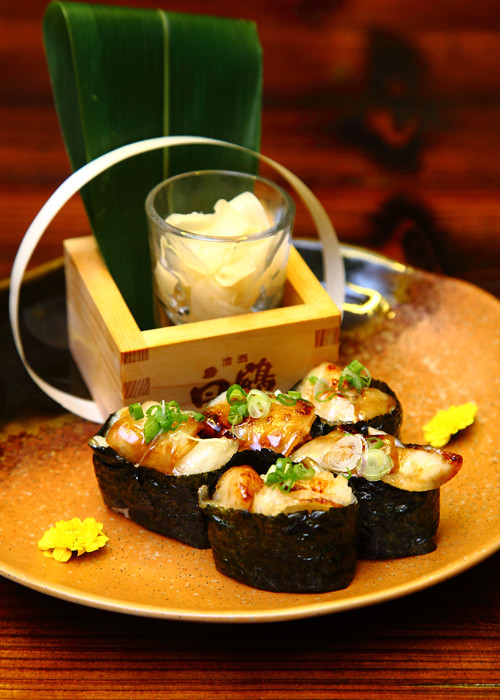 There’s no lack of sushi here and one of the more special ones is the Hirame no Engawa Nigiri @ RM10 each. Hirame is a kind of white flatfish, which you might know as flounder. The meat near to the fin section of the flounder is called Engawa and it’s usually served raw as sashimi or nigiri sushi in Japan. Due to its scarce availability, the price is justifiably higher than the rest. 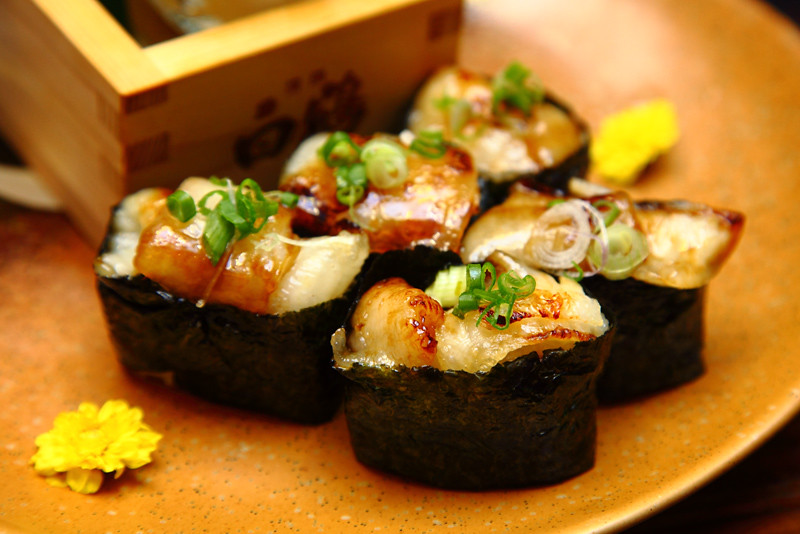 At Hana, they slightly sear the Engawa using a blowtorch for a lightly roasted flavour. They are best eaten as soon as they are served to savour the texture as intended: warm, slightly chewy and decadent center. For those who want to enjoy Engawa more cost effectively, then you should consider getting the Donburi version @ RM38. 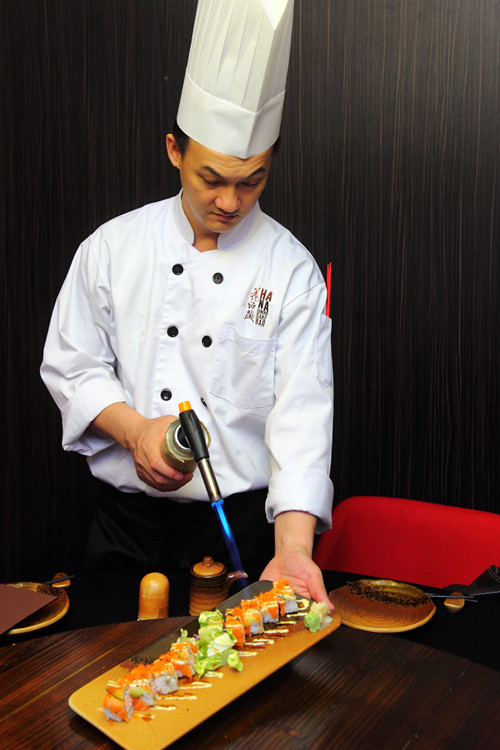 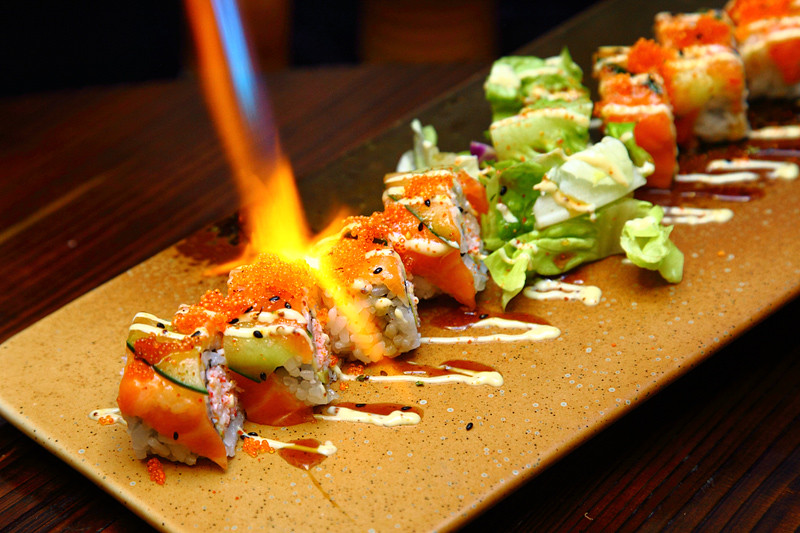 If you order the Salmon Roll on Fire @ RM28, it will be blow-torched in front of you and you will hear the sound of Tobiko popping. And of course the dish is more than just a show, as it was lip-smackingly good! 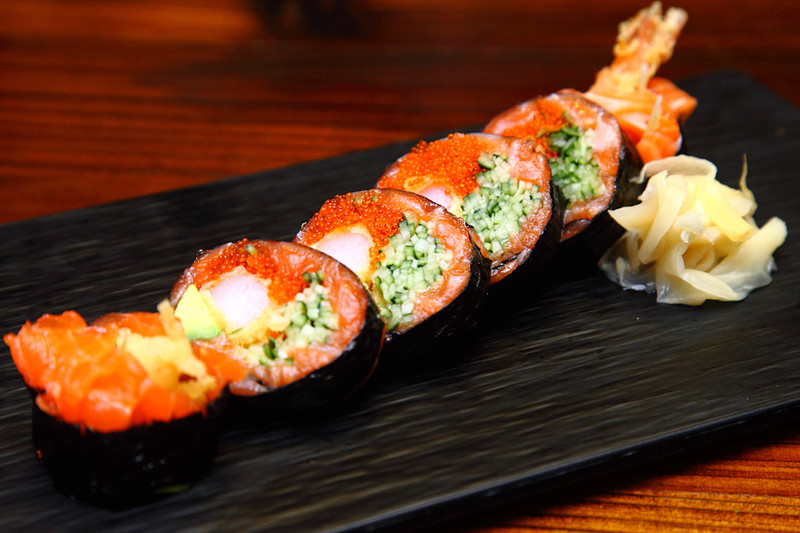 The Hawaiian Shake Harasumaki @ RM33 is a makimono with its rice replaced with salmon belly while retaining the other ingredients such as prawn tempura, flying fish roe, avocado and cucumber. Compared to a normal makimono that’s filled with rice, this luscious sushi roll has a richer and satisfying taste. 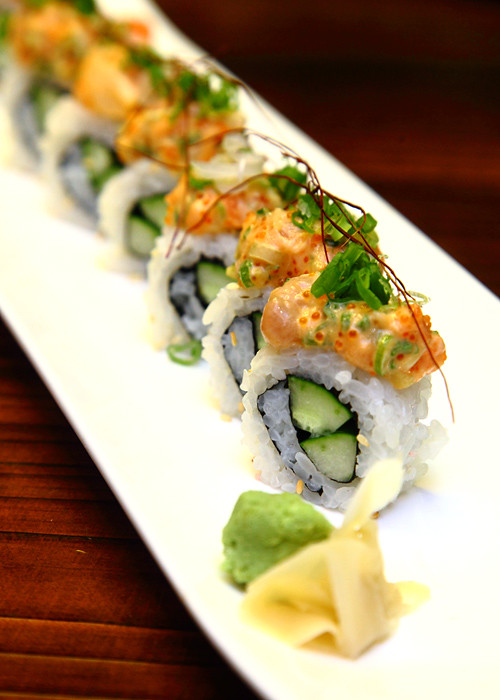 Hana spared no quarters in making their Spicy Tuna Roll @ RM20 and used Toro (fatty part of tuna) as the topping. Worth a try especially for those who are bored of the usual salmon, unagi or soft shell crab rolls. 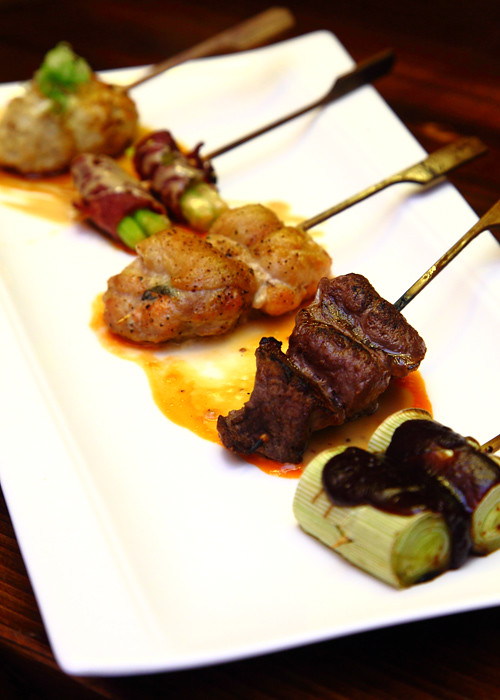 And since Hana is also a sake bar, how could they not have yakitori? Perfect for sharing, the Hana Kushi no Moriawase (Hana assorted Grilled Dish) @ RM33 comes with a handful of different skewers of meat and vegetables. While this might not be the best tasting grilled food in town, it’s nevertheless good enough not to be a disappointment. 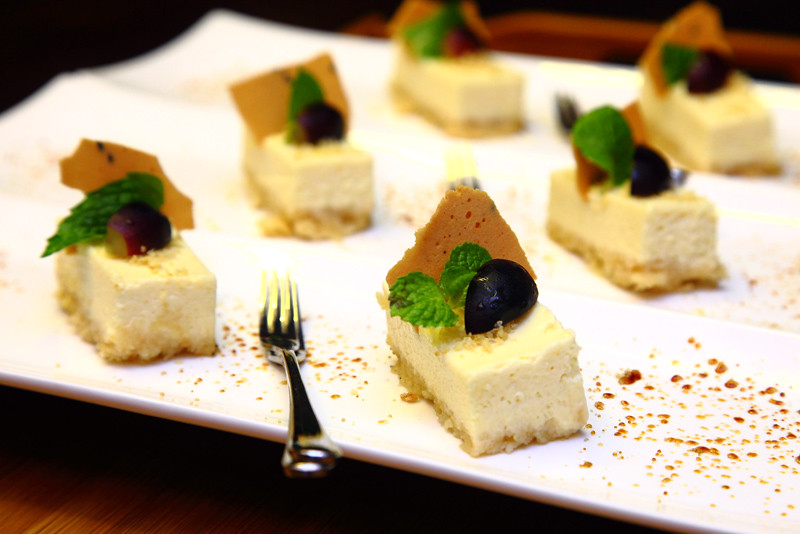 To end the meal, each of us had a slice of creamy Tofu Cheesecake @ RM8. But just so you know, the standard slice is not as small as what you see in the photo above because they were split into half for sharing. 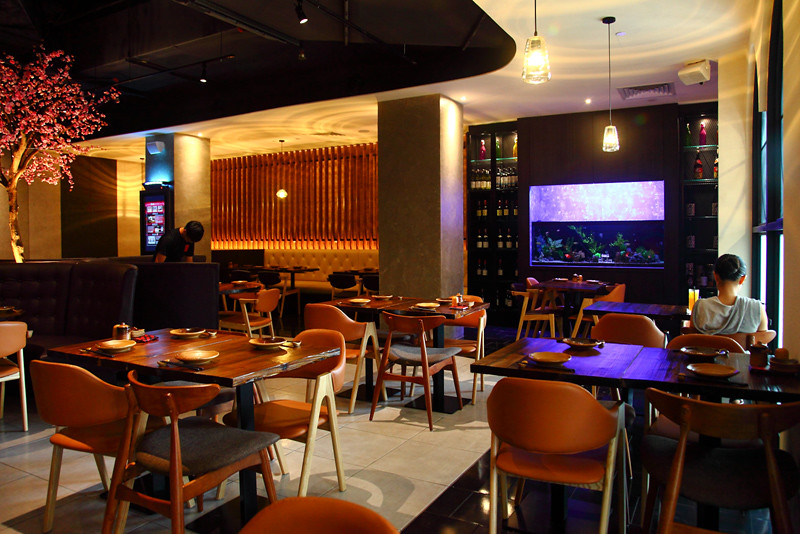 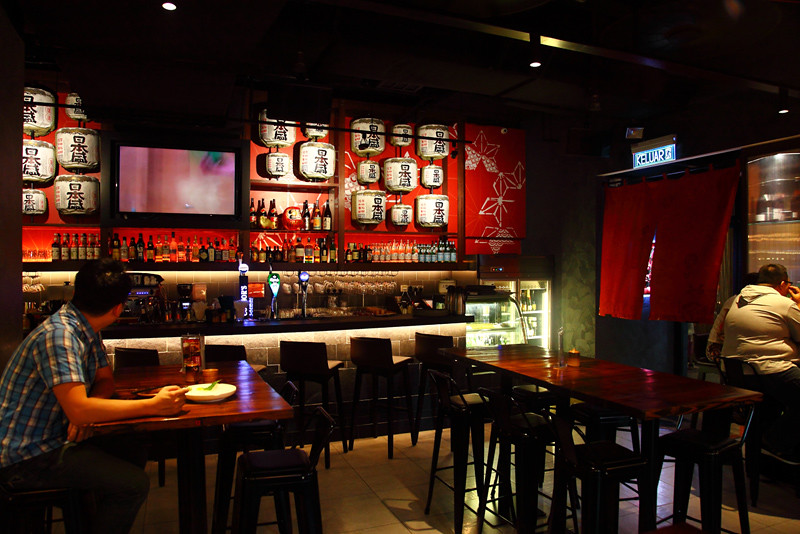 The restaurant is divided into two sections: the normal dining area and drinking area. The latter is for casual meals in an Izakaya-like environment but there’s no stopping you from ordering anything from the menu.
Sake wise there’s plenty of choices and I was told that they carry at least 50-60 different brands with prices ranging from affordable to high-end. Since I am not a drinker, I shall refrain from commenting further. With all things considered, you could enjoy a satisfying meal at Hana with a budget of RM50 per pax, that’s if without any serious drinking involved. 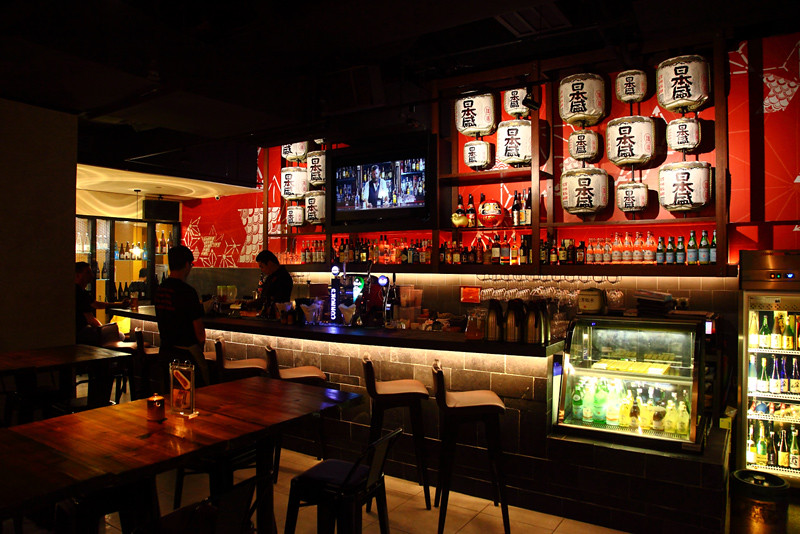 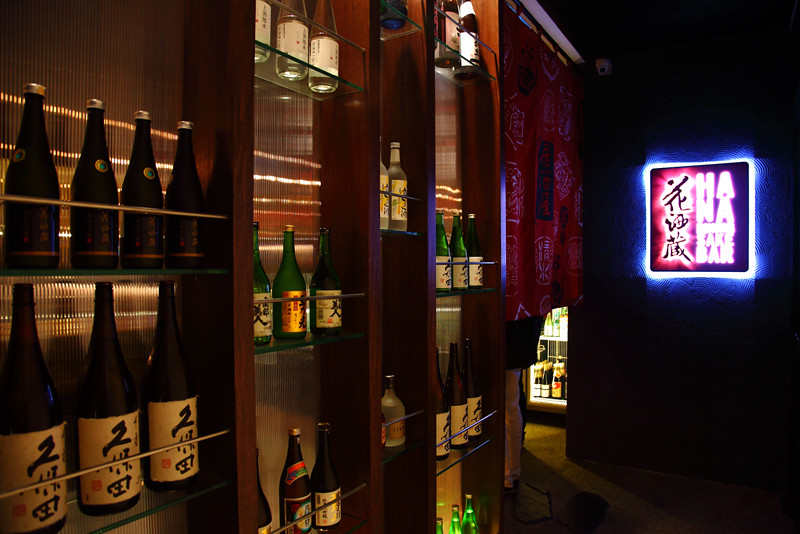 Overall, our lunch at Hana was a pleasant one considering nothing we had was bad and some dishes even surpassed my expectations by far. I know I may sound biased because this was essentially a free meal but the food is undoubtedly great. I guess the 18 years of experience garnered by Hana back in Taiwan really helped them to develop awesome recipes and sauces that work. 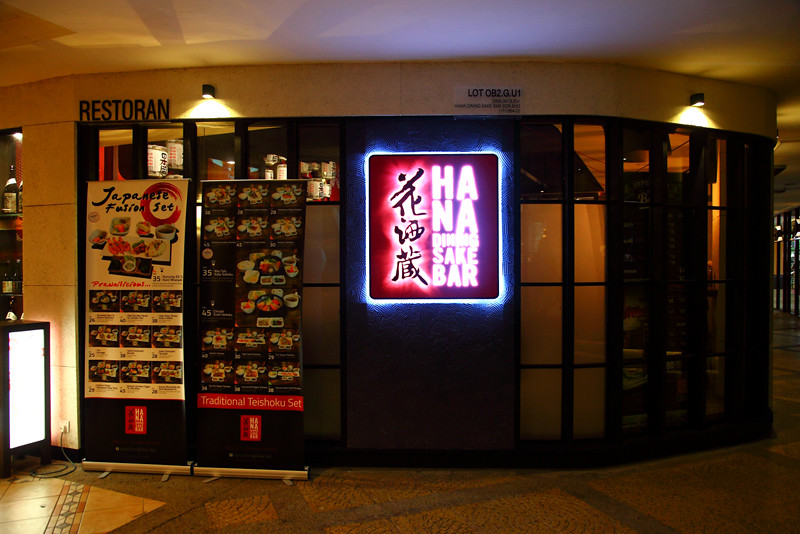