While I can be definite that Malaysia has better Prawn Noodle and it’s a draw for Chicken Rice, what about satay? Before I came to Singapore, a friend told me that Singaporeans weren’t impressed with our Satay – especially Sate Kajang.
After surveying around and tasted countless sticks of satay in Singapore, I have to agree with the Singaporeans and conclude that their satay is generally more delicious. And my vote for the nicest halal satay goes to Haron Satay at East Coast Lagoon Food Village. Until I can find a better one, I have set Haron Satay as the standard to beat for future satay comparison. If you are in Singapore looking for a relaxing spot next to a beach with plenty of food, then East Coast Park is a great choice. A huge food court is situated here and I estimate there’s about 50-60 stalls here mainly selling satay and seafood.
One of the things I like most about Singapore food is the affordability. Compared dollar-to-dollar, you will realize how cheap the food is for the locals. It costs $0.50 for a skewer regardless of the chosen meat may it be chicken, beef, mutton or babat (cow’s stomach).
But if you insist on converting then it’s about RM1.20 for every stick, which is quite pricey if you are having it in Malaysia. For tourists it’s hard not to convert, I understand. I used to do that for the first few weeks after I arrived in Singapore and everything seemed so expensive in RM! But now I am starting to get used with it. What makes Haron Satay really stand out is the marination of the satay meat. I just never tasted any juicier, tender satay that could be so flavorful even eaten on its own. Even after being dipped into the peanut sauce, the meat’s marinade dominates the taste through the burst of flavor upon chewing. Simply delicious.
And among chicken, beef and mutton satay, I would say the beef satay had the best marinade, which is the must try and surprisingly tender meat meat as well. I don’t know about you but beef satay had always given me an impression of being harder and more chewy than the rest. They do not skimp on the ingredients too, each skewer comes with thick chunks of meat. Also, I found that while some satay are good, you can get ‘jelak’ of them pretty soon maybe after the fifth skewer or so. But I didn’t have this feeling when I was having Haron’s Satay. Instead, I felt like having more! Because of the stiff competition among the many satay stalls, touts occur. So, if you are bothered about the touts, just observe from a distance first before walking to the chosen stall to avoid any discomfort. I have actually brought a few Malaysian friends to try Haron Satay and they all love it. And getting to ECP (East Coast Parkway) is really simple. There’s a bus operating from Bedok Interchange on every weekend that goes to ECP, which takes only about 20 minutes to reach. The bus number is 401 and do note that it only operates during the weekends, starting 2pm on Saturdays and 10am on Sundays. 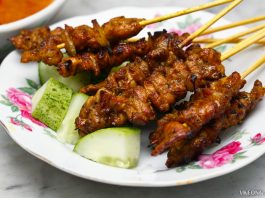