I could still vividly remember the last time I was at Kita No Zen (Hokkaido Ichiba) for lunch. The food was prepared with care and presented nicely, had generous portions and most importantly, tasted good. So even though the extensive menu is priced about 10-20% higher than the average Japanese restaurant in the mall, you get what you pay for – quality. Since SL had not been to the restaurant before and it was long since we had a good Japanese meal, we headed there last weekend. Feeling deja vu? That is because Kita is owned by the same company that operates Sushi/Pasta Zanmai hence the familiarity in the restaurant’s decor. I believe the Dragon Roll (RM30) is a popular dish at any Japanese restaurant. I felt it is so exceptionally good here that I ordered it during both of my visits. Topped with flying fish roe and sliced avocados that cleverly resemble the scales of a dragon, the sushi has a whole fried jumbo ebi wrapped inside. The prawn is very meaty too (thicker than my thumb!) and the flesh was firm and tasted sea-sweet. Simply delicious. The superbly fresh Salmon Sashimi (RM22, 7pcs) comes in thick, generous slices and had an amazingly silky smooth texture that melts in your mouth. They are probably as good as they could get. Unagi Kabayaki (small, RM28) – tender and flavorful in every bite, there was nothing to be faulted about this. We also had the Winter Roll @ RM22, which I feel is somewhat a sister version of the Dragon Roll. It consisted of shrimp, sweet Japanese omelette and cucumber. I have to admit both its presentation and flavor are inferior when compared to the Dragon Roll but still, it is a good sushi. Since the Salmon Sashimi was impressive, we decided to try the Toro Salmon (salmon belly) as well. It is understandably more expensive (RM30, 5pcs) for being more fatty and having an almost buttery taste. What can I say? Money well spent! Iced Green Tea Latte @ RM6 – very milky and not much of green tea flavor, worth a try nonetheless for me. We also tried some other food like Chawanmushi, Grilled Saba and Cheese Baked Oysters that were all equally tasty albeit not spectacularly memorable. I am not a huge fan of Ramen and Sukiyaki, which is why I almost never order them at Japanese restaurants. So even though I adore the unagi, sashimi and sushi here, I cannot vouch for the rest of the menu, alright? At the end of the meal we were very satisfied with the food we had. In fact both of us unanimously felt that the overall experience at Kita was way better than our last visit to Yuzu, which is another high-end Japanese restaurant located in the same mall. 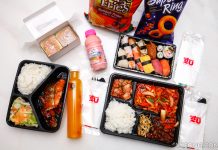 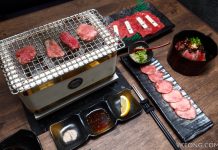