I remember the first time I heard about IHOP was when a friend went to Hawaii a few years ago. He was told to have breakfast at IHOP no matter what because of their legendary pancakes.
Even though Malaysia already has a few pancake restaurants, I was particularly interested in IHOP because this conversation stuck in my head. Now, I finally have the chance to experience IHOP after thinking about it for years. 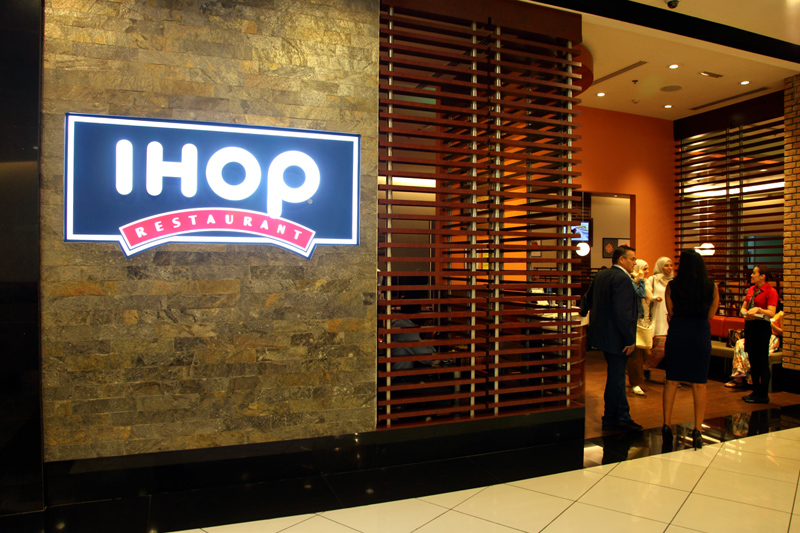 Looking through the menu I was pleased to find that there are something for everyone whether they’re a pancake fan or not. Pancake aside, the menu offers a wide range of other food such as omelettes, breakfasts, crepes, burgers, sandwiches (or melts), French toasts, main courses and etc. So expect lots of choices here, so many that it could be confusing for some considering there’s a lack of indication for recommended items. 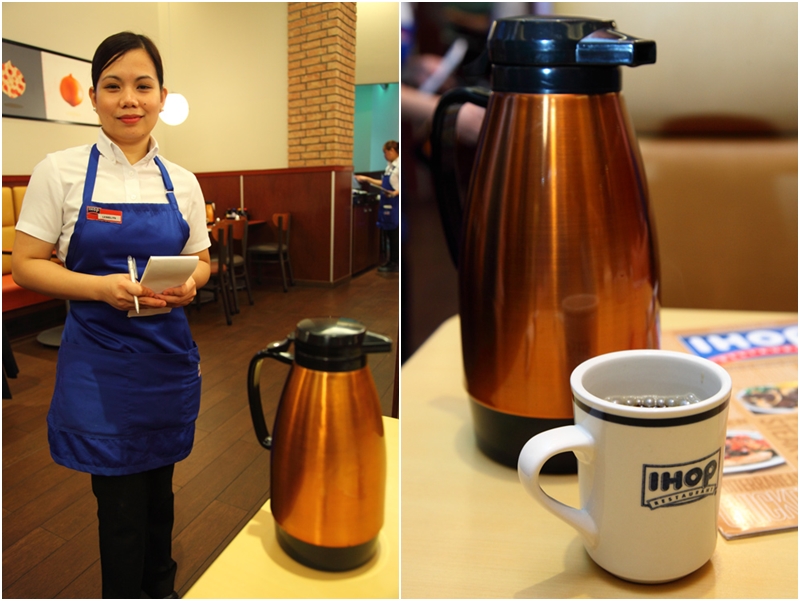 Service was extremely polite and our waitress introduced herself to us shortly after passing us the menu. Truth to be told, I was quite taken aback by this simply because it was so unexpected in a casual diner like this. However, it’s a nice surprise which I think Malaysians would definitely want to experience. 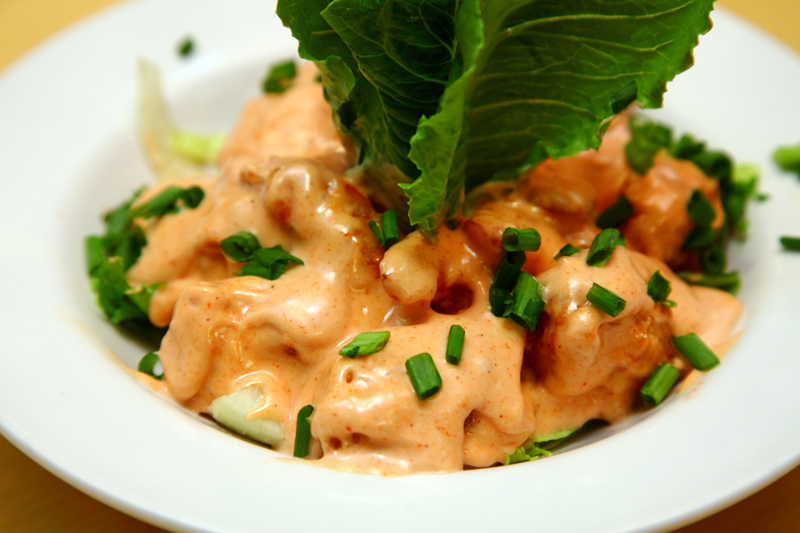 Oddly enough, we did not start with the pancakes but ordered the Volcano Shrimp @ Dhs 42 first because it caught our eyes immediately. The presentation of the dish feels a bit out of place with the lettuce sticking out at the center, which was quite different from what we saw on the menu.
Anyway, the shrimps tasted fresh and that was perhaps the only good thing about the dish. The main problem was there was too much sauce given rendering the batter friend shrimps soggy and sloppy. 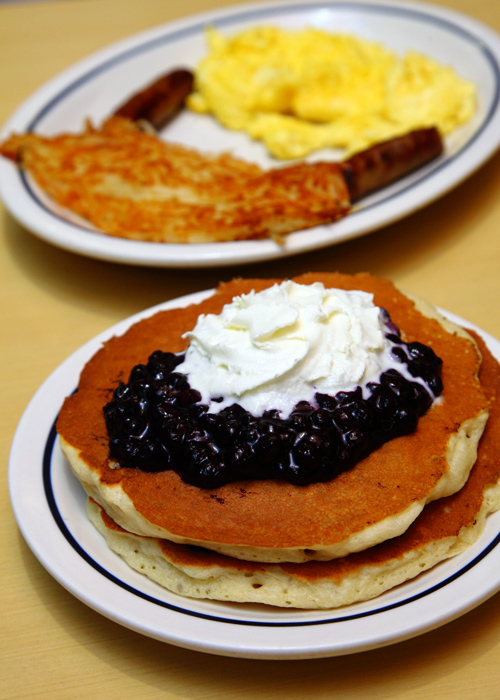 The Pick-A-Pancake Combo @ Dhs 41 lets you choose one of the pancake flavours which will be served along with two eggs, hash browns and a choice of bacon strips or veal sausages. 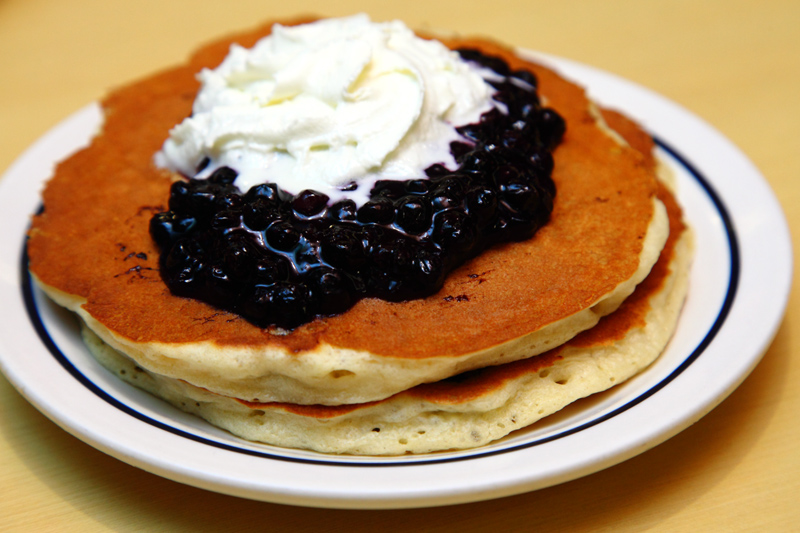 The buttermilk pancake itself was good and fluffy and topped with a generous serving of blueberry compote. Sweet but not cloyingly so, the pancakes are pretty good. But the same couldn’t be said for the accompaniments: the eggs were hard-scrambled (not to my liking) while the sausages were just too salty and over processed. 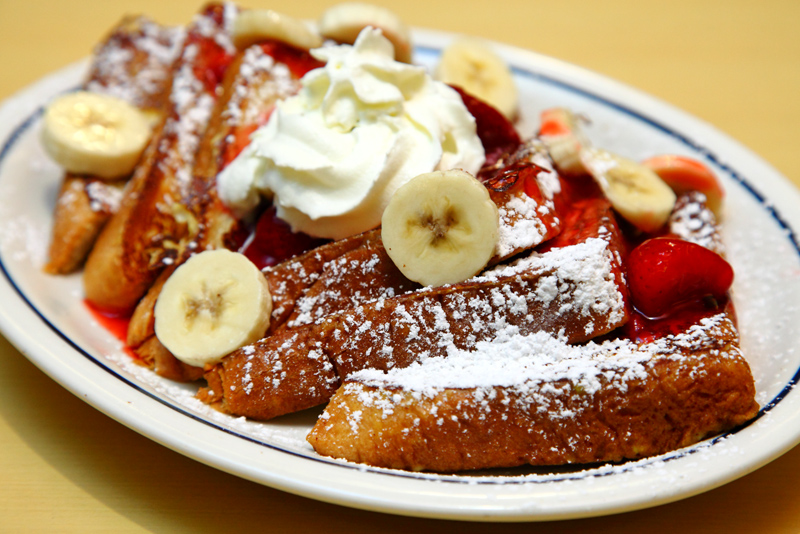 Maybe because I am not used to eating bread in thick slices, I found the Strawberry Banana French Toast @ Dhs 39 to be too thick and chewy to enjoy. Even cutting through the French toast felt like a chore. However, credits have to be given to the fresh strawberry topping, it’s simply yum. 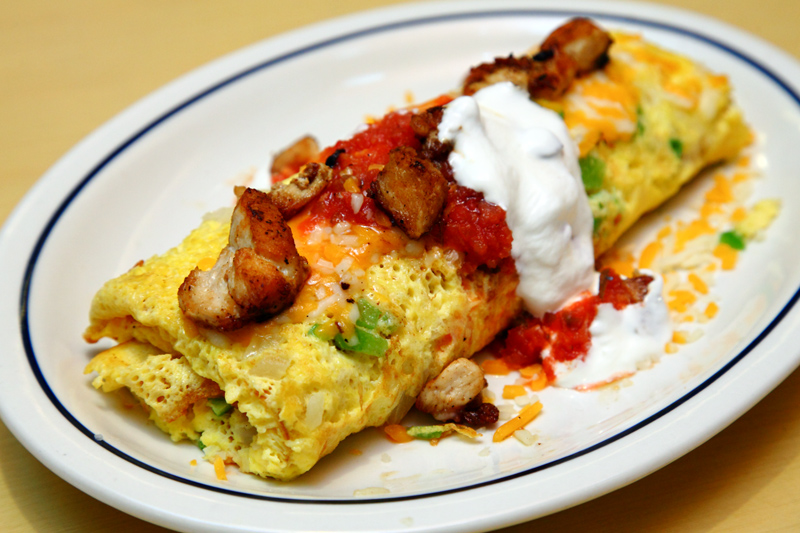 As much as I liked the overall flavour of the Chiken Fajita Omelette @ Dhs 40, I wouldn’t order this again if not for sharing. The portion is simply too big and there’s only so much egg you could eat at one go. The presentation could use some work as well, as it looks like a sloppy mess especially with the chicken pieces being strewn around. 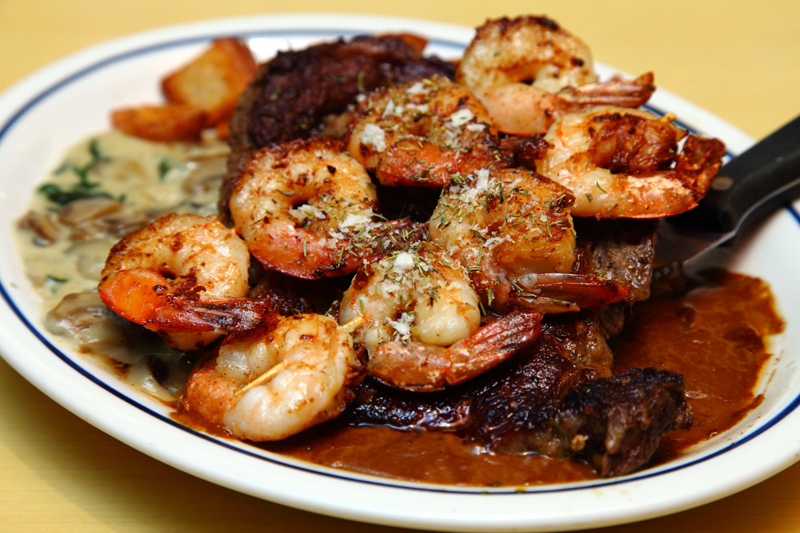 Compared to the rest of the items we had, the Surf and Turf @ Dhs 99 is worth the buck considering you get a big slab of ribeye steak and two skewers of huge grilled shrimps; though I should mention this is more suited for lunch or dinner.
The sides of potatoes and mushroom were great as well and we particularly enjoyed the delicious sauce they were served in, so much so that we dipped other meats into the sauce too. 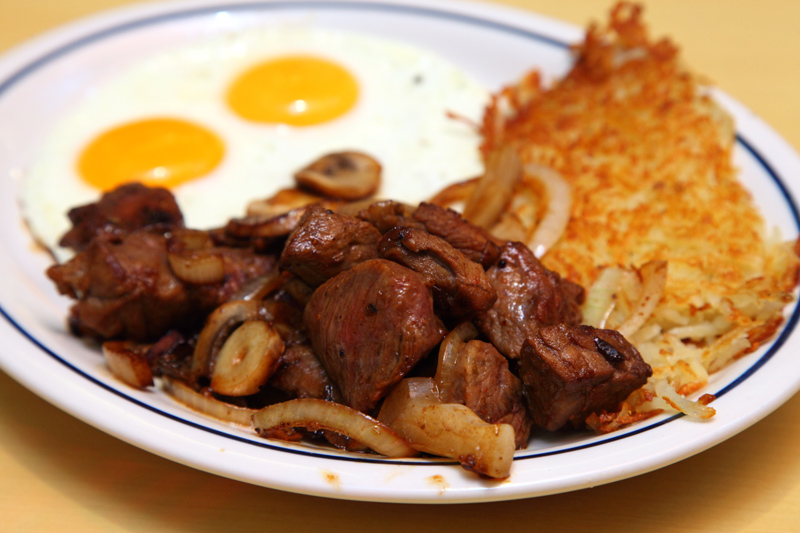 How often do you have steak for breakfast? Well at IHOP you could get a sirloin for breakfast by having the Sirloin Tips & Eggs @ Dhs 67. It was prepared within our specified doneness and had a pleasant sweet onion flavor to it instead of the usual salt and pepper. It was a refreshing try that is worth a repeat. 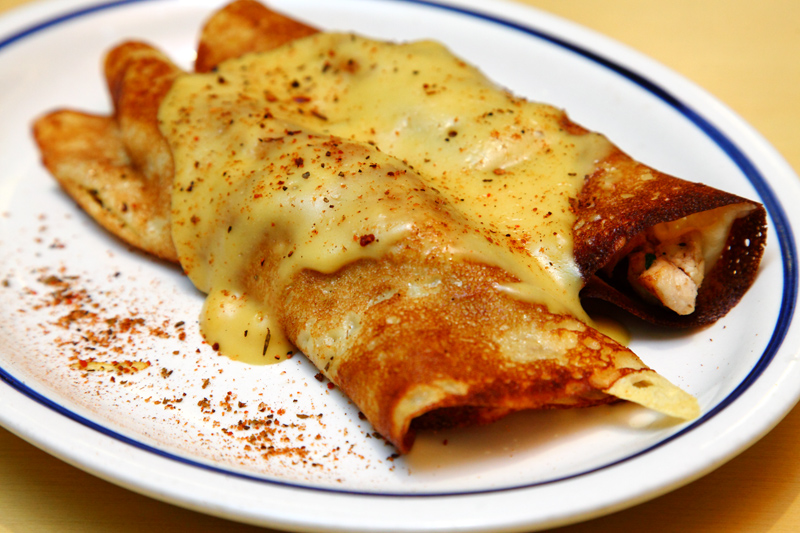 And here’s what we enjoyed the most throughout the meal – Chicken Florentine Crepes @ Dhs 48. Despite the not-so-appetizing look, everything else about it just felt right. The crepes were thin and crispy at the edges while the rich hollandaise sauce was a great complement to the roll which had sauteed chicken breast strips, spinach, mushroom and onions. 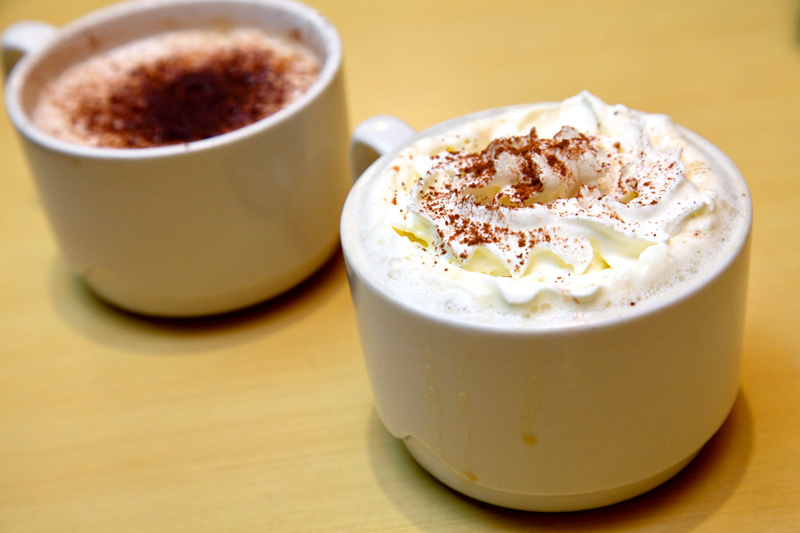 Coffee wise there are two that stood out from the rest: French Vanilla and Swiss Mocha, both priced at Dhs 19 each. They are undoubtedly good and worth trying if you are bored of the usual latte or cappuccino.
Another option is the Never Empty Coffee Pot @ Dhs 17/pax which basically means bottomless coffee. But I’d just pay the extra Dhs 2 to get their International House Roast because the coffee that comes in the pot tastes just like those served in a typical hotel breakfast. It might be good for a long conversation, though. 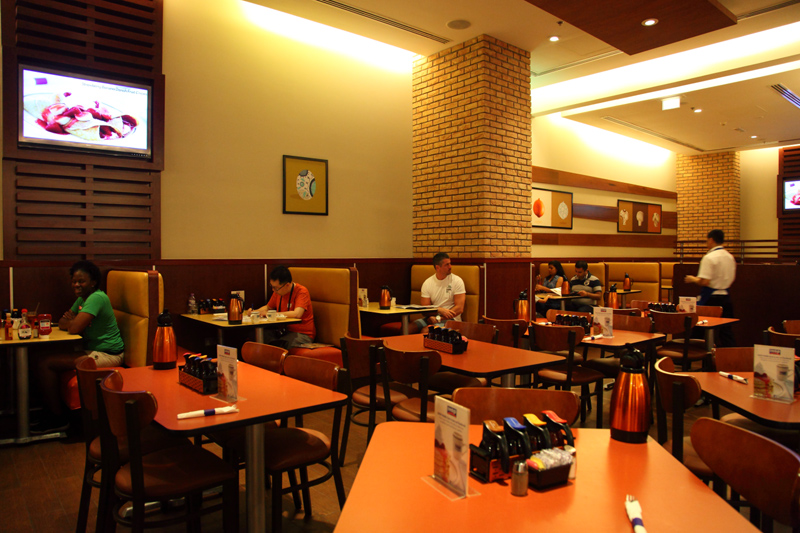 All in all, IHOP is a friendly and quick-service spot where you could get a grub in a warm and welcoming dining environment. The only complaint I have about the restaurant about its setting is that the booth seats are too tight and could be slightly uncomfortable to enjoy your meal but that’s an extremely easy thing to fix. If IHOP does set up a restaurant in KL, personally I think Bangsar would be a great starting point. 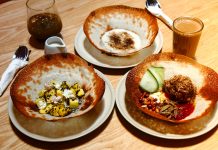