Although it has been more than 4 years, Ishin Japanese Dining still stands out vividly in my mind because of the awesome meal we had. So much so that I could still tell you exactly what were the dishes I had that day for lunch. I have always wanted to return with my wife to re-experience the place but somehow the plan never materialized – not until last weekend. 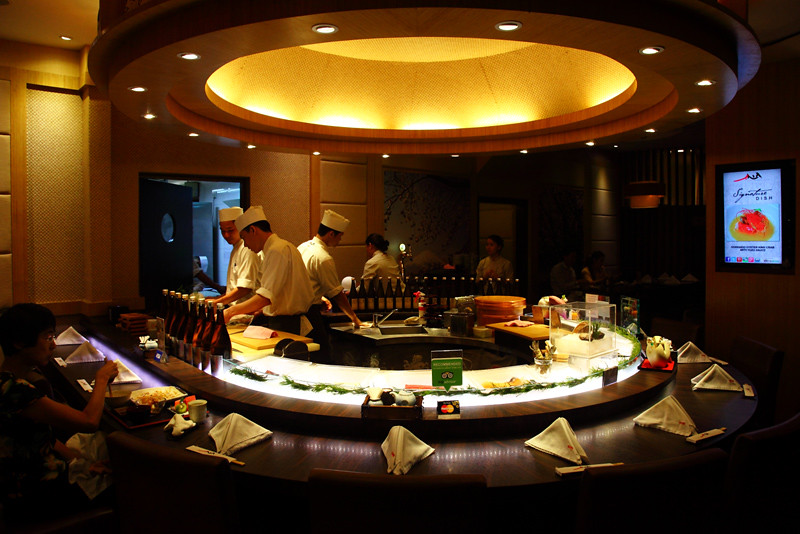 To keep up with the changing trends, Ishin has introduced a few fusion dishes but their menu is still faithful to traditional Japanese cuisine, which is what they know and do best. That means a number of dishes that might seem unusual (or even intimidating for some) because you won’t see them being offered at the normal Japanese restaurants. 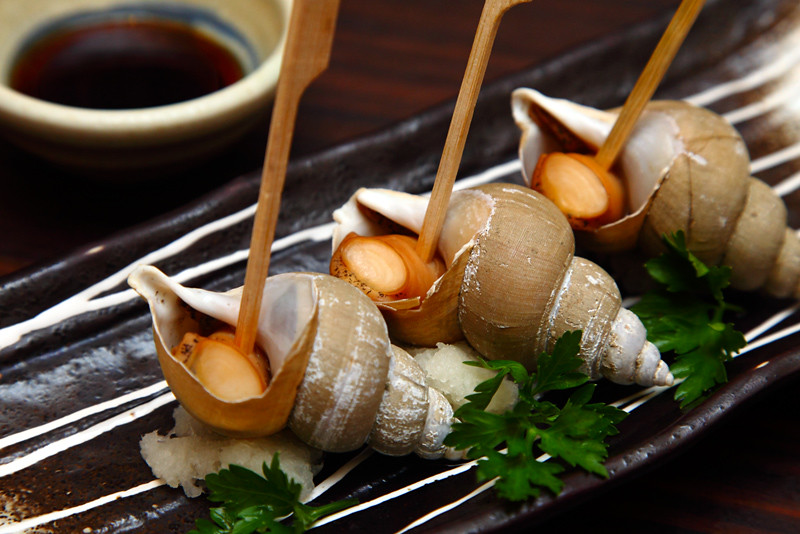 We started off with a trio of boiled Japanese Sea Snails (Shiro Baigai) @ RM35 that were still warm when served. They are conveniently skewered on a bamboo stick so all you need to do is carefully pull the flesh out of the shell. It had a firm, fleshy and chewy texture that’s similar to abalone – and tastes like one too! The tail bit of the snail was a bit slimy and gritty though. 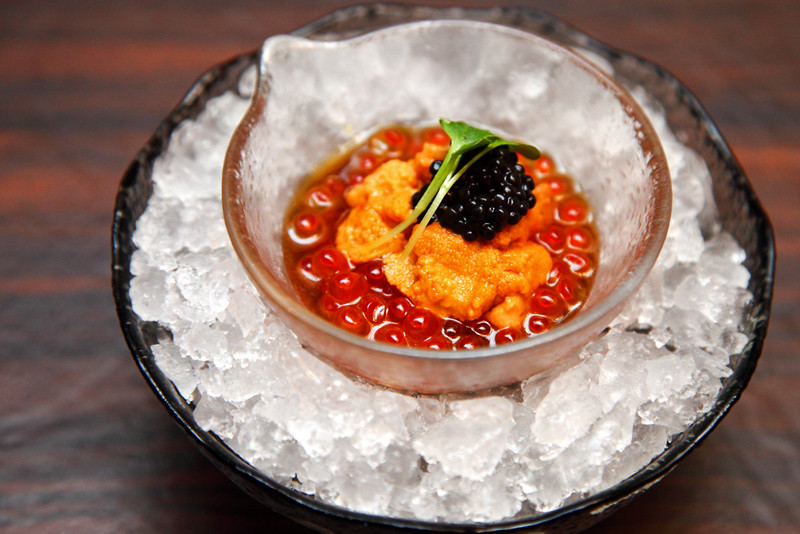 For a taste of luxury, the 3 Roe Tartar @ RM88 won’t disappoint with its slick combination of caviar, Ikura and sea urchin. Experience the fun of Ikura and caviar popping in your mouth contrasted by buttery sea urchin, then savour the umami flavours that will rock your palate. 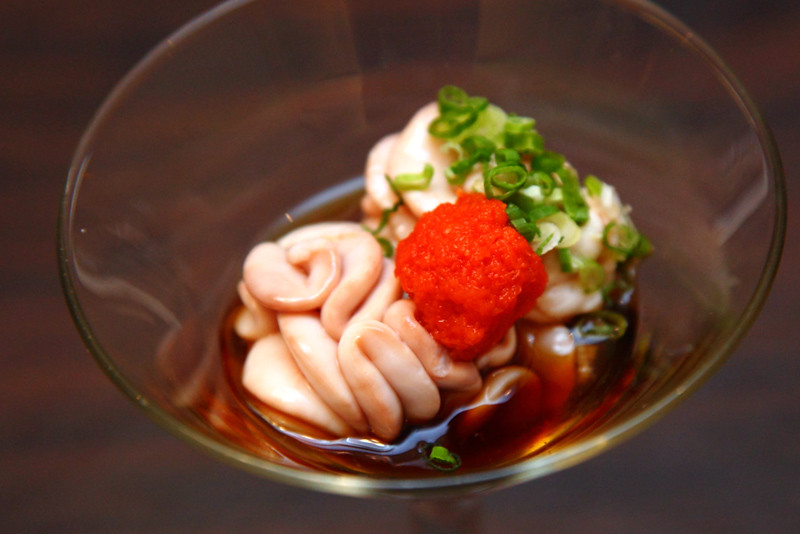 This could be one of the strangest things I have ever eaten – Shirako meaning ‘white children’, or simply cod sperm in English. As gross as it might sound, it’s a cherished delicacy in Japan and yes, I know they look like brain too.
But not to worry, it’s not served raw because it’s poached and served in a citrus ponzu sauce. If you are able to get past the mental block, you will definitely appreciate its unique creamy, melt in your mouth texture. 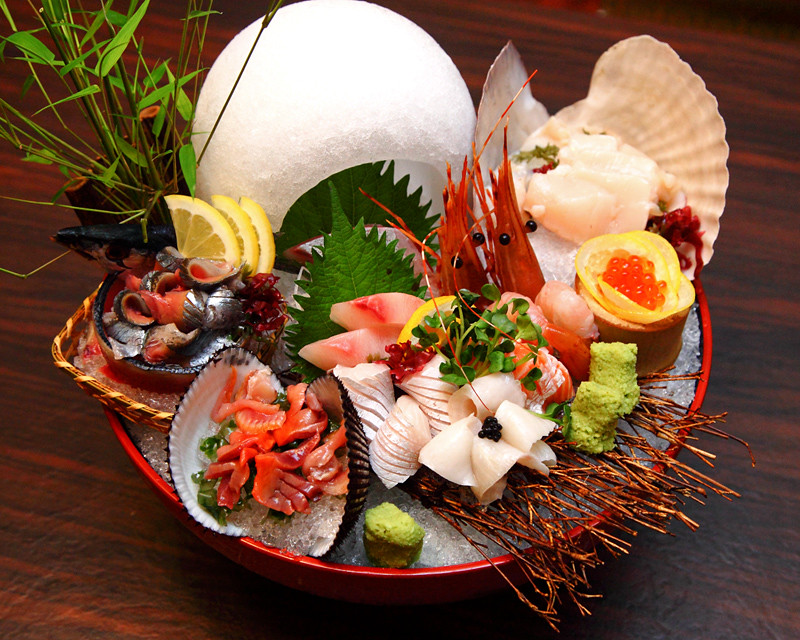 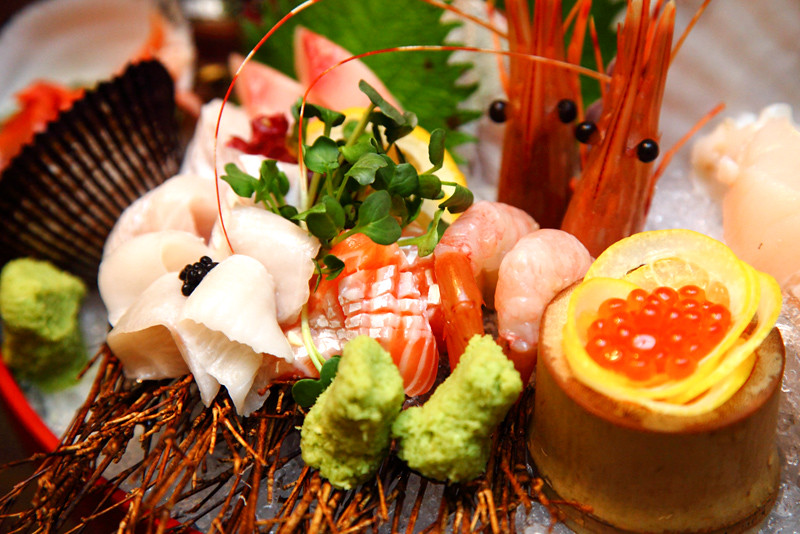 Next up, a special sashimi platter made differently every time based on the best fish of the day. The presentation itself was top notch and so was the quality of the sashimi. A special mention needs to be made for the Japanese cockles and scallop sashimi, as both were exceptionally fleshy and faintly sweet. 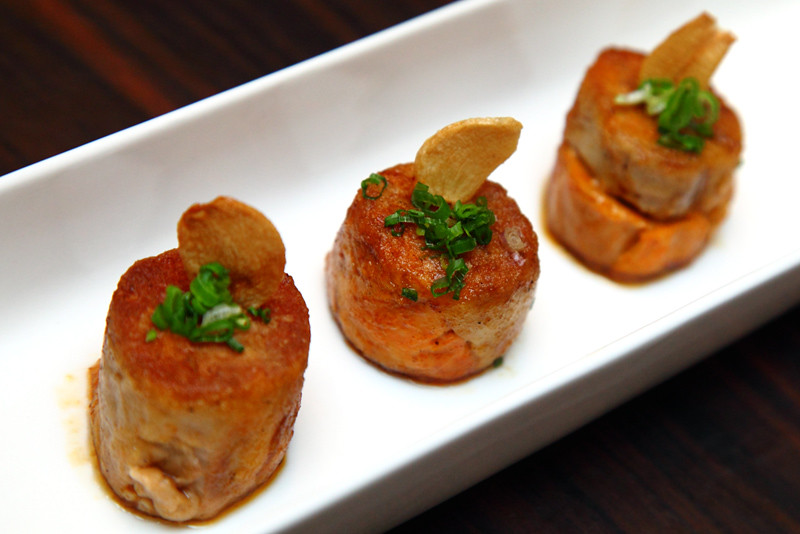 Monkfish liver (Ankimo) is also a great delicacy of Japanese cuisine and it’s available teppanyaki style here. Known as the foie gras of the sea, you could taste the silky and velvety taste under its rich and creamy texture. Who would have known that the liver of a fish so ugly could be so decadent? 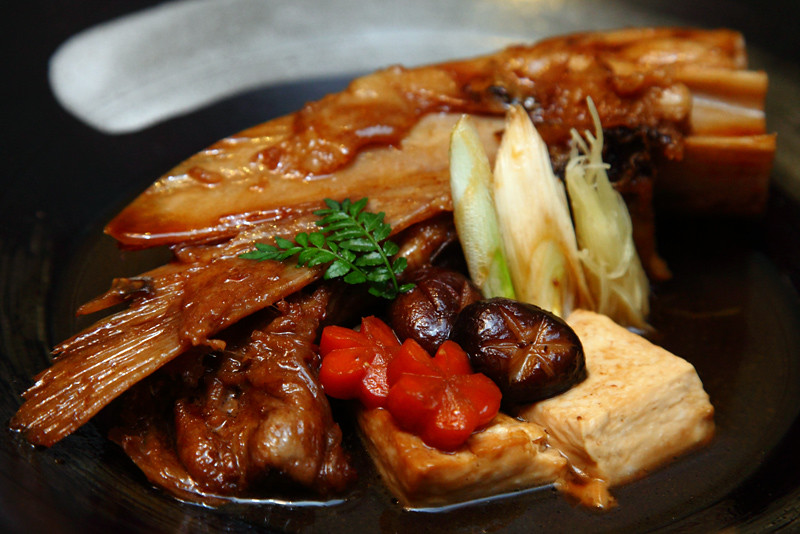 Ishin is one of the very few Japanese restaurants in town that offers tuna jaw and it could be prepared either braised or salt grilled. This was my first time having tuna jaw and I was pleasantly surprised that it had a lot of meat hidden under the bones. And as expected, it was tender with gelatinous bits and kind of chewy but in a good, enjoyable way. 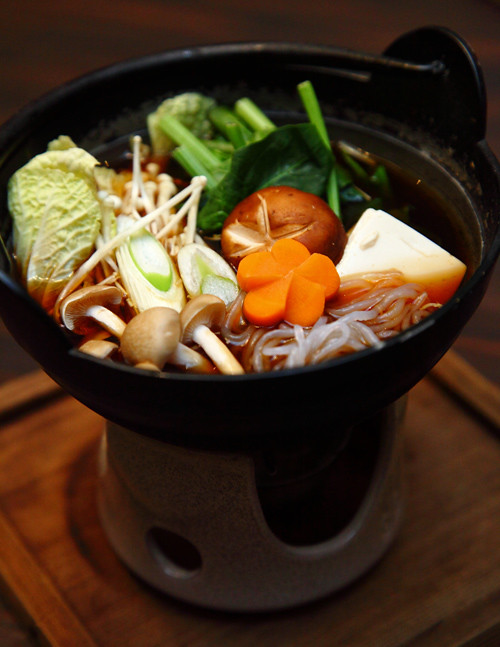 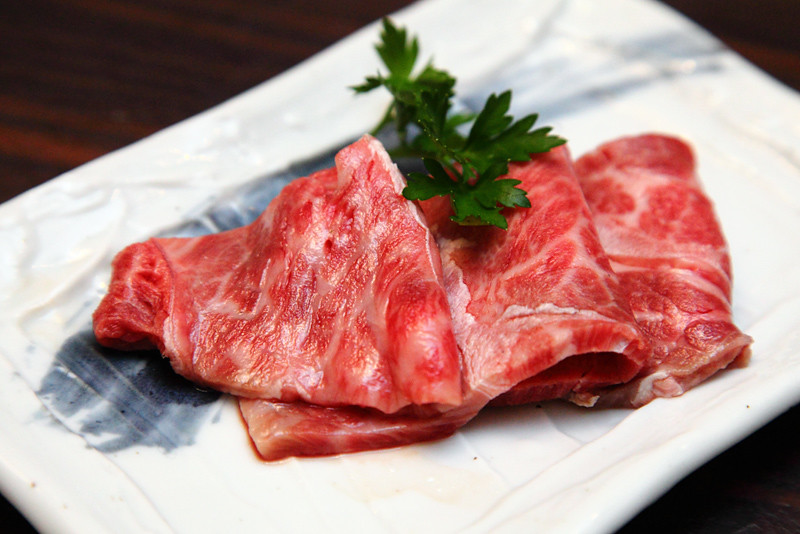 If you like Sukiyaki you won’t be disappointed with the Ishin’s Australian Beef Sukiyaki. The sukiyaki broth is flavorful with the right balance of seasoning and tastes even better after you simmer the slices of raw beef in it. The portion might seem small but personally, I feel it’s just nice to have with a bowl of rice. 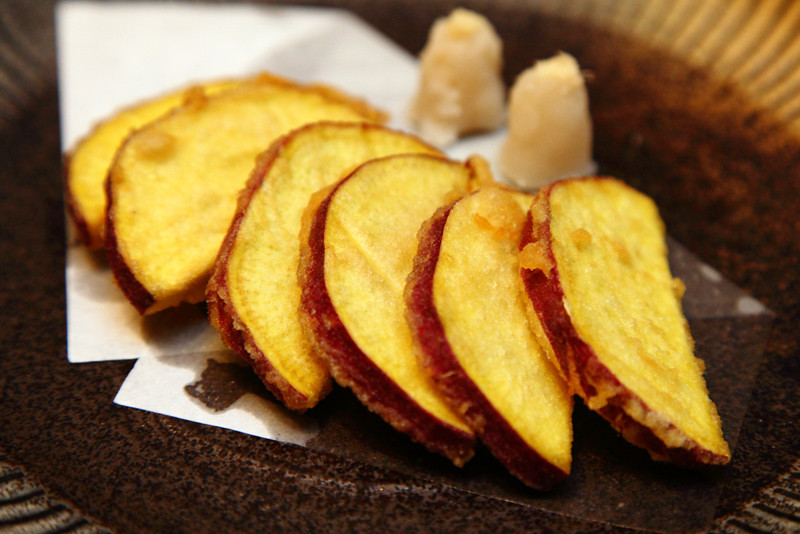 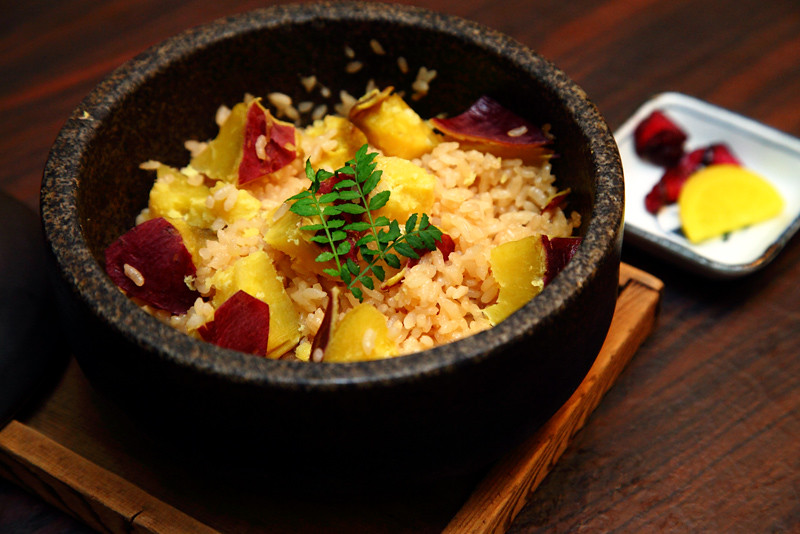 Japanese sweet potatoes are given a special treatment here and they are turned into two simple yet delicious dishes – tempura and rice casserole. While they share a similar taste profile with our local sweet potatoes, their texture is creamier without the fibrous stringy-ness. Just try it and you will know what I mean. 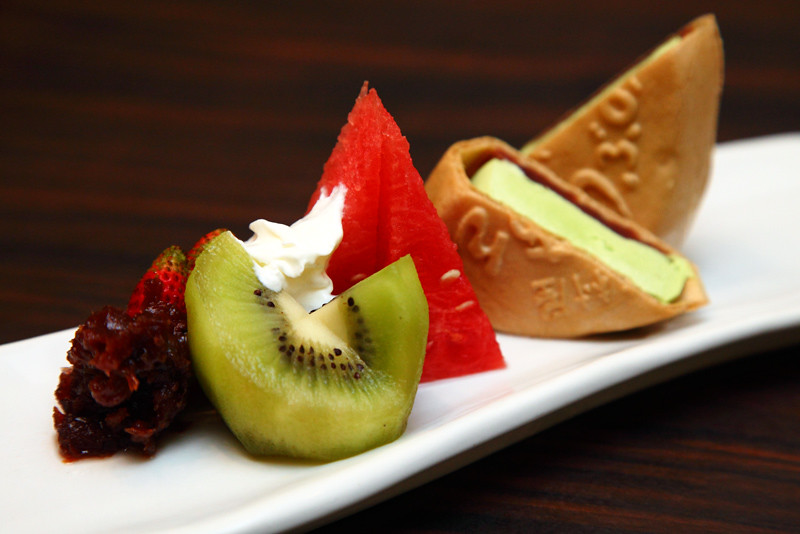 And for desserts, we had Monaka (green tea ice cream wafer) served with fresh cut fruits. The other option would be imported seasonal fruits from Japan such as Kyoho grapes, but you should know those will be a lot pricier than the Monaka. 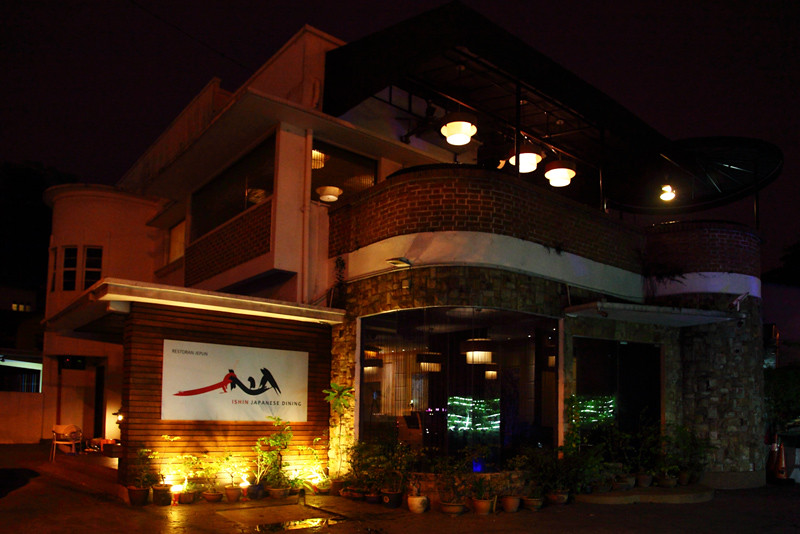 After comparing with the photo I took back in 2011, I notice that there is now an al fresco dining area outside the restaurant’s first floor. Other than that, Ishin pretty much looks and feels the same, and I hope to see them around for more years to ocme.