I have found a new favorite stall for ice kacang in Penang and it is Jalil Special Ice Kacang. Being halal is another good thing because everyone can enjoy it. The stall is just next to Mee Sotong Hameed Pata in the food court between the huge field and Fort Cornwalis at Esplanade. I ordered an ice kacang from the waiters but it didn’t arrive even after 15 minutes. I thought they had forgotten since there were a lot of customers during lunch hour. Even though I reminded the guy he didn’t seem to take notice and appeared to ignore me. There was not even a slight affirmation shown.
Seeing this I was about to give up and walk away after having my mee goreng there. And then the ice kacang came lol. So I think they were just too occupied remembering all the orders that they behave like this. Anyway my point is, don’t mind the service – your order will come eventually. Jalil Special Ice Kacang is priced at an affordable RM2.50 a bowl. Despite the cheap price the toppings are aplenty (sweet corn, red bean, atapchi) with a scoop of Nestle vanilla ice cream included. The shaved ice was surprisingly melt in your mouth smooth and soft, given that a traditional ice shaver was used. Not a single piece of coarse ice piece was detected.
Besides the ABC, the coconut vanilla shake here is equally popular for its refreshing taste. This is the reason I came here for lunch – Hameed ‘Pata’ Special Mee Goreng Sotong @ RM4. Still as tasty as ever, fiery hot with loads of cuttlefish strips. Still served on a steel plate, staying true to the Indian tradition. Flurry of action during the frying ‘performance’, it doesn’t stop until they close for the day. Overall, my take on Jalil Special Ice Kacang is that it is better than the one at New World Park, very recommended. Only if the service could be better but that can be avoided if you come during non-peak hours. 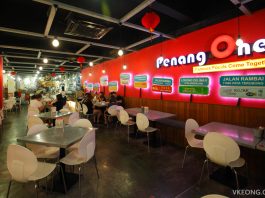