Went back to Kei Tak Sek (K.T.Z Food – Restaurant The Fruitti Stall) at Kepong a while ago to savour their famed lohs. Lohs, lol. I had the Mango Loh, which is shaved ice surrounded with fresh mango chunks topped with mango puree and sago. Taste wise I think it had deteriorated a bit compared to last time. I suspect it had something to do with all the hiring of foreign workers to make the desserts. You may get sweet mango if you’re lucky. I wasn’t, so mine tasted a bit sour.
By the way, try not to look at the process of making the dessert. The sight of a foreign worker cupping the shaved ice with his bare hands (don’t know clean or not also, and not wearing any gloves too) does not augur well to your eating experience later, lol. SL had the Honeydew Loh, one of her favorites. Since honeydew’s taste is generally sweet for all its fruit, it was much nicer. The arrangement for the dessert is similar to the Mango Loh, just that green honeydew balls are used instead with an additional cherry on top. I also had the Shanghai Noodle with Prawn Dumplings, which was supplied by One Noodle – a noodle shop nearby owned by the same person who owns KTZ. Nothing spectacular except for the juicy and flavorful prawn dumplings. Then, we also ordered some skewered siu mai for side dish. Funny how it was served with sweet sauce instead of chili sauce but I preferred to eat it plain. SL was not feeling too well so she had the century-egg porridge. It was normal stuff but good thing was it had the thick, gluey consistency.
If the standards have dropped even at the original outlet here in Kepong, I wonder if the other branches are doing. Hmm. Still, their peanut butter tong sui is a must try if you haven’t had it before. Very recommended. 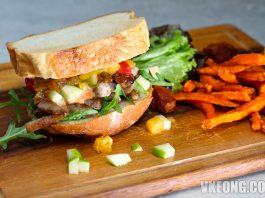 TTDI December 5, 2017
ABOUT US
VKEONG.COM - Malaysia Food and Travel blog with reviews of restaurants, hawker and street food in KL, Penang, Melaka and beyond.
Contact us: vkeong@yahoo.com
FOLLOW US
© VKEONG.COM - All Rights Reserved