It was a nice coincidence that the budget hotel I booked at Kuantan is conveniently located just across Hai Peng Kopitiam. But luck seemed to avoid me. Not only our planned trip to Sungai Lembing to check out the magnificient “sea cloud” was marred by a flash flood, Hai Peng was also closed for that particular two days we spent at Kuantan. Disappointed, I searched the GPS for any Kopitiam nearby just for a quick coffee break. Then we found Kemaman Kopitiam, which seemed familiarly well known so off we went. They just had a facelift recently. After comparing the before (photos I found online) and after (when I was there) I could say the old, nostalgic ambiance is gone. Now, it feels like just like another Old Town along with the thousands of other kopitiams we have in Malaysia. Hot coffee. I like how they purposely left a touch of coffee powder undissolved, still floating on your cuppa. It had a strong and thick taste, ada oomph. Now this is something new to me. Instead of serving them in cups, Kemaman Kopitiam actually seals the coffee in a plastic container (not so environmentally friendly, I know) so you could easily take it out later if you want. The Nasi Lemak Special with Lemongrass Chicken was great, it comes with a whole boneless chicken thigh that had been nicely marinated and some spicy sambal. The type that I have always preferred. Even though the chicken looked rather dry from outside but it was surprisingly juicy when we cut open the flesh. This is definitely one of the better nasi lemak I had so far for kopitiam standards. If I remembered correctly it was priced around RM13-15, not cheap but certainly worth trying. Instead of normal or those cholesterol free and omega rich eggs, you could get free-range chicken (kampung chicken) eggs here at Kemaman Kopitiam. The yolks are visibly broader with more orange color. I like my coffee ‘kao kao’ so I was tempted to buy their coffee powder, sold in the kopitiam itself. But I felt it was kinda pricey. Maybe next time, when I get to the original branch of Kemaman Kopitiam in Terrengganu. Anyway, although I feel the food and drinks here are better than the average kopitiam, hygiene practice by the waiting staff is much to be desired. I don’t want to comment too much on that but I feel you should be informed. If you see anything unfit, be sure to voice out. 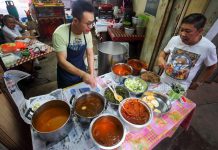