When I am only alone, I tend to eat fast food
Friend A was busy working late
Friend B was playing badminton
Friend C had already eaten
So, it was me all alone again
My choice was either KFC or McDonalds
Between KFC Zinger Tower and Prosperity Burger
I don’t like the overwhelming black pepper sauce of Prosperity Burger
So, I had a Zinger Tower from the X-meal
Didn’t really care about the negative reviews I saw on forums
Because I was curious What is Zinger Tower?
It’s a Zinger burger, with extra things and some modifications
Mayonaise was substituted zesty lime chili sauce
Some people said it tasted like dish wash
But I thought it was OK
A hash brown was added under the Zinger fillet
It was pretty soggy and bland
But it did make me feel fuller
Oh yeah, I don’t like Pepsi Max
So I requested normal Pepsi
X-meal cost RM10.50, ok lah
Zinger Tower ala carte cost RM6.60, omg My overall verdict?
GIVE ME BACK MY ORIGINAL ALREADY AWESOME ZINGER
I have a feeling KFC introduced this to fight with McD’s Prosperity
I think it won’t be effective
Instead, it would only drive the Zinger lovers away
Cham loh, it will be on the menu for quite long
How ar? Sien 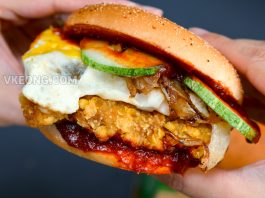 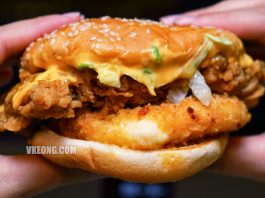 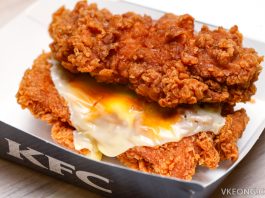 Burger July 14, 2017
ABOUT US
VKEONG.COM - Malaysia Food and Travel blog with reviews of restaurants, hawker and street food in KL, Penang, Melaka and beyond.
Contact us: vkeong@yahoo.com
FOLLOW US
© VKEONG.COM - All Rights Reserved