I actually wanted to blog about this Kin Kin Chili Pan Mee later but I am still so damn pissed off with the shop. I had the worst experience dining experience ever here – got our orders forgotten TWICE, waited for one hour and even got scolded by the boss for the slightest thing! No matter how tasty or famous their Chili Pan Mee is, I have vowed to boycott this shop forever. If you feel the Sisters Char Koay Teow and Lorong Selamat Char Koay Teow have bad attitudes, man you haven’t seen anything yet.
In KL I believe if Chili Pan Mee is mentioned, Kin Kin is the first shop to come into mind. Besides being famous for their Pan Mee (which I think is overrated anyway) they are also notorious for showing bad attitudes to customers. I have heard some incidents from my close friends where they were scolded by the owners but I have kept an open mind so far. At least until the last weekend. The Pan Mee we waited for more an hour. Those customers who came in much later than us were served earlier, seriously WTF. They didn’t seem to notice the four of us had been sitting there for so long too. And any reminder to them about our orders would be brushed off nonchalantly. It’s like “do you think I care?” was written on their foreheads.
OK to be fair I am not expecting 5 star hotel service from a noodle stall, heck I didn’t even expect them to be nice and all. But hey, at least show us some respect like a normal human being does! Chili Flakes. What’s this? Flakes made of chili to be mixed into your pan mee loh. Taste? Spicy and damn salty. I can’t imagine how some people manage to put 5-6 spoonfuls of this into their pan mee.. Although I am still very angry over the incident, I am going to give an honest opinion about their pan mee.. which in my honest, non-biased, frank, genuine, sincere, truthful opinion.. NORMAL only.

Ingredients wise there were self made pan mee, some fried anchovies, minced meat, lard and a sunny side-up egg. First timers were advised by some hand writings on the shop’s wall to only put half a spoon to one spoonful of chili flakes, then slowly increase the amount as desired. For me, I taruh-ed two spoonfuls. Here’s how it looked like after the noodle was mixed with the chili flakes. Looks fiery and spicy enough for you? The pan mee didn’t have much taste so the only thing one can do is to put a lot of chili flakes to enhance the flavor. That would probably explain the spoonful after spoonful of chili flakes people mix into their pan mee. Heh. So, you ready to hear my story? Here goes. We entered the shop around 1pm and found a table at the center not too far behind the restaurant. Refer diagram below. I am the orange dude, red dots represent the other customers and the arrows represent the traffic in the restaurant.
Needless to say, when you are sitting at such a position, people are bound to touch you either with their hands or their butts. So we were already very patient with all the waiting and forgotten orders, and I was already a little upset at that time. You’d feel the same too if you were in my shoes. Then suddenly the lady boss came over to our table and demanded me to sit on the other side of the table, because she said I was blocking the people moving around. WTF? I was not the only person who was seated like that, there were other customers blocking the way too. Even if I moved to the other side of the table, it was going to be the same lah.. still blocking people what.

She: Eh, you come sit over here lah.

Me (frustrated with all the waiting): No need lah, I am fine here.

She: Can you sit over here?! You are blocking people lah. It’s not I don’t want to let you sit there, later they knock you when they deliver the noodles you know.

Me: Nevermind, I will just sit in a bit.

She (shouts): Haiyo, then at least push the table a bit lah! *Carries and shifts the table, many people looking*

After that she walked back to the cooking area, where she threw us an angry look at us. So angry like we were her 杀父仇人 (enemy who killed her father) Behind her angry stares I imagined what were in her mind, maybe chopping us up into a million pieces, or spitting in our noodles. No kidding, I really had those thoughts. LOL we quickly finished the noodles and left.
If you still feel like visiting Kin Kin after reading my post, you can search for other bloggers’ review. Because I am not even bothered post the shop’s address and location.
And the RM5.30 I paid for the pan mee is definitely the last they’re ever going to get from me. After all, there are many pan mee alternatives in KL with friendlier staff that I can go to. So, if Kin Kin thinks their pan mee is so godlike tasty that they can treat customers the way they treated me, they are obviously wrong. 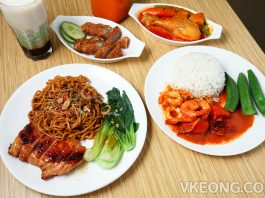