On my last week working in NCS I was fortunate enough to join my first and also last team building event in Gua Tempurung, Perak. I will post up some photos of the caves if possible later. Kok Thai restaurant in Kinta City was the place where we had our lunch.

The restaurant is quite classy and had a big shark fin displayed at the counter. There were many people having lunch, even at 2pm.

First dish to arrive was White Carrot Soup. Nothing much to comment on this.. just drink only lol.

Then came the shocker, a HUGE plate of Pai Kuat Wong. The pork ribs were stacked like a small hill.. so much that the 9 of us cannot finish the dish. I liked the dish a lot because they really used pork ribs (as the name implies) instead of pork.

Hou Si Fatt Choy had sea cucumber, mushroom, oysters and fatt choy cooked in a claypot. This should be a quite expensive dish because of the ingredients
used.. tastes great too.

The fried fish was covered with sweet, sour and spicy sauce. It reminded me of a Malay dish, called Ikan Tiga Rasa which I used to have back in my University days.

The prawns were fresh and good but I liked the deep fried butter strands more, they tasted very sweet!

Bleh food with bleh photo. This is chicken cooked with a LOT of ginger.. hated it, yucks. I think it was left pretty much untouched as soon as everyone had a taste of it lol.

Dessert – Longan syrup, it was very diluted.. eh waitress you added too much water :P

Another dessert – Kaya Puffs. They were still warm and crunchy so they should be freshly made. Good stuff, too bad I can only have a piece. 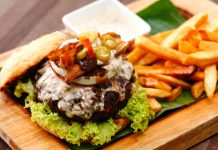