Kuishin-Bo was the last Japanese restaurant in Singapore I went before coming back to Malaysia. The restaurant is popular for its Japanese buffet. Unless you want to risk not having any seats, reservation is a must especially during weekends. Sushi and sashimi, very good quality and fresh for a buffet. Tempura prepared with really huge and meaty prawns, some fried items and Yakitori. Among the cold seafood the sweet mussel is said to be a specialty but I found it to be sandy and chewy.. not my type of seafood. The prawns were enjoyable though, sea-fresh and succulent. Surprisingly I found that I liked the Kaminabe (Japanese Paper Steamboat) the most. The soup stock was already very flavorful on its own, made even sweeter with the additional seafood thrown in. A The seafood in each Kaminabe differs but typically most of them contain mushroom, prawn, vege, beancurd, salmon and Naruto fish cake slices. Selection of desserts is good but nothing really related to Japanese. Well maybe except for the soft serve green tea ice ceam. My friend thought it was too sweet but I like it that way lol. Some toppings like raisins and crushed peanuts are available beside the vending machine. The Kaminabe station.. where you choose the paper steamboat with the ingredients most appealing to you. The fried food section where you get the Japanese Fried Chicken, Tempura and Yakitori. They are constantly being replenished so customers won’t need to fight for it. This is indeed refreshing, unlike some Japanese buffet restaurants in Malaysia.. For only $28.50 a pax I thought the buffet spread was good enough and I don’t mind returning again (given that I do work in Singapore in future lah) But considering that an extra 7 dollar would give you free flow of Snow Crabs, maybe we should have taken the dinner buffet. 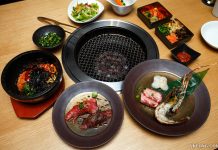