I am probably the latest to blog about Leong Ya‘s famous Yong Tau Fu and Ji Bao Gai (Paper Wrapped Chicken) in Seri Kembangan. Back in the days when I was still studying and working in MMU Cyberjaya, Seri Kembangan was one of the nearest towns we could go for shopping and movies.
We would take a bus to Serdang’s KTM and then walk to Mines shopping center. On the way there, we would surely walk past all three Leong Ya’s restaurants. See, I had so many opportunities to try the food but I didn’t. Kinda regret actually. But, now that I am back to Cyberjaya once again I finally got the chance to try it. Even so, this is a super long overdue post, lol. We only ordered two pieces of Ji Bao Gai and a small plate of Yong Tau Fu to go with white rice. They have dai chow as well but my main objective is only to try the these two things. You may get chicken wing, breast or drumstick depending on your luck. Getting the chicken wing would be the unluckiest one because it’s quite difficult to eat with fork and spoon lol.
The gravy might be a bit salty for some but it was OK for me if taken with rice. Each restaurant has its own secret marinade which will the deciding factor in the paper wrapped chicken’s taste. But the usual ingredients will always have ginger, oyster sauce and maybe some five spice powder.
Another factor would be the warmth of the dish when served. From a separate experience, I noticed the taste and texture of the chicken would deteriorate greatly if eaten cold. So, if you see the restaurant is serving cold Ji Bao Gai you better avoid ordering it. One thing that Leong Ya can improve on is to introduce a proper menu for the Yong Tau Fu items. Without it, customers had to listen to the waiters mumbling the food instead.
Do take note that the Yong Tau Fu is served together with the sauce. Well, that’s fine for me but I prefer to have the sweet sauce to come separated. If you are like me, remember to mention that to them. Taste wise I found it to be pretty normal and similar with other Yong Tau Fu around. Leong Ya has three branches here, one with air-con at the front and another two behind it. Weird eh? And all the branches are only 5 minutes away from each other. Rumors say the family had a feud so the siblings are running the business on their own now.
Leong Ya Indah 梁雅(女) – was the branch I went, said to be run by the daughter. Anyway I am not interested in the rumor or their feud, but these cases seem to be quite common in F&B. When it comes to business and money, some won’t play nice even if it’s their own family.

Other reviews:
she, the epicuriousgirl
Kampung Boy City Gal
Babe In The City 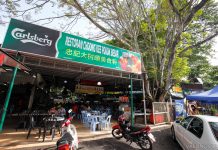