If you happen to be at Seremban or Port Dickson and looking for food, there is a specialty that you ought to try. This gigantic bun made by Lucky King Bun is what I am referring to. I have no doubt that it is already well known among Negeri Sembilan folks, but for outstation people and international tourists alike, I think you will find it something interesting and appreciable.
As Malaysians, I believe we have all tried dipping bread into curries when we were kids and we still do it now and then. The idea is outright simple, yet it is satisfyingly delicious. So what Lucky did was improvised on the concept by wrapping the curry inside the bun instead of serving them separately. Lucky initially started out with three flavors of bun: crab curry, herbal chicken and chicken curry. It was not until recently that the new ‘Yin Yong’ flavor was introduced. And just like the name says, it consists of two different pork dishes within the same bun: pork ribs curry and Dongpo pork (东坡肉). The latter is prepared with half fat and half lean meat and has a combination of sweet and savory flavor, great for those who can’t take spicy food – children for example.
To ensure both the bun and curry taste as good as possible, only high quality ingredients are used and these include imported potatoes and well-known brands of butter and milk just to name a few. Couple that with decades of baking experience, the end product is soft and fluffy inside with a shiny golden-brown thin crust that oozes buttery fragrance. Priced at RM38 each, each bun could be shared among up to 4 people due to its huge size. Between the two flavors, I like the pork ribs curry better simply because I have always loved it since young. There are only a handful of pork ribs curry that I would classify as great and Lucky’s rendition is one of them. The curry gravy is thick just as it should be (for dipping purpose), aromatic and packs a strong flavor after being cooked with more than 20 different spices and ingredients for hours. As for the Dongpo meat, even though it has an oily look but the good thing is it does not taste greasy at all. During the long stewing process the meat’s fat had lost most of its grease and becomes jelly-like. So even the meat looks sinfully fat, they don’t actually feel like one. Another unique dish we tried was the ‘Dragon Tiger Seafood Pot’ or also referred as ‘Dragon and Tiger Reunion’ to some. This extraordinary looking dish is a combination of milky and mild curry soup, fused with generous servings of fresh seafood such as a whole crab, prawns, clams, fish slices and meat balls. The dish is comes in boiling claypot along with a plate of rice vermicelli that would soak up the flavor of the soup better compared to rice. Now if you are wondering, this elaborate dish actually got its name from the direct translation of its Cantonese name 龙虎会 (pronounced ‘Lung Fu Wui’) which roughly means the ‘meeting of Dragon (crab) and Tiger (prawn)’.
This dish looks and sounds expensive but you would be surprised to know that even with so much seafood given, one serving like this cost only RM60 – a reasonable price that I feel is borderline cheap. If a similar dish like this is to be served in KL, it would easily cost twice as much! We really enjoyed this dish because the seafood tasted absolutely fresh and we particularly loved the crab. It was large sized, packed with meat and we could still taste the original sweetness of its flesh because the curry soup’s flavor was quite mild. This was the first time I had something like this and it proved to be very memorable indeed. The popularity of Lucky’s curry buns is evident and most of them were snapped up before we left. Most of the customers who dined at the restaurant would also not hesitate to order one as side dish. Anyway, no preservatives are used in making the buns so they are best eaten in the same day if not kept refrigerated. For those who are taking away, the best way to reheat the buns is to steam them instead of rebaking them, as the latter would affect the bread’s taste and texture. Besides Lukut, Lucky also has an outlet in Seremban where you could get your hands on their famous curry buns. Don’t worry they taste the same because they are all prepared in the same factory by the same people. Some customers who are gung-ho about the buns would actually get them directly from the factory as soon as they are fresh out of the oven – that is when they smell and taste the best. 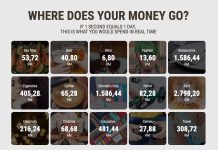