The funny thing is I woke up at 7am and drove to Taman SEA (PJ) from Kepong to eat at a restaurant called Kepong Crab House. But I am not here to eat crab or seafood, it’s Lum Choong Kee‘s wantan noodles that I am after.
I am not sure if you know this, but actually there used to be a good roast pork noodle in Aman Suria, then they suddenly ceased operations. Now, the proprietor has found a new partner and they are venturing into food business again. 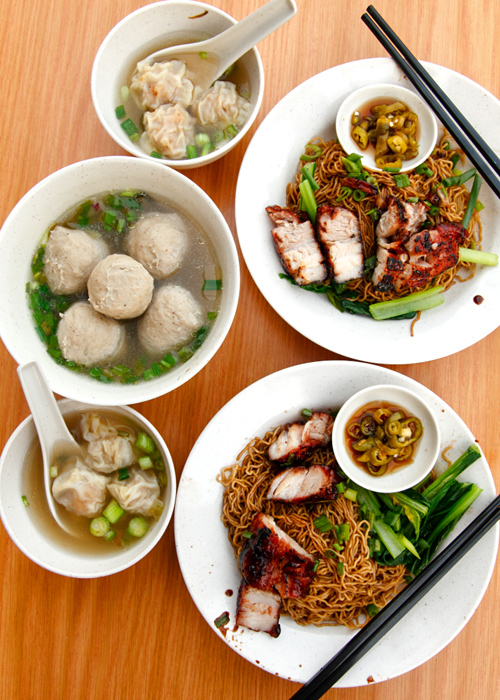 Despite being less than 2 weeks old and operating from a coffee shop located at a somewhat hidden spot, they have consistently sold out within 2 hours of opening. No wonder they are currently the talk of the town and some customers are willing to travel from Wangsa Maju just to eat here.
I even have a friend who came all the way from Klang just to have wantan mee breakfast with me that day, so hats off to you man. Therefore, if you are a wantan mee or char siew lover, you owe it to yourself to try it at least once. 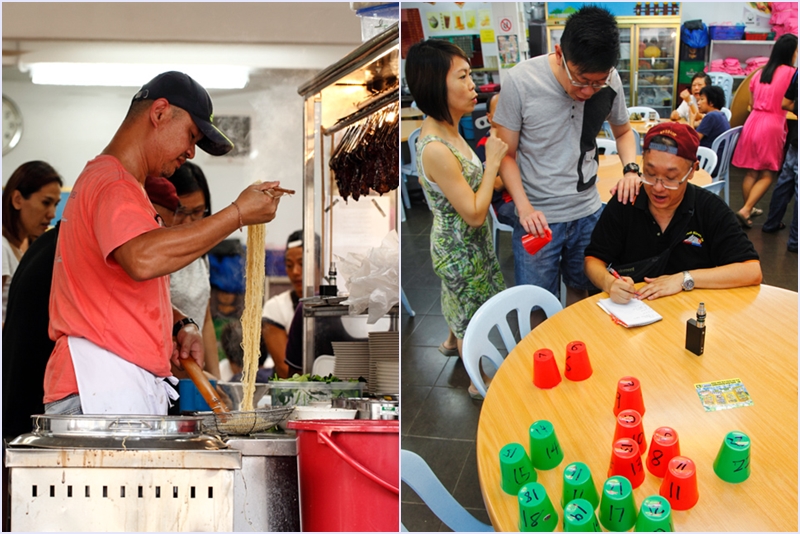 First thing first. Since the official opening hour is 8am, the best time to be here is a couple of minutes before that, so that you can grab your ‘number’ in the form of a written cup. Do get ready to be a bit ‘kiasu’ because there will be other customers who come later (and tapao A LOT) but get an earlier number.
Depends on your character lah, if you are the type who don’t mind waiting a bit longer, then just wait for your turn patiently. I myself reached here at 7.45am and still got number 6, and my order arrived about 15 minutes later. For the rest who came later, I observed the waiting time could be as long as 45 minutes. 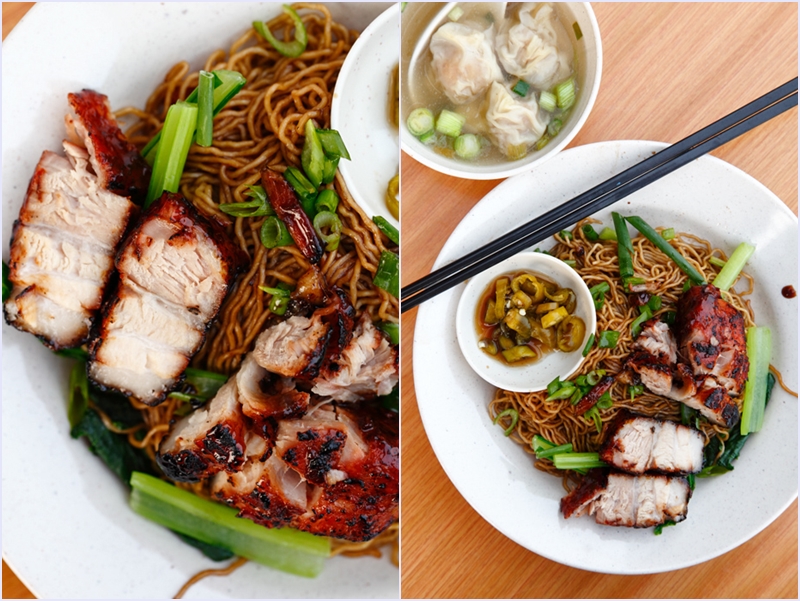 With that out of the way, lets talk about wantan mee in general. Personally, I have encountered too many stalls that excel in certain aspects only.
For example, one stall could have great springy noodles but tough as hide char siew, while the other has awesome char siew, but flat and texture-less noodles. And just when you think you found one that could be it, the wantan is tiny and unsatisfying. It’s more than often a give or take.
This is where Lum Choong Kee’s wantan mee comes in. I feel that they have really done their homework prior to hopping into the business, as their wantan mee is great in every aspect. They might not be the best in everything, but they certainly have what they refer to as the ‘full package’. 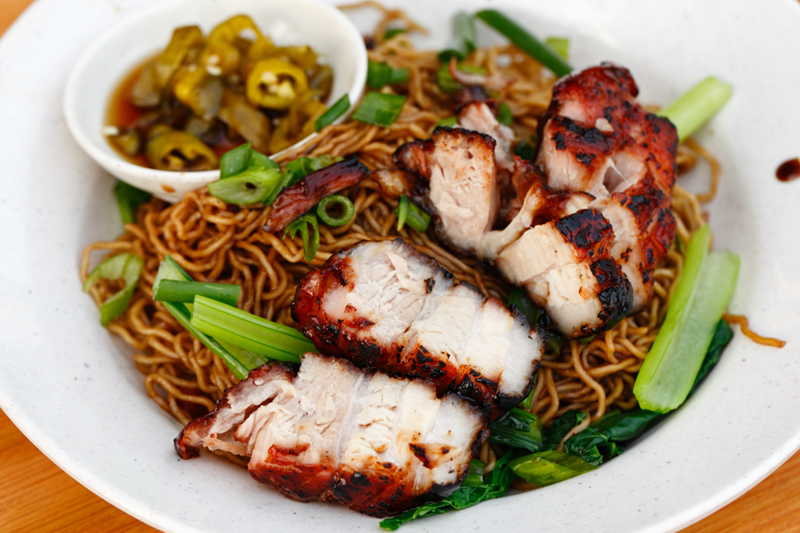 For a start, the noodle is dry yet not a sticky mess, springy with a pleasant bite and it’s not drenched in dark soya sauce. Then, lard is thrown in for the soul and much needed aroma. 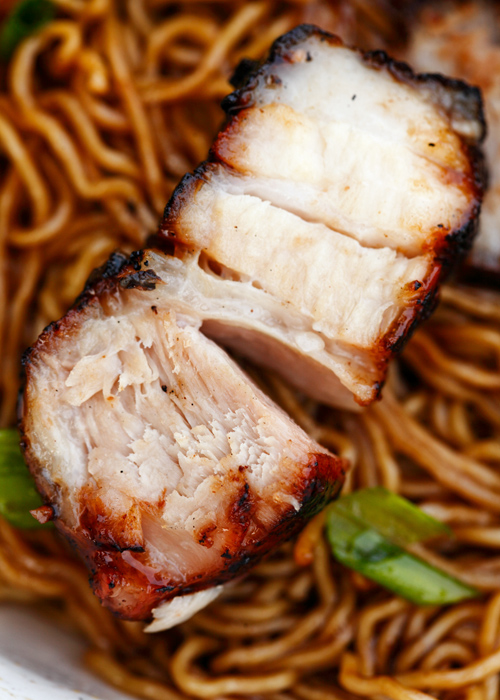 The thick slices of pork belly char siew is undeniably delicious. I will not go as far as saying it melts in your mouth because that’s really an exaggeration and applies only for the fatty parts.
However, the meat is super tender and dissolves in your mouth effortlessly. Taste wise it leans slightly sweet if you eat it on its own, but complements the noodle extremely well. 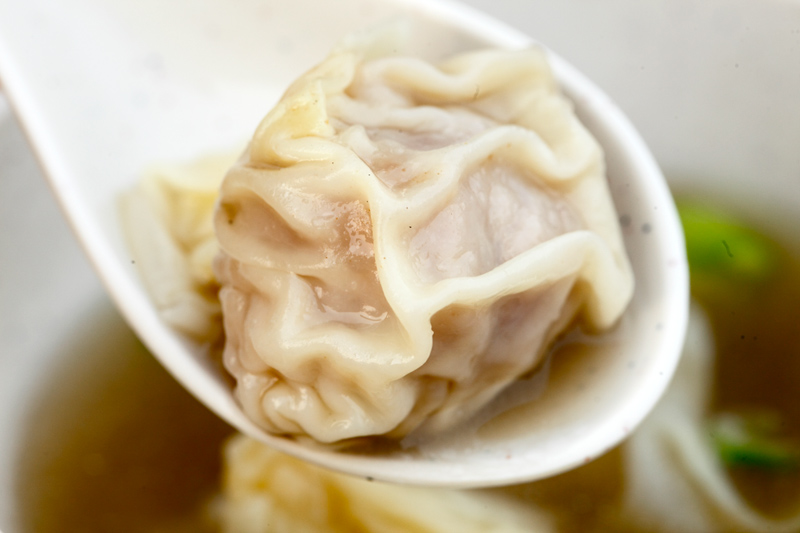 Lastly, the plump and tightly wrapped wantan is filled with flavorful minced pork meat. Not to mention the size is a lot bigger compared to the other places in town. 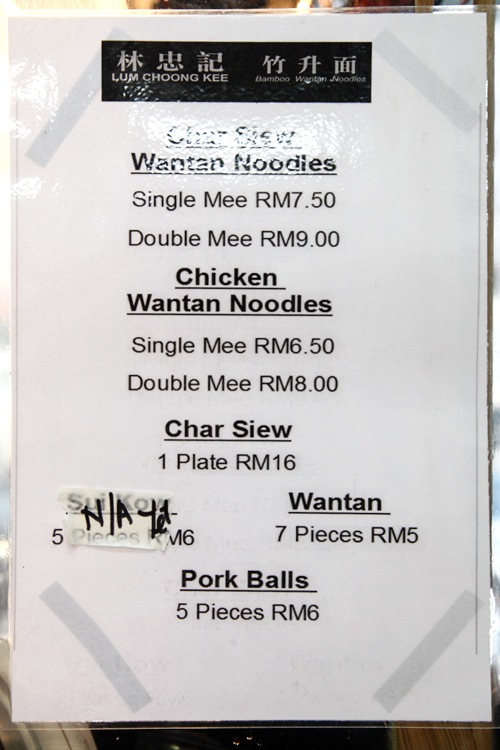 So even though the noodles’ prices here is a ringgit or two higher than usual (depending on where you eat) the generous serving of char siew and wantan are worth the extra bucks. 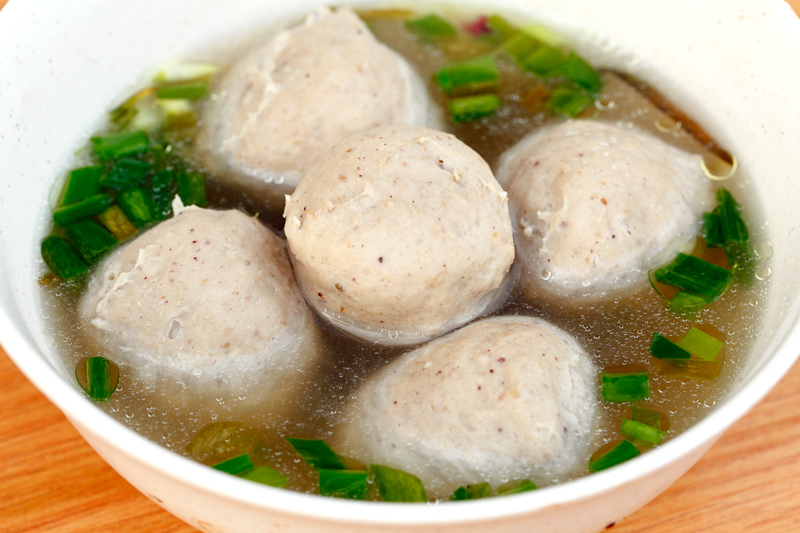 Besides wantan mee, they also have pork meat balls on the menu. They are equally delectable; albeit sourced from someone else instead making it themselves. 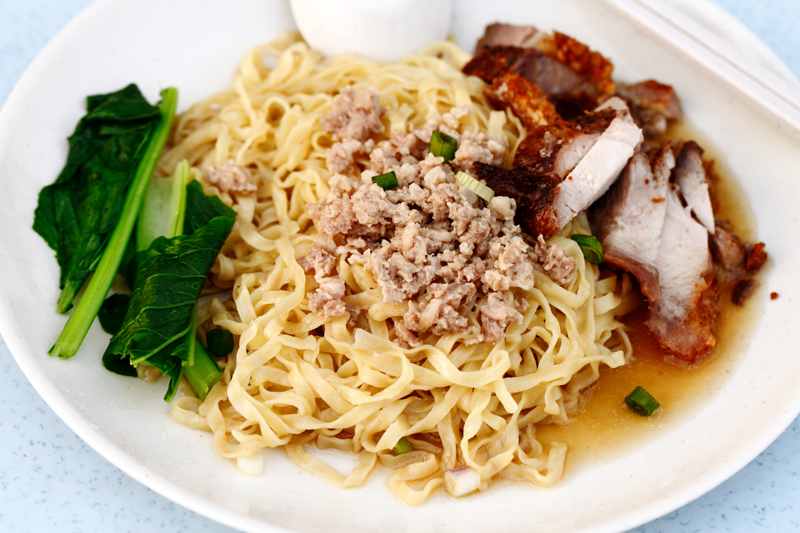 In any case you reached here too late and they are sold out, you can always give the Roast Meat Hakka Noodles a try. It’s pretty good in my book. 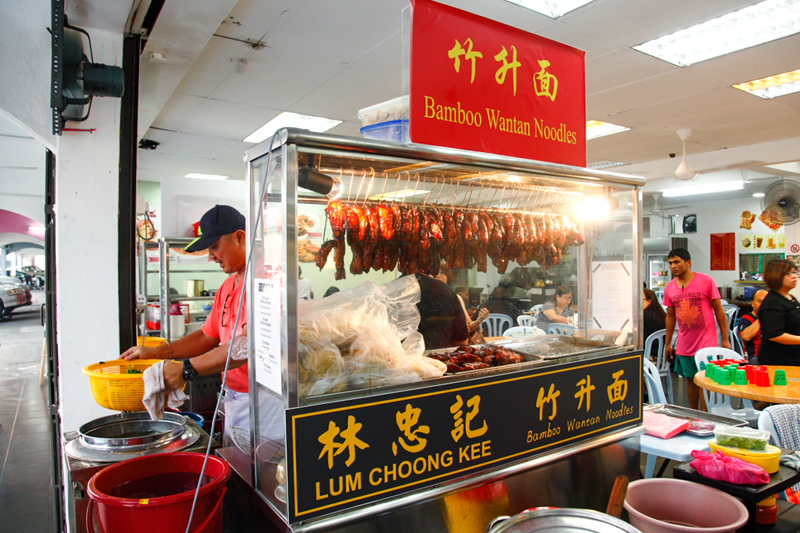 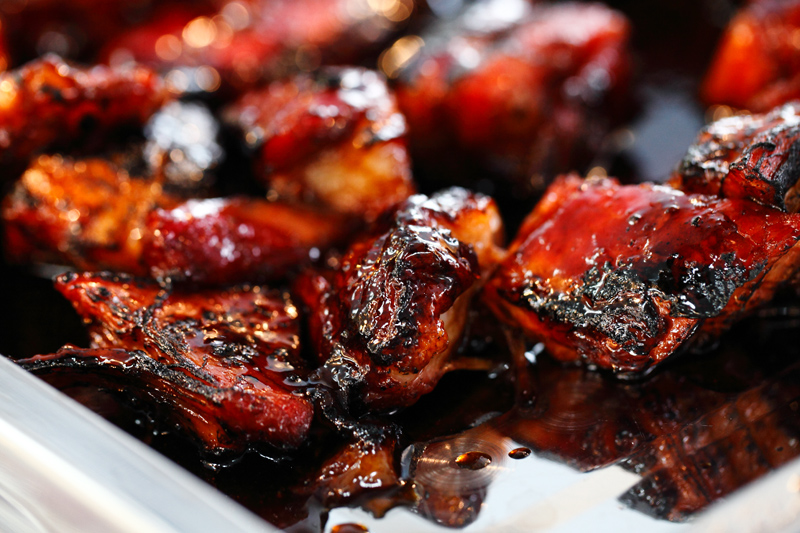 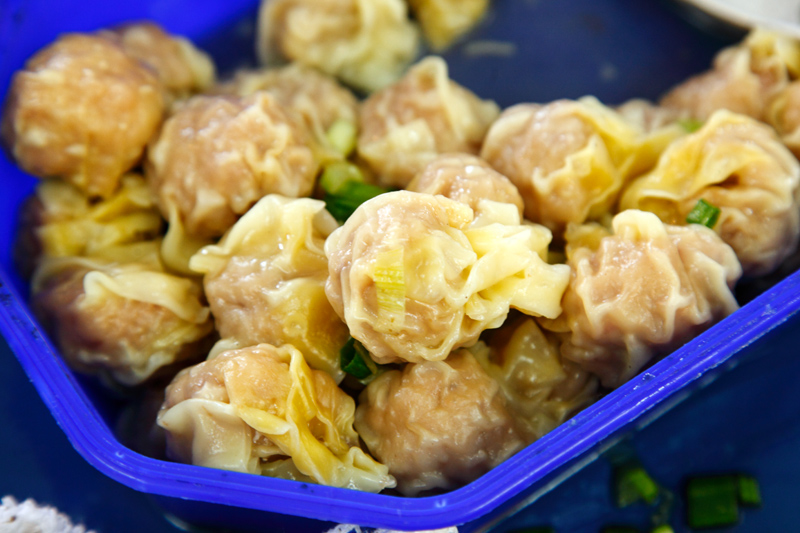 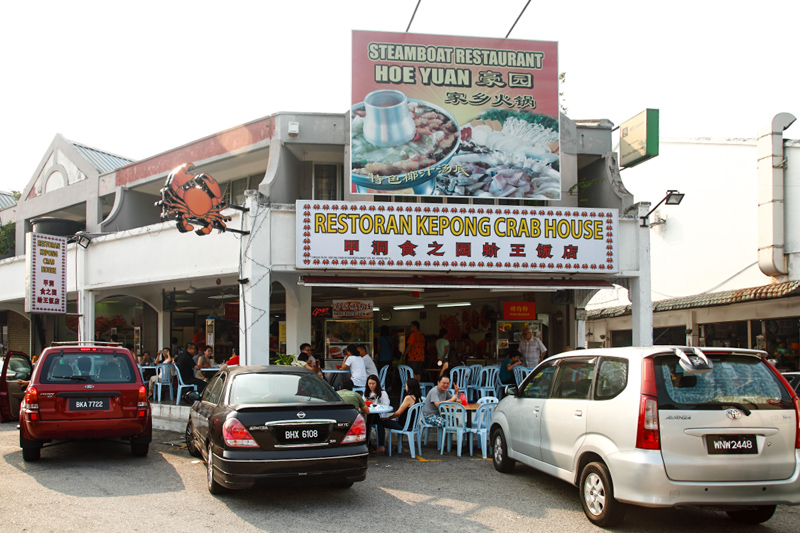 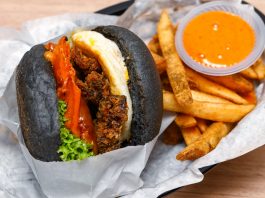 Bangsar May 20, 2017
ABOUT US
VKEONG.COM - Malaysia Food and Travel blog with reviews of restaurants, hawker and street food in KL, Penang, Melaka and beyond.
Contact us: vkeong@yahoo.com
FOLLOW US
© VKEONG.COM - All Rights Reserved