About a year ago I went to Munakata‘s Japanese Buffet and I was happy with their authentic Japanese dishes served in the ala-carte buffet. Since then I have been to a couple of Japanese buffets with some even in Singapore.
Speaking from personal experiences I found that although the number of dishes served in Munakata is less compared to the rest, their food quality is hard to beat because they are fresh and only prepared upon order. This is especially true for the cooked food, Teppanyaki and Sashimi (albeit only Salmon Sashimi is available in Munakata) 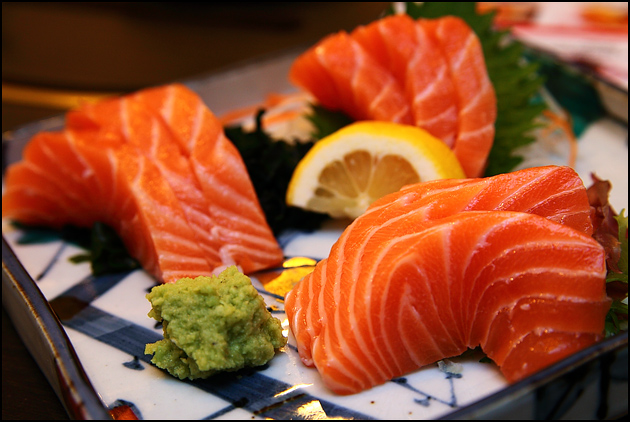 I am also glad that there were no complaints on Munakata since it was posted, while the others were still bombarded with bad experiences and comments every now and then (eg. Tenji). Recently, Munakata updated their ala-carte buffet menu by removing some unpopular items according to customer feedbacks and introduced some new dishes. So I thought it is a high time for me to revisit to try the new dishes while keeping in check the food quality. 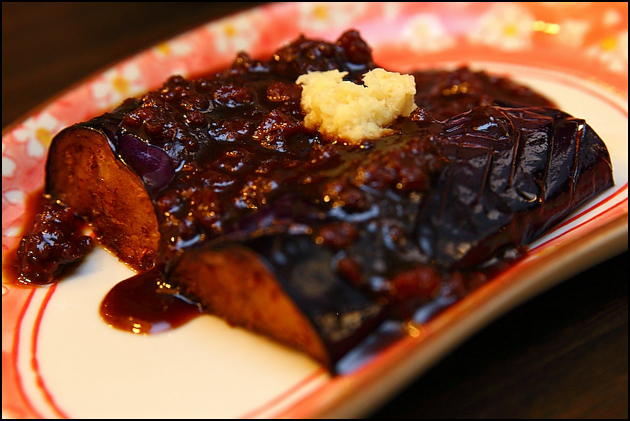 Starting with the new items, Yakinasu No Nikumiso Kaka (Japanese style grilled brinjal topped with minced chicken meat & soya bean paste) Despite being grilled to a soft and tender bite, the eggplants were still able to be picked up and held as a whole using chopsticks, while the toppings actually resembled sambal minus the spiciness. 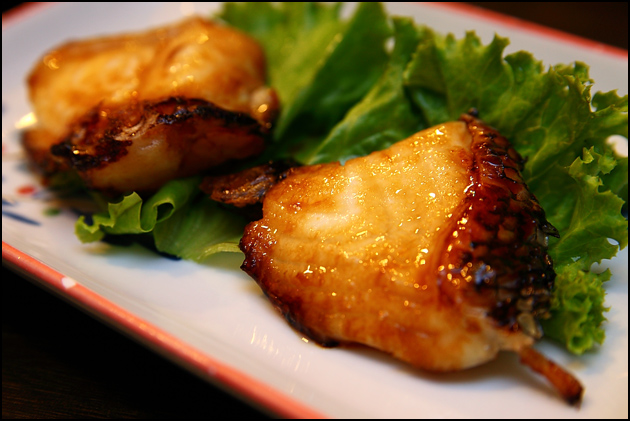 The second new dish could be considered premium since it’s Cod Fish (Gindara Teriyaki) we are talking about. And imagine you could actually have unlimited servings of this expensive fish at Munakata, which is grilled and coated with sweet Teriyaki sauce. I found the cod to be top fresh and you could still taste its natural sweetness (not because of the soya sauce). 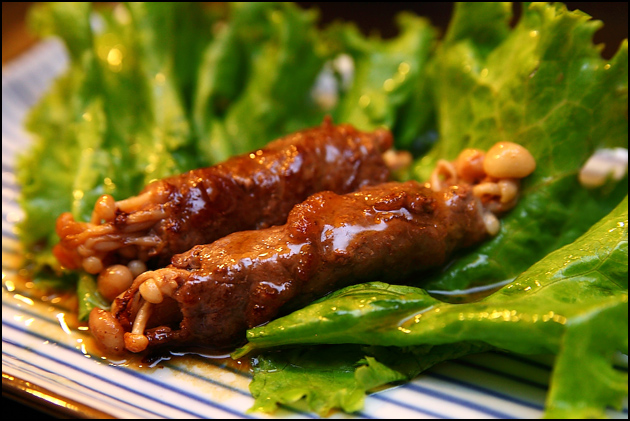 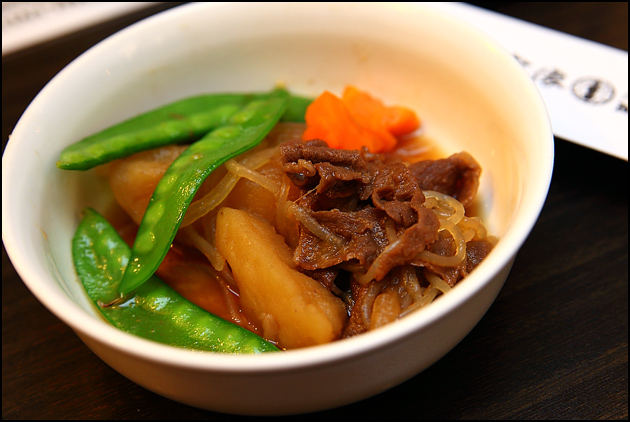 Niku Jyaga (Stewed beef with potatoes) had a strong but good flavor. 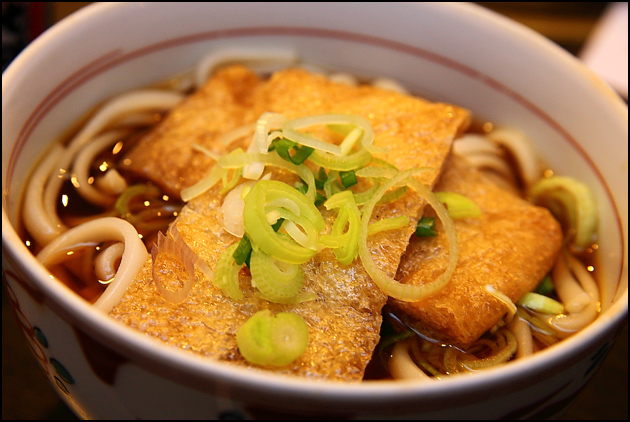 I am not too fond of Udon but I have to say the Kitsune Udon (Hot broth wheat noodles with fried bean curd) was surprisingly enjoyable for me thanks to the flavorful and delicious broth. The Udon is worth trying just for the broth alone. 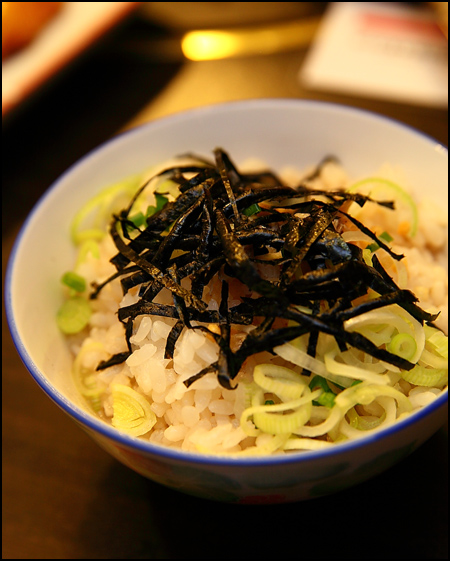 Sake Chazuke (Salmon tea porridge) is a popular traditional Japanese dish usually eaten as a light meal or snack. Like the name suggests, it only involves pouring hot tea or broth over rice with toppings like salmon flakes and nori (seaweed) It is best savored while still hot before the rice gets soggy, and before the tea turns cold. The flavor is very mild but at least it’s healthy. 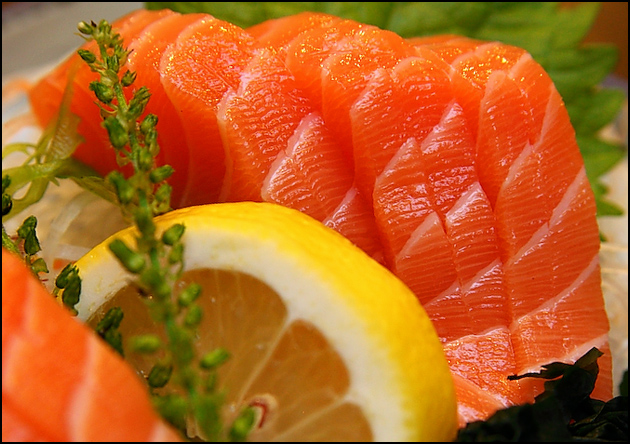 The six dishes mentioned above are the new items in Munakata’s ala carte buffet. Among them, I would say the cod fish and Udon are my top favorites. Then there’s also the salmon sashimi that is no doubt the food I like the most at Munakata. Cut into thick slices and tasted so fresh, I think I had four to five servings to myself. 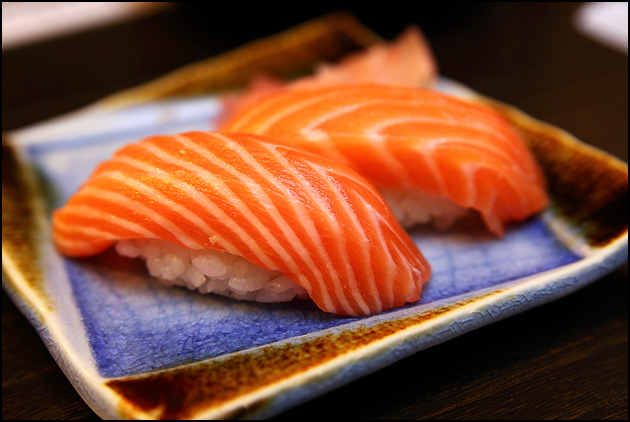 The Nigiri Sushi is topped with slices of salmon from the sashimi so it was fresh and delicious too. 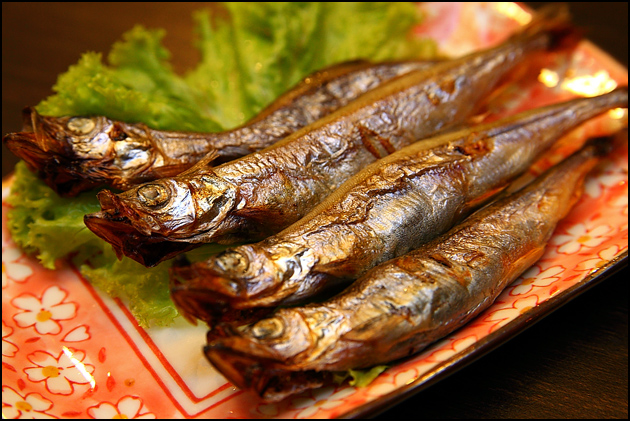 Shishamo – the fish that can be eaten whole and full of crunchy roes. 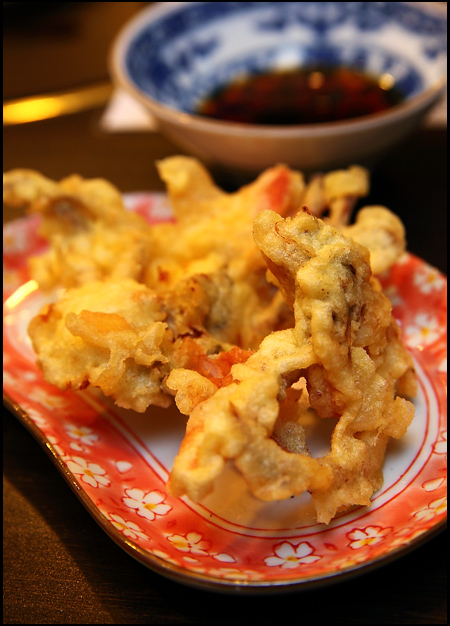 Soft Shell Crab Tempura is another worthy dish to order here for its value. 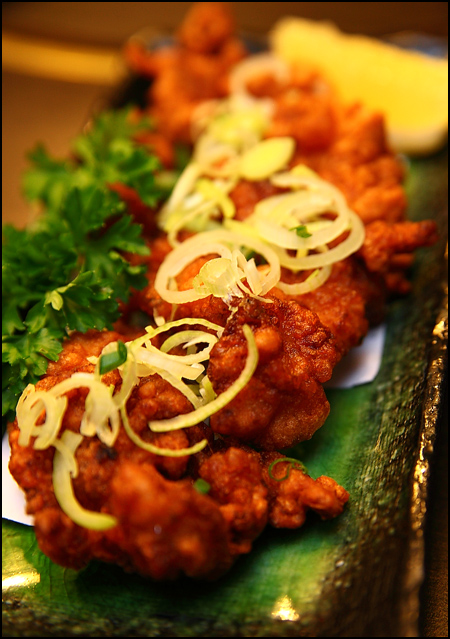 Niwatori No Tatsuta Age (Japanese tatsuta age style deep-fried chicken) has improved since my last visit, the skin felt crispier and the meat was juicy. 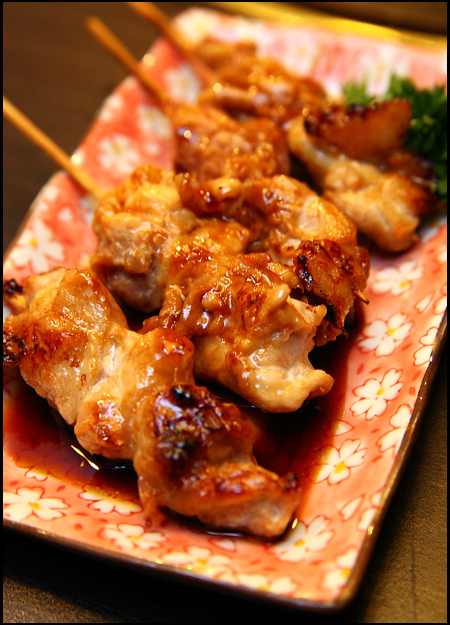 Same for the Yakitori (Barbecued skewered chicken), they were coated with more Teriyaki sauce now making them more flavorful and tastier. 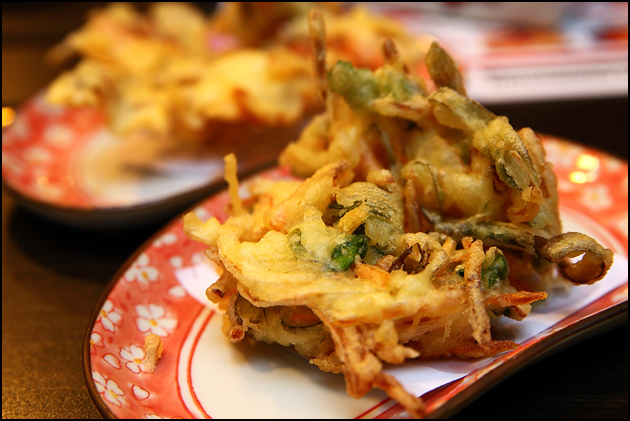 I didn’t order the Kakiage (Mixed vegetables fried in batter) during my last visit because I thought it would be nothing special. Turned out I was mistaken, this simple dish comprising strips of different vegetables was enjoyably crunchy, like having a snack. 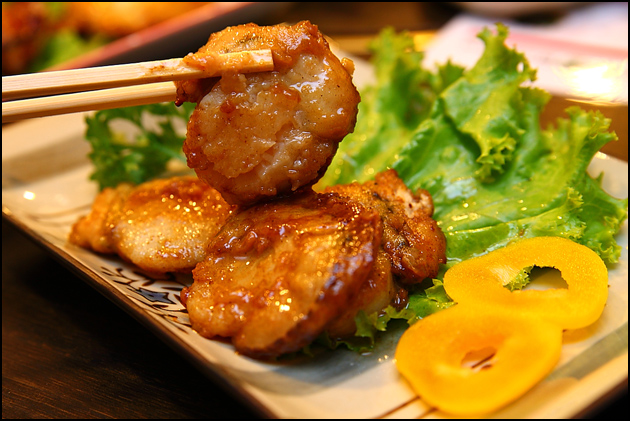 Sadly, the grilled scallops (Hotate No Butter Shoyu Yaki) was a bit off that day being slightly overcooked resulting in a rather mushy texture instead of springy. 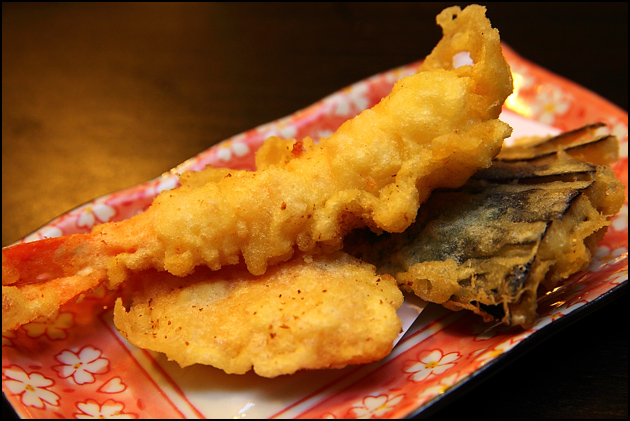 For tempura lovers there’s Tempura Moriawase (Assorted seafood & vegetables in batter) that included a large prawn, a piece of fish fillet and eggplant. 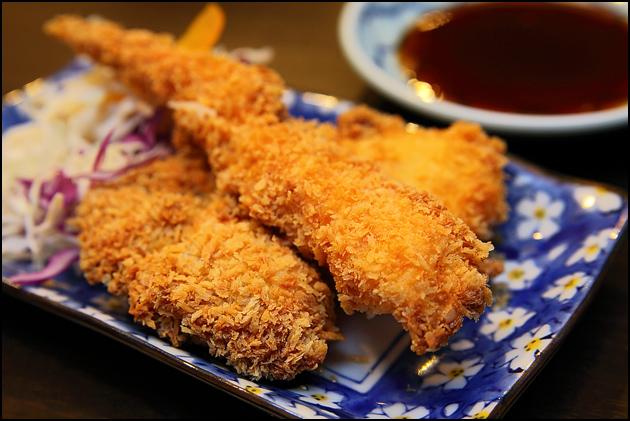 Furai Moriawase (Mixed seafood Tempura) is quite similar to the tempura but have a crunchy breaded coating and sweet vinegar sauce is used for the dipping. I actually preferred the normal seafood tempura to this. 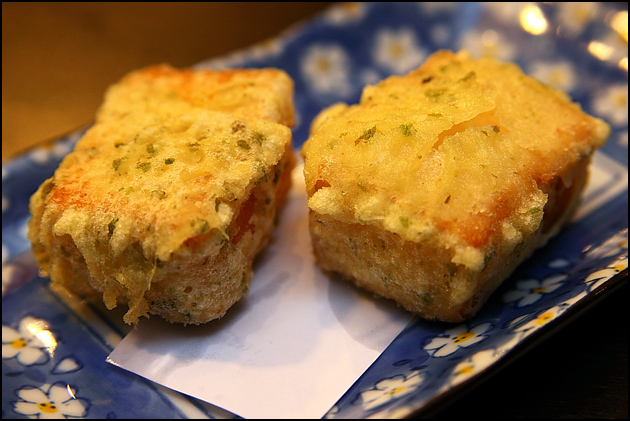 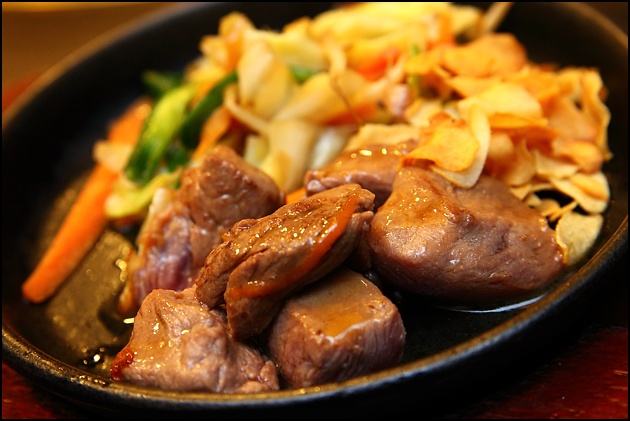 Although the Japanese Beef Steak was nothing really impressive, the chunky beef pieces were tender to the bite and not chewy at all. 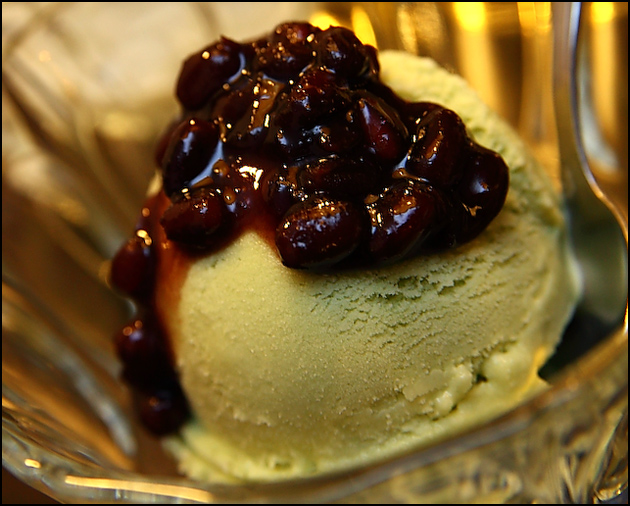 There are only two types of desserts at Munakata and I highly recommend the homemade green tea ice cream topped with red beans. The slightly gritty texture indicates that the ice cream is made with plenty of green tea and not with artificial flavorings instead.
Munakata is currently having a gift voucher promotion where customers will get a RM10 Munakata Gift Voucher for every RM100 spent in a single receipt. This promotion will be valid until 31st December 2010. The pricing has been revised as well so please refer to the newest price structure as follow.

Gyu-Kaku All You Can Eat Japanese BBQ Buffet @ Publika