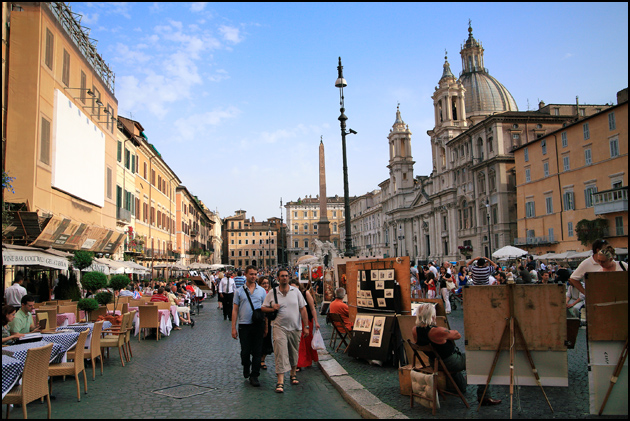 Piazza Navona is a city square built on the site of the Stadium of Domitian, and follows the stadium’s open space form. It used to be known as ‘Circus Agonalis’, which was a venue to watch the games by the ancient Romans. The square is beautiful, lively but not crowded so a visit here is warranted. 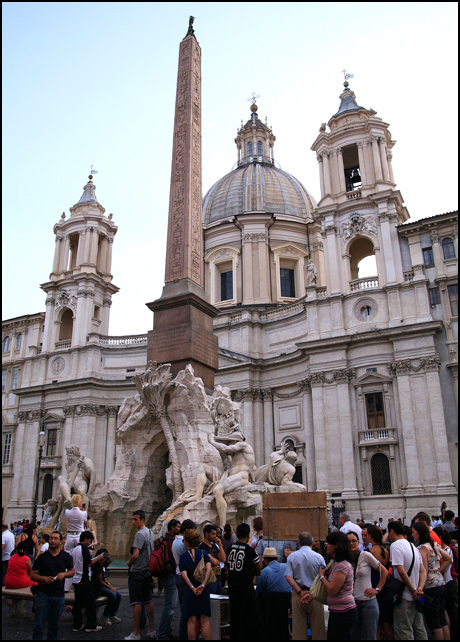 The famous Fontana dei Quattro Fiumi (Fountain of the Four Rivers) stands in the center, flanked by tourists. It features four gods on the fountain corners representing the four major rivers of the world at that time: the Nile, Danube, Ganges and Plate. 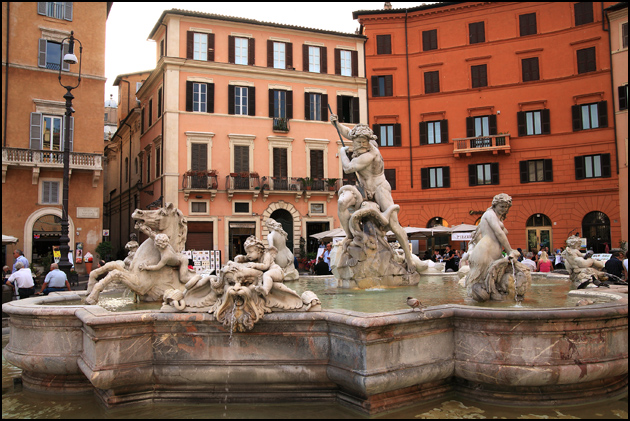 La Fontana del Moro (the Moor Fountain) is an additional fountain found at the southern end of the Piazza Navona, representing a Moor standing in a conch shell, wrestling a dolphin and surrounded by four Tritons. 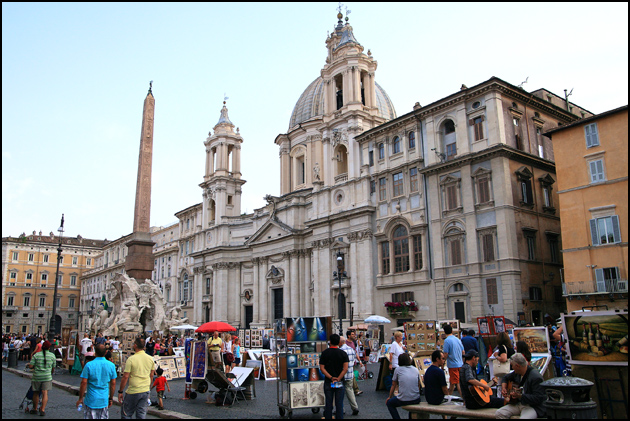 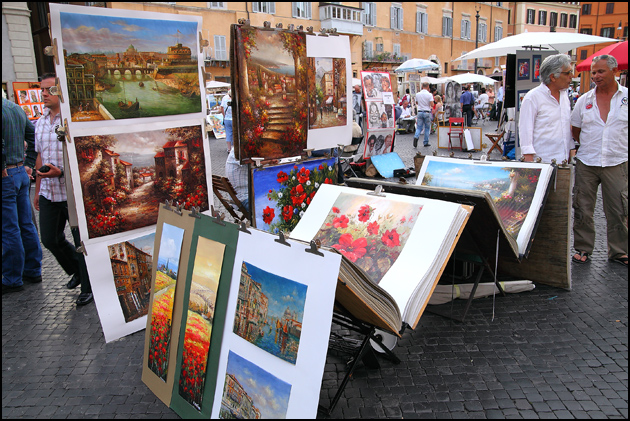 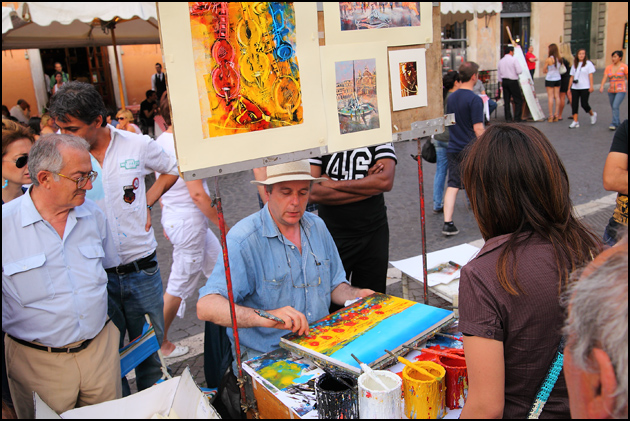 Plenty of artists make their living here selling their artworks. 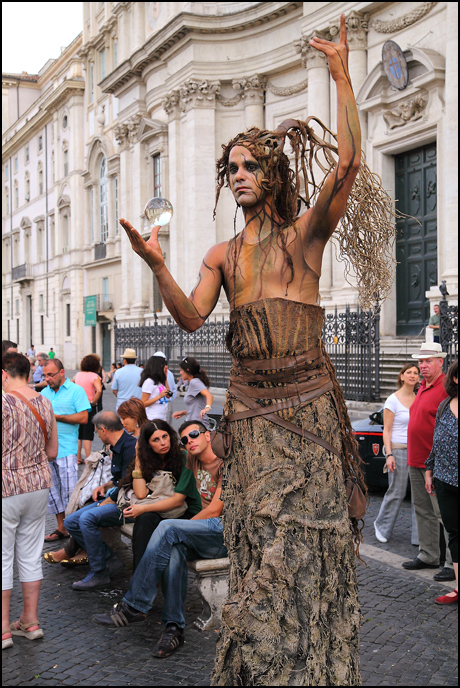 Street performers can also be seen here, though I am not sure if they are supposed to be entertaining, or are more of an eyesore. 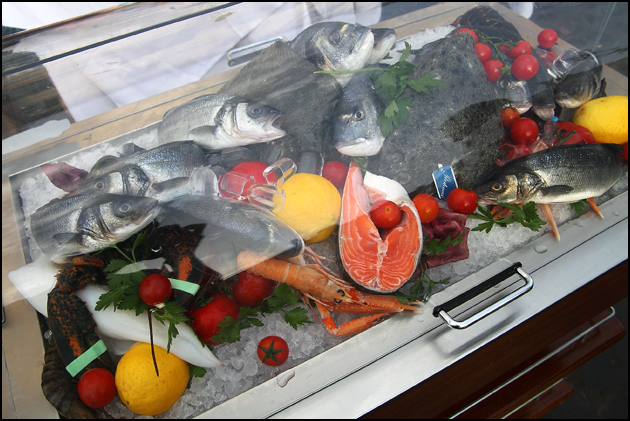 The piazza is surrounded by cafes and restaurants, mostly serving seafood on set tourist-menu. Not cheap at all. 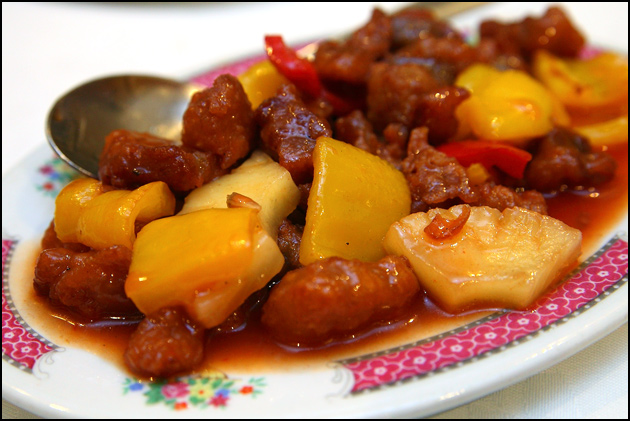 There’s only so much panini, pizza and pasta you could stomach everyday so we went to a Chinese restaurant just downstairs our hostel for dinner. The food was not bad but we had the most ridiculous fried wantan here, which was a deep fried ravioli actually lol. 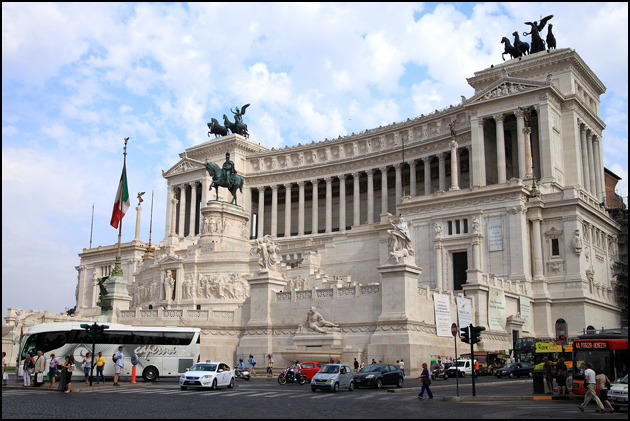 Next day morning we made our way to the Monument to Vittorio Emanuele II, a monument to honour Victor Emanuele, the first king of a unified Italy. The monument is built of pure white marble and features majestic stairways with a huge equestrian sculpture of Victor Emanuele. If I remembered correctly there isn’t any metro nearby and we took a bus instead. 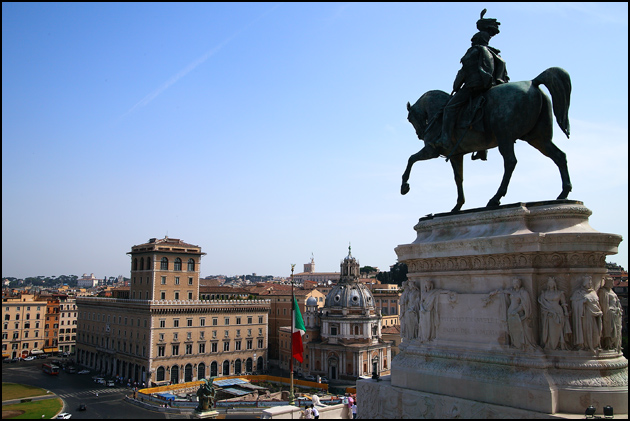 The equestrian sculpture I mentioned earlier, overseeing the city of Rome at the top of the monument. Because the monument is to honour the first king, strict rules are applied here, like keeping quiet and forbidden to sit at anywhere within the monument.
Despite the many warnings many tourists still do all these stuff. And if you are caught, loud whistles will be blown with the guards pointing at you, a rather embarassing situation. 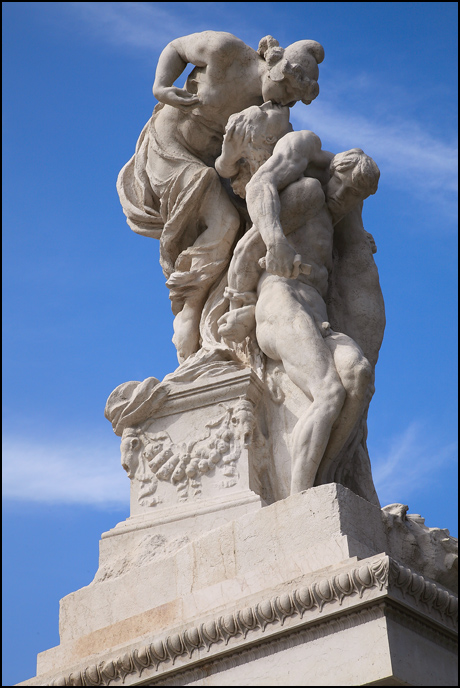 One of the statues at the monument. 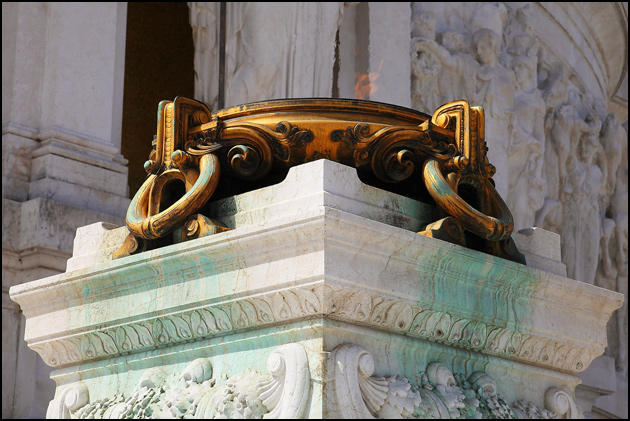 The Tomb of the Unknown Soldier (to commerate unidentified soldiers) is held by an eternal flame under the statue of Italy was built after World War I. The flame burns constantly and never goes out. A few guards with some really huge guns were standing next to it too. 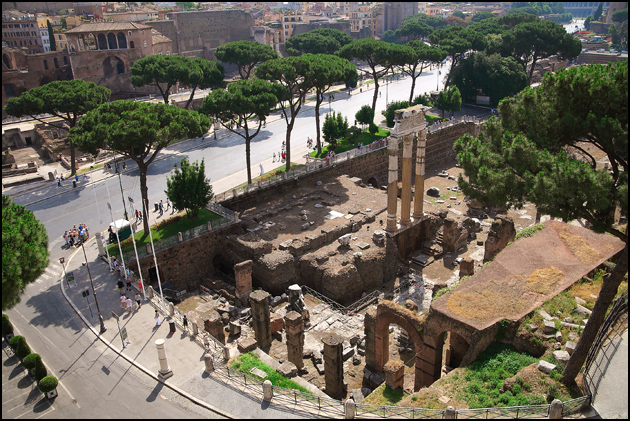 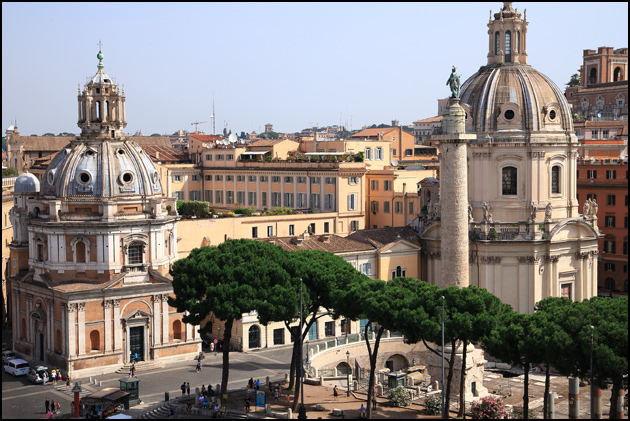 You can take a panoramic elevator to ride to the roof of the monument for a 360 degree view of Rome. This was the main highlight of the visit. 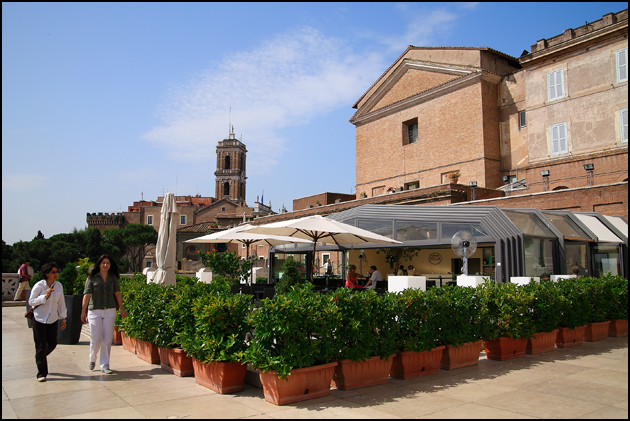 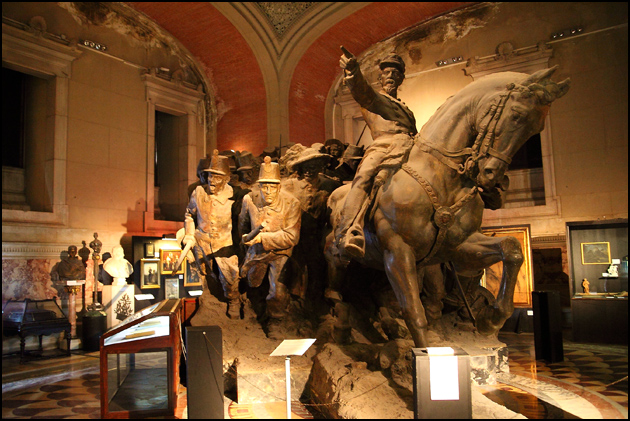 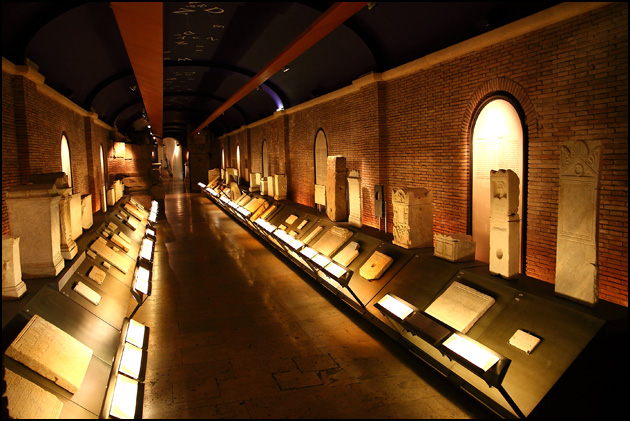 The musuem of Italian Reunification is at the base of the structure but we just did a brief walk through. 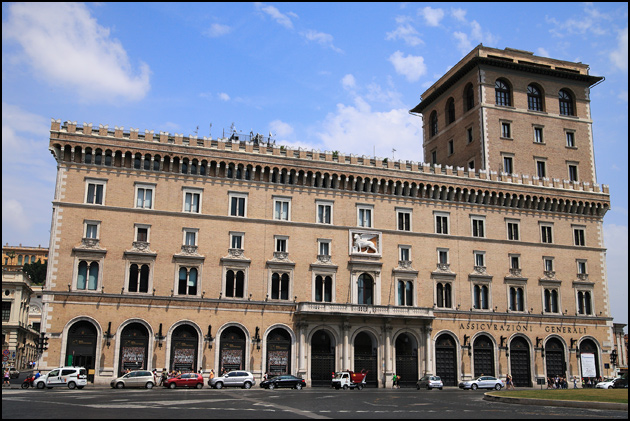 Directly opposite the monument is the Palazzo delle Assicurazioni, where you can find a lot of bus services. 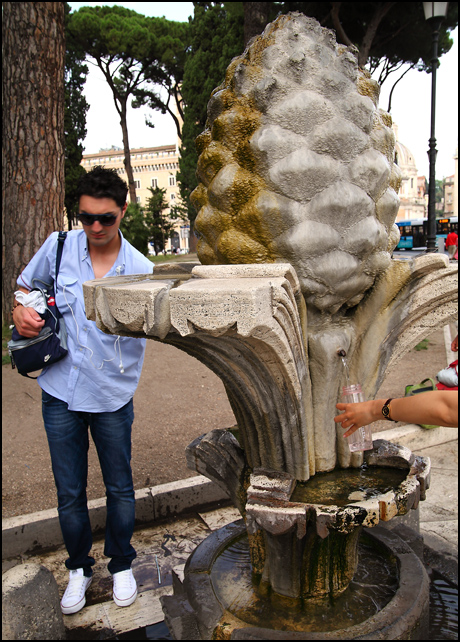 You will also see many fountains or spigots running throughout the city providing free sources of cold, refreshing acqua naturale. It is recommended to bring a water bottle along when you walk in Rome so you can fill it up, instead of purchasing overpriced mineral water from the street vendors. Trust me, this free water tastes a lot better and much more refreshing. 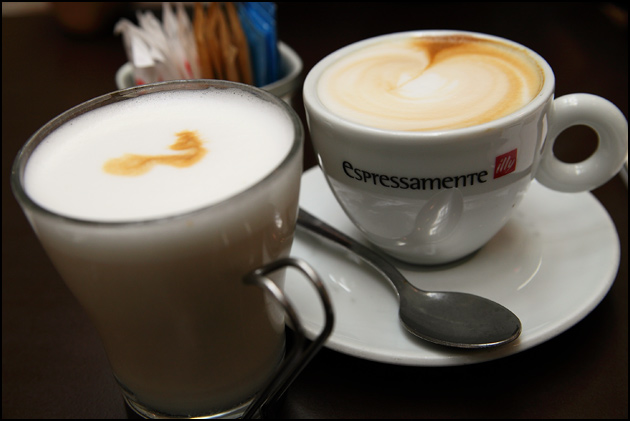 Before continuing our long walk we had a break at a nearby shopping mall, the coffee was great albeit expensive. Always remember to have your coffee at the counter if you plan to save more money. 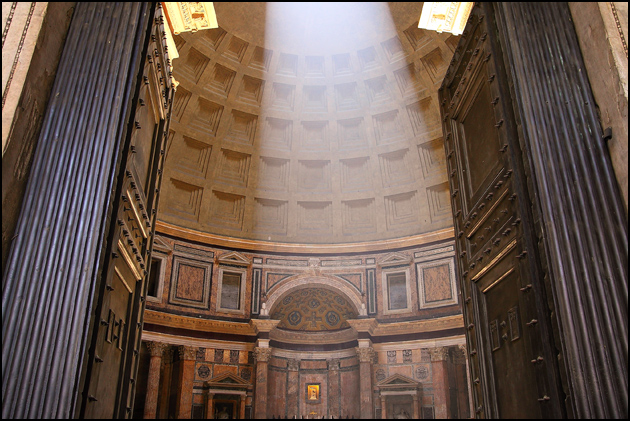 Then we headed to the Pantheon, one of the must sees in Rome for being an architectural wonder. Its dome is a perfect half-sphere made of poured concrete and the most amazing about it is that there are nothing to support it, not even an arch or vault. 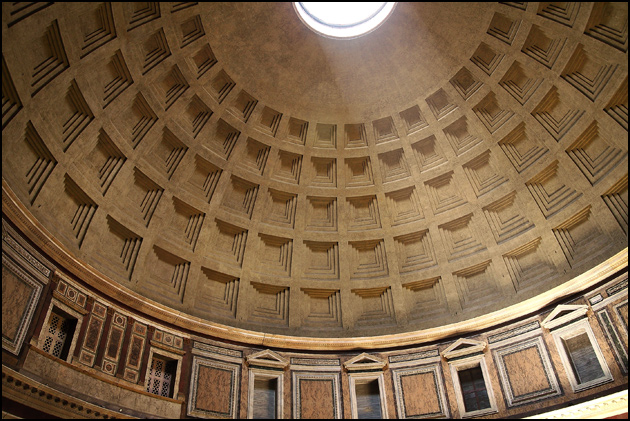 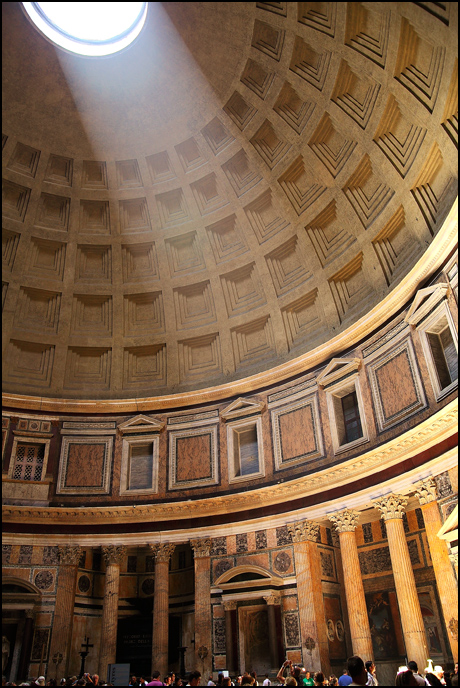 What immediately captures your attention would be the light. It enters the Pantheon through the roof, which was used as a sundial to indicate the dates of equinoxes and solstices.