Two weeks ago Nagomi Shabu Shabu organized a Food Blogger’s Night at Menara Hap Seng – where invited food bloggers enjoyed a 50% discount on the food (exclusing beverages) ordered.
The idea was suggested by Tam Poh Poh – COO of Nagomi and I was asked to co-host of the event as well as inviting other food bloggers to attend the event. Luckily for Jason and Simon who have a wider circle of food bloggers as friends, quite many turned out for the night hence making the event a success. It was a pity that Jason couldn’t make it in the last minute though :(
Anyway, I have blogged about Nagomi’s food last year so I won’t be repeating myself again on the foods’ description. I just wanna show the photos taken that night. Each shabu shabu set comes with a big plate of vegetable and those were reserved for the guests coming that night. Can you imagine the number of people who turned up for the event? While waiting for the others to come, we snacked on the Japanese peas. I gotta say it’s pretty addictive, but I won’t be paying to have it in any Japanese restaurants yet though. Then I walked around and saw the staff preparing salmon sets by arranging them in a flower shape. A big plate of soft shell crabs on the sashimi counter. A staff slicing Kobe Beef using the machine, also intended for the meal later. I guess Nagomi anticipated that many would order their Kobe Beef that night. Given the 50% discount it would be a waste not to order Kobe Beef that night, 120g for less than 70 bucks only! A great opportunity for those who haven’t tried Kobe Beef before to give this heavenly meat a try. Places our orders and food was getting served. Here, Tam was filling up our shabu shabu pot with chicken broth. Wow it was a real privilege to be served by the COO herself. Kobe Beef Set. What’s special about Kobe Beef is the great amount of marbling in it that contributes to the extreme tenderness and the melt-in-your mouth experience. For me, the best way to enjoy Kobe Beef in a shabu shabu meal is to swish it quickly for a few seconds in the boiling broth, then eat it with slight pink. It’s important not to fully or overcook the meat because it would lose its original flavor and fat into the broth. If you intend to fully cook the Kobe Beef, then Ribeye would be a better choice. I tried to reproduce a very nice photo of the Kobe Beef in the menu but I failed lol. If you have been to Nagomi before you would know which photo I am referring to. I like this photo, a small flag with “your health is our concern” placed on the vegetables hehe. If you didn’t know, the vegetables used for shabu shabu in Nagomi are firstly soaked in icy salt water for 20 minutes, twice. The process would remove all unwanted pesticides, bacteria and insects from the vegetables. Therefore, the vegetables had a sweeter taste. Oh yeah I enjoyed every little bit of the sashimi, no doubt about that. Being a huge fan of raw salmon the Sake Set (150g) was a must for me too. I remembered swishing the thick salmon slices in my first visit, only to realize how stupid I was.
The salmon was so fresh and flavorful on its own it’d be dumb thing to do to cook them (at least for me) In fact, it was way better tasting than the salmon served in the sashimi set I had earlier because they were cut from Salmon Trout, a higher grade of salmon that had to be imported. The salmon arranged to resemble a rose which I mentioned earlier. If you are wondering how a whole Salmon Trout looks like.. stay tuned for my next post, as I will be showing it along with all the slicing and cutting process. The different sauces available for dipping – Ponzu, Chili and Goma. Unagi Sushi, thick sliced and tasted great. It was quite expensive for the original price @ RM8 though. And ended the meal with a scoop of ice cream from Dessert Bar. Thanks Nagomi Shabu Shabu for organizing the event. Looking forward to the next event where we would be able to enjoy great food at a discounted rate again (fingers crossed). 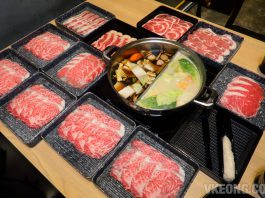 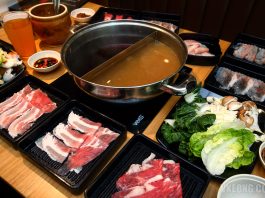 Buffet October 20, 2018
ABOUT US
VKEONG.COM - Malaysia Food and Travel blog with reviews of restaurants, hawker and street food in KL, Penang, Melaka and beyond.
Contact us: vkeong@yahoo.com
FOLLOW US
© VKEONG.COM - All Rights Reserved