Coming from Penang myself I have ridiculously high standards when it comes to Char Koay Teow. But it also means I might be biased when judging Char Koay Teow from other states. In the Southern parts of Malaysia like Melaka, Johor and Singapore, Char Koay Teow is fried to appear dark but the overall concept remains the same since both ‘wok hei’ and lard are important aspects of a good plate of CKT. I feel that comparing the northern and southern CKT is like comparing nasi goreng cina with nasi goreng kampung – they are similar but not the same. In Muar, Char Koay Teow is usually fried together with yellow noodle and is given a nice twist where the locally beloved otak-otak could be added (RM1 for 2 pieces) as additional topping. Frankly speaking this is more of a gimmick than adding any real taste into the dish. Since it is only RM1, I figured why not?
Anyway, if you omitted the otak-otak, you could see that there isn’t much extra ingredients in the noodles other than egg and cockles. So the dish is actually quite dependant on the quality of the soya sauce used as well as the cook’s ability to infuse ‘wok hei’ into it. Although we were not blown away by the CKT, we thought it was pretty decent and could be worth a try if you are new to this style of CKT. The uncle has an exceptional memory and could remember everyone’s order on a busy afternoon. I pity his helper though, who is slightly disabled mentally and had a difficult time keeping up with the orders. 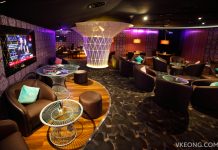