Contrary to the initial impression that P.F. Chang’s is a Chinese restaurant, it’s actually an American owned restaurant with an Asian themed menu – one that’s skewed towards Chinese cuisine. The menu varies accordingly depending on the region where the restaurant is located, so some sushi and dim sum items are not available at their branches in Dubai. 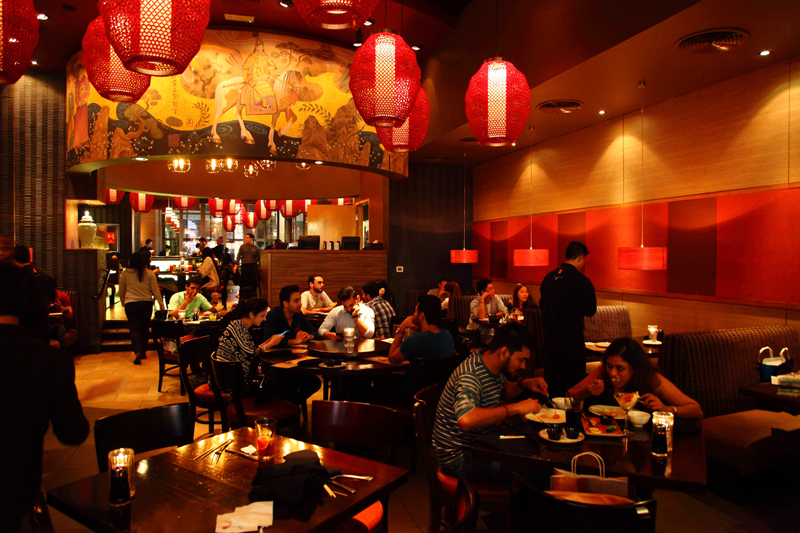 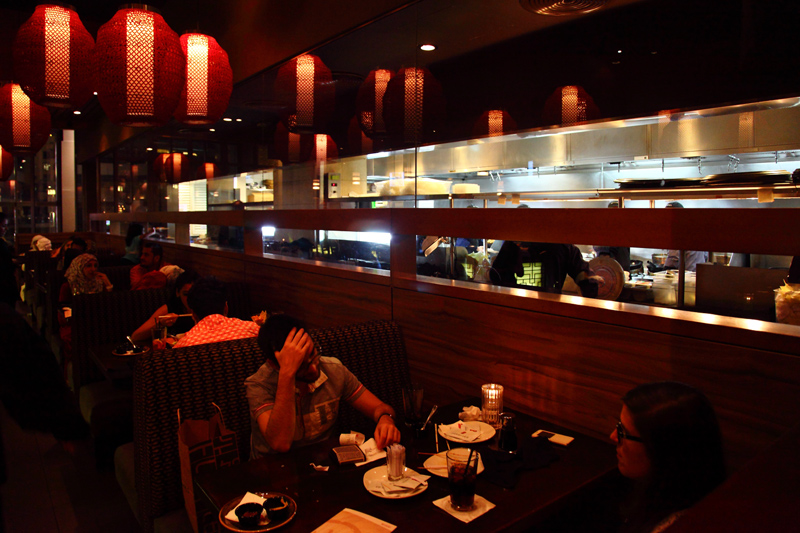 As you can see, the restaurant’s decor is casual American style with Asian accents. The atmosphere is relaxing with nice music in the background that’s not too loud to prevent conversation. An open kitchen gives the restaurant a buzz so you wouldn’t feel bored while waiting for your food to arrive. 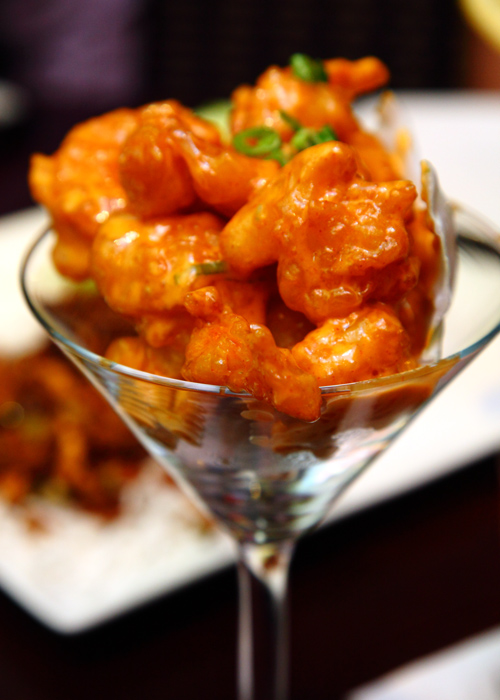 Unless you have a problem with shrimps, their signature Dynamite Shrimp @ Dhs 47 is a best seller for a reason. The shrimps are extremely fresh, nicely battered with a crunchy texture.
That said, actually it’s the spicy sauce that takes the cake. Rich and savory with a spicy kick (even for Malaysian standard), the sauce coats the shrimps evenly without drowning it. My advice is not to leave the restaurant until you’ve tried this. 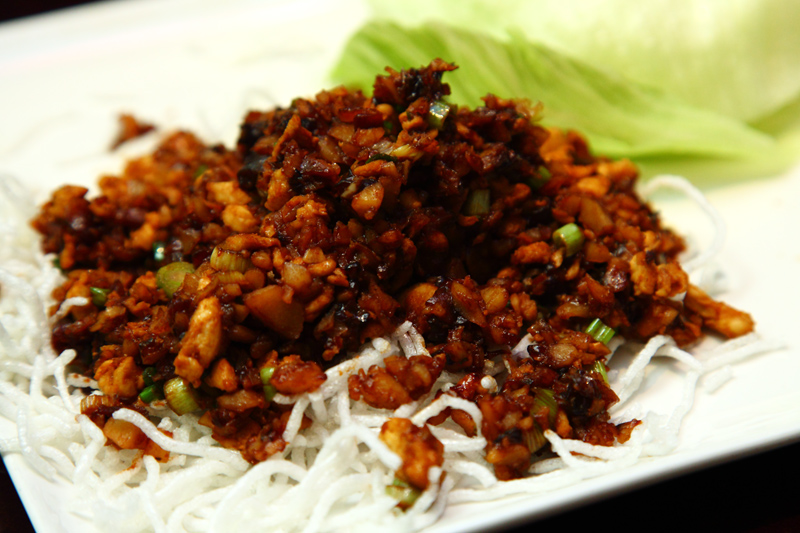 Chang’s Chicken Lettuce Wraps @ Dhs 44 is another popular appetizer here. It’s a stir fry of diced chicken, garlic, dried chilies and other spices that could be enjoyed on its own, or in a lettuce wrap. The flavor is good and all but I’d prefer the chicken pieces to be bigger than in tiny bits for a more satisfying bite. 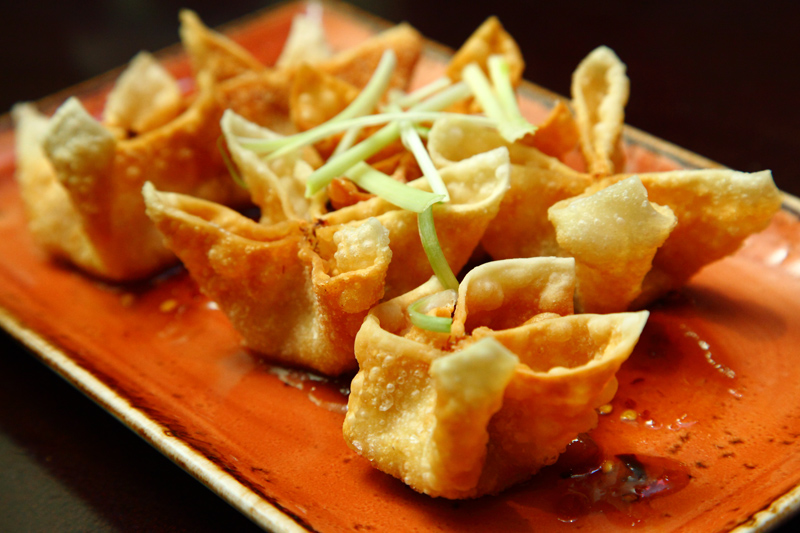 While I appreciated the succulent crab filling in these Crab Wontons @ Dhs 49, the skin left much to be desired because it tasted more like fried ravioli wrappers. As a result, the wontons taste crunchy instead of crispy. That’s not necessarily a bad thing but it could be an unaccustomed taste for us. 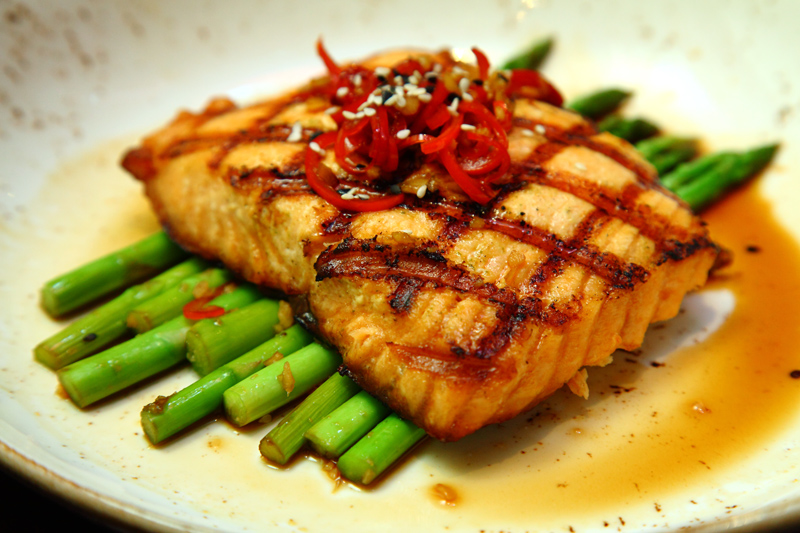 Despite its name, I wasn’t able to taste any lemongrass in the Lemongrass Salmon @ Dhs81. Anyway that did not really matter because the overall flavor was still great and I loved how well the salmon was seasoned.
However, the salmon was over cooked to well done even though we requested it to be prepared medium. Such a pity because otherwise it could have been great. On hindsight, I should have sent this back. 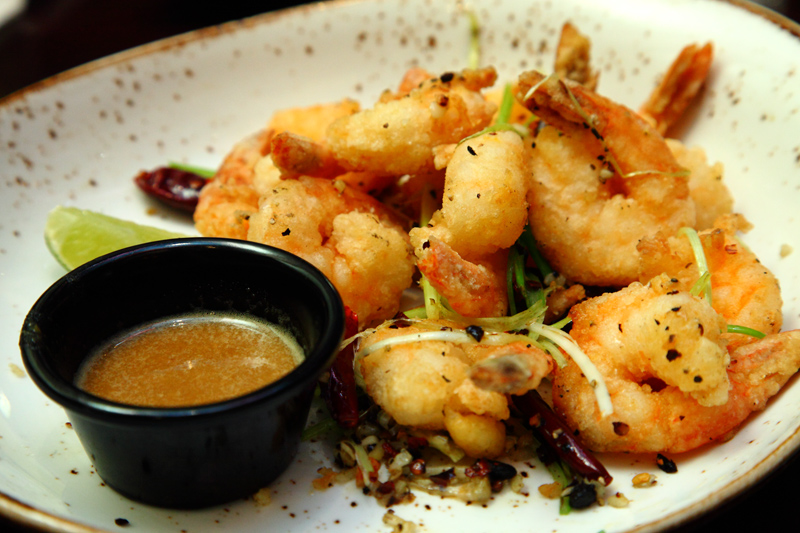 I was expecting the Salt & Pepper Prawns @ Dhs 83 to be stir-fried but it turned out to be batter fried instead. Nevertheless, it was still an enjoyable dish thanks to the freshness and quality of the prawns. Flavor wise I’d prefer it to have a heavier dose of pepper to make it more exciting. 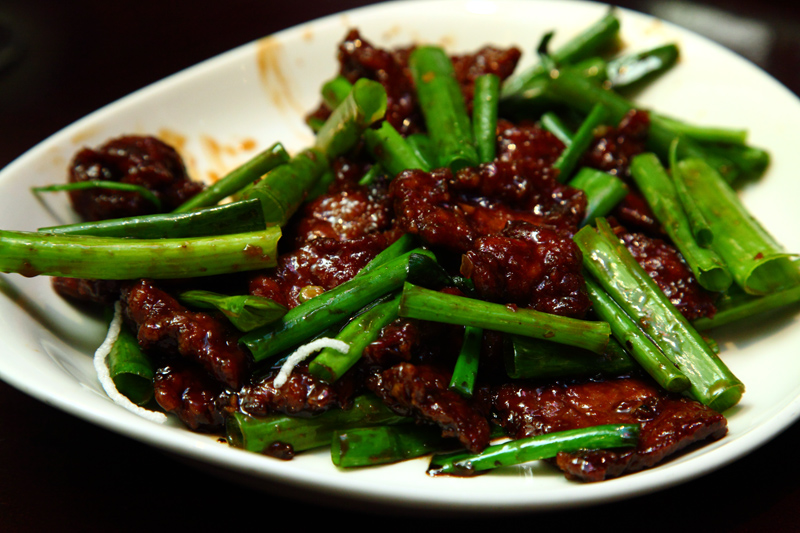 Like the salmon earlier, I find the the Mongolian Beef @ Dhs 71 to be over cooked as well so the meat felt a tad tough. But that is a small issue that I gladly overlooked because the dish was just delicious.
Just one thing though, this tasted more like a Guinness Stout style instead of the Mongolian style we are familiar with. Maybe this is how they have been preparing it back in the States. 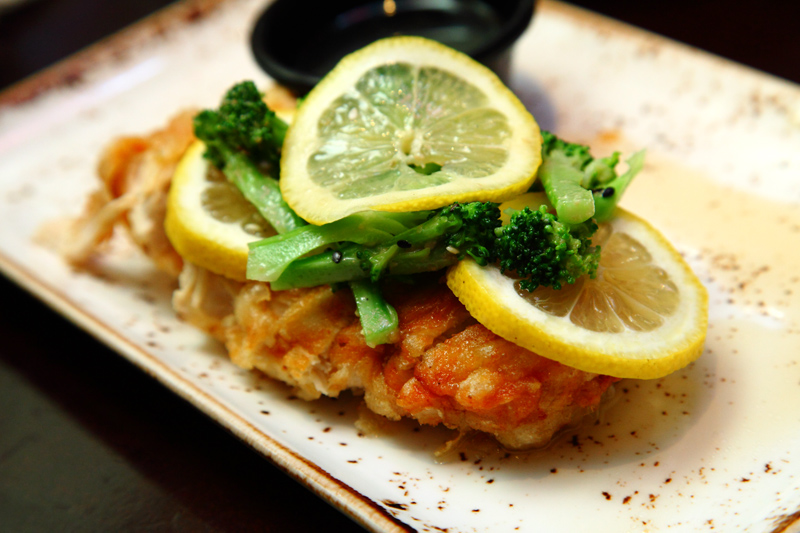 There are only a handful of chicken dishes to choose from and we decided to go for the Cantonese Lemon Chicken @ Dhs 57 primarily because it looked really good on the menu. True to its description, the seasoning is kept light yet with an unmistakable lemon flavour in every bite. I could only imagine how good this would be if they used chicken thigh instead. But that’s just me and I have always preferred thigh than anything else. 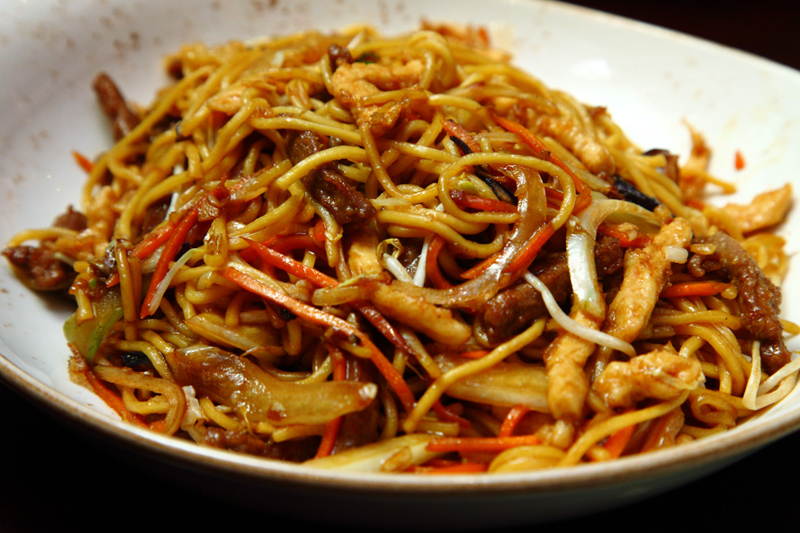 As in any Asian themed restaurant, rice and noodles are always available. I thought the Lo Mein @ Dhs 51 was tasty; albeit leaning towards sweetness and lacked ‘wok hei’. That said, just keep your expectations straight and think of this as a lightly stir-fried noodle instead of being wok fried and you won’t be disappointed. 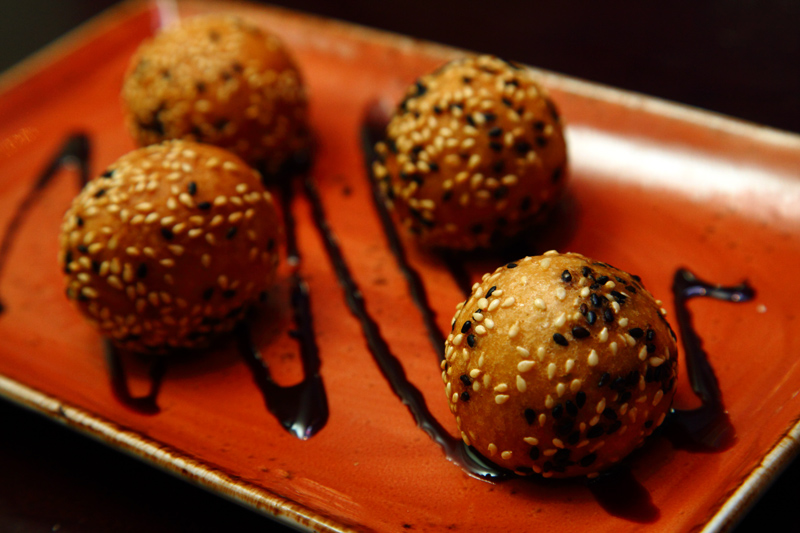 Desserts wise there’s nothing really Asian about them except for the Choco Buchi @ Dhs 35. These traditional sesame balls that usually contain lotus paste, peanuts or red bean paste are stuffed with Nutella for a touch of Western flair. If you’re wondering, the pairing certainly worked! 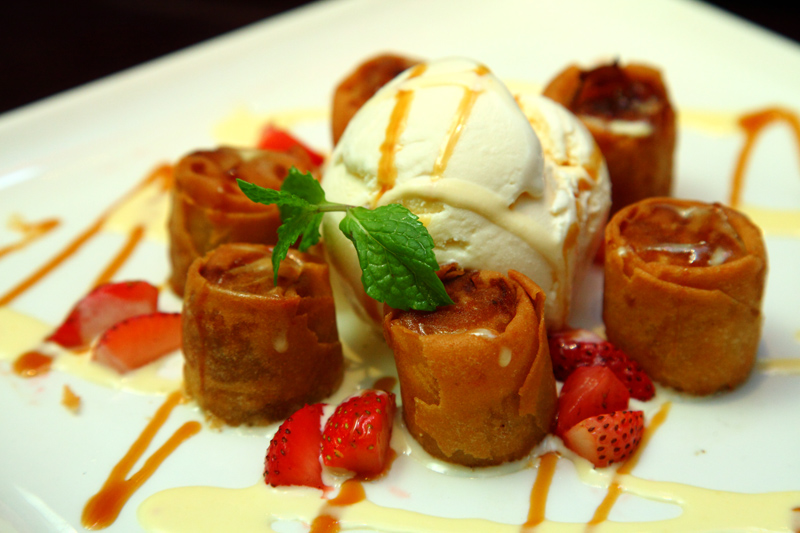 Another dessert we sampled was the Banana Spring Rolls @ Dhs 39. It tasted exactly like how you imagined it to be with nothing to fault – the fried banana was warm and crispy and contrasted nicely with the smooth and creamy vanilla ice cream at the center. 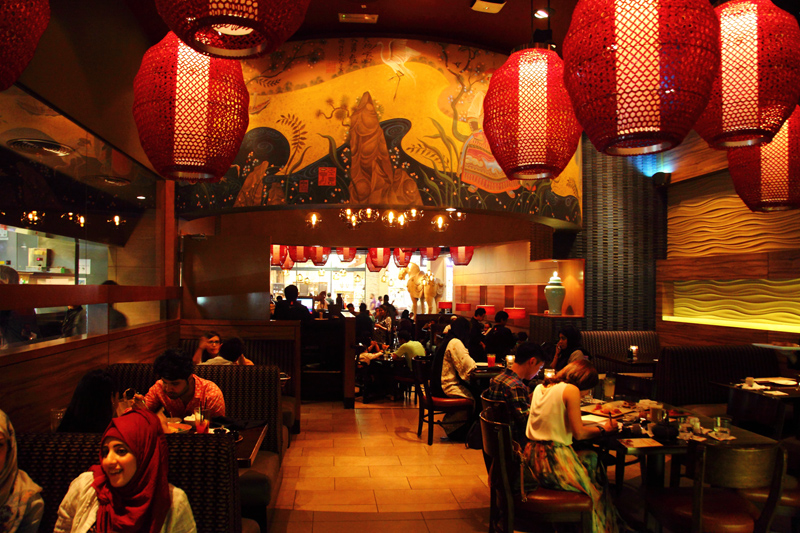 Surprisingly, P.F. Chang’s dishes are very suited to our taste buds so it’d be interesting to see their expansion into the Malaysian market (if it happens). I was pleased with the food’s presentation especially the fact that they are able to serve them like how they are depicted in the menu. Service was impeccable throughout the meal and our waitress was genuinely friendly and helpful without being over the top. 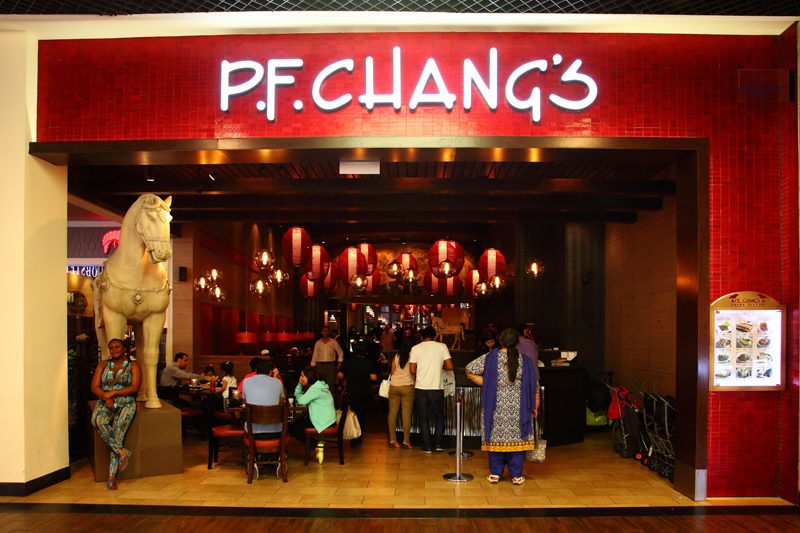