How did you celebrate your Christmas? Well, I kind of celebrated it over a shabu shabu meal at Restaurant Shabu Shabu located in Bandar Puteri Puchong. And since most of my friends have went back to hometown on the very day, I went alone. Sounds damn pity huh, lol. Even after blogging about food for three years, I have yet to really get used to all the glares and stares from other customers when they see me whipping out my camera and taking photos. And the fact that I was eating alone made it looked even weirder, lol. If you spot any poor soul armed with a camera (especially those eating alone), try not to look please. Probably just a food blogger trying to do his/her thing. Some things I like about Japanese shabu shabu are the hygienic concept of not having to share your boiling pot, and easy heat control just by using two buttons (either warm or cook)
But, the most interesting thing for me about this particular restaurant is the shabu shabu ingredients that go around on the conveyor belt. It’s like eating steamboat, sushi style. If you think plain soup is too boring, you can find ABC soup ingredients to be added into your soup. It comes on the belt too so keep an eye for it ok. To be honest, I didn’t really liked the condiment which combined sesame sauce, spring onion, sesame seed and fried onion in one. It just tastes weird for me.. or maybe I just need to eat more to get used to the it. The chili sauce was OK though. First thing that I took were crab, chicken, seafood and pork meatballs. And also some Ham Sui Kao (upper right) Oh, I need to clarify that they don’t come together in a plate shown above. I simply put three plates of ingredients into one to save the number of photos I need to show. Clever eh, lol. Fried items do not go around on the conveyor belt but delivered to you by the waiter in an interval of about fifteen minutes. The fried sui kao was very crispy, nice. And another fried item I took. I couldn’t tell what was the main ingredient as the taste was too vague.. sweet potato maybe? Sui Kao, chicken cheeseball (middle), prawn ball (orange colored) and crystal ball. I wouldn’t recommend the chicken cheeseball at all. Besides being nothing but a overly-processed food, my palate couldn’t detect any cheese in it, only black pepper. The purple thing at the background is another fried food. It was very similar to the previous one, just that it was fried with yam paste instead. Finally, time for some pricey and worthy food – the Thin Sliced Pork. You won’t find this on the belt. Like the fried food, it is carried around by the waiters and if you gotta wait about fifteen to twenty minutes for it. You can of course request the waiter to deliver a plate to you (hey it’s BUFFET style!) but this is where the dirty tactic employed by the restaurant kicks in.
Instead of informing the kitchen or delivering it to you immediately, the waiter would walk up and down dilly-dallying trying to make customers wait for it. It was definitely worth the wait though.. it cooks with just a few swipes in the boiling pot and had a very tender texture. A must try for the shabu shabu buffet. If not, you will feel sorry for your palate and your wallet as well, lol. Mutton slices. Again, this is not the normal serving because I have combined three portions into one. I think lamb is not that suitable for steamboat because its smell is quite strong. N.Z. mussel and some fish slices. The mussel was not cleaned properly and still had bits of shells in it. Because of that, I had to spit it out. Tell you what, the fresh prawns were even harder to come by than the thin sliced pork. Although it was listed as one of the items in the buffet menu, it was introduced randomly on the conveyor belt. No wonder I never found it, someone must have taken it before it could reach me, lol.
So, my suggestion if that you request it directly from the waiter. If you are wondering, yeah the waiter did do his thing of wandering around instead of giving the order to the kitchen. Anyway, I had him to deliver four portions (2 prawns each) to me which came about fifteen minutes later. The soup tasted so much nicer and flavorful by adding all of them. Lobster balls and scallop cakes. Some other things that I didn’t show include squid, fish balls, chicken meat, quail eggs etc.. those are some pretty normal stuff in a steamboat meal. Lastly, some of my favorite vegetable for steamboat – long cabbage or also known as celery cabbage. They taste super sweet if you add them at the end of the meal, when the soup becomes thick and flavorful. By the way, the plate of pork slices at the background was my second round, lol. How much for the buffet? RM26.50, the old price a few months ago was RM25 though. If you are a big eater and can afford to wait for the sliced pork and prawns, RM26.50 should be a good deal. The only major complaint I have is only about the dilly-dally attitude/tactic.
But still, I feel the experience and environment are the things that count. It is a good place for gathering with friends over a relaxing meal, especially if there is plenty to catch up. Restaurant Shabu Shabu is located next to Giant at Bandar Puteri Puchong. Or alternatively, you can look for Citibank because it is located only a few shops behind it. Reservation is encouraged if you planning to visit during the weekends. 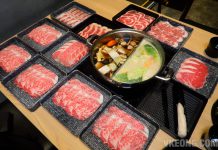