Pudu Plaza is the place to go whenever I need to service my camera. I always make it a point to go only in the morning because the traffic getting there could get really ugly after that. The newly renovated Pudu Plaza is surrounded with food and the great thing is most of them are within walking distance. We have always noticed this particularly busy stall called Restoran 168 but it was only last weekend that we finally decided to give it a try. Looking at the food they sell, they appear to be a jack of all trades serving curry mee, wantan mee, BBQ meat rice and even porridge. One thing is clear though, and that is their curry mee is the most popular dish here because almost everyone orders it. No wonder so many people like the curry mee here. Not only the portion (small @ RM4.50, large @ RM5) is generous, the are plenty of toppings (pork rind, brinjal, tau fu pok, green beans) as well and all of them taste very fresh. I don’t know where they source the french beans from but man, they are fat and crunchy alright.
And of course, cockles are always the star and my favorite part of curry mee. You can see how plump and bloody they are, freshly picked from the shells in the morning itself. As for the curry broth, it is thick and satisfying but personally I feel it could be spicier. Since Wantan Mee is sold here you should expect ‘sui gao’ (dumplings) too. Quite delicious if you ask me, definitely worth trying. As for the wantons, they are pretty small and only contain shrimp fillings. I guess you could skip this because they aren’t too spectacular, but fresh and crunchy nonetheless. **I only knew about Restoran 168 is actually very well-known after some Google-ing, they are also known as ‘Pudu Wantan Mee’ opposite SRJK Chong Fah Phit Chee. 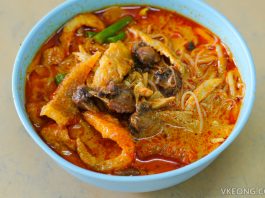 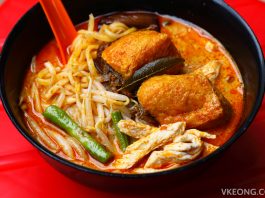 Kuala Lumpur July 6, 2017
ABOUT US
VKEONG.COM - Malaysia Food and Travel blog with reviews of restaurants, hawker and street food in KL, Penang, Melaka and beyond.
Contact us: vkeong@yahoo.com
FOLLOW US
© VKEONG.COM - All Rights Reserved